Oil went into free fall in mid-2014, experiencing a relentless bear move which saw oil price drop by over 70%. US shale producers turned out to be the tipping point in terms of the global supply glut. This, combined with a decrease in global demand, proved to be an unstoppable force that lasted for over a year.

The macro picture for oil seems relatively balanced for now, although there are violent swings in both directions. On one hand there is still abundant supply, especially since Iran production is back to normal and shale producers increase supply as they become profitable at higher prices. At low oil prices Saudi Arabia seem to be happy to keep supply at historically elevated levels, protecting market share while damaging other oil producers with higher extraction costs. On the other hand, geopolitical risks and decreasing rig counts provide solid price support when the price dips low. Oil bounced strongly from the sub-$30 lows, driven in part by a short squeeze. The market is well aware that oil prices in the $40s are not sustainable and that was clearly shown in 2016.

OPEC and non-OPEC countries have a clear interest in not allowing prices to dip too low for too long, and that’s been evident by their regular production cut agreements when conditions warrant them. This is a powerful message and it shows that they will not allow the market to be oversupplied for a prolonged period. US shale producers are offsetting this by increasing production as price rises and rig counts increase. The $40-$75 channel has held since mid-2016 and we are currently broadly in the middle of it.

Risks are now balanced on a macro level, with OPEC and non-OPEC countries always ready to cut production when supply seems to great; this, even despite US President Trump’s strong objection. However, the risk of a global economic downturn has increased dramatically since late 2018. Economic data from the Eurozone and the US have turned and the risk of a global recession is elevated. Equities and oil are usually well correlated with global economic performance, and market participants should always be aware of this important downward risk.

The recent pullback in crude oil didn’t come without warning. The crude market was setup for a nice rally as we passed through the $55.50 level with a long term inverted head and shoulder’s pattern setting up. However, there are a few issues that may stand in the way for bulls moving forward:

If you look at the daily crude oil chart below, you can see how the market managed to hold the neckline (or support zone) of the inverted head and shoulder’s pattern. And while above the $55 level, the risk remains higher. HOWEVER, one of the chart patterns which is most prone to failure is the head and shoulder’s (or inverted as well) and with the two points above, I think the risk of a failure is high. 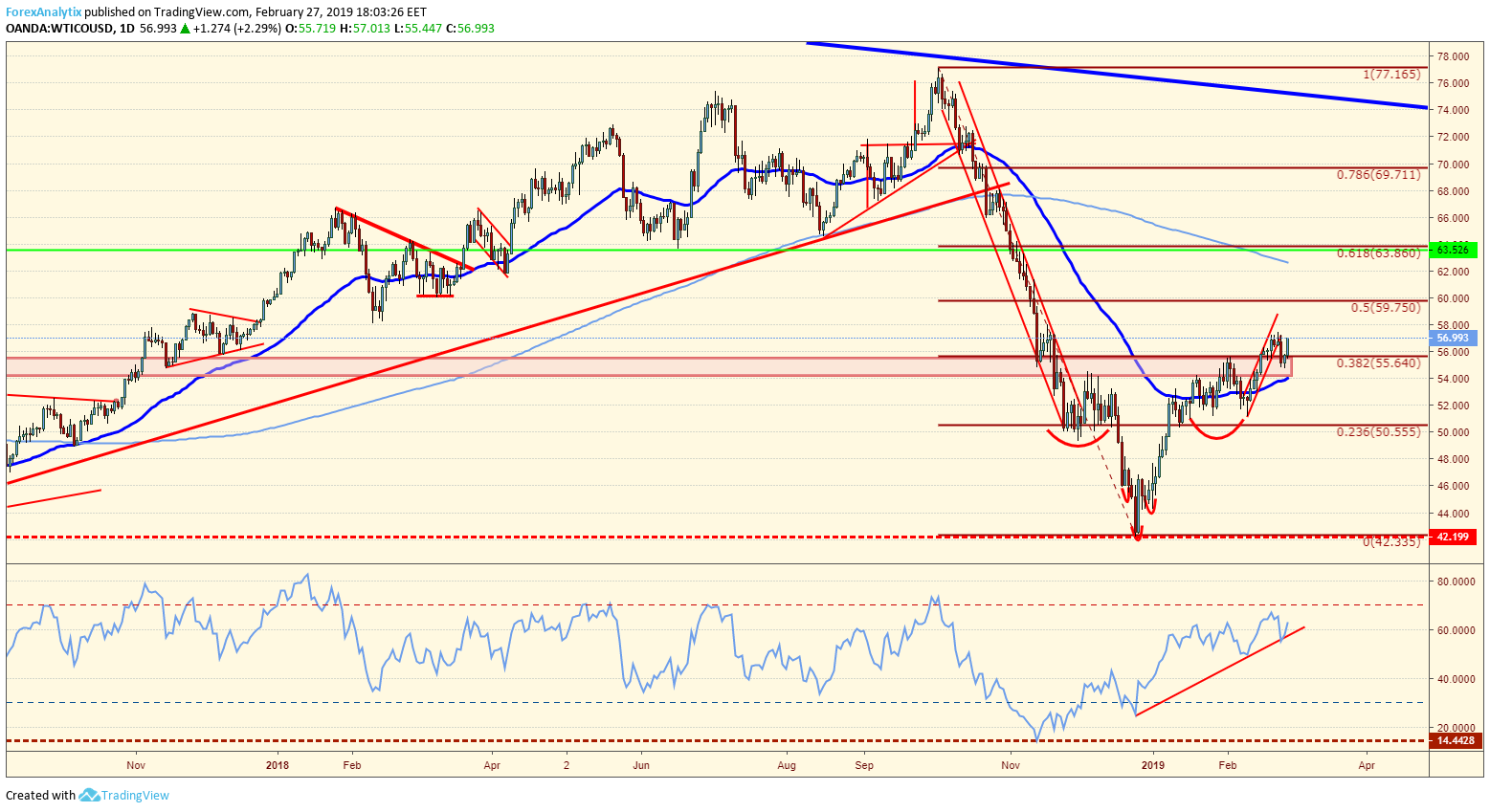 In the event we do get a price failure in crude prices (a move back below the $55 level) there are some closely related currency pairs that I would be paying attention to:

First, the USDCAD is the obvious pair. If you look at the USDCAD, we are near a long term channel support, which loosely could be seen as 1.3000, the big figure number. We are within close proximity of the 200dma and dips below have not been sustained for long since early 2018. 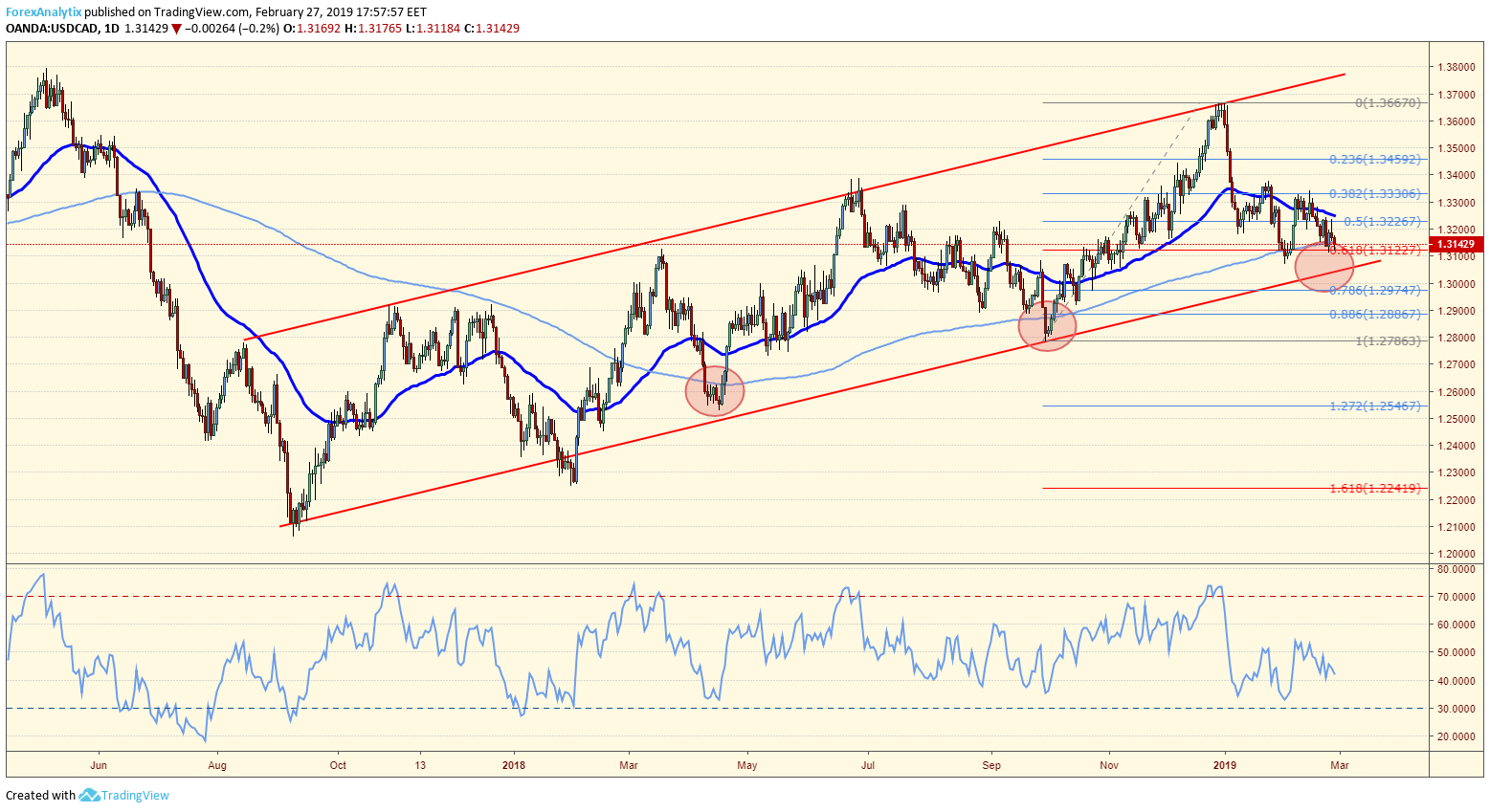 Secondly, the USDNOK is also a candidate for longs if crude oil prices fall. Like the USDCAD, we also have a longer term up channel in the USDNOK that is a little better defined, which means dips below the 8.5000 level could offer longs for that pair as well. 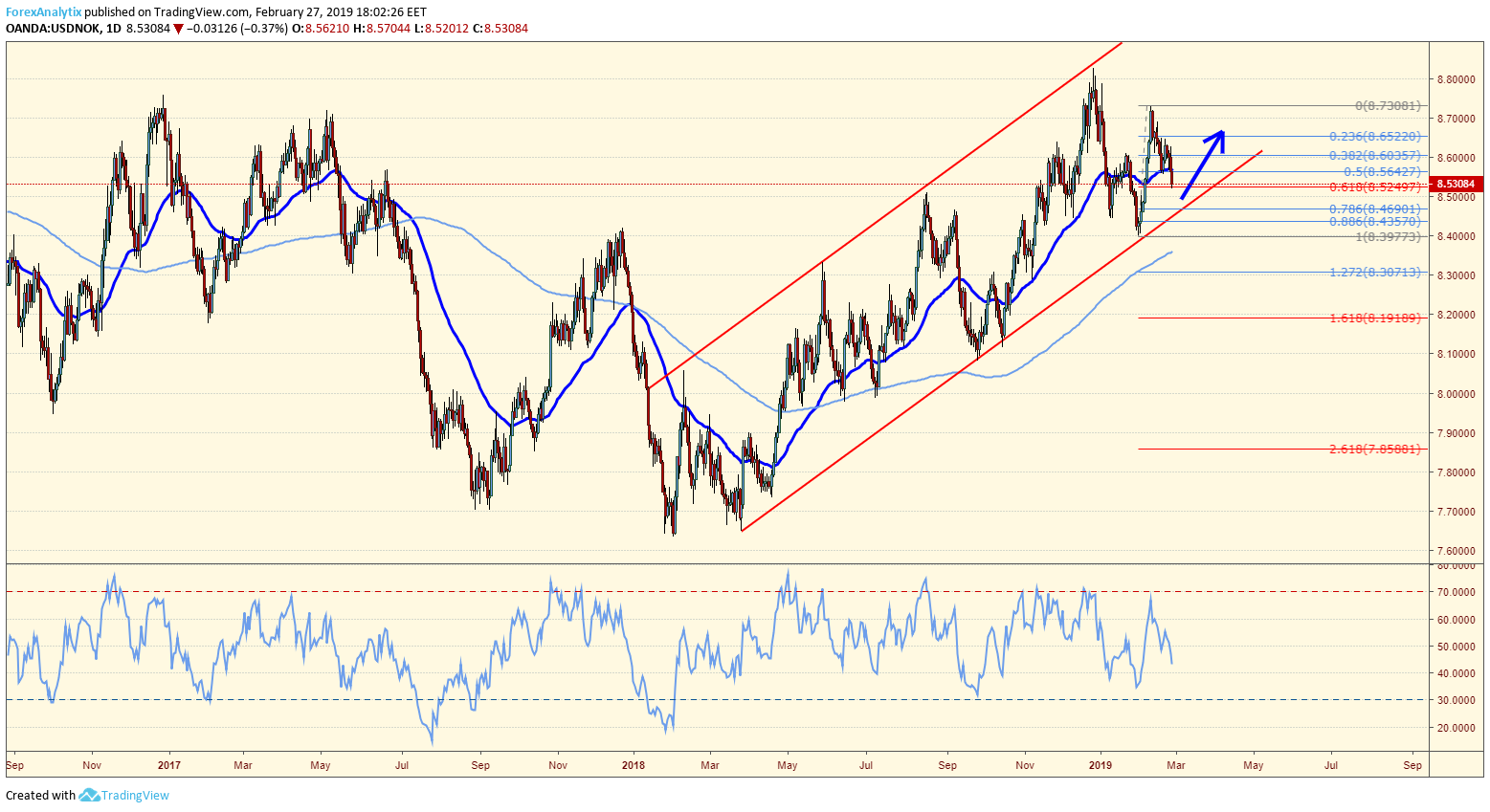 In the event that the crude inverted head and shoulder’s does play out higher, a break in the USDCAD below the 1.3000 level or USDNOK below the 8.4200 level may offer longer term trend reversals lower as well.

Weekly:
Eventual 5-0 bearish pattern at 59.66, above the most recent daily resistance now positioned at 57.45.
With the 200Ma now as support we should not ignore the potential for a retest of the previous and broken ascending channel, with the golden fib now at 63.83 – previous structure support, it’s now potential resistance.
Recovering above the monthly resistance at 77.06, one eventual bearish gartley pattern at 91.041.
The 61.8% fib as resistance last October 8th, used again later as support last December 24th suggesting the formation of the gartley pattern at 127% fib extension in the future.
Trading below the daily support and below the 200Ma will increase the probability to trade even lower, with the weekly and monthly support at 42.20 and with another eventual gartley pattern (bullish), on hold at 32.70. 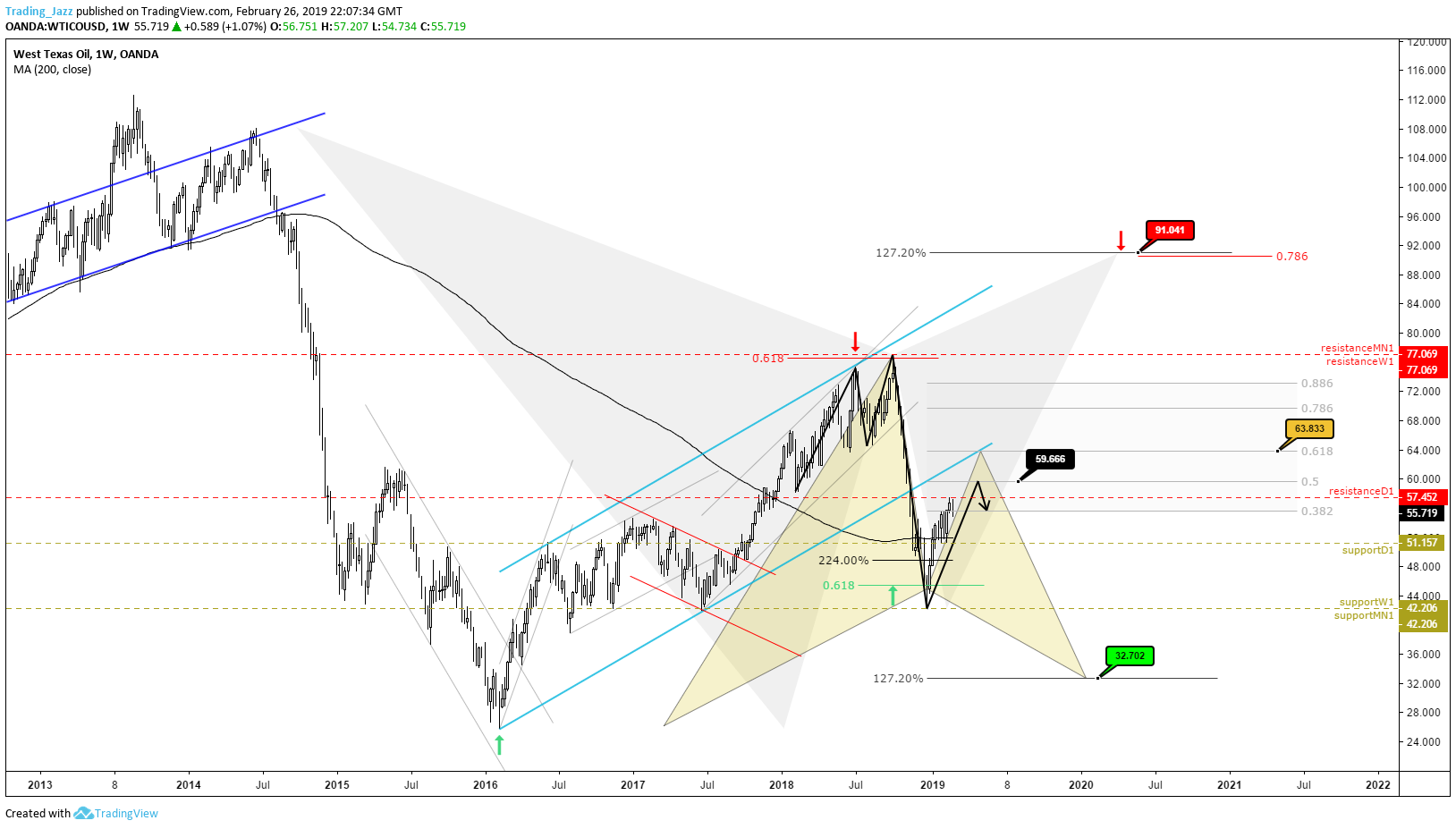 Daily:
The neck for the inverted head and shoulders pattern is now support, we have the daily resistance at 51.45 with support at 51.15.
The default projection for the pattern will put the price around 66.40, that will force the price to recover inside the broken ascending structure, increasing the probabilities to trade even higher.
We can also look to this structure as a megaphone formation, and a retest of the bottom of the structure may offer another bounce above and close to the daily support.
One cluster below the daily support between the golden fibs at 61.8% retracement and the 161.8% extension – the bullish shark pattern completion point, on hold at 47.28. 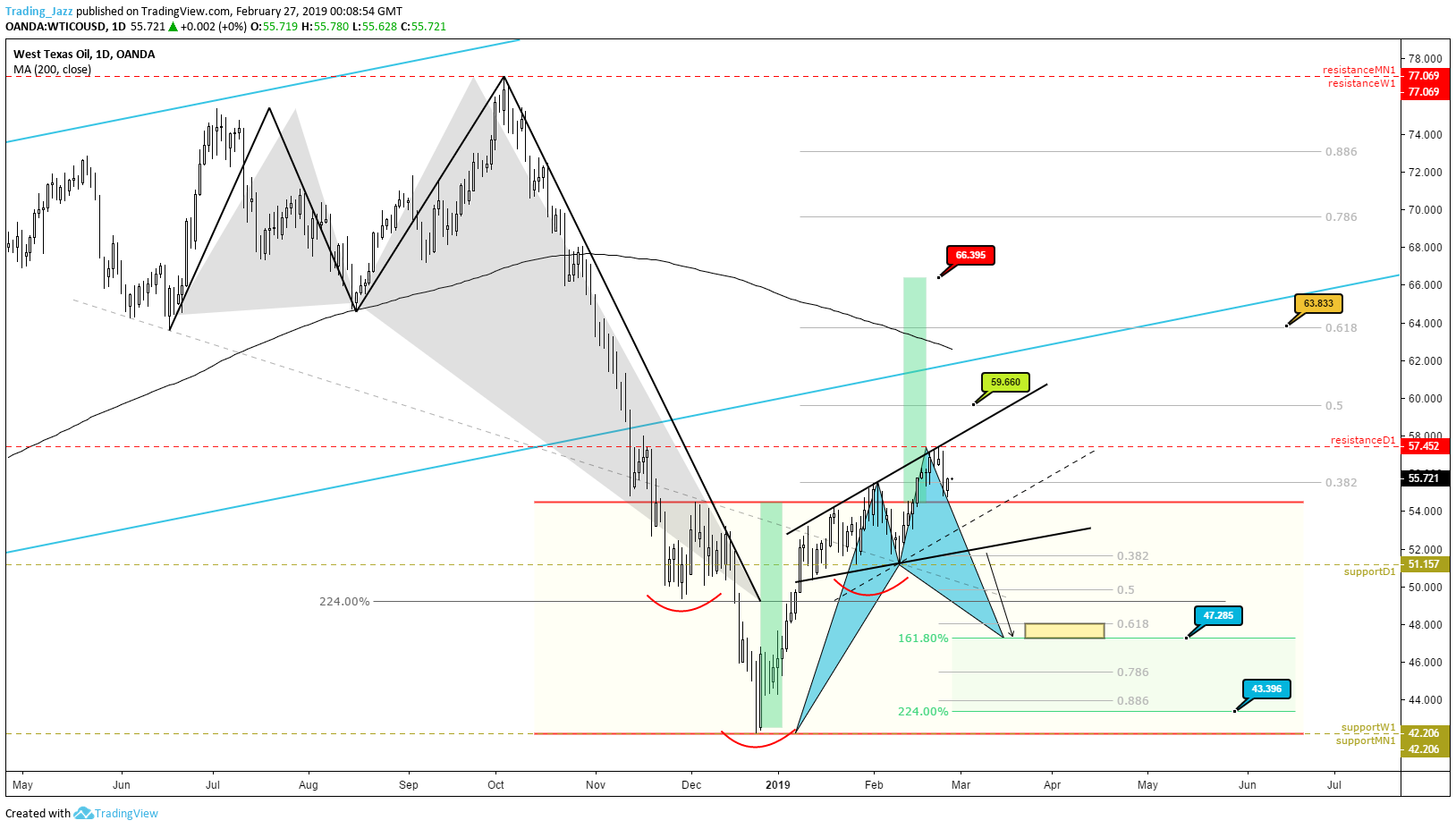 Elliot Wave Perspective: Oil On The Rise, But Corrective One

Crude oil is on the rise since end of December and so far, it has made only on clear wave to the upside, that I recognize it as wave A, first leg of a corrective advance that I am tracking in a higher degree of wave B. As you know, correction are three wave patterns so more upside is expected to occur after minor wave B set-back which can be around the corner. But generally speaking, any weakness can be temporary and limited around 52-54, especially because of tensions between Pakistan and India. That been said, we think that current trend since January remains up for now, and it may continue towards 60-63 where longer-trend trendline, former swing lows and 61.8% Fibonacci retracement level may  be a very important resistance for this year. 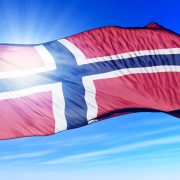 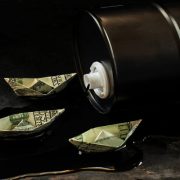