As BREXIT looms, the EUR/GBP may be signaling a reversal! - ForexAnalytix - Blog
Click here to open Help

As BREXIT looms, the EUR/GBP may be signaling a reversal!

You are here: Home / As BREXIT looms, the EUR/GBP may be signaling a reversal!

Since last year’s UK referendum, Sterling has been the subject of heated debate among market participants and observers. GBP volatility has remained elevated and moves have been knee-jerk to say the least. We are going to have a look at the EUR vs. GBP pair in particular, in an effort to make sense of what’s priced in and where it might be heading.

We looked at EURGBP in one of our previous posts – back in August 2016, when it was trading at 0.87 – and we pointed out that there was a strong potential for reversal. A lot has happened since then, with several of our original arguments having been confirmed: 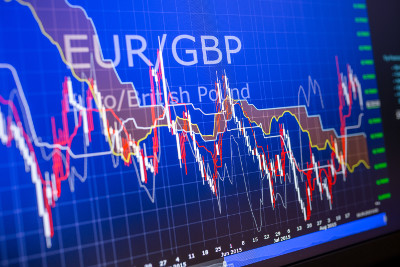 This puts the BoE in a tough spot, as they are running out of excuses to keep policy exceptionally loose. It’s becoming evident that the August 2016 rate cut & extra QE were probably premature and unnecessary. Even though the UK economy isn’t firing on all cylinders and Brexit-related uncertainty remains, the BoE could potentially embark upon a slow rate normalisation path without destabilising the economy. We are not dismissing the risks associated with Brexit – they are quite important – but we believe that the UK will probably come through in better shape than markets anticipate.

On the Euro side, we have also seen some decent economic data, although the majority has been confined to Germany. Nevertheless, just like with the UK, Eurozone GDP is stable and inflation is also creeping higher. However, the structural problems within the EZ remain and there are also a few big question marks casting a shadow over a potential recovery.

Firstly, the Greek headache is resurfacing as a fourth bailout is starting to look unavoidable. The can has been kicked a long way in the hope that it will somehow be forgotten; the truth is that Greece is in a worse state now than 2 years ago and more help will be needed. Unless this government (or a new government) makes proper reforms, Greece will remain the thorn in the Eurozone’s side for a while longer.

Secondly, we have the upcoming German elections in September. Angela Merkel’s CDU party has been steadily losing ground and recently fell behind the Social Democratic Party (SPD) for the first time in a decade. A shock win for the SPD could potentially destabilise the country, as the current government coalition has been in power for many years and has overseen a period of strong economic growth. Such a result would induce unwanted risk in a period of broad global uncertainty & volatility.

Thirdly and most importantly, the French elections are looming closer. Far right candidate Marine Le Pen is constantly gaining ground, as we witness yet another case where voters are fed up with old-style politicians & MSM. The two main left-wing candidates (Hamon and Melenchon) are considering launching a joint electoral bid, in an effort to find a way to prevent Le Pen from winning the elections. If this were to succeed, it would certainly be a big positive for the Eurozone and the EUR. However, there is a lot of uncertainty involved and even if the coalition was to materialise, a win would not be guaranteed. Momentum is clearly in Le Pen’s side as she continues to claw back the gap between her and the leading candidates. The bottom line is that with Trump’s win, we have seen how powerful a “protest vote” can be. A Le Pen win is a big danger for France & the Eurozone, and it cannot be dismissed as a low probability event as most market commentators seem to suggest.

For all the above reasons, on balance, the risk for EURGBP is firmly skewed on the downside from here, even after the subsequent fall from the post-UK referendum spike highs.

EUR/GBP was trading in a descending channel from the end of 2008 until med 2016. The break above the channel after a sharp impulsive move that started from its bottom was emphatic and the market kept rallying for another 4 months until it topped out in October just above 0.92 and the 78.6% retracement of the 7.5 year downtrend. The pair seems to be now forming a H&S pattern clearly visible both on the daily and the weekly charts.

The pair is now nearing the neckline of this formation and the risk is below the 0.8400 level opens a move towards the .8000 big figure, or perhaps the .7800 level, which is the 61.8% retracement of the lows of 2015 to the highs of the end of 2016. Keep in mind that the channel trend line of the previous channel is near the .7800 level which would be a tested of this down sloping trend line. The weekly RSI is sitting on support and close to breaking down too which could add to downside momentum longer term. 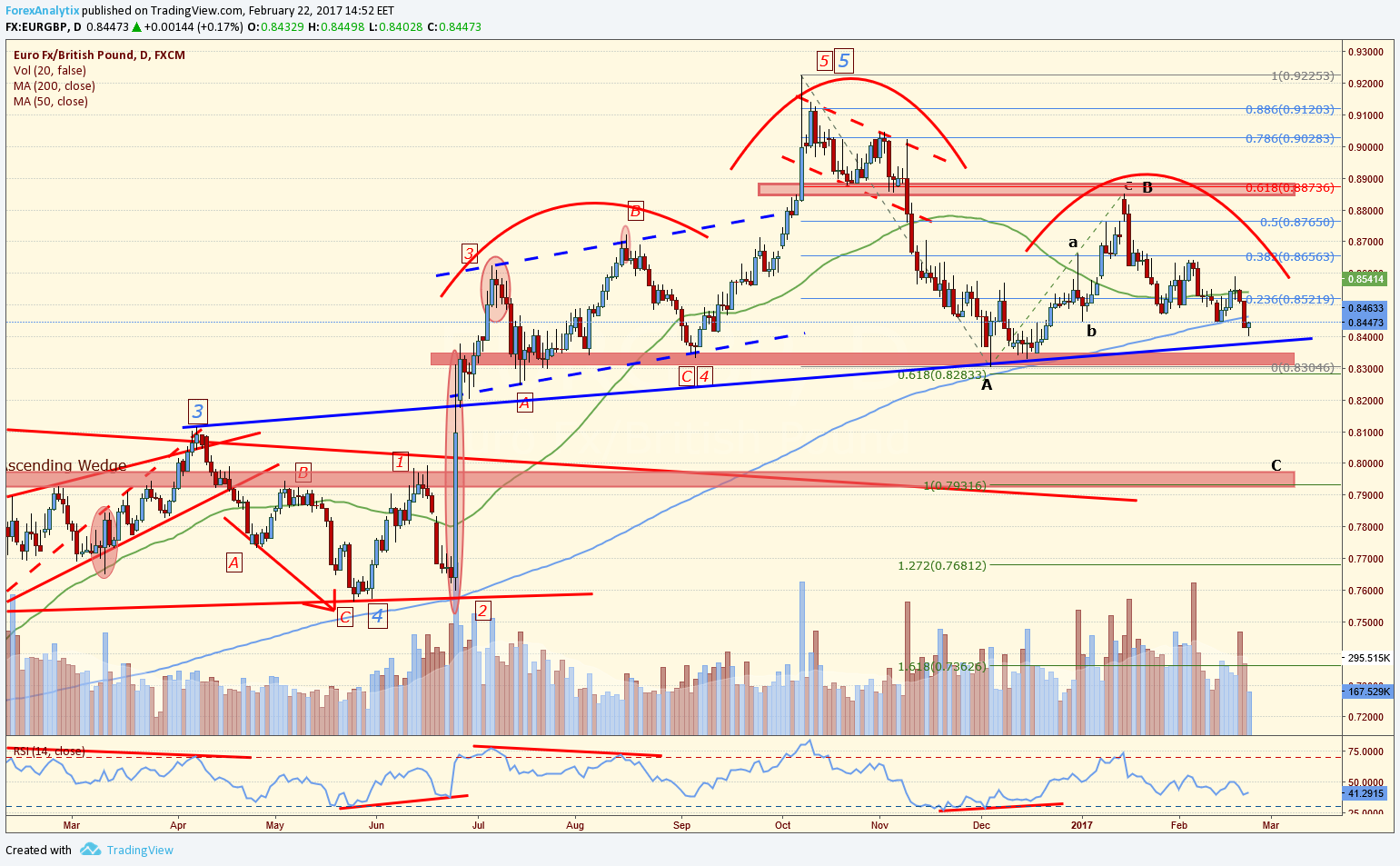 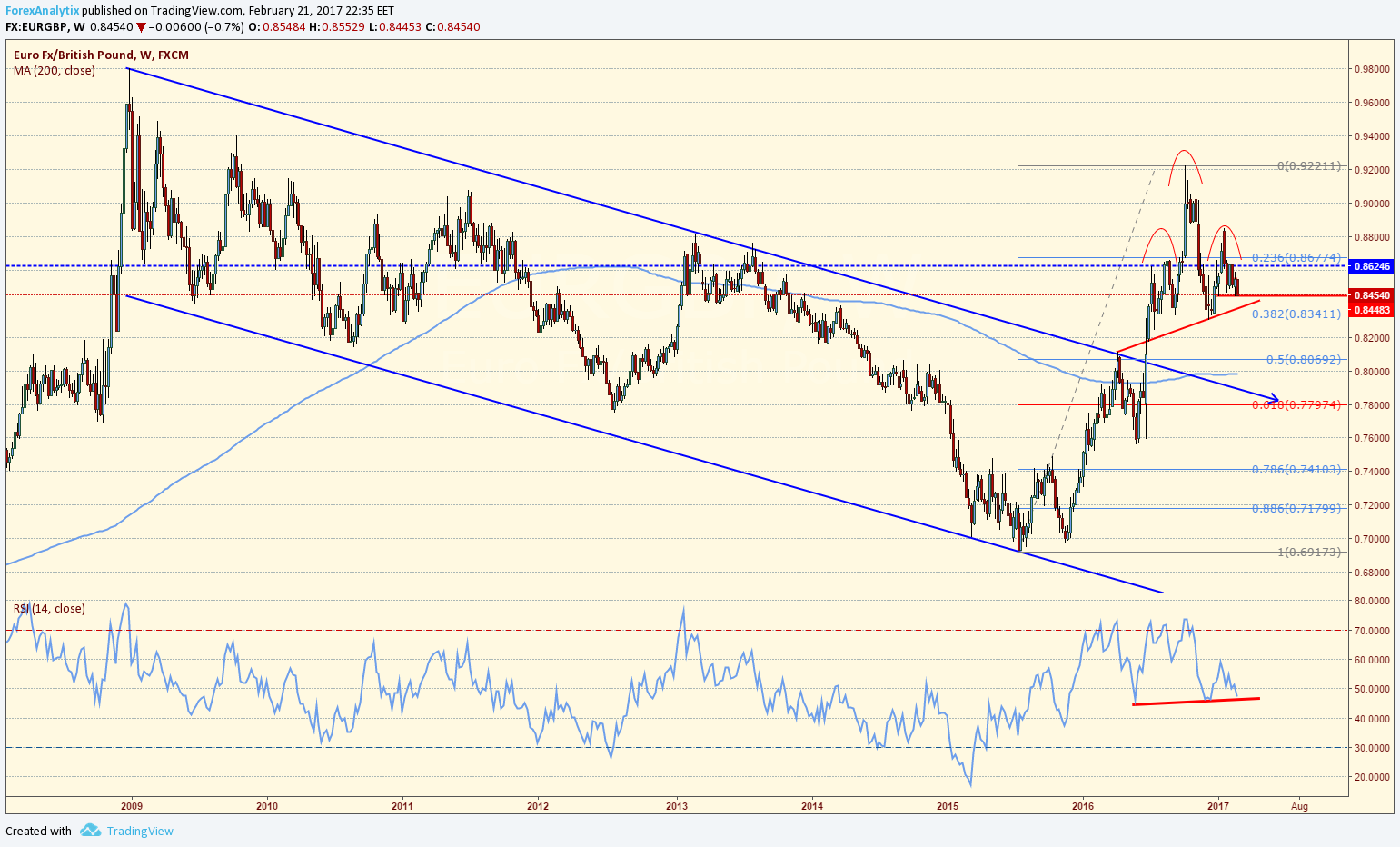 The weekly chart of EURGBP shows the decline from the 2009 low produced a rally to the 0.786 retrace level and previous highs at 0.9189.  Reversals at a 0.786 fibonacci usually return to the 0.386 retrace level next.  This means a return to 0.8030, the neckline of the inverted head and shoulders and the 200 week MA.  This is our preferred view.

The alternative harmonic pattern view is that the rally from the end of November was just the first wave of a two wave correction higher.  If this plays out then EURGBP will fail to trigger at the neckline and either the 0.886 retrace from the November low will hold as support at 0.83658 for another leg higher to 0.8900 or 0.9160. The alternative harmonic pattern is a drop to the 0.8216-0.8230 level where CD=0.618AB and a false break of the neckline which would provide momentum for another leg higher before lower. 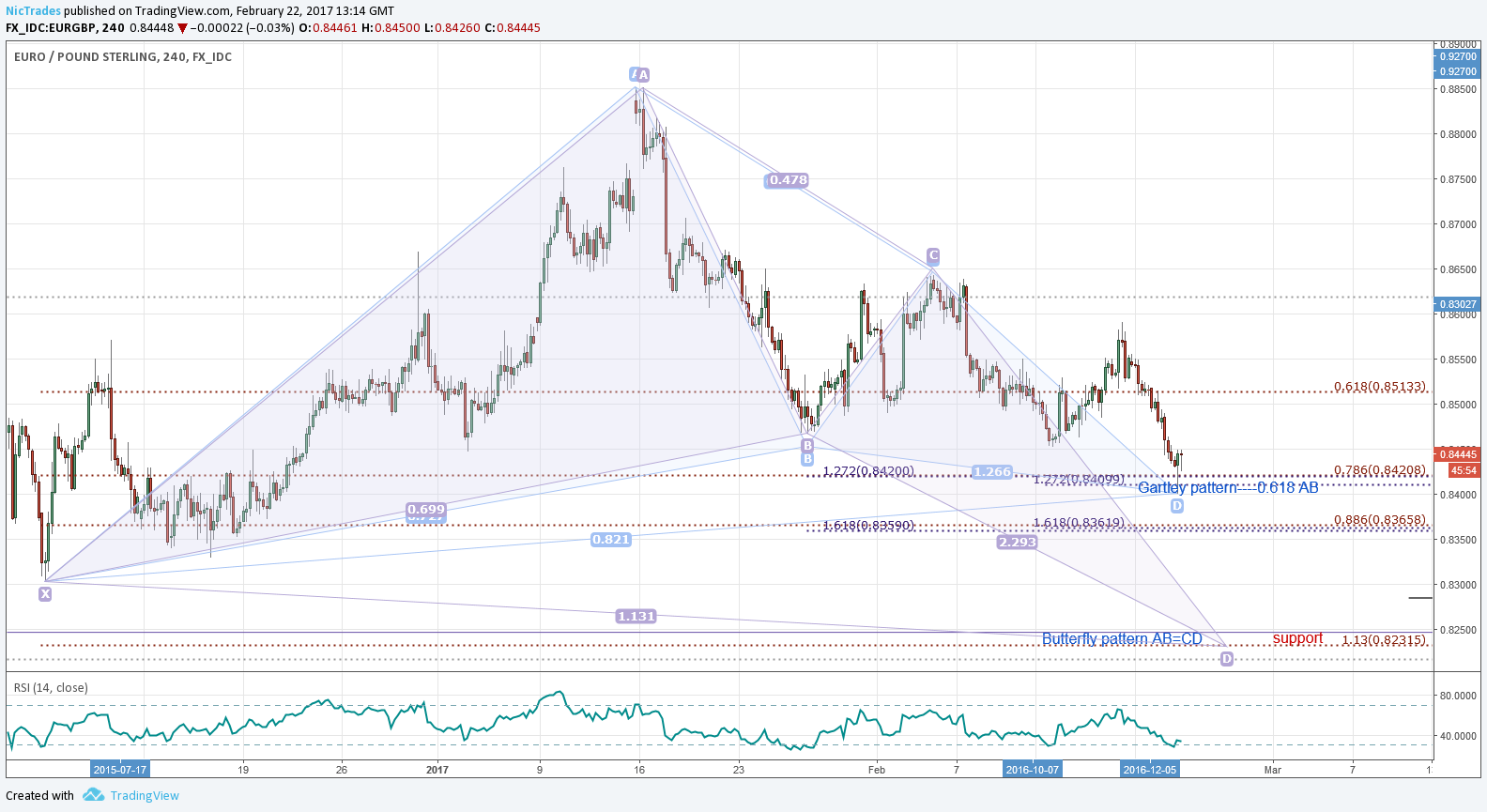 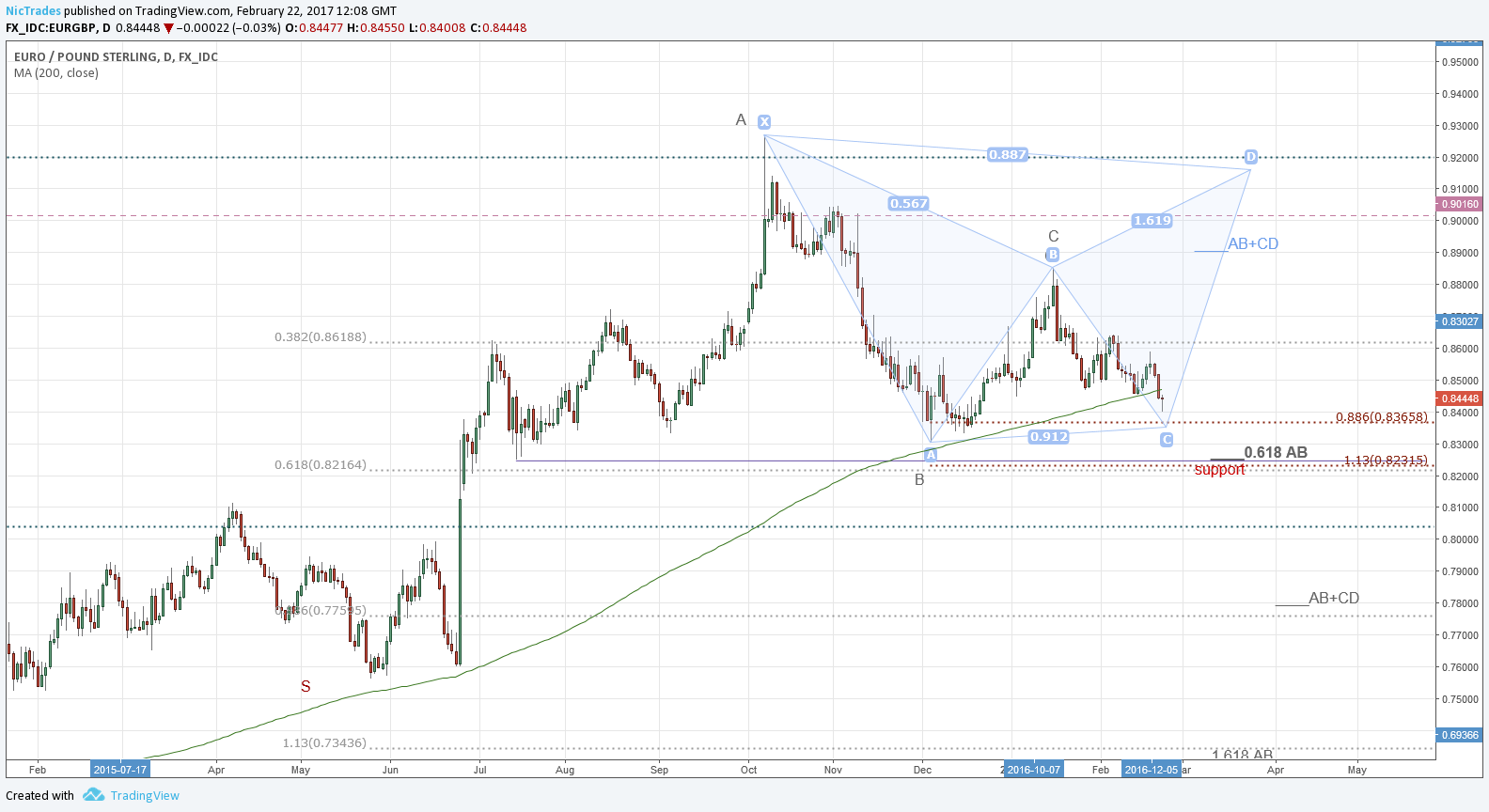 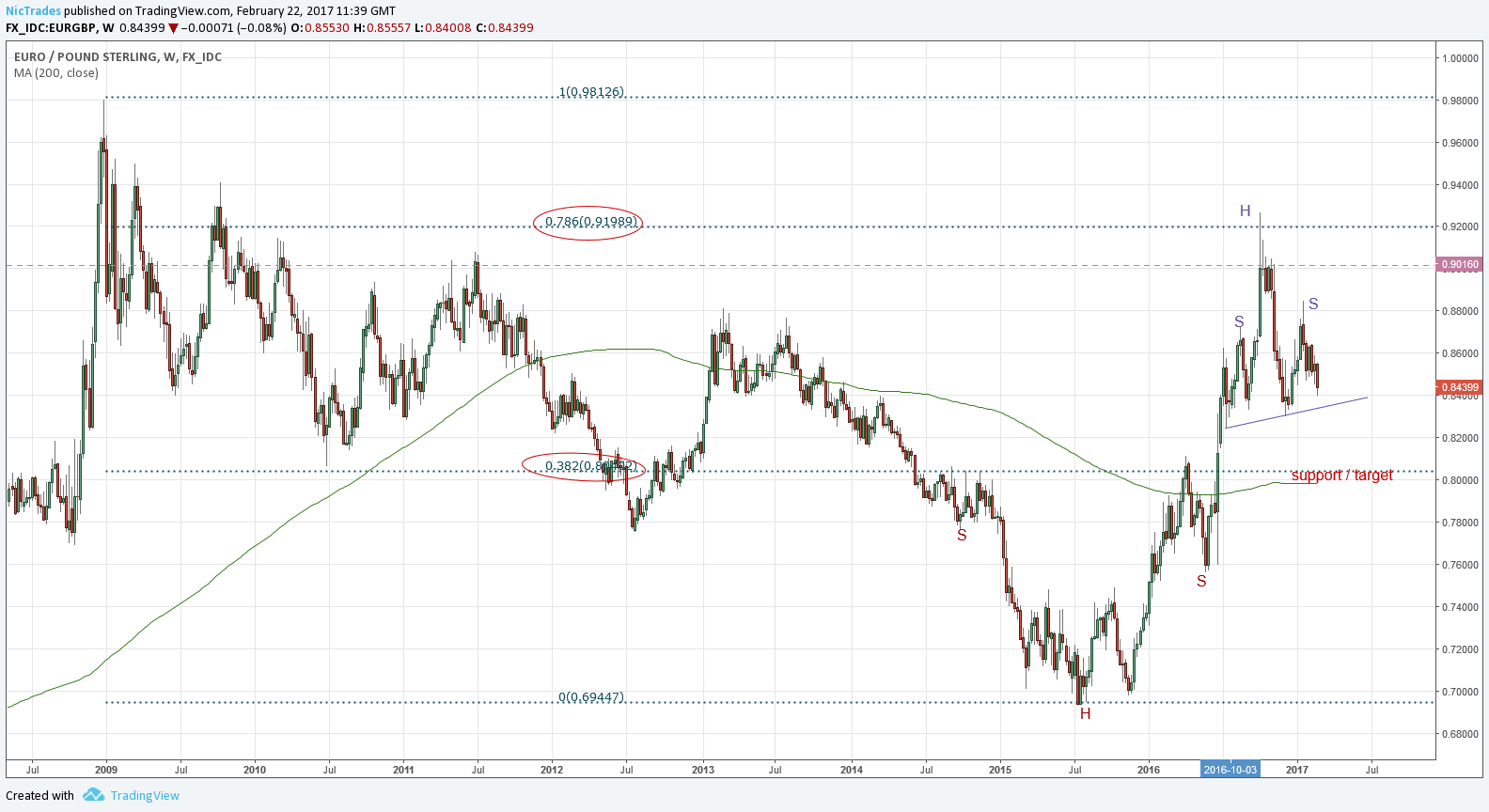 The most basic and simple pattern in Elliott Wave theory is an impulse; it’s a fast and strong move made by five waves where waves four and one must not overlap. Well, that was the case on EURGBP from 0.6930 up to 0.9613 high shown on weekly chart, where wave five had an extended structure, therefore it was consisted by smaller five legs. There are two things that are important when it comes to Elliott Wave; first is that after every five waves market will make a counter-trend move, meaning it will move into the opposite direction; in our case that is to the downside. The second thing and probably the most important one when it comes to my Elliott Wave approach is that every counter-trend reaction should be made by minimum three waves. In our example on a weekly chart that can be a simple zig-zag labeled with A-B-C letters from the highs. This is currently important because we do not see the downside move as finished yet, thus more weakness is expected. Theoretically speaking there is room for wave C to drop all the way down to 0.7555 to cover a similar distance with wave A, but it’s important to note that when the previous five wave rise has an extended fifth leg (black wave V in our case), price tends to retrace only to a starting point of that wave four (black wave IV) of the same degree and not to an ending point. To conclude, based on my minimum expectations I would not be surprised if the market would touch 0.8120.

Trading by the Rules

NZD technical picture turns down under!
Scroll to top