Is the CAD set to surprise to the upside? - ForexAnalytix - Blog
Click here to open Help

Is the CAD set to surprise to the upside?

You are here: Home / Is the CAD set to surprise to the upside?

Canada is an important G7 country with a quite particular economy. It’s a net exporter of energy and tends to be viewed by the market as an oil-dependent economy. As oil started to plunge in late 2014, the Canadian Dollar followed suit and weakened substantially – vs the USD it climbed from roughly parity to 1.35. If we look at the Canadian economy in detail, however, we’ll notice that the energy sector accounts for only ~3% of Canadian GDP. In fact, the service sector accounts for a very substantial 70% of GDP, while manufacturing is around 13-15% of GDP.

The Canadian economy has been relatively weak since the financial crisis, a common phenomenon among Western developed economies. Rates were slashed from over 4% to 0.5% in an attempt to stimulate the economy. The result has been sluggish growth, hovering around 0% with the last print being a disappointing –0.4%. The balance of trade has turned negative since 2008 (-$4bn last reading) and the Govt Debt/GDP ratio has grown from 70% to over 90% of GDP.

On the positive side, quarterly inflation has been slowly rising and is now consistently between 1%-2%. This sits well with the central bank of Canada’s 2% target and broad 1%-3% targeted range. Unemployment has also been at stable healthy levels between 6.5%-7%. Crucially though, Canada has found a figurehead of stability in Justin Trudeau. He is globally acknowledged as one of the most capable and forward-thinking western leaders. This will likely prove to be vital for Canada, given that its biggest trading partner (the US) now has a new and potentially unpredictable president. Long-standing agreements such as the NAFTA have been beneficial for all sides and it’s imperative for Canada to maintain the smooth political & trading relationship that they have with the United States.

What does the big picture tell us about Canada and the Canadian Dollar for the medium term? It’s certainly not clear but it’s likely that Canada is well equipped to weather economic downturns and global uncertainty. As oil & commodities continue their recovery the Canadian Dollar should strengthen and outperform. Due to its solid fundamentals and with increasing global inflation, Canada should be able to remove the current highly accommodative monetary policy with greater ease compared to other major economies.

The USD/CAD had been in a relentless uptrend that started during the summer of 2011 and peaked during the first days of 2016. Looking at the weekly chart we can see that the acceleration of the uptrend took place exactly 3 years ago and the pair has since respected the depicted Andrew’s pitchfork (weekly chart). Inspecting the move lower (from the 1.47 high to 1.2460) on the daily chart we can clearly see that it has impulsive characteristics but the move higher that has followed since (started in May this year) seems more like corrective in nature than anything else. This bullish leg was respecting a clear structure (red ascending triangle) until a few weeks ago when it finally managed to break above. Despite this bullish development 3 facts are troubling for the bulls: a) the inability of the loonie to accelerate higher following such a break, b) the fact that it has formed another udnerlying pattern (blue ascending wedge) which is not considered a bullish pattern and c) that the 50% Fib has rejected (for the time-being) this move while the CAD has been one of the best performing currencies against the USD during the past week.  There is no denying that as long as the pair remains above 1.3250, the M/T trend has to be considered up but in my opinion as long as it trades below the 61.8% retracement (1.3840) there is a good case to be made for a resumption (in essence a 2nd leg) of the downtrend. 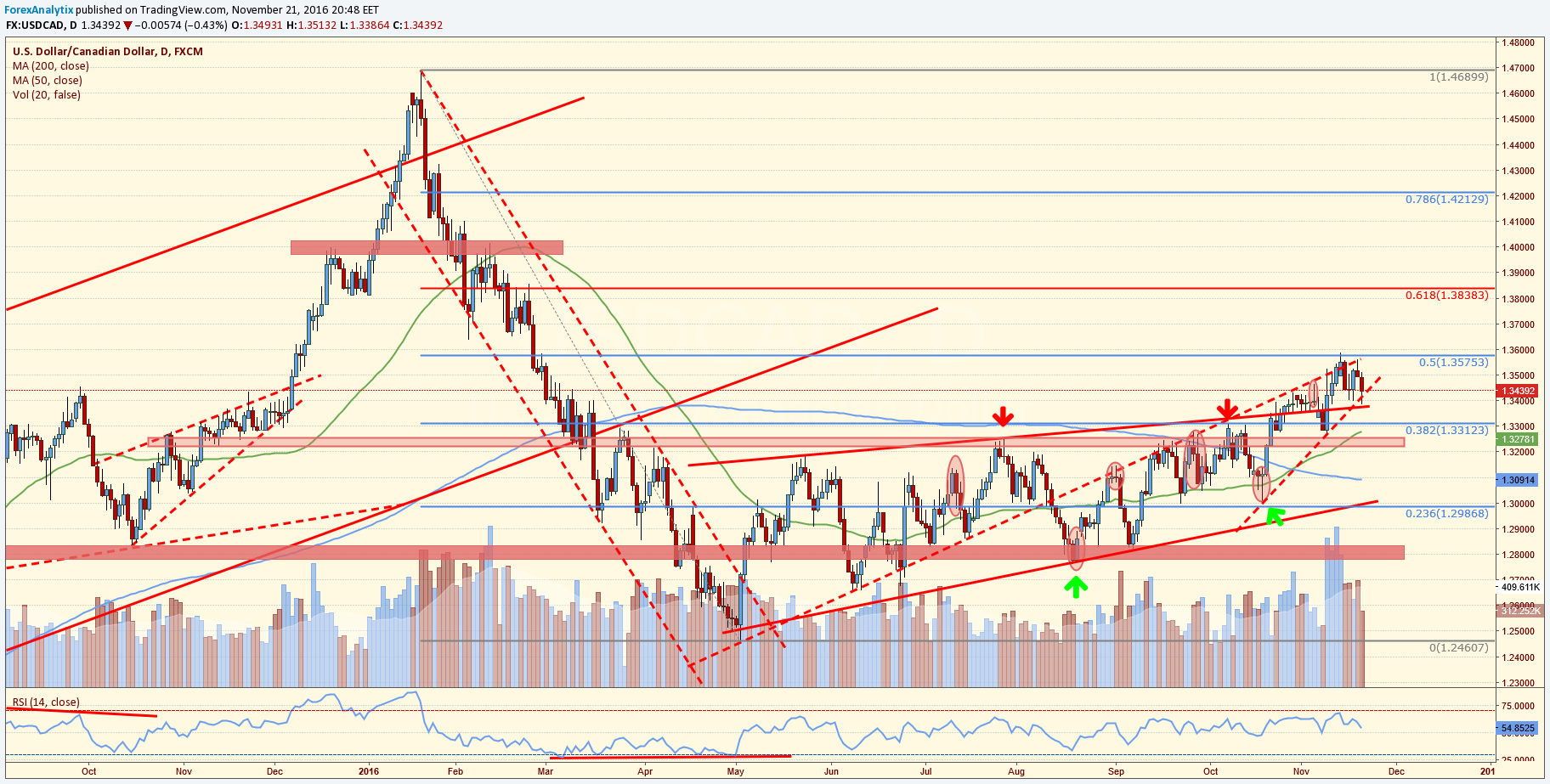 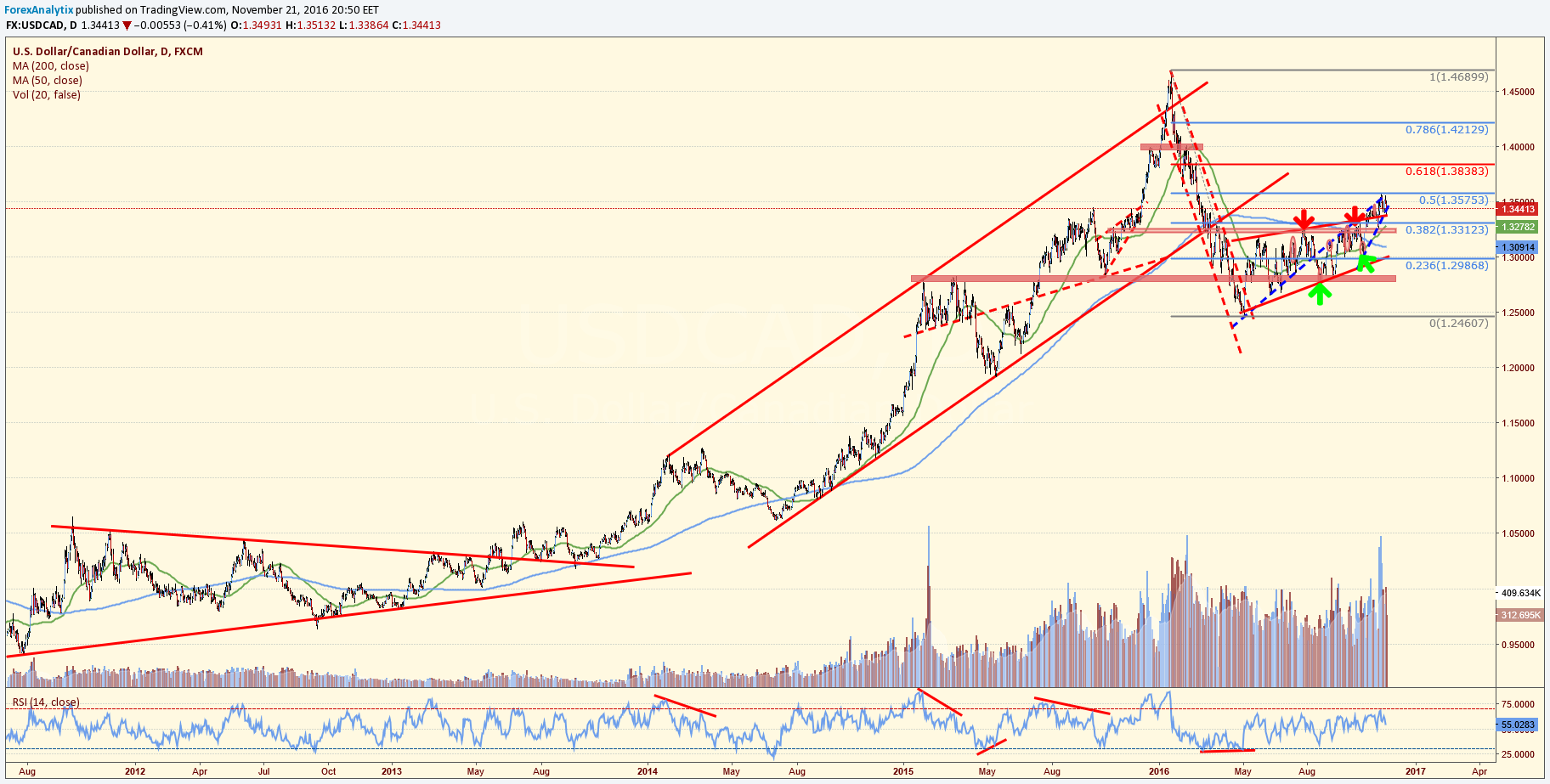 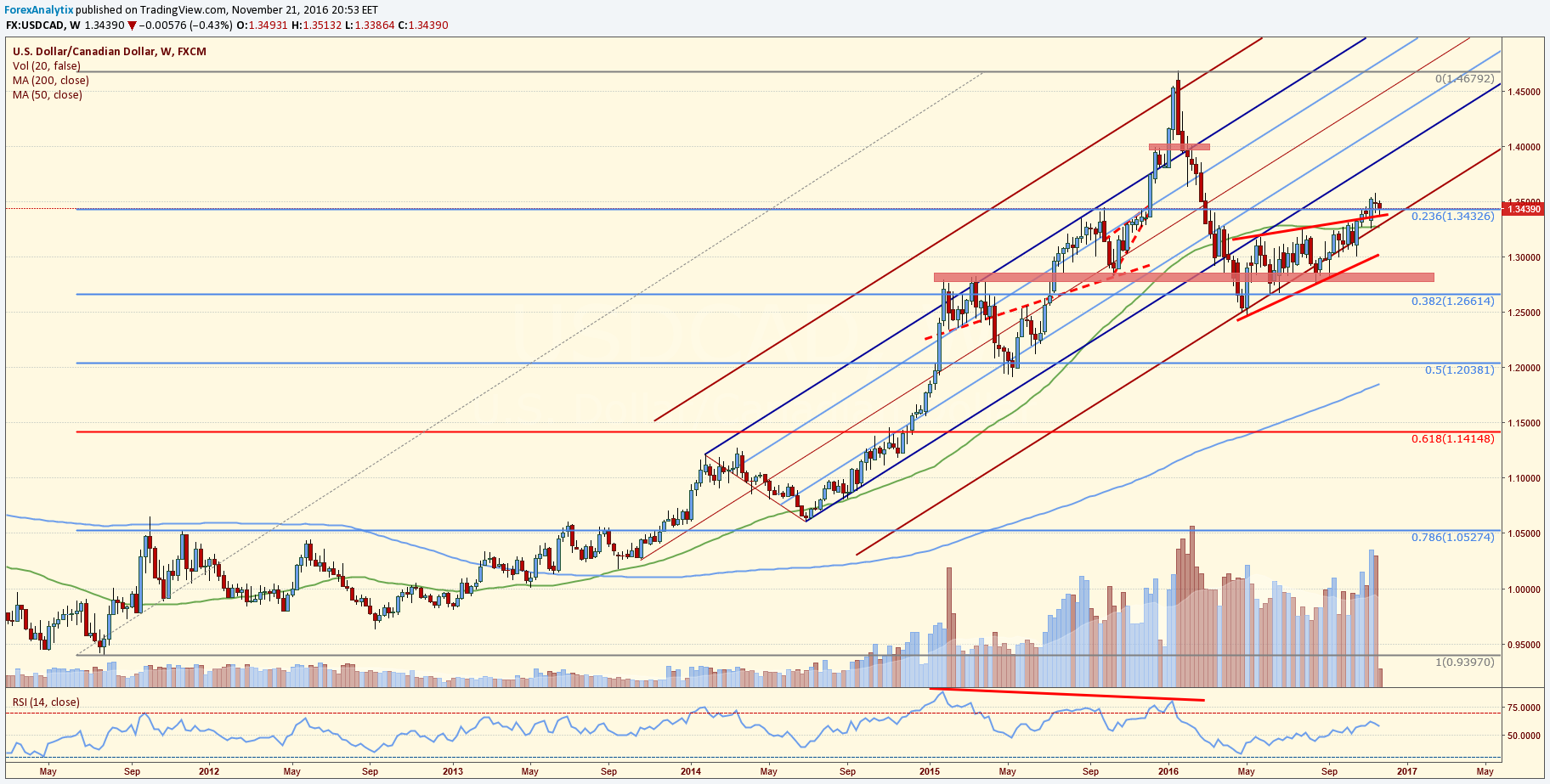 Since the 2009 low the Canadian Dollar has performed the weakest Vs the New Zealand Dollar and has the best risk reward for a reversal of fortune for the CAD.  The monthly chart shows how since 2015 we have been consolidating and trying to reverse at the 2004 highs at 0.938 and making a wedge pattern.  Just above the consolidation we had a wall of Fibonacci projections at 0.9800.  The weekly chart shows that when the wedge finally broke to the upside it hit this wall of resistance and sharply reversed since the election, making this a false breakout and a perfect bearish ABCD pattern. AB=CD measured moves are usually corrective not impulsive so this is bearish. False break outs are powerful reversal signals and the monthly trend reversal will be confirmed on a break back below 0.9035 (the 0.236 Fibonacci retrace of the entire rally from the 2009 low) and I like selling bounces in this pair against the November highs with a target of 0.8040. The AUDCAD weekly chart shows similar ABCD measured move higher which is corrective and another leg lower targets 0.8830. Looking for an entry, bounces back to 0.9924 and 1.0105 could provide good opportunities. 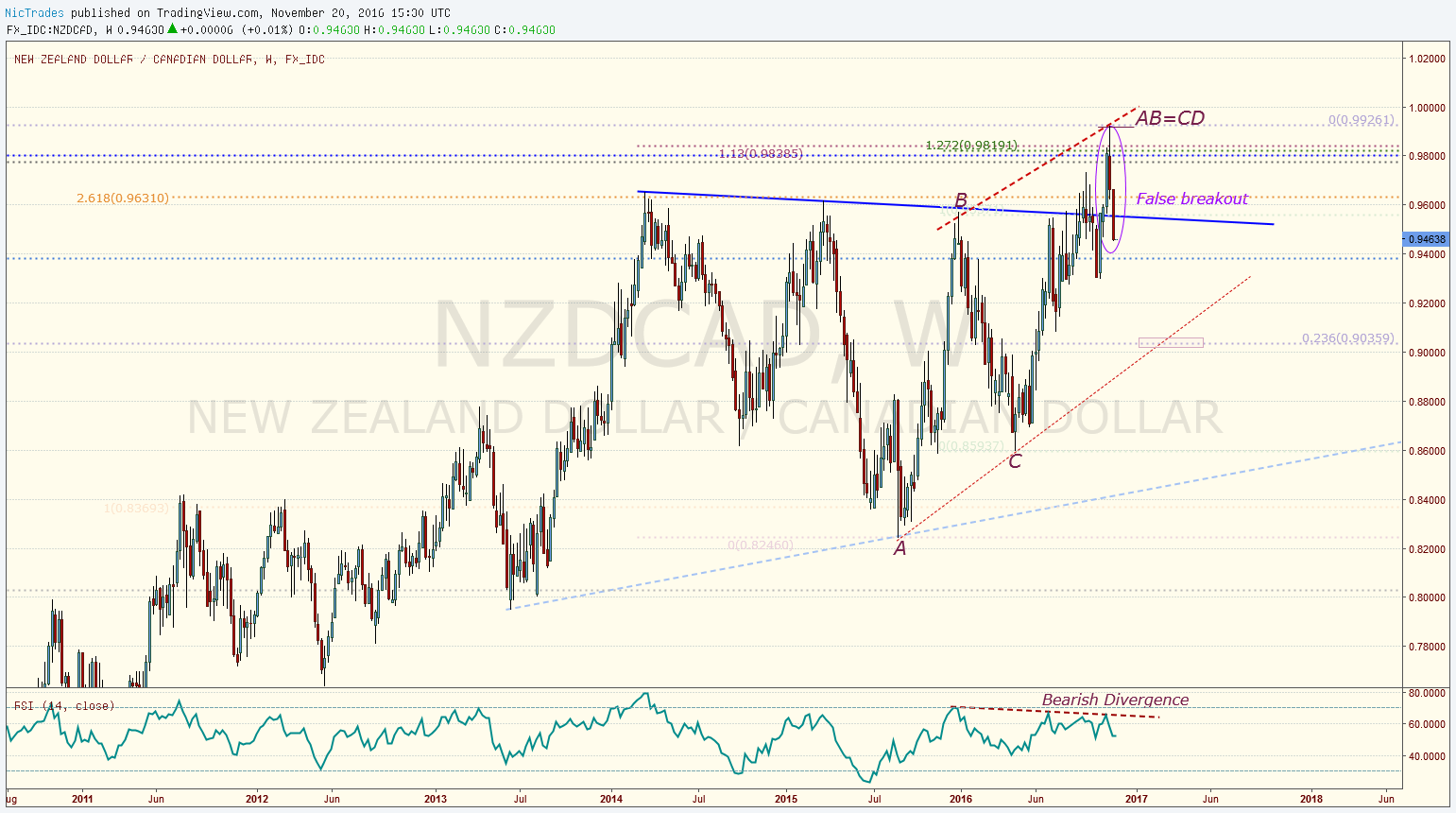 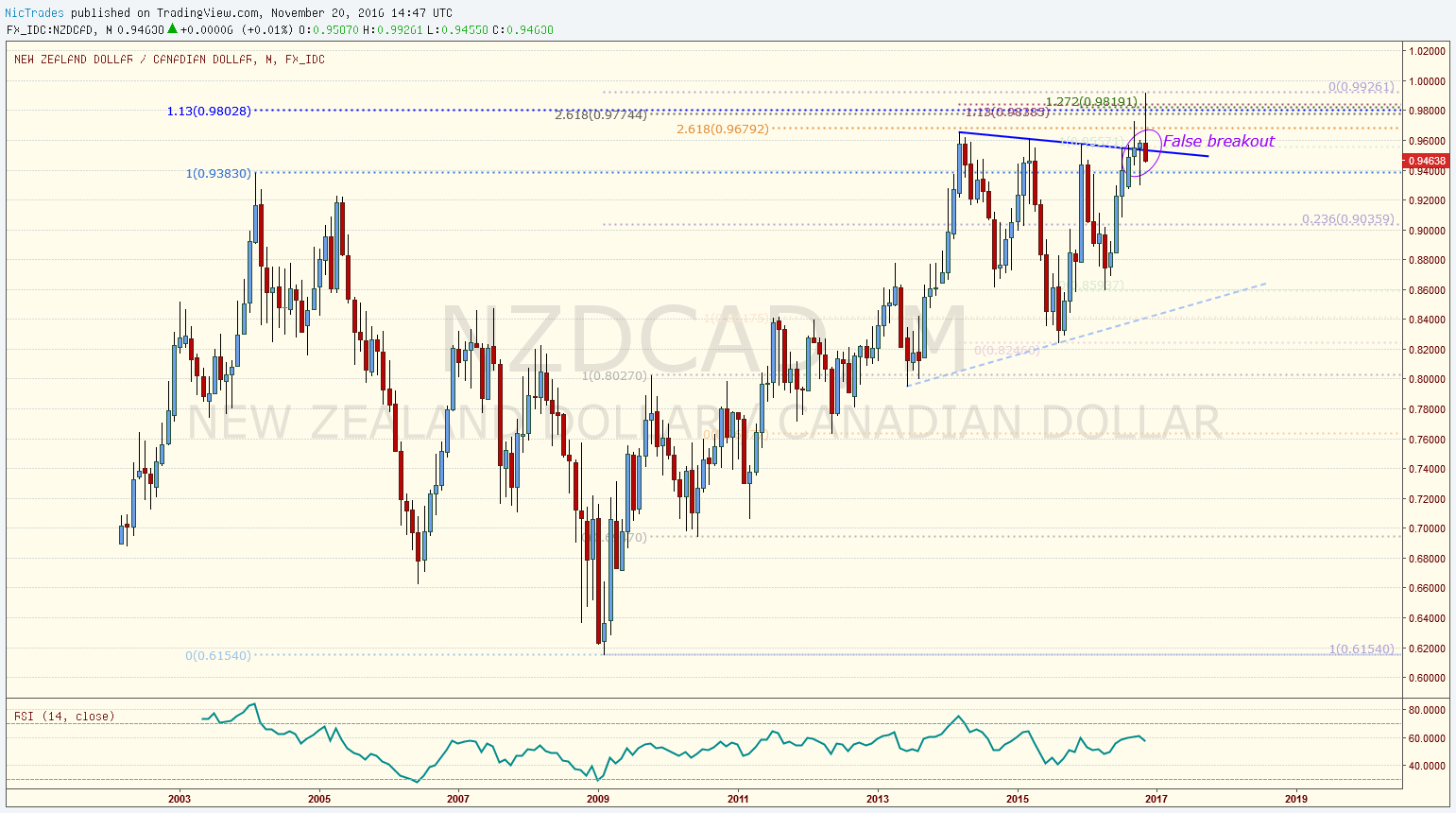 USDCAD has made a five wave decline from the 1.4683 high, which is very strong evidence of a bearish trend. We are talking about black wave A/I, the first wave of this big new bearish cycle, followed by the current slow and overlapping price movement that is either wave B of C or II of V, it remains to be seen. We know that sooner or later the downtrend will resume, but the question is where this new leg lower begins from. Well, based on recent price developments we see the pair trading up, but most likely is in the final stages of blue leg C, which is expected to accomplish a higher degree correction, expected to peak at the 1.3600-1.3800 area. Further evidence is found on the weekly chart where a big bearish H&S pattern is clearly visible, suggesting that we are close to a new turn lower.