After many months of speculation, OPEC finally delivered. Member countries agreed in principle to control oil production for the first time in several years. Production was agreed to be cut by around 1.2 million barrels a day, by January 2017.

It was a bumpy road and the agreement certainly didn’t come easy. The three main producers (Saudi Arabia, Iraq and Iran) had to overcome significant obstacles and made compromises in order to achieve their goal. There was even some drama as Indonesia requested a freeze of its OPEC membership. 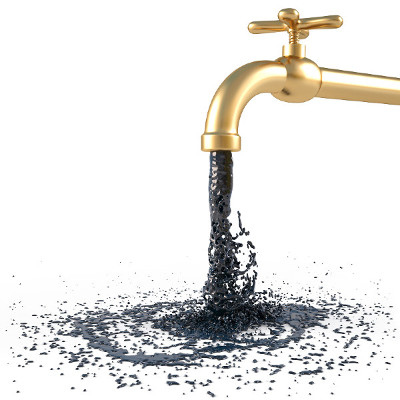 The market was clearly taken by surprise as was demonstrated by price action, with WTI shooting up from $45 to a peak of over $52 within a few days. It’s now evident that market participants had become too complacent and skeptical of OPEC’s resolve. Having said that, this skepticism seems to persist, with many market participants speculating that one or more producers may break the agreement. Others, in a more cynical mindset, note that it’s actually quite difficult to monitor or check whether the production cuts are in fact implemented. There has always been wide speculation regarding the accuracy of OPEC reported production numbers. These are all valid points and concerns, but the difference this time round is that nearly all producers are pumping oil close to capacity. It should be much easier and straightforward for them to see the agreement through.

Things could get complicated further by the December 10th meeting in Vienna between OPEC members and 14 non-OPEC oil producers. The OPEC agreement from November 30th is contingent on non-OPEC producers cutting production by 600,000 barrels per day, so this meeting carries great importance.

So what’s next for oil? Will this be a firework that fizzes out and oil returns to sub-$40 levels? Or will it be the beginning of another bull run to $80-$100 or beyond? The quick answer is probably “none of them just yet”. In our opinion the importance of the OPEC agreement should not be underestimated. It’s a move that clearly demonstrates the organisation’s will to control oil prices. Remember, oil is a big chunk of GDP for many of these oil-producing countries. They will not tolerate low prices for prolonged periods and so they will always ensure that their (finite, non-regenerating) product is sold at a good profit margin.

Market forces have shown that sub-$40 oil is simply not sustainable and as such it’s most likely the medium term bottom. Shale producers – the main driver of the recent supply glut – quickly became unprofitable and so rig counts collapsed. These same producers will come back online as soon as oil hits their breakeven price.

This is probably the beginning of another oil price recovery, similar to the one right after the 2008 crash. However, unlike 2009 the recovery probably won’t be sharp and in a straight line. Fasten your seatbelts – it’s about to get turbulent.

After reaching a bottom near $27, oil stalled a bit above $50 and has been consolidating ever since. From a technical perspective oil is currently at a critical juncture. A move lower from here will mean that the latest rejection completed the formation of a triple top pattern (triple bottoms and tops are very rare patterns) and a retest of the ascending blue T/L is in the cards (currently passes from $44). Alternatively, a break higher (the most likely outcome) will signal that this consolidation phase is over and if that is the case it is a matter of time for crude to surpass $60 per barrel. Please note that a daily close (or even better a weekly close) above the horizontal resistance is a must before committing to the long side. 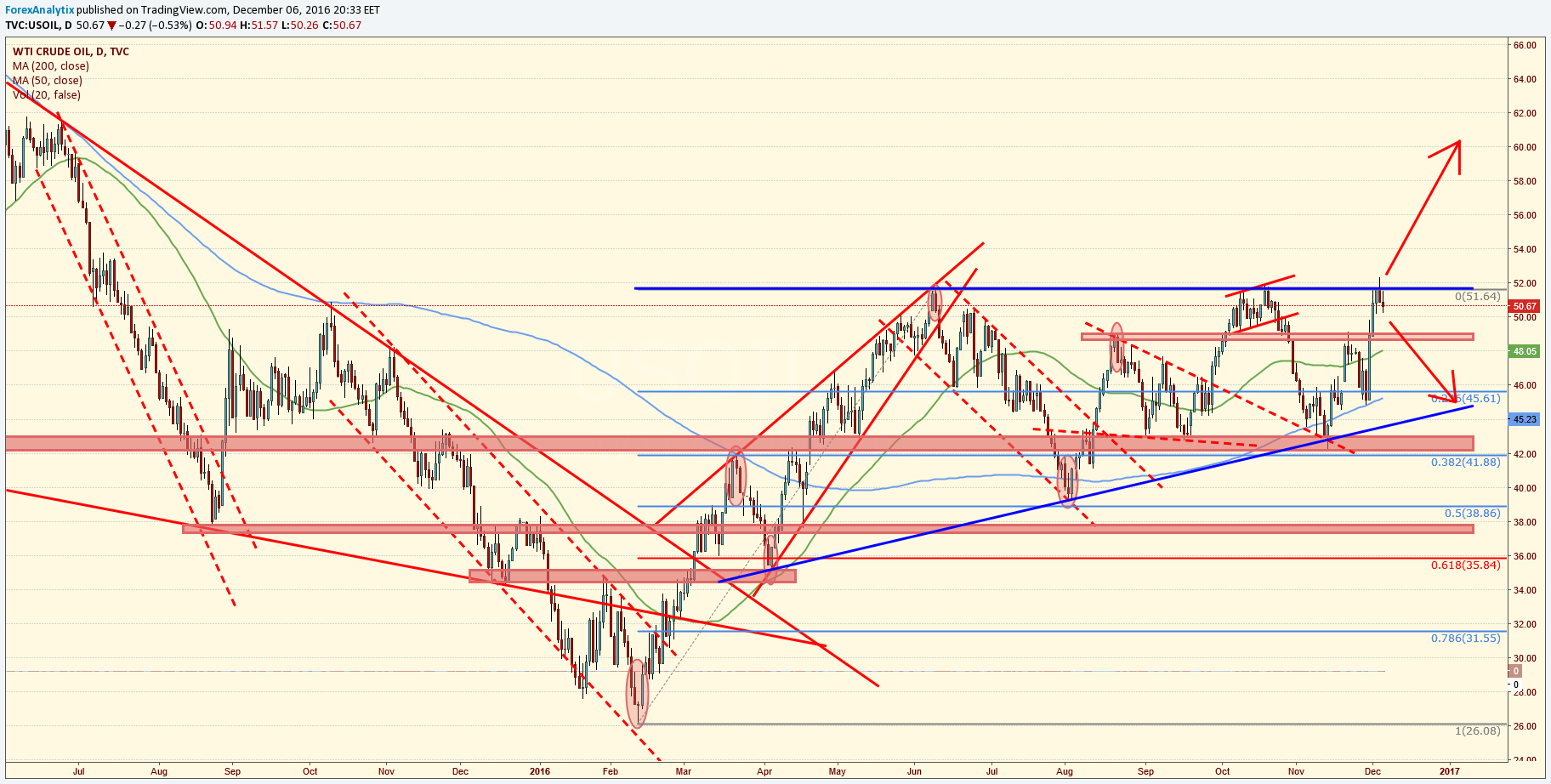 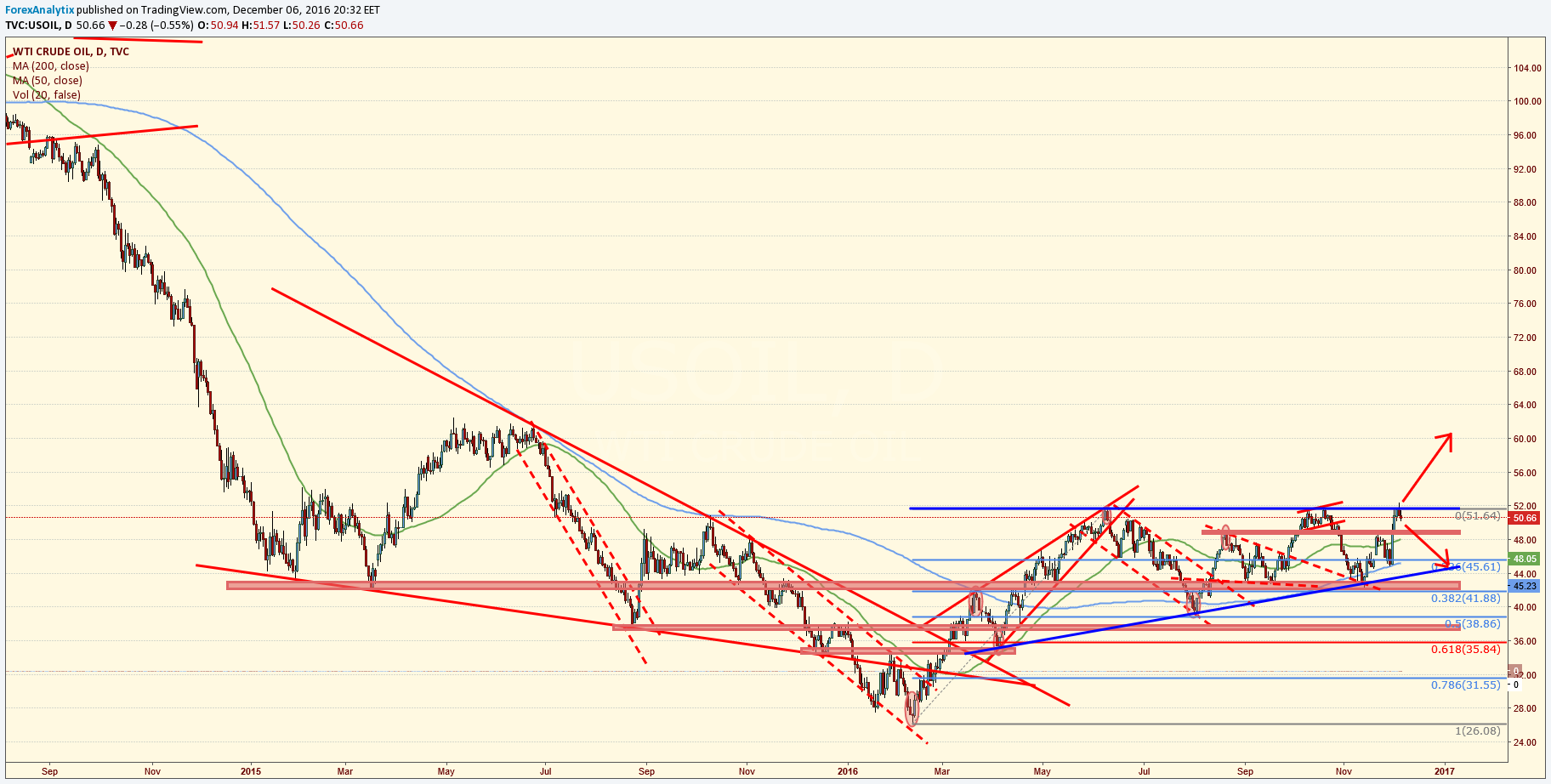 We are bearish oil at this resistance level and our bearish view is confirmed below $49.30.  Crude oil continuous front month futures chart shows that were are trading in repetitive ABCD patterns and both the rally from the August low and the rally from the November low are corrective (bearish) patterns.  We are at key resistance at $51.65 and if the ABCD reversal this week is confirmed by trading below $49.30 which is the 0.236 Fibonacci trend support, then we will look lower to $47 and potentially $39.40. Above the $51.70 resistance targets $55.00 next.  Trading below $49.30 makes a retest of the $39.40 support more likely. 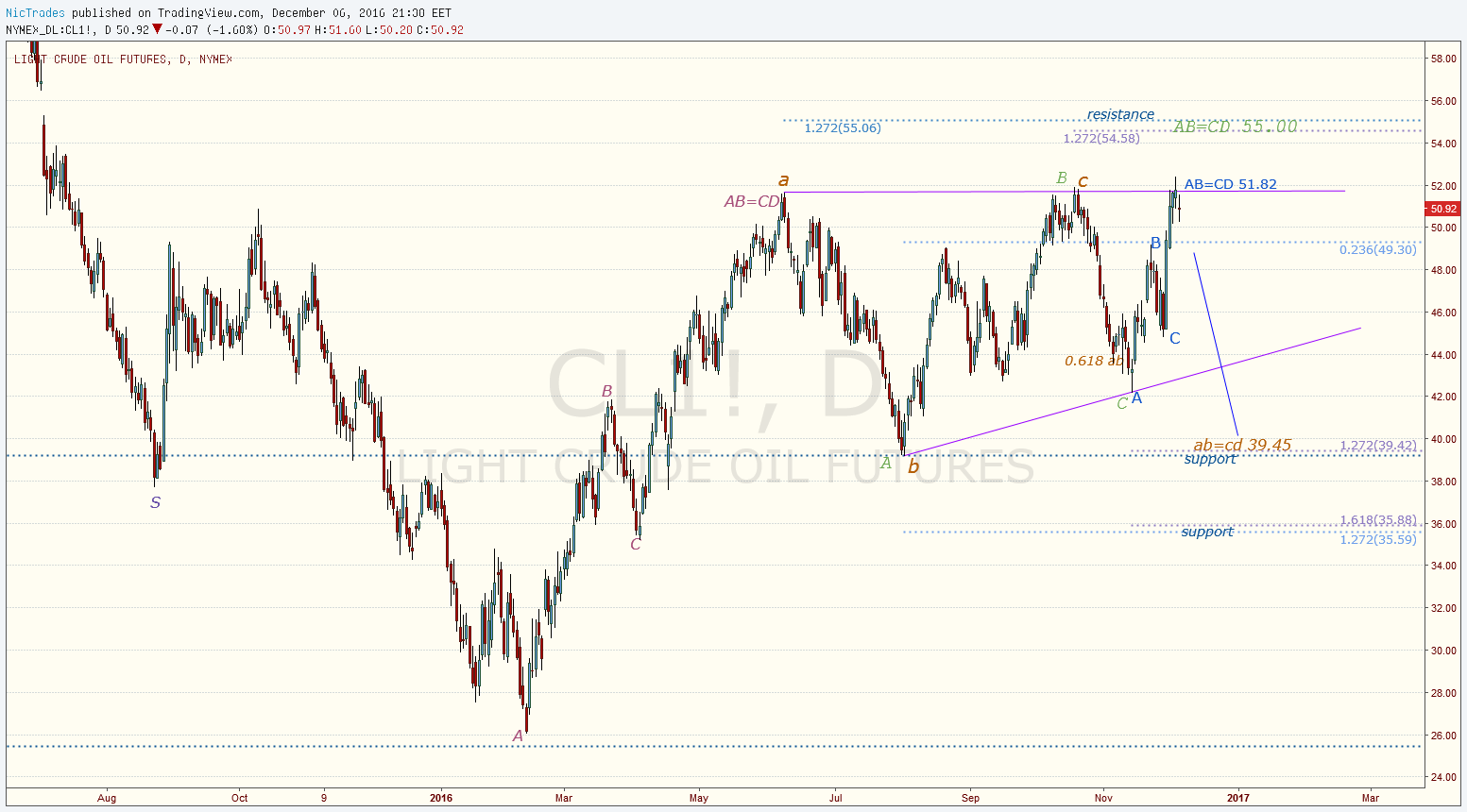 Crude oil bounced nicely this year from below $30 per barrel, when most energy instrumentes started bottoming signs based on Elliott Wave structure. Specifically, we can clearly count five waves of recovery from $27.60 to the $52.40 area where the market finally found a M/T top at the start of this summer. The aforementioned move displays a change in trend, from bearish to bullish mode and points to further gains. Notice that following the recovery, the market turned sideways, correcting in -what looks like- a running flat correction. This is a corrective 3-3-5 structure that occurs within the ongoing trend that is now expected to resume higher, either into wave C) or wave 3). However, under both scenarios (C of A-B-C or 3 of 5), we expect a new strong recovery which should see prices reach $60 next year or even $70 per barrel, based on our Fibonacci projection levels. Technically, a daily or weekly close above 52.00/53.00 resistance level is required to confirm that crude is done consolidating within this 5-month trading range. 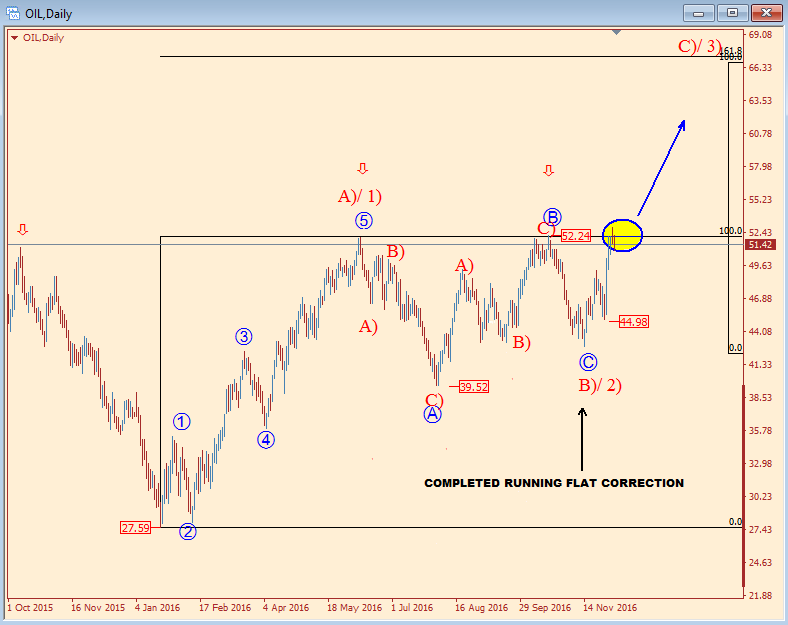 Is the CAD set to surprise to the upside?