The US Dollar squeeze higher may be over, now what? - ForexAnalytix - Blog
Click here to open Help

The US Dollar squeeze higher may be over, now what?

You are here: Home / The US Dollar squeeze higher may be over, now what?

The US Dollar experienced a prolonged sell-off since the beginning of 2017, which took the DXY Index down from 104 to the low 88s. That was a significant move lower which found support nearly 14 months later. We wrote a blog in January 2018 (https://www.forexanalytix.com/shorting-us-dollar-2017-trade-2018) and warned “…from a macro perspective it’s difficult to be bullish the USD for 2018, but there’s no guarantee that the Dollar will go down in a straight line. Positioning and sentiment is getting very one-sided and this could very easily provide choppy two-way action on the way down”. This is precisely what happened, with the DXY bouncing back to the 93 level over the past 2-3 months.

Nothing has changed materially from our macro perspective in terms of the Dollar. The Fed is continuing to hike rates on a relatively steady pace, just as the market broadly expects. However, economic data is no longer as robust as it was a year or two ago. Unemployment is still at very low levels, although if we dig into the details we can see that job quality is slowly deteriorating and labour participation rate remains near multi-decade lows. GDP growth is actually still very robust but we need to be wary of the effects of the rate hikes in the near future. It’s also worth noting that PMIs and housing data are starting to show signs of a turn lower.

However, the biggest source of uncertainty for the US economy remains President Trump’s policy decisions. He is currently fighting on several fronts but the most important one is US trade policy with Canada/Mexico, China, the Eurozone and other major trading partners. We also must not forget that, just like many other major Western economies, the US continues to run a significant annual budget deficit that needs to be funded by issuing more debt. Naturally, this brings us to the easiest and most popular (at least for the past decades) method of tackling the problem of increasing debt: inflate it away by devaluing your currency.

President Trump’s policies have been regarded as Dollar bearish and this moves us nicely onto precious metals. We have written in the past that from a macro perspective the future for Gold and Silver looks very positive. The price of silver is currently at the same levels as Q1 2008 (before the Global Financial Crisis took over), while gold has fared better but it’s still roughly at 2010 levels. Considering how much money & credit supply has ballooned since then, and given that the supply/demand profile hasn’t changed significantly for either metal, current prices actually look very attractive. If we also take into account that PMs are naturally a hedge against global geopolitical turmoil, they look like a must-have asset to own for a balanced portfolio – with silver being most likely to outperform gold on the way up.

If you haven’t recently looked at the DXY (US Dollar index), you’ll see that we have bounced quite aggressively over the last couple weeks. If you have been listening to the free daily F.A.C.E. (Forex Analalytix Community Experience) webinars or the Week Ahead Videos on YouTube for the past few weeks you would have been well prepared for this move. But now that the DXY has corrected, what are we to do now?

Frankly, the US Dollar is not as straight forward as it was a couple of weeks back, and one could argue both points about US Dollar strength or weakness from current levels. I’m not going to bore you with the reasons why it can or can’t rally from here, and I am sure most of you reading this post have your own arguments. But what I will point out is something that may not be as obvious: Gold and Silver.

With the recent US Dollar strength we would have expected the precious metals to pull back a lot further than they have. But instead, Gold has held the 200DMA and Silver has had a very marginal pullback. What this sets up is something very interesting, especially if the US Dollar index has finished its recent squeeze higher (and the EURUSD speculative positioning is a little more “square” now that we have seen a pullback).

For starters, let’s take a look at the DXY and see where near term resistance is: 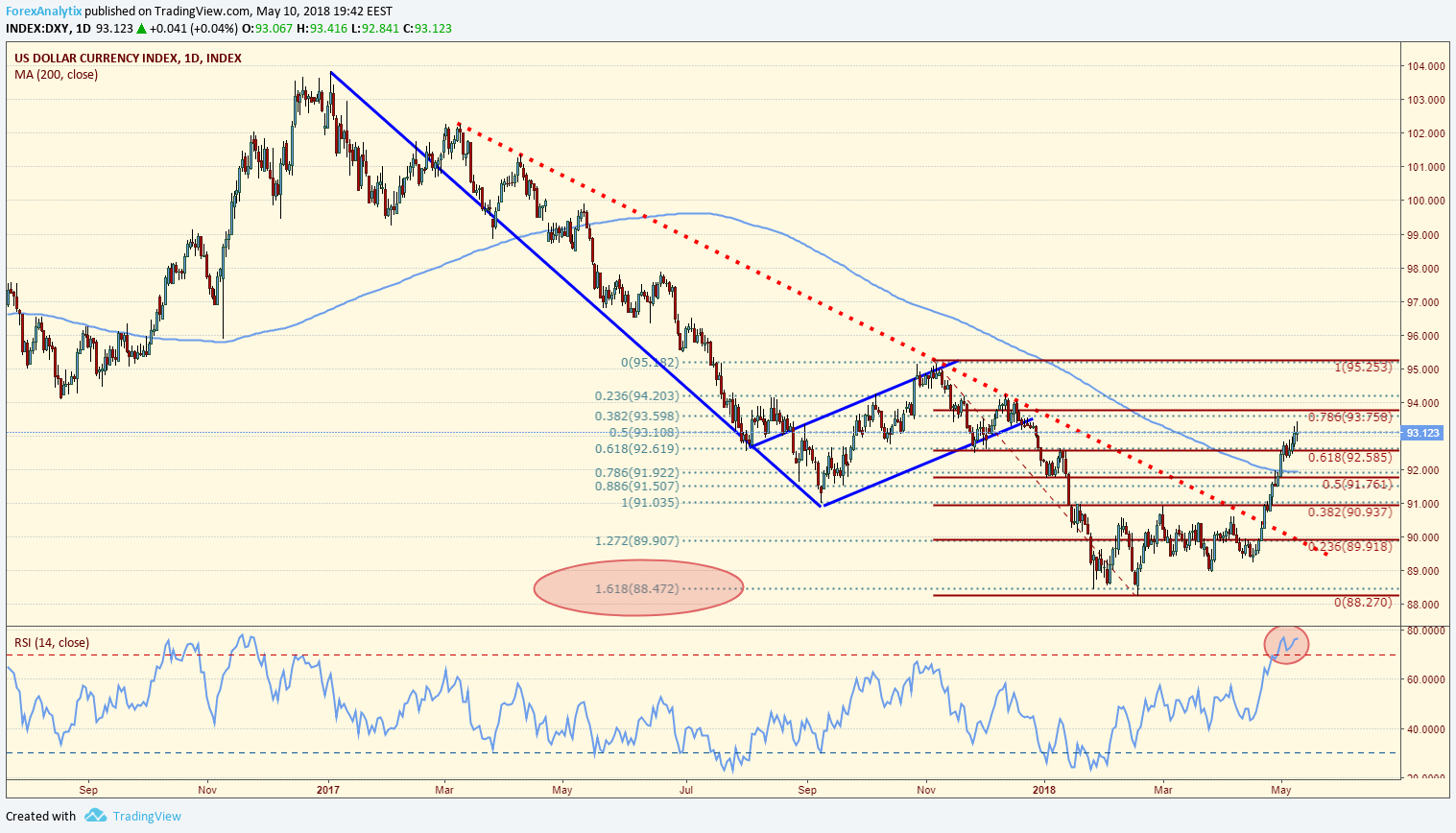 As you can see in the US Dollar index, it has rallied back towards the 78% retracement of the November 2017 highs to the February lows. That level comes in at 93.63, while the daily RSI was very overbought and is working off those overbought signals. Let’s also keep in mind – in the longer term – that the US Dollar index continues to make lower highs, especially if this week’s highs hold.

If you look at Gold, the pullback from the 1360 level resistance was fairly shallow considering the significant rally of the DXY. The 200dma supported Gold well, especially over the last two weeks as the DXY continued to surge to new highs. 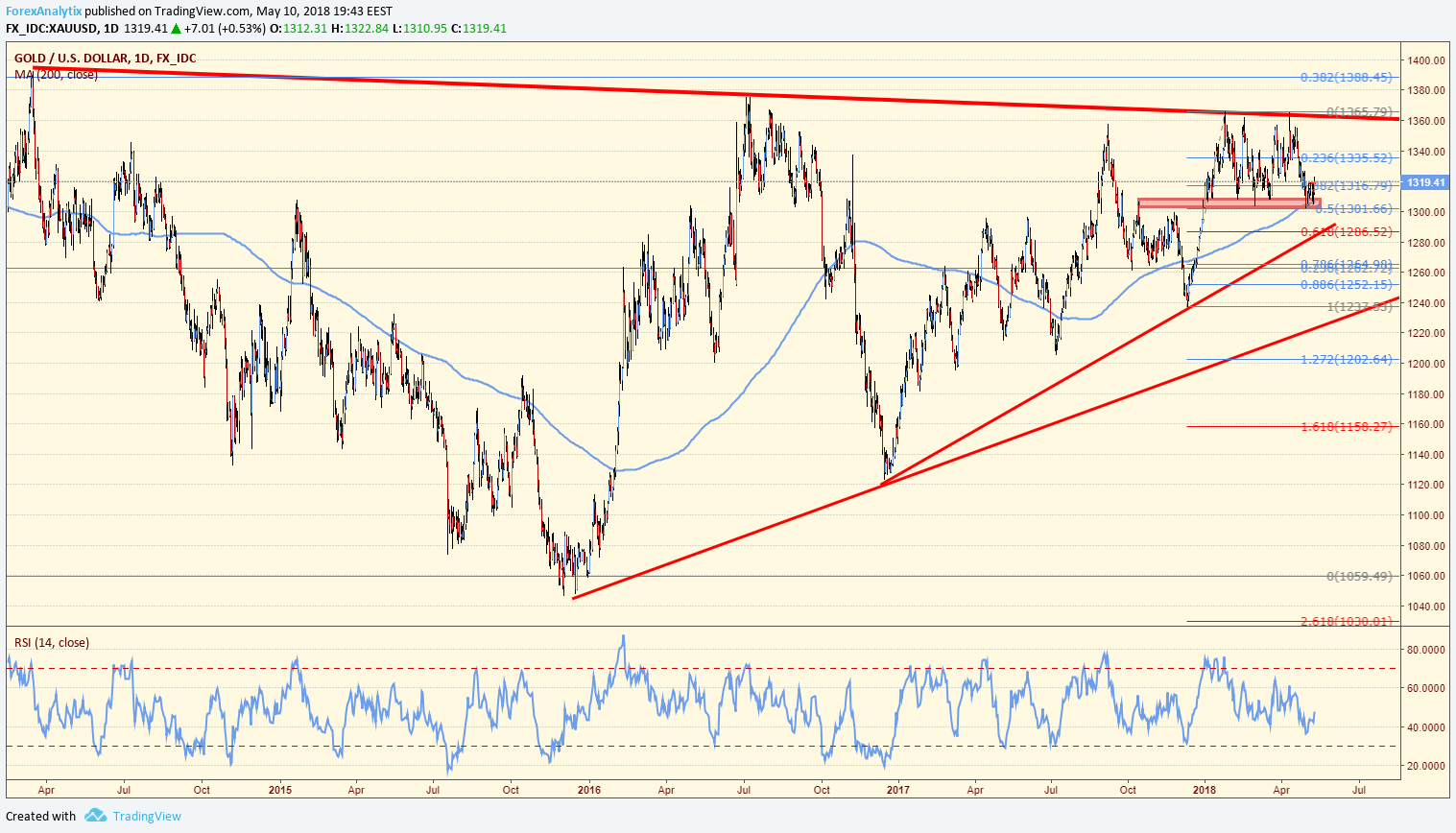 Silver is a similar story where the pullback from the 17.35 level only reached the 16.00 level and found support during the past two weeks. We did break back below the 200dma but we have been trading around this level for many months now. 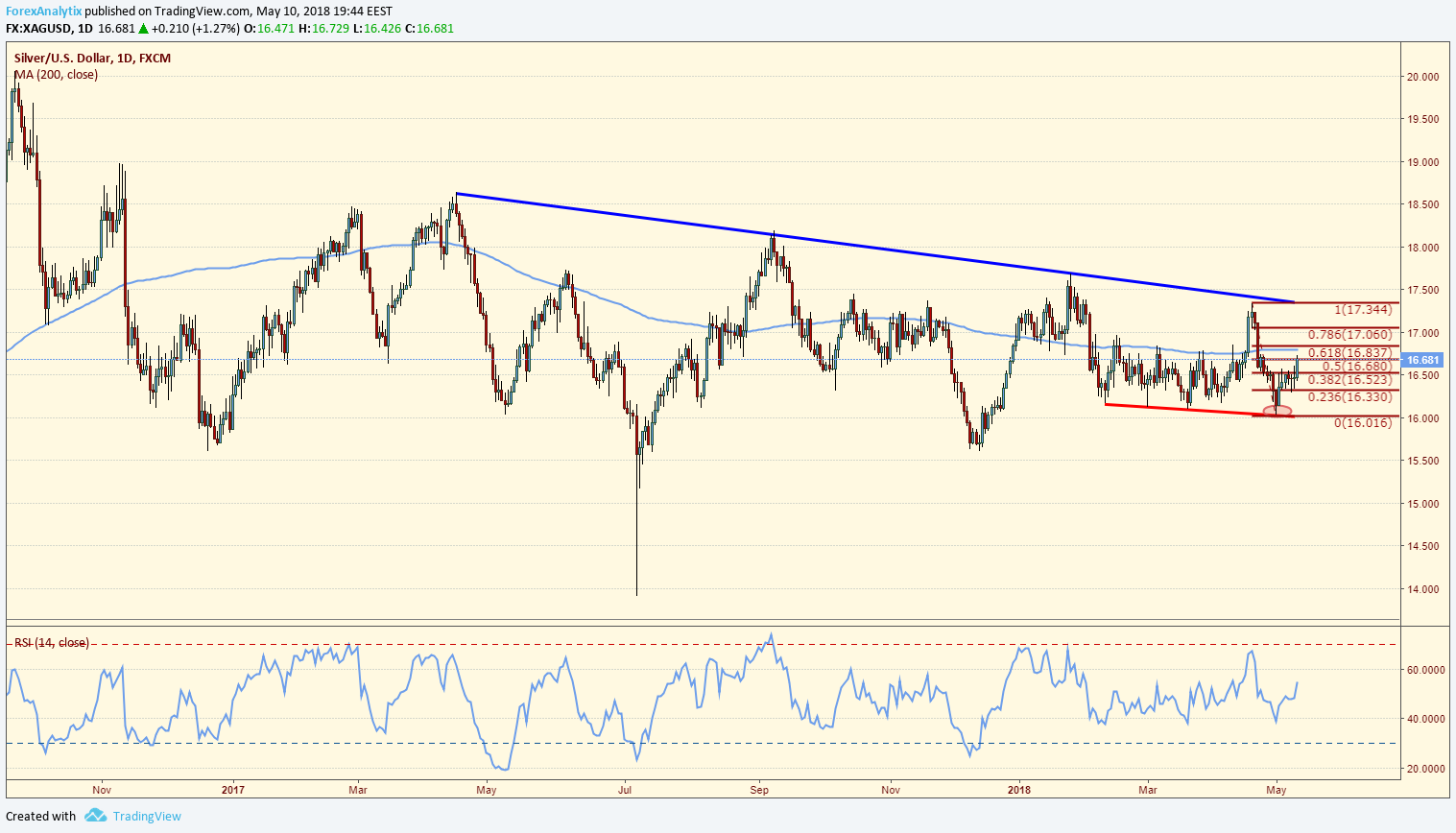 What’s more important about both Gold and Silver is that the multi year trend lines were both tested in April and if the US Dollar starts resuming its downtrend again and the trend lines are broken, the breakouts could be very bullish events for both metals. Those levels come in at 1365 and 17.35 respectively.

Last month we brought your attention to the big levels on both Gold and Silver and in my opinion you should be watching those levels very carefully once again – especially if the US Dollar comes back under pressure and resumes its longer term downtrend.

After a 55% rally since the 2017 lows, crude is now vulnerable
Scroll to top