You are here: Home / Precious Metals are threatening with major technical breakouts

Precious Metals are finally on the move

Precious metals – and commodities in general – have experienced a strong boost in the past couple of weeks. Oil seems to have been leading the charge since mid-2017 but what do we make of this move?

Metals such as Gold, Silver, Copper, Platinum and Palladium have three major price drivers, each driver having different importance for each metal:

Let’s take supply & demand first. Global economic growth has shown promise since the late stages of 2015 with the US economy in particular finally exhibiting some solid growth after many years of ZIRP and QE, enabling the Fed to embark upon a steady hiking cycle. The Chinese economy also found its footing following a period of uncertainty where talk of a “hard landing” was frequent. As a result of the global recovery, commodity & metals demand started to firm up. Industrial demand for metals (silver in particular) has been steady and although miniaturisation means that there is less material used in individual devices such as mobile phones, tablets and computers, the ever-increasing number of such devices more than cancels this out. Also, given that the supply profile of the abovementioned metals has been relatively constant, it’s only natural that the supply/demand curve has been slowly shifting upwards.

Moving onto the US Dollar, it’s relatively obvious that Dollar-denominated assets will see their price fluctuate in line with the greenback. The Dollar’s significant decline in 2017 laid the foundation for higher commodity prices and this was best observed in Oil’s recovery. In 2017 WTI rose from around $42 per barrel to a high over $60 – a staggering 43% rise. This invariably had a spill over effect to many other commodities and metals, given that oil is a vital component of most production processes. Since the end of January 2018, the Dollar has been trading in a relatively tight flat channel and it’s quite possible that this is a consolidation before resuming lower. The Dollar’s recent performance is certainly giving commodities & metals a push higher as confidence in it is waning.

Finally, we turn to geopolitical events and their effect on metals. The US administration has been fighting a number of battles across the globe and such developments can have a big effect on safe haven flows. Firstly we have the US/UK/French attacks on Syrian targets along with Russia’s initial response. Tensions are escalating and relations between Russia and the Western Allies are deteriorating. The US is also fighting potential trade wars with China, Mexico & Canada (NAFTA) and potentially the European Union. Such events introduce uncertainty that usually boosts precious metal prices. This doesn’t really apply to copper, but it certainly is the case for gold, silver, platinum and palladium. Gold and silver in particular are trading at roughly the same levels as 2014-2015 and have been consolidating for a few years now. Global geopolitical developments must be closely observed because any further escalation can easily produce an upward price breakout.

So what do we think is next for metals on a macro level? The picture is quite a positive one: the combination of increased demand, a faltering US Dollar and rising geopolitical tensions should maintain positive price pressures in the future. Having said that, some metals such as silver have already experienced a sharp move higher and could well retreat before resuming their push higher. It’s also worth noting that gold is only around $15 away from a breakout on a daily close, and gold tends to pull most other metals when it does break one way or another.

The most popular of the precious metals -gold- has been trading within a triangle since the 1st day of the year but during the past couple of weeks we have seen it threaten with a breakout multiple times. A daily close above $1355 will open the door for a push higher, ideally towards the 161.8% extension of the triangle’s maximum width at $1405. It is worth mentioning here that looking at the Weekly chart we can see that gold has already produced a major breakout during the summer of 2017 when it breached through a L/T descending T/L so a resumption higher should not be treated as a surprise. 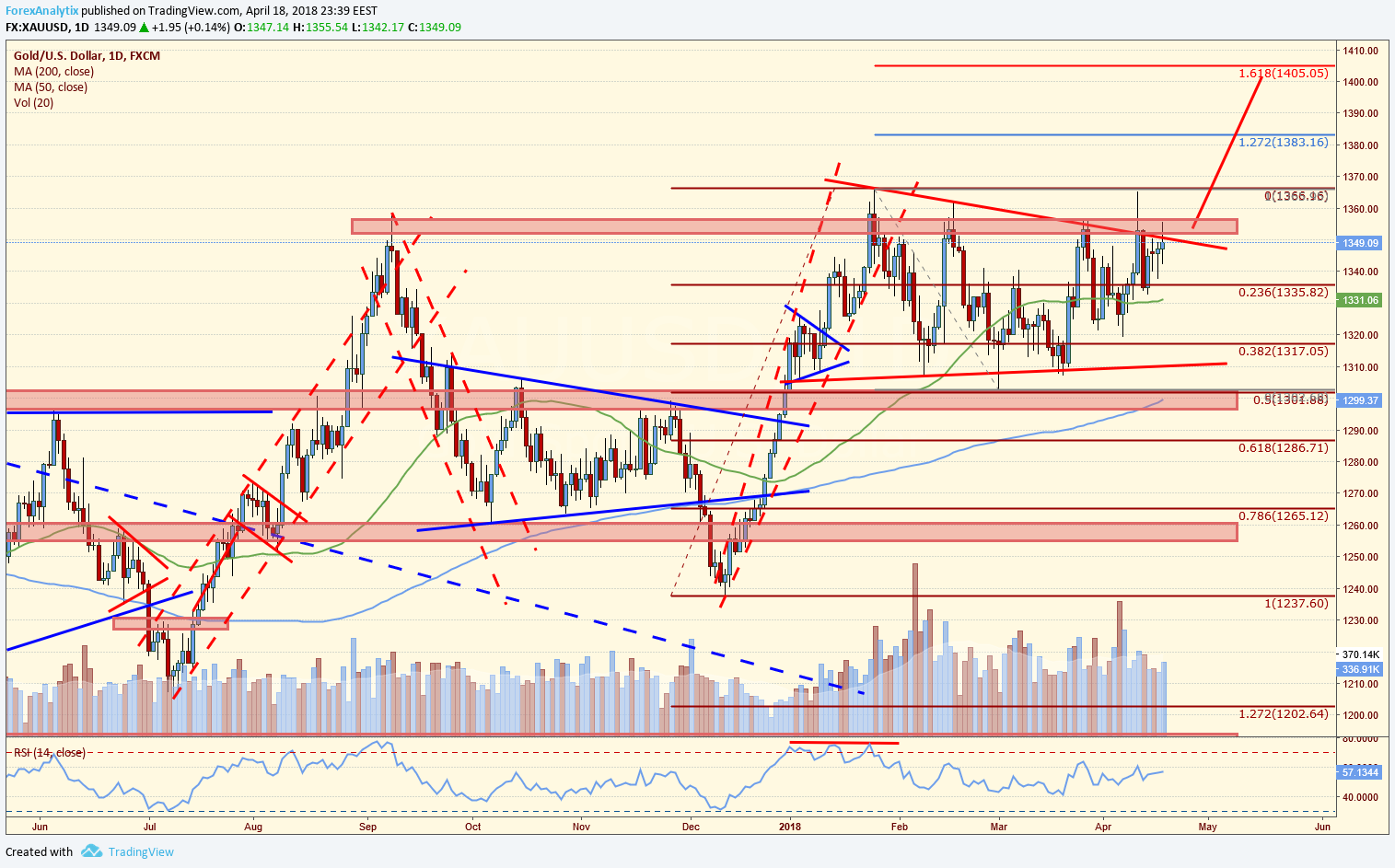 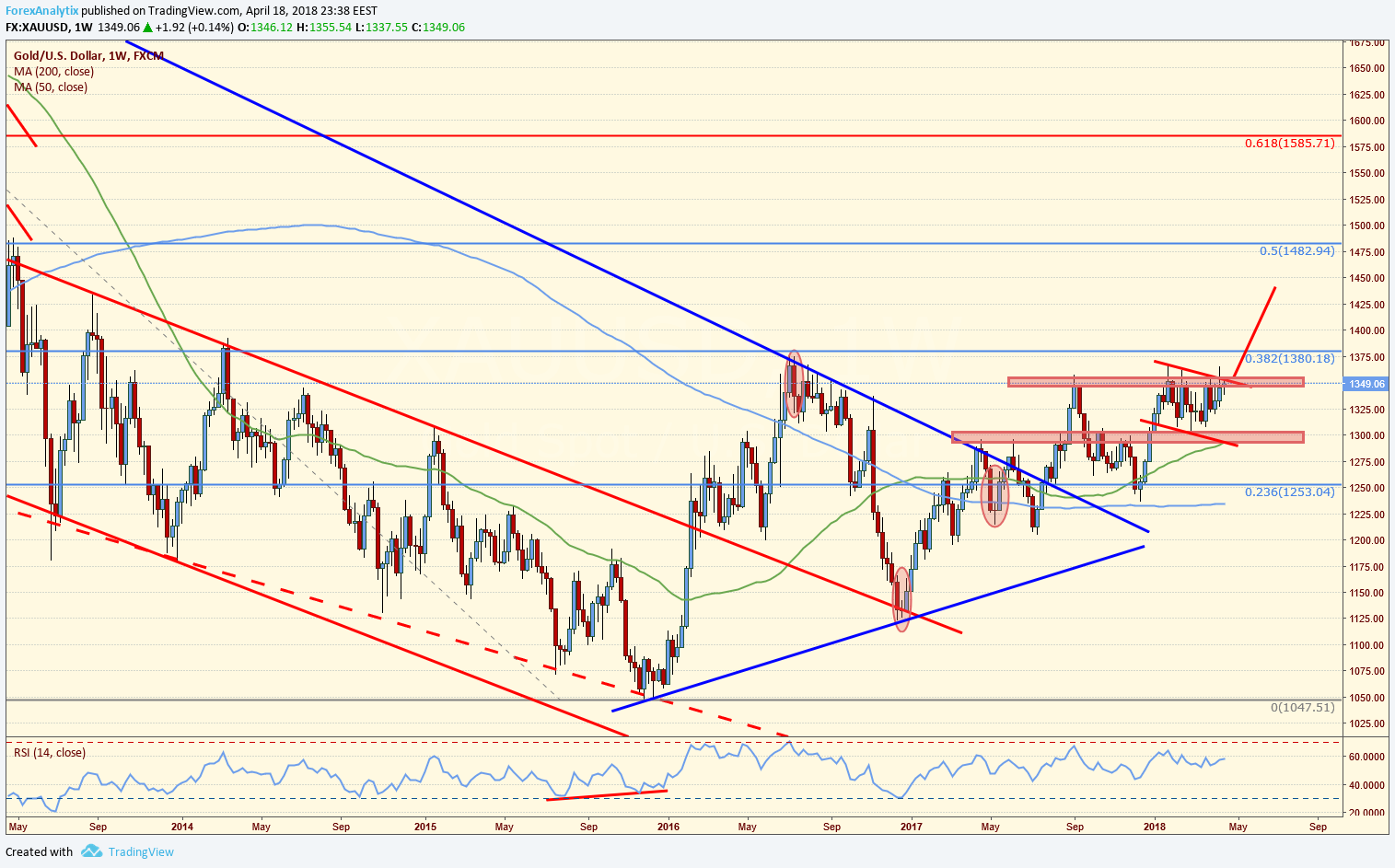 Silver has been trapped within a $3 range (on a weekly closing basis) since October 2016 (see weekly chart). This is a prolonged period of consolidation which at some point is bound to end and the recent violent move higher above an even tight consolidation that lasted 2.5 months) might not be enough but it certainly brings the metal closer to a critical descending T/L resistance that currently passes from $17.50. A break above there opens the door for a move to at least $18.50 where a critical confluence of resistances meets, one that can even end up defining the trend if broken. 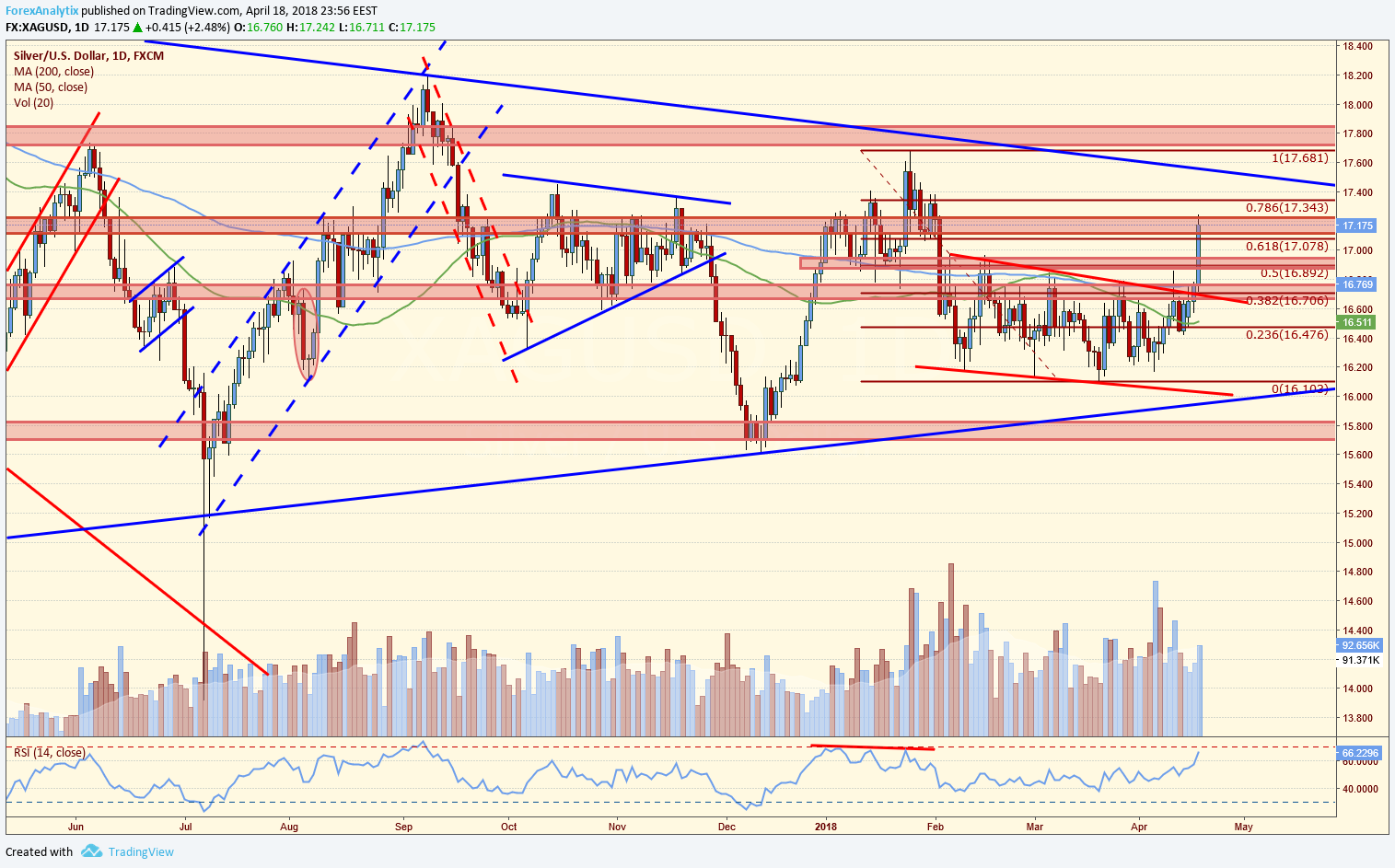 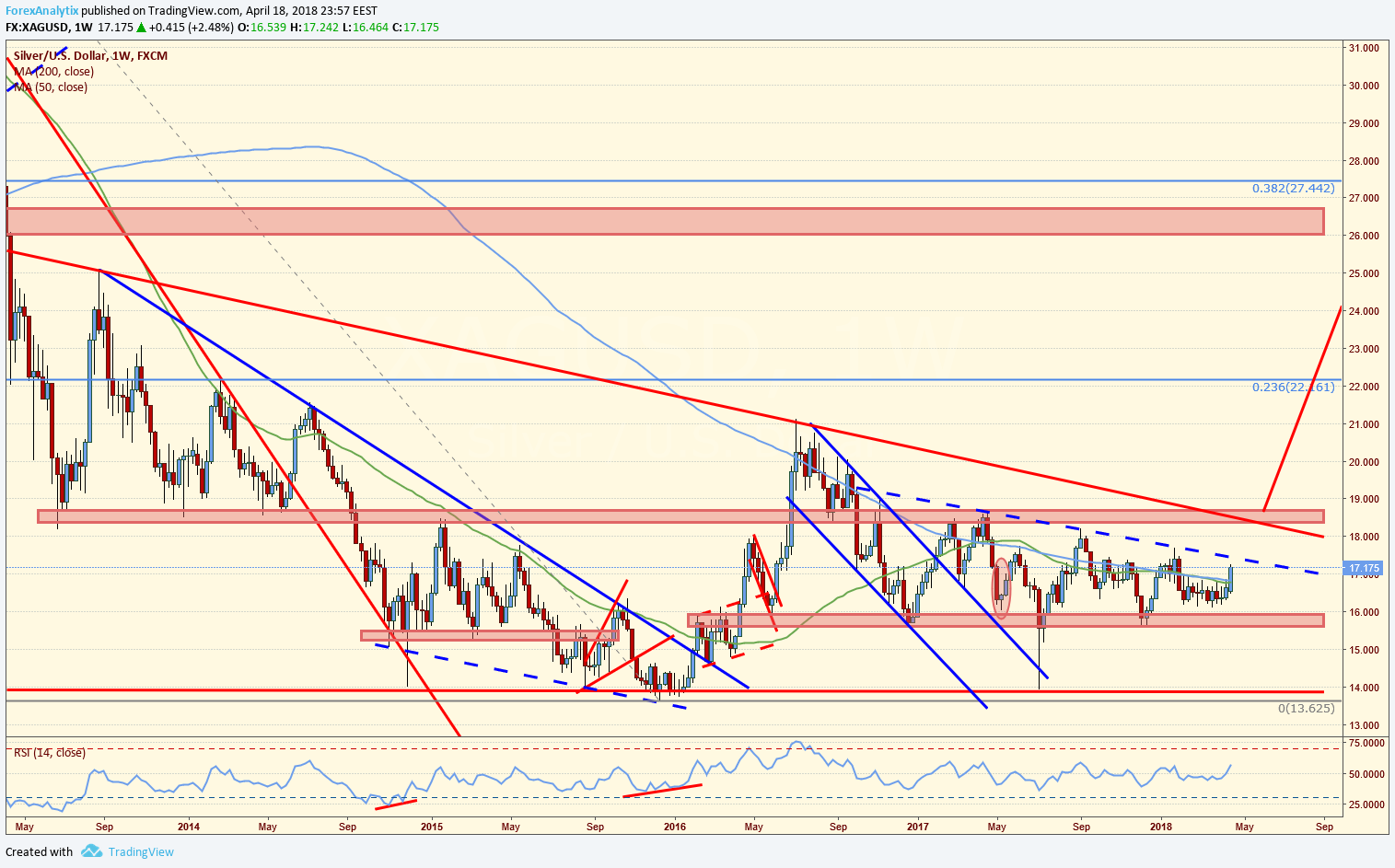 Copper has been in an uptrend since the first days of 2016. During this period it has been going through phases of rapid appreciation as well as “cool off” periods during which it works off the overbought conditions. 2018 price action so far looks like one of those periods since the metal has spent 4.5 months drifting slowly lower. Having found support at the end of March right on the confluence of a descending T/L and a horizontal area of demand / support ($2.94) copper has started pushing higher, currently testing the confluence of resistance of the descending T/L resistance that has capped price action since the December high and the 61.8% Fib. A breach of this level should indicate that another leg higher has begun which should bring the metal once again to multi-year highs. 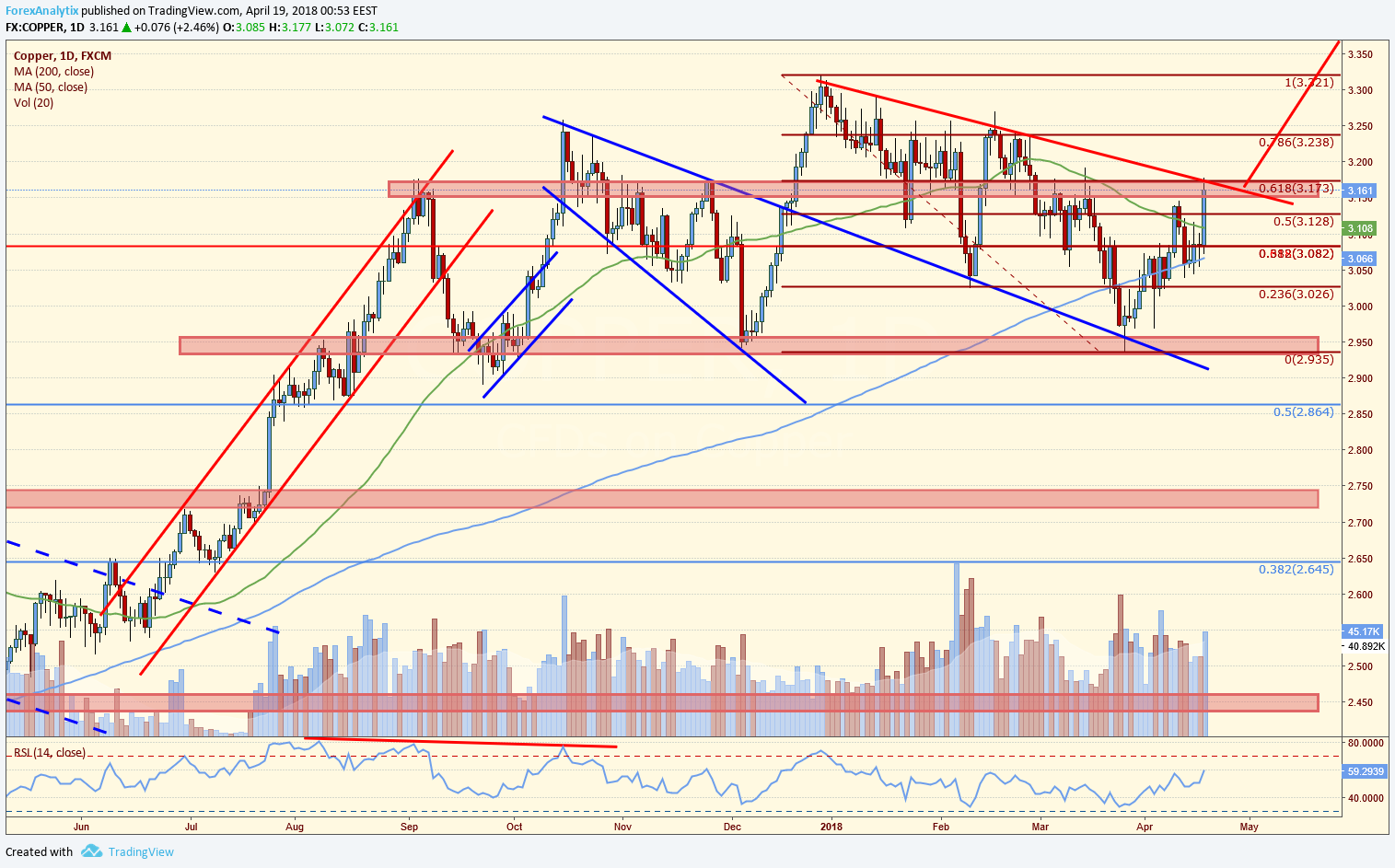 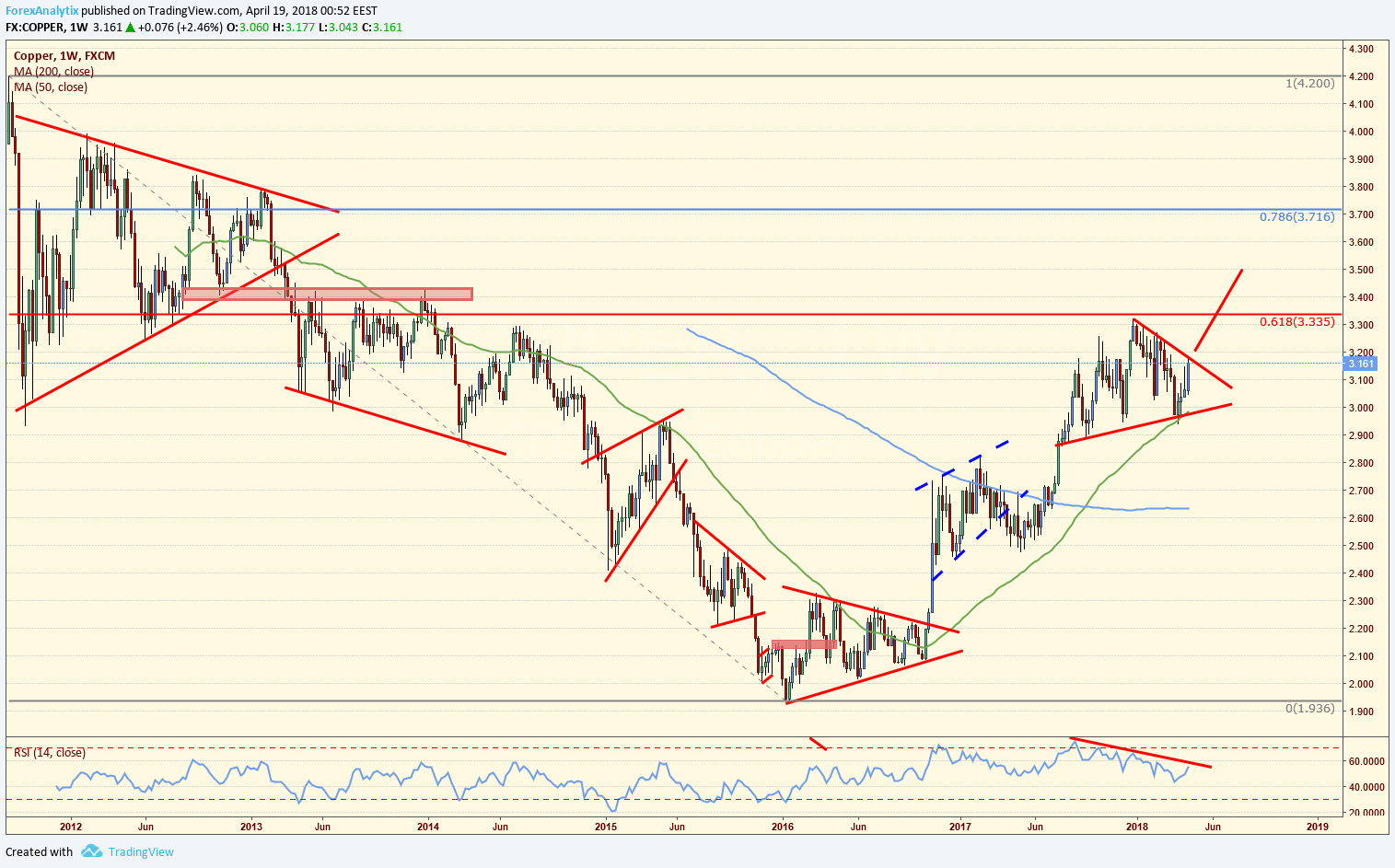 Palladium has been in a wild uptrend since the first days of 2016. During this period it appreciated more than 150% (!) until it finally found a high 15 days after the start of this year. The 21% corrective move lower that unfolded (listeners that follow our webinars and ForexAnalytix members in our chatroom know that we successfully identified and traded this move) found support at the $900 area (L/T ascending T/L support and horizontal demand / supply zone) less than a couple of weeks ago. The reaction that followed after the precious metal tested that zone was to say the least emphatic with the pair having now appreciated by more than 15% within 8 trading days, now testing the 61.8% Fib of the corrective move. We consider any pullbacks from here (a very likely scenario) towards the $1000 area as a buying opportunity since Palladium has held the uptrend and has a high chance of eventually breaking to new highs. 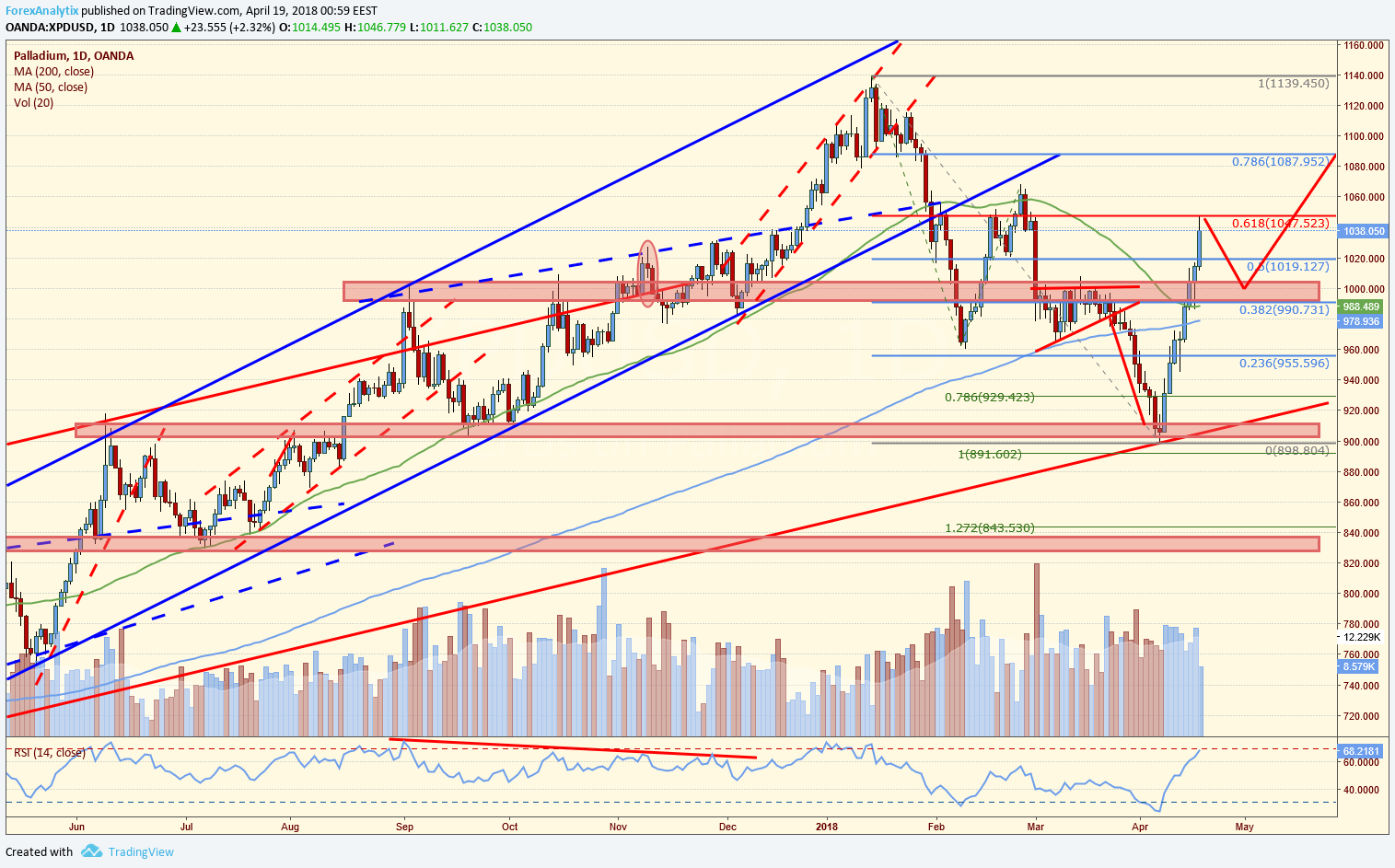 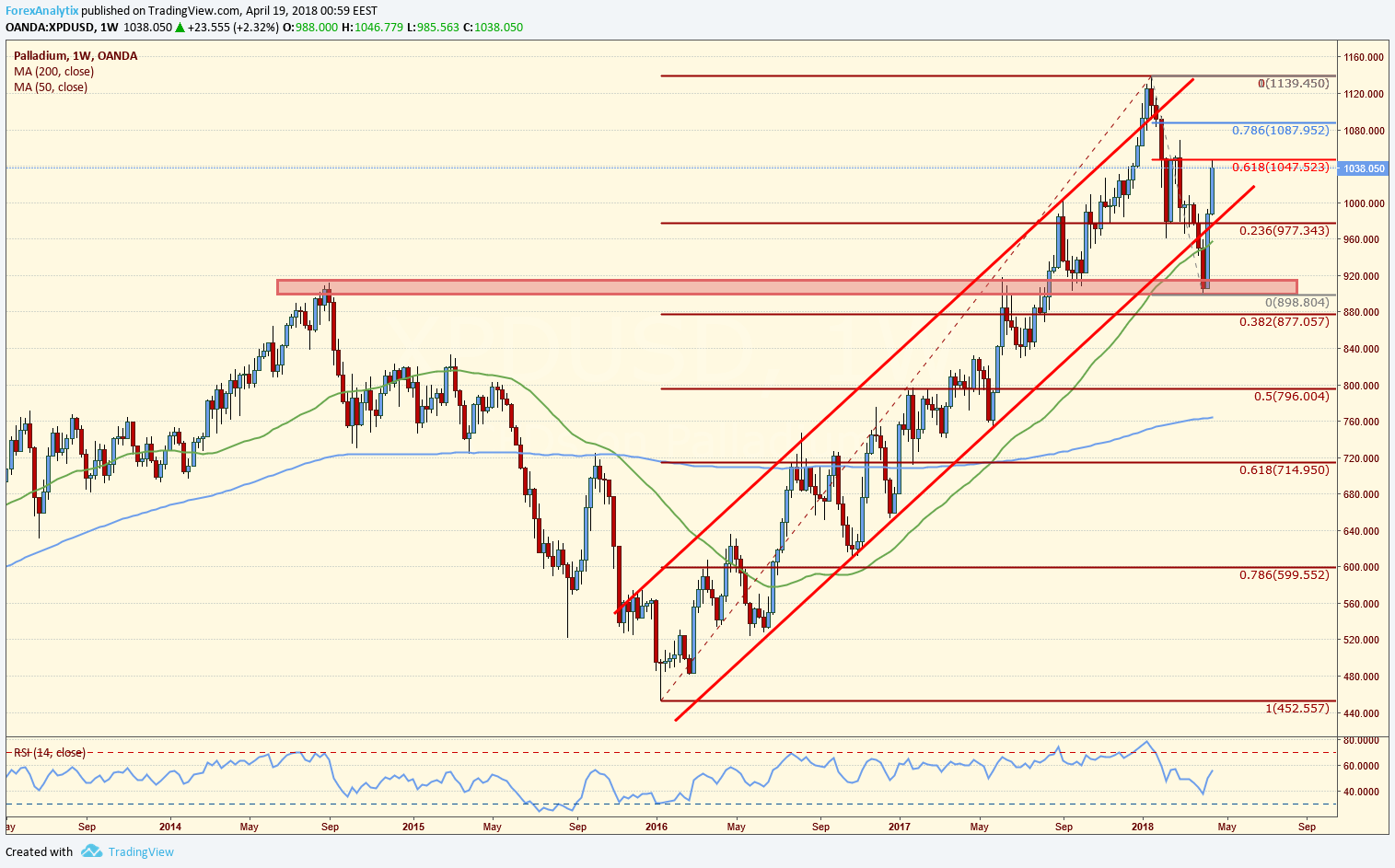 It’s now trading above the previous bearish structure and major trend-line, but rejecting for now the previous highs from June 2016 as previous major resistance.

We should not ignore a retest of the ascending trend-line acting as support before new highs, but considering the lower degree price structure under development we can expect a breakout in the direction of the previous move with projections at the same price zone for the default ab=cd pattern mentioned above around 1445. 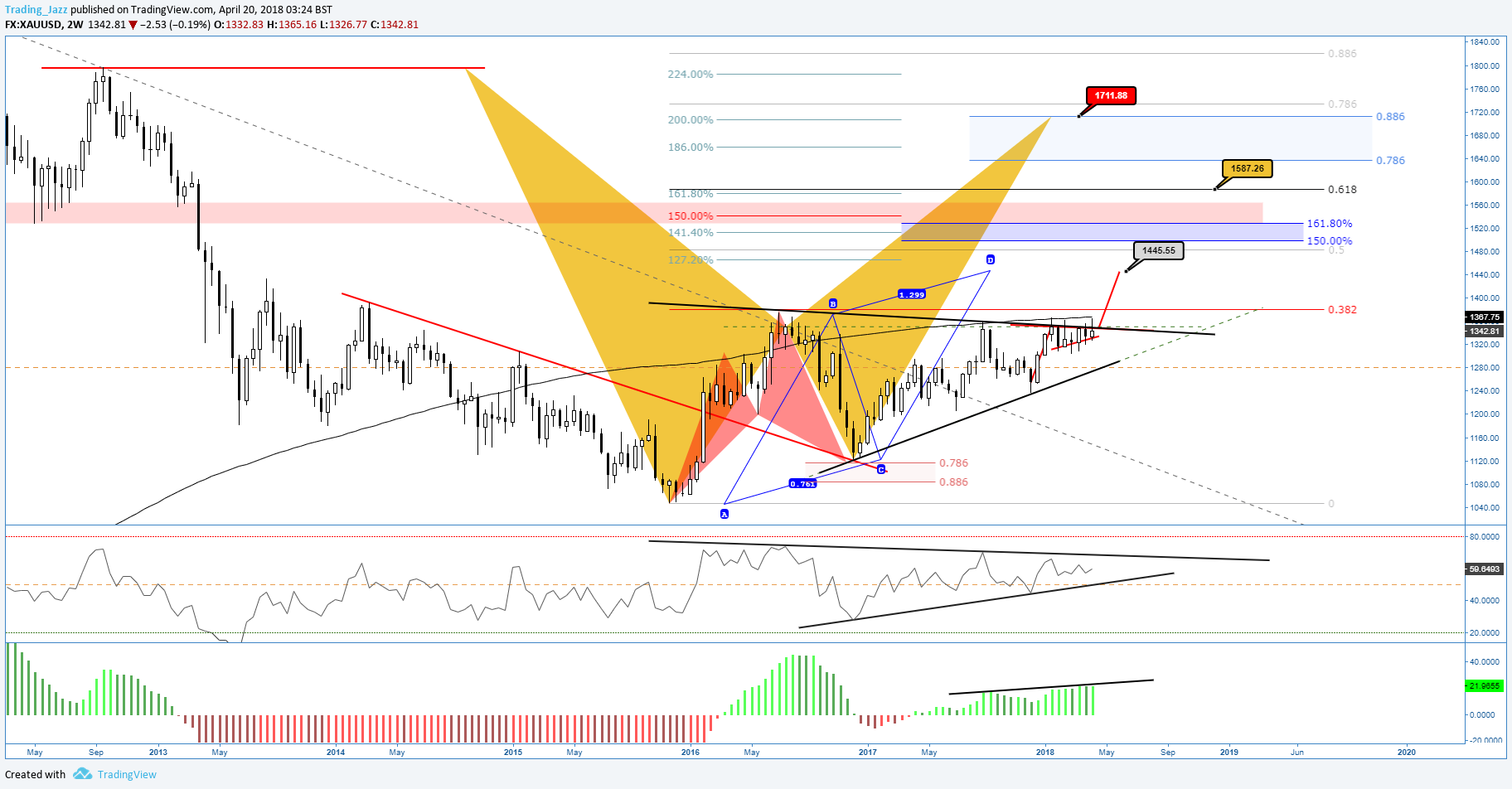 Trading inside one symmetrical triangle, we can expect a bullish breakout of this structure with projections between the 127% extension at 18.914 for the bearish butterfly pattern, and the 78% fib retracement, for the bearish cypher pattern at 19.570 as a retest to previous structure highs.

And against my expectations, the bullish bat pattern at 88% fib retracement at 14.40 as a retest to previous structure major support.

Both RSI and MACD showing potential for bullish trend continuation but we need the price to follow those expectations, breaking above the triangle. 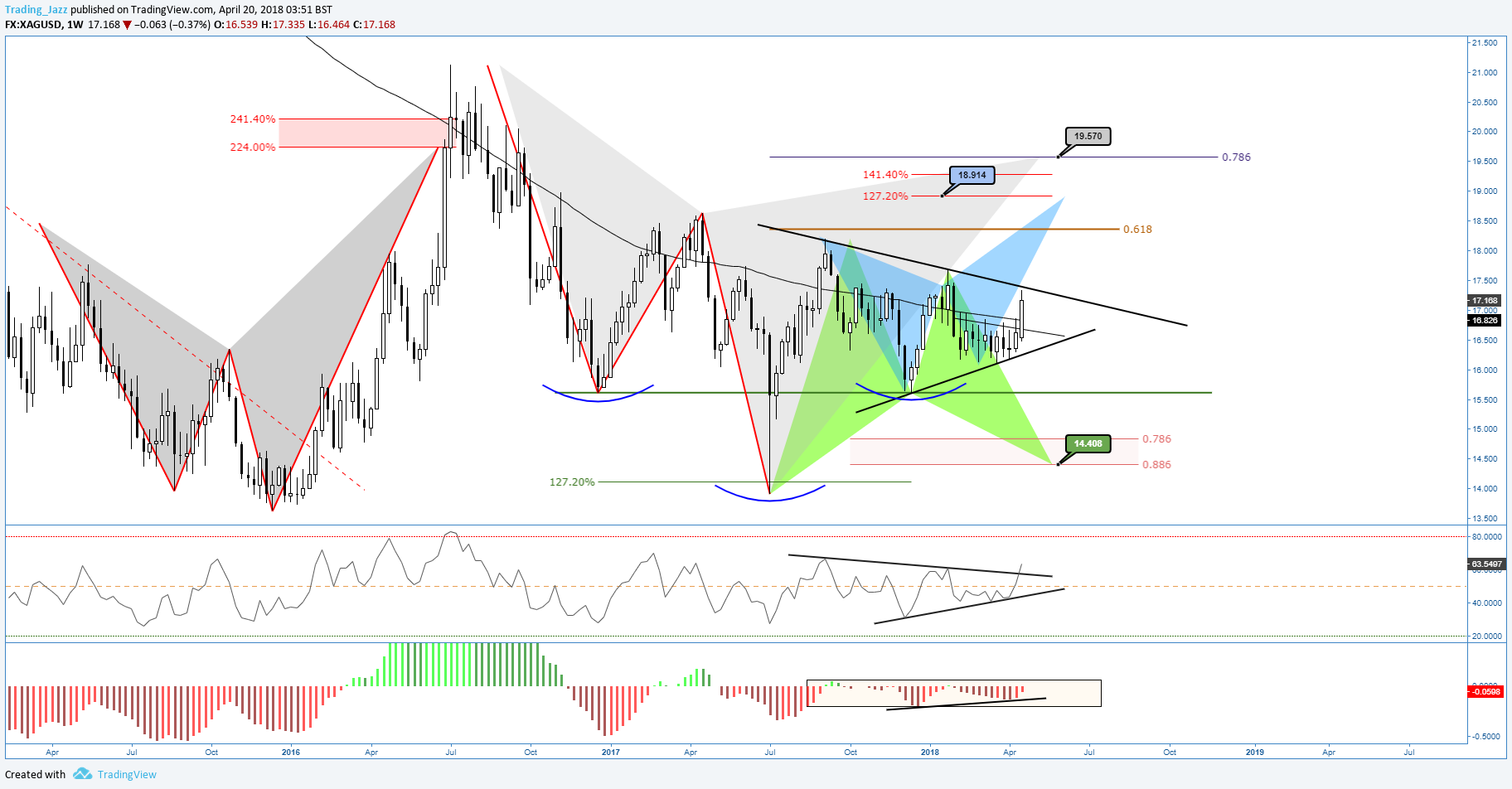 Inside one ascending channel and forming one eventual three drives pattern at confluence with the bearish sharks between the 161.8% and 224% fib extensions.

The bullish patterns below between the 2.45 and 2.68 searching for the 200MA and at confluence with the golden ratio at 61.8% fib as next and eventual pressure zone / support.

RSI printed bullish hidden divergence forcing the price to bounce at channel support, it’s now crossing the 50’s.
At the same time MACD rejecting the idea to change the momentum for now, but already showing bearish divergence – noticed between the highs from Feb 13 2017 and the most recent structure highs from December 25 2017. 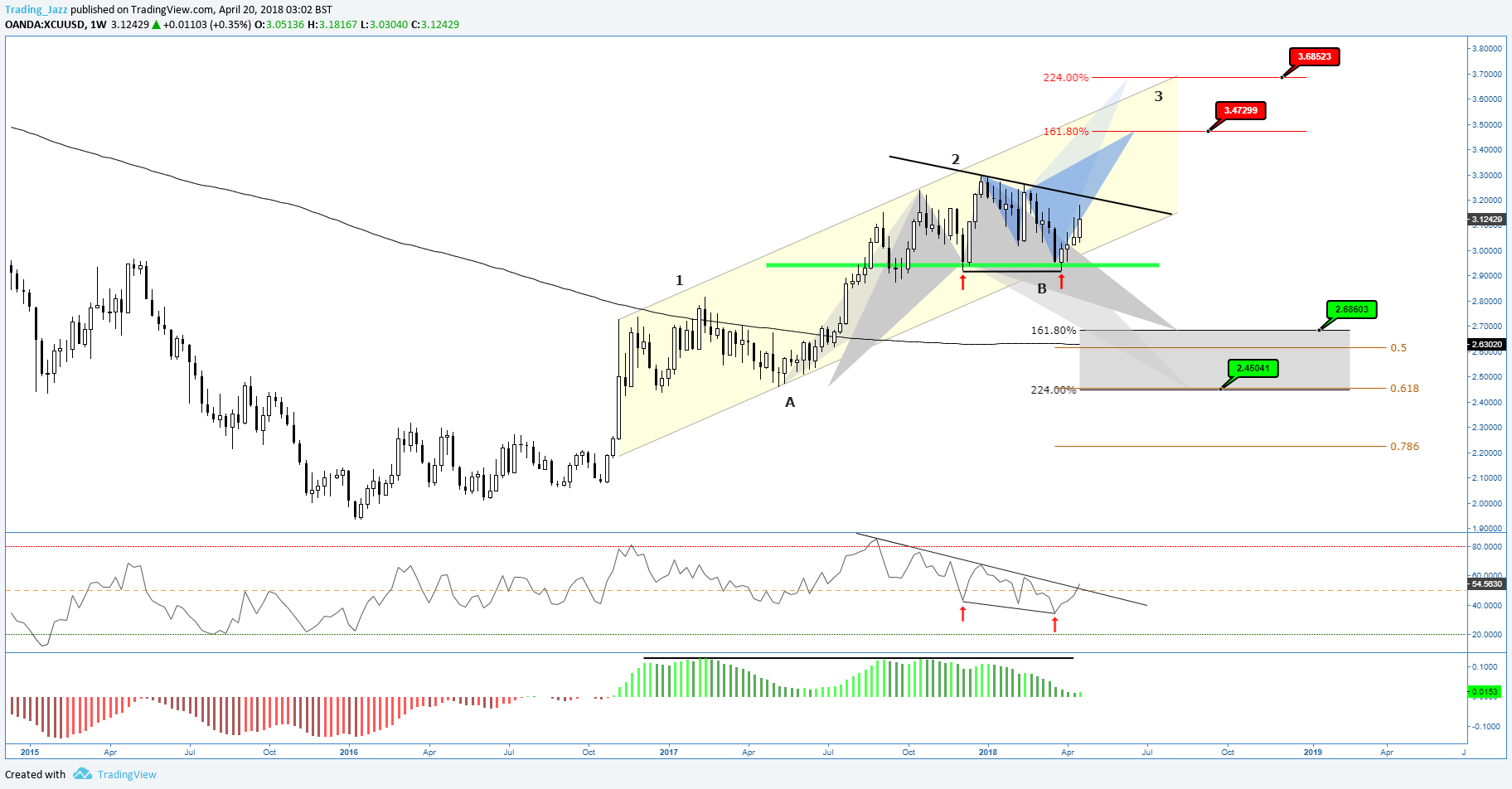 Trading inside one huge bearish symmetrical triangle and inside one internal or lower degree descending wedge, the probabilities for a bearish structure breakout are high.

The bullish butterfly pattern below at 826 or the extended crab at 161.8% at 770 should be useful for stop hunters to put strategies in action.

RSI still below the 50’s and MACD printing bullish divergence, we should not ignore the possibility to go test the symmetrical triangle descending trend-line acting as resistance. 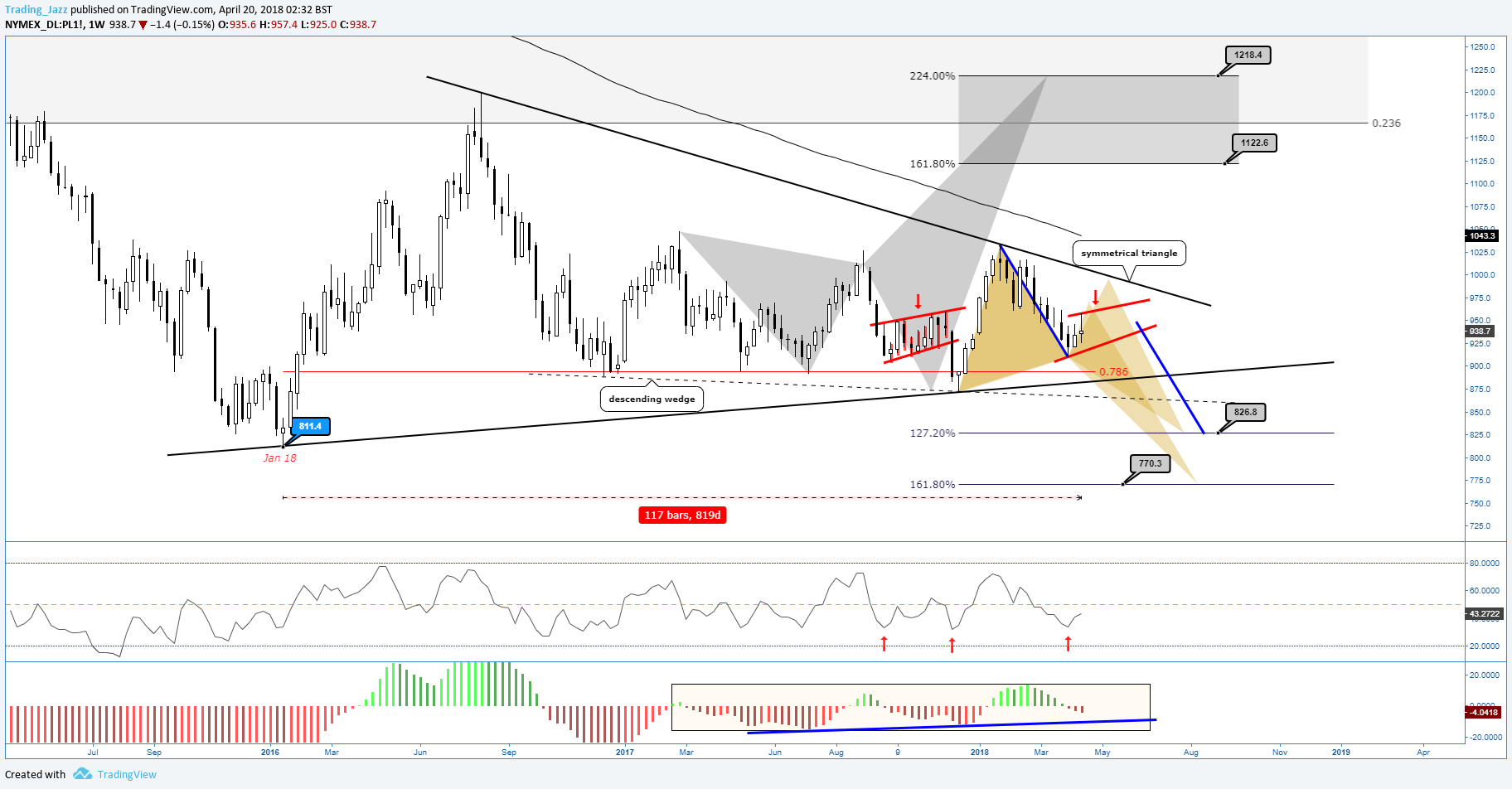 Strong rejection without even touch the 38% fib and it’s now rejecting the 61.8% fib at previous structure highs with the pressure of one eventual bearish cypher pattern a few points above at 78% fib at 1087.493.

RSI recovering from the 37 showing also some bullish hidden divergence which can send the price to retest the structure highs and suggesting bullish trend continuation.

MACD showing potential for more bearish momentum inside this major bullish trend, suggesting a deeper corrective structure, and if the participants are the same with the same intentions as previously, and using a mirror of the previous price action as guidance, they will put the price at 61.8% fib retracement around 714.774. 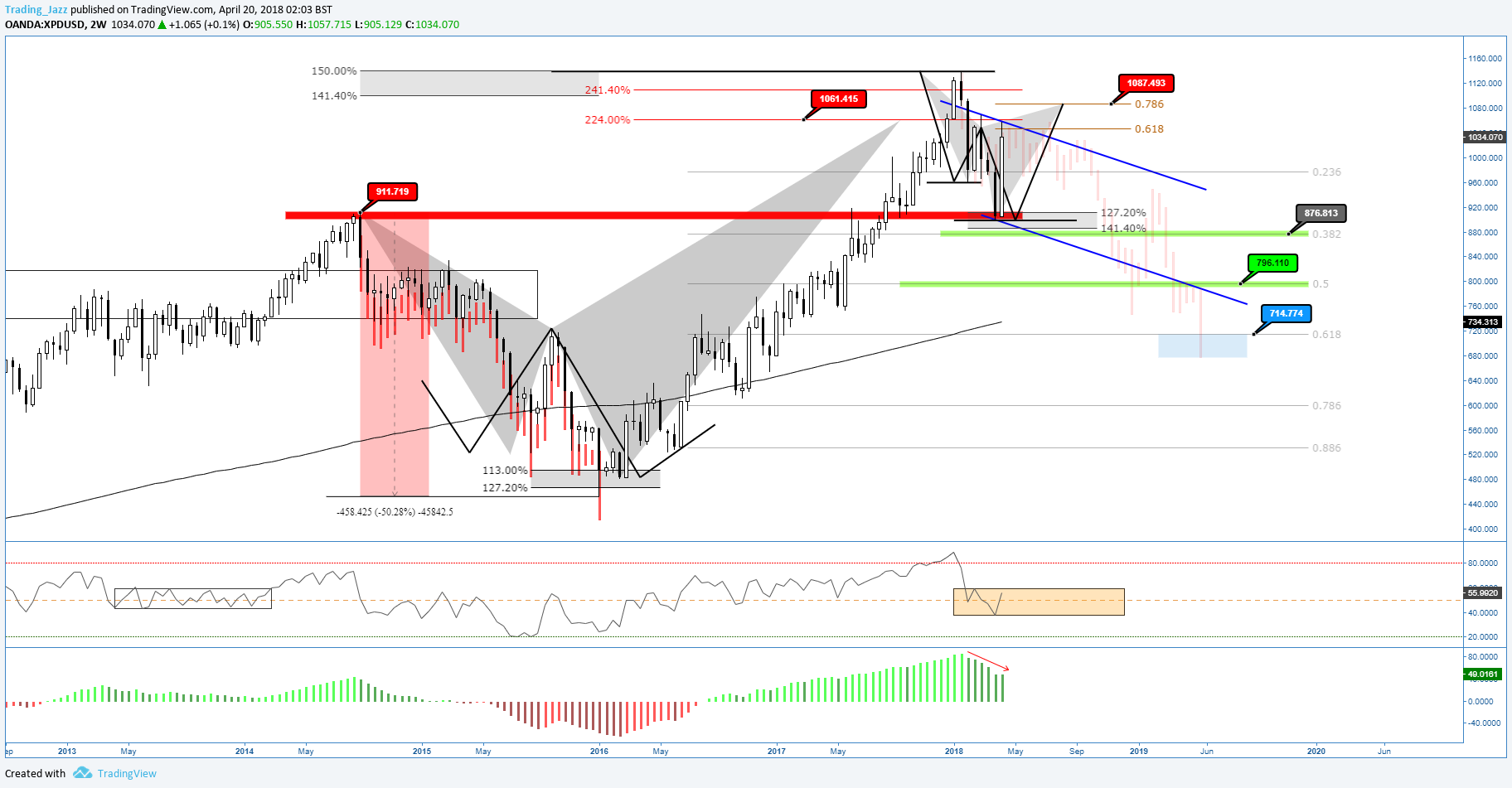 Equities volatility is back but have we actually seen the top?

The US Dollar squeeze higher may be over, now what?
Scroll to top