Equities volatility is back but have we actually seen the top? - ForexAnalytix - Blog
Click here to open Help

Equities volatility is back but have we actually seen the top?

You are here: Home / Equities volatility is back but have we actually seen the top?

Global equities had been on a 9-year rally since 2009, with the bottom being at the peak of the 2008 Global Financial crisis. This rally has been so strong that many global indices have gone up in a straight line, registering gains up to 300% over that time period with volatility hitting historical lows.

US equities in particular have been extremely strong as volatility was crushed to all-time lows and remained at extremely subdued levels for years. This monster rally was originally driven by the recovery post-financial crisis as valuations had become very cheap. However, if we look at the past 2-3 years, it becomes obvious that the rally was sustained for very different reasons. It was not necessarily driven by fundamentals and a super-strong US economy (although it must be said that the US economy exhibited some robust growth in the period between 2015-2017). Rather, the push higher in equities was driven by the abundance of easy money due to ZIRP & QE, as well as due to stock buybacks. Low interest rates have greatly encouraged and facilitated leverage & risk – so much so that by most metrics the major indices had looked overvalued.

It’s unavoidable that fundamentals always eventually catch up. Earnings have been showing signs of weakness for many sectors and forward P/E ratios simply cannot stay at historically high levels for a prolonged period of time. Technology firms in particular have been guilty of the latter for quite a while. Many major corporations had been financing equity buybacks by issuing low-coupon debt, a glaring example of this was Apple, who issued a long-dated bond even though they were sitting on a massive amount of cash. This is certainly not the sign of a healthy equity market and such actions distort the true neutral valuations of such companies.

At the end of 2017 US stocks had entered a “mania” phase and at least a corrective move lower was looking to be inevitable (the alternative being implosion). The 2018 sell-off has been quite violent and have caught many market participants off-guard, particularly the late-entrants in the retail sector. The combination of this sudden correction along with higher volatility and rising yields can be an explosive one; a 25-30% (or even more) correction from the peak for major indices shouldn’t be regarded as an impossible event. In fact, given the 9-year bull run, such a move would actually be a healthy correction for the long-term.

On a macro perspective, for US equities in particular, the US deficit and steadily increasing money/credit supply is itself a natural driver of higher equity prices. It’s no coincidence that the start the bull market in 2009 was at the same time as the start of the massive US balance sheet expansion. In the long run (decades-long horizon), as long as central banks finance big deficits and money & credit supply continues to rise, global equity markets should continue to rise. However, there will be occasions – such as the current period – where a decent correction will take place and market participants should always be prepared for this.

The S&P 500 Daily Moving Average. What’s a Currency Trader to Do?

Sometime in the near future, as a currency trader, we may be faced with the question “What do we do if the S&P breaks the 200dma?” And your question may be “Why does it matter what happens in the S&P and what makes the 200dma so important?”

Let’s tackle the latter first. In the land of technical analysis, there are so many vast indicators for us to use, so why is the 200DMA so important? Well, the simple answer is that everyone looks at it. No matter if I am using stochastics, Fibonacci ratios, Gann lines, RSI, etc. to trade the markets, there is one thing that I know everyone is looking at: the 200DMA. The 200DMA is the 200 period daily (simple) moving average. There are simple and exponential moving averages, but the more “standardized” average that most use and analyze is the simple moving average. If you want a good explanation of what a 200DMA is, click HERE for investopedia’s definition.

For me, the 200DMA is important, and I like to look at the daily chart at least once a day (despite being a very active trader) so I can get a gauge how far or close we may be to it for that specific pair or trading vehicle I am performing analysis on. But what is most important to me is if I recognize an instrument that is hugging/respecting/breaking a 200DMA. And on top of that, if it is a major index (like the S&P) I have to take extra notice and then figure out how it may affect the currency market.

Let’s take a look at the S&P below:

From what I am reading (bank research, talking with traders, etc.) everyone is looking at this chart. Universally everyone seems to agree while above it, the bulls are in control, but below it could be a bearish inflection point for the broad market.

Since we have spent this whole week, and the last month testing and being supported by the 200DMA, the trade (in FX) has been when we test it, buy the XXX/JPY pairs. Since in the FX market, when you get a bounce in risk appetite (i.e stocks bounce higher) if you got long XXX/JPY pairs for a day or two (or three) you may have made some decent gains.

Since we have tested the 200DMA in February, and this month in March. What happens if we finally crack lower? What’s our plan then?

In my opinion, it is the same plan, but in reverse. Shorting the XXX/JPY seem to be the right trade. If you look at the USD/JPY, you can see that longer term we have broken lower out of a triangle formation. As long as this pair remains below the 108.00 level.  Just this week we had a sharp short squeeze in the pair due to end of quarter rebalancing, and positions may be more “square” now in the coming weeks. What I mean by that is that there are probably less shorts in the market now that 1-2 weeks ago. 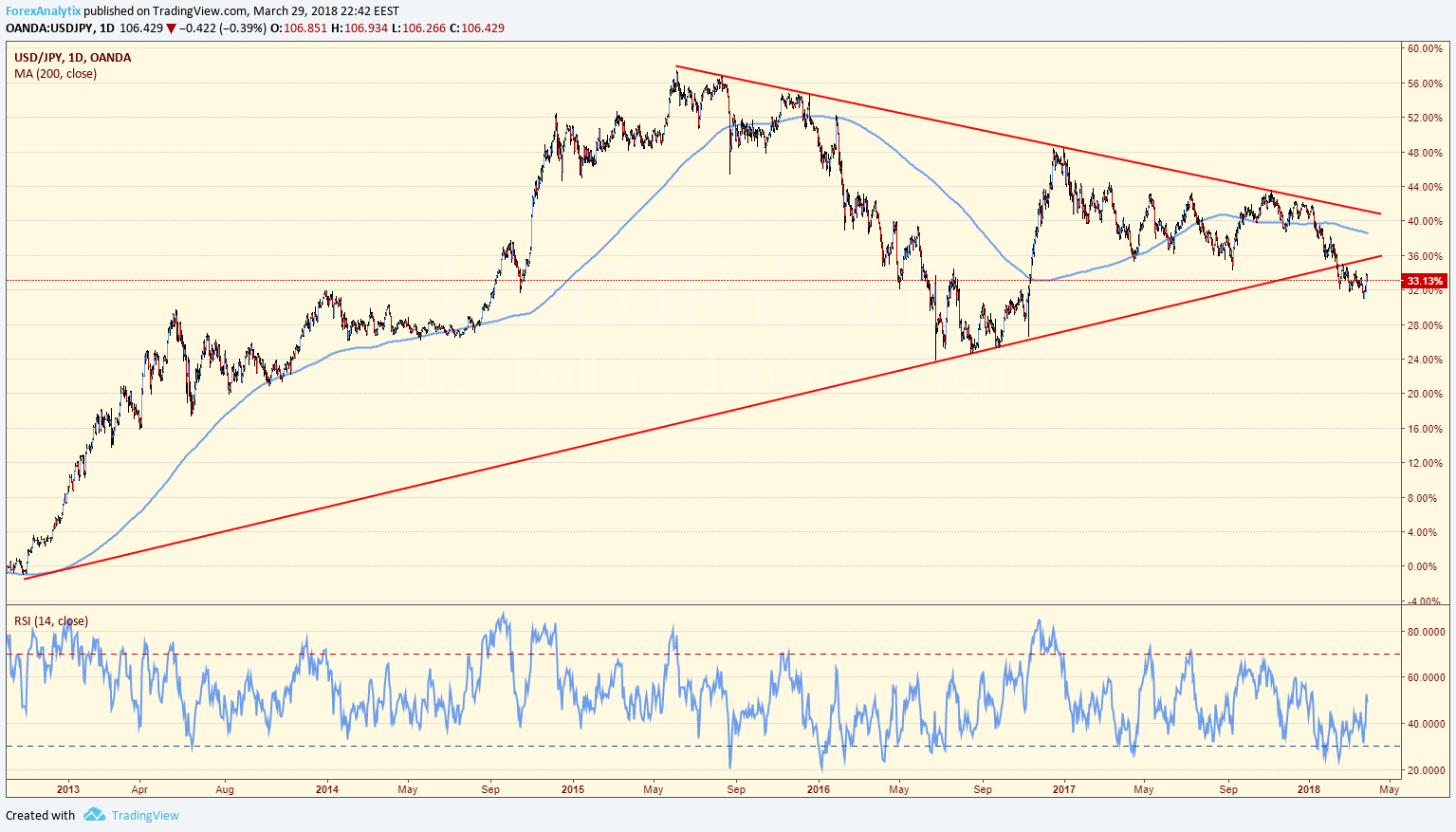 What is really interesting is the following chart. Take a look how the XXX/JPY pairs have been divergent to the S&P, especially since the bounce off the 200DMA in February to recently: 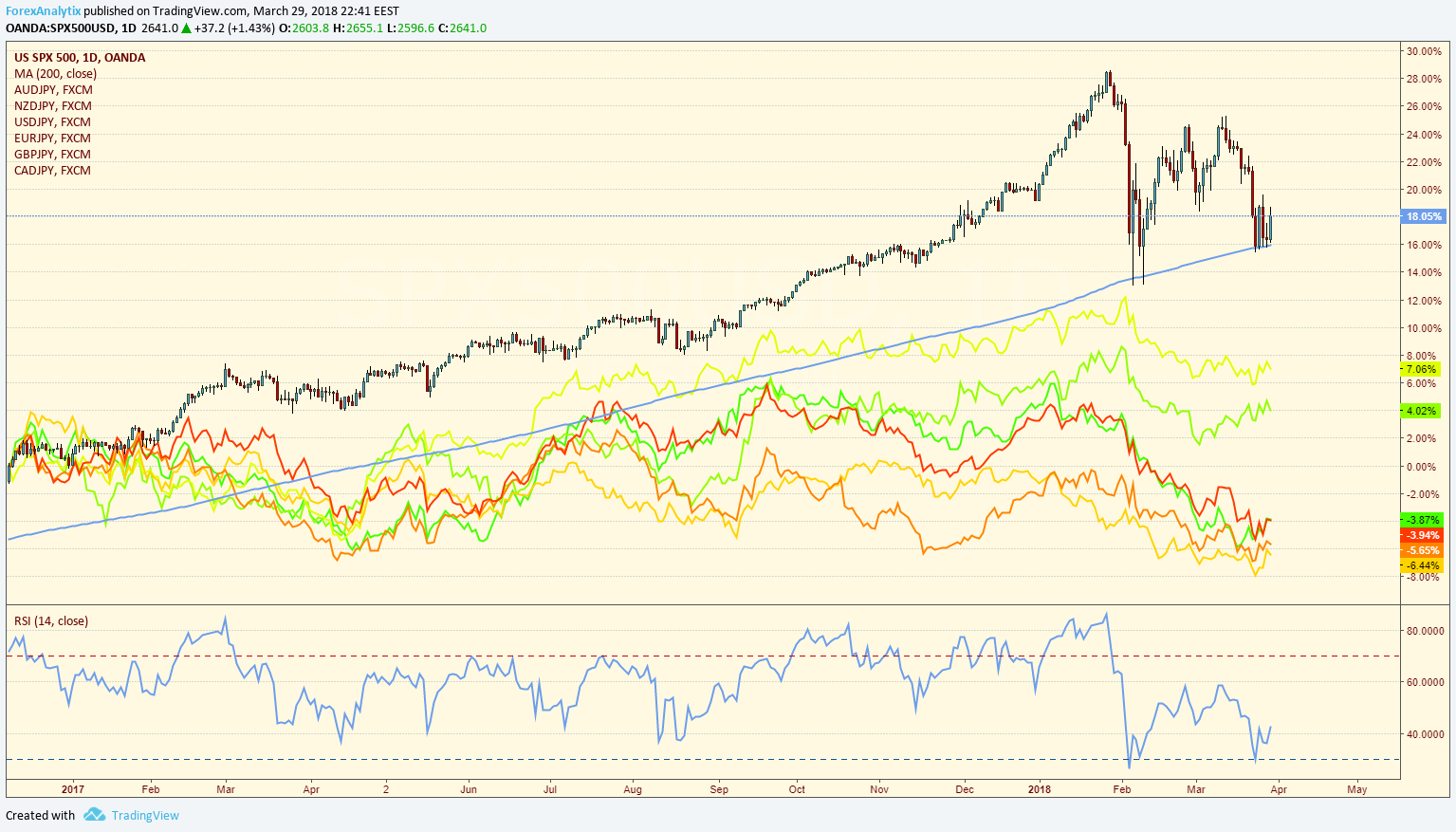 Double bottom at 78% fib retracement, above the daily 200MA and above the weekly median pitchfork with a neck at 2676 at 38% fib retracement.
In order to validate a double bottom as a potential reversal behavior the price needs to close above the neck at 2676 and print a resistance above it. The 61.8% fib at 2717 should act as the next resistance/pressure zone above the neck, synced with previous small consolidation period forged between March 19 bottom and March 21 top, eventually searching for the 200MA now as resistance or a retest to the previous structure highs as a deeper pullback at 88% forming the bearish bat pattern. 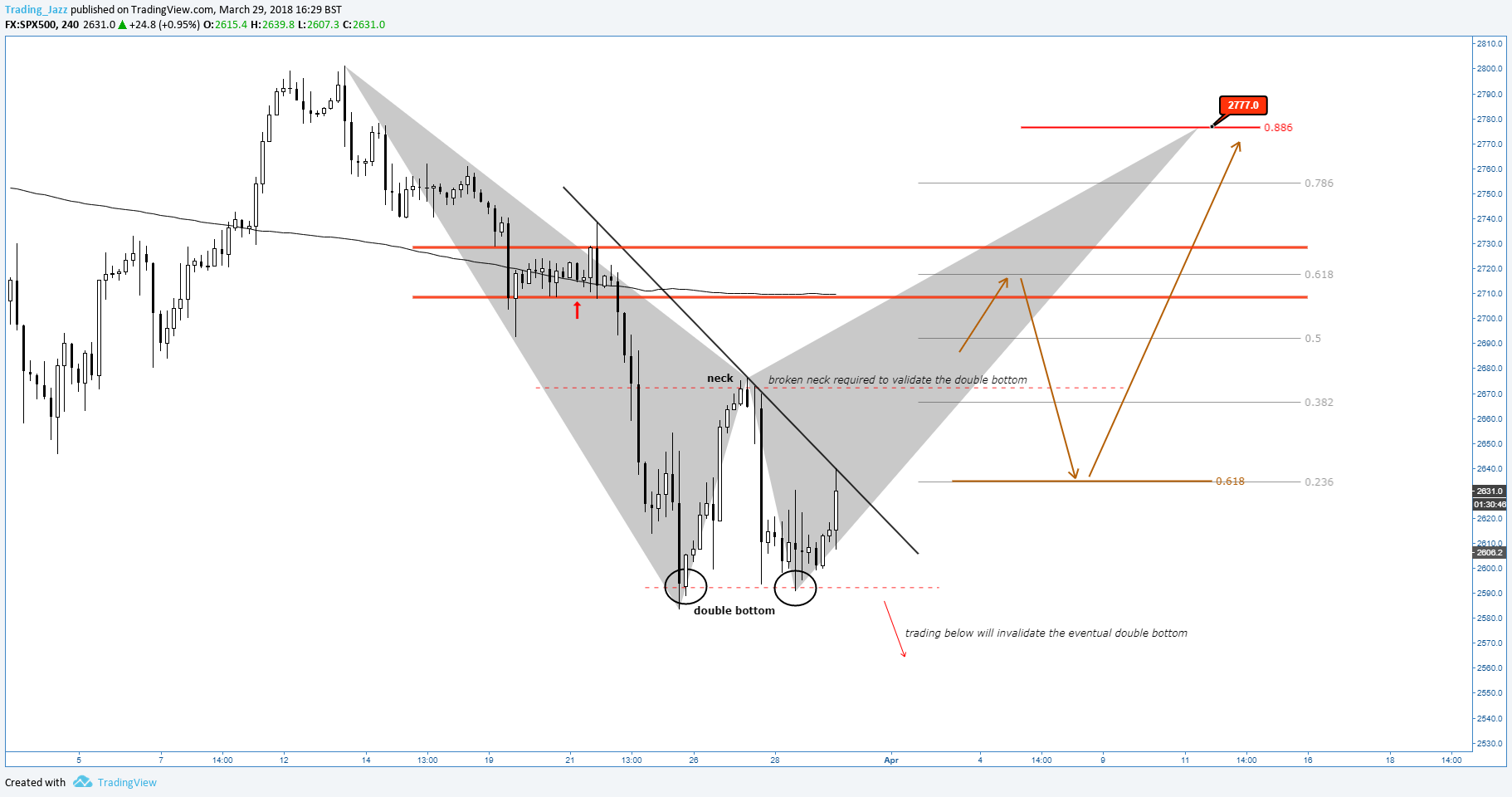 If the price fails to hold above the 200DMA and above the previous structure support at 2529, the bullish shark pattern at 2453 at 224% fib extension (confluence with major fib at 38% from Feb 2006 bottom and the next pitchfork level*), should offer some bullish pressure which can also force the price to push back again to retest the broken structure support (and the previous broken pitchfork level) and turn it into a resistance. The shark pattern will target the 50% fib retracement by default, which will put the price again retesting the 2629, and one symmetrical bearish projection from this level for one eventual ABCD pattern will put the price at 50% around 2342, the pitchfork major support.

* For a clear picture of the pitchfork levels check the weekly chart. 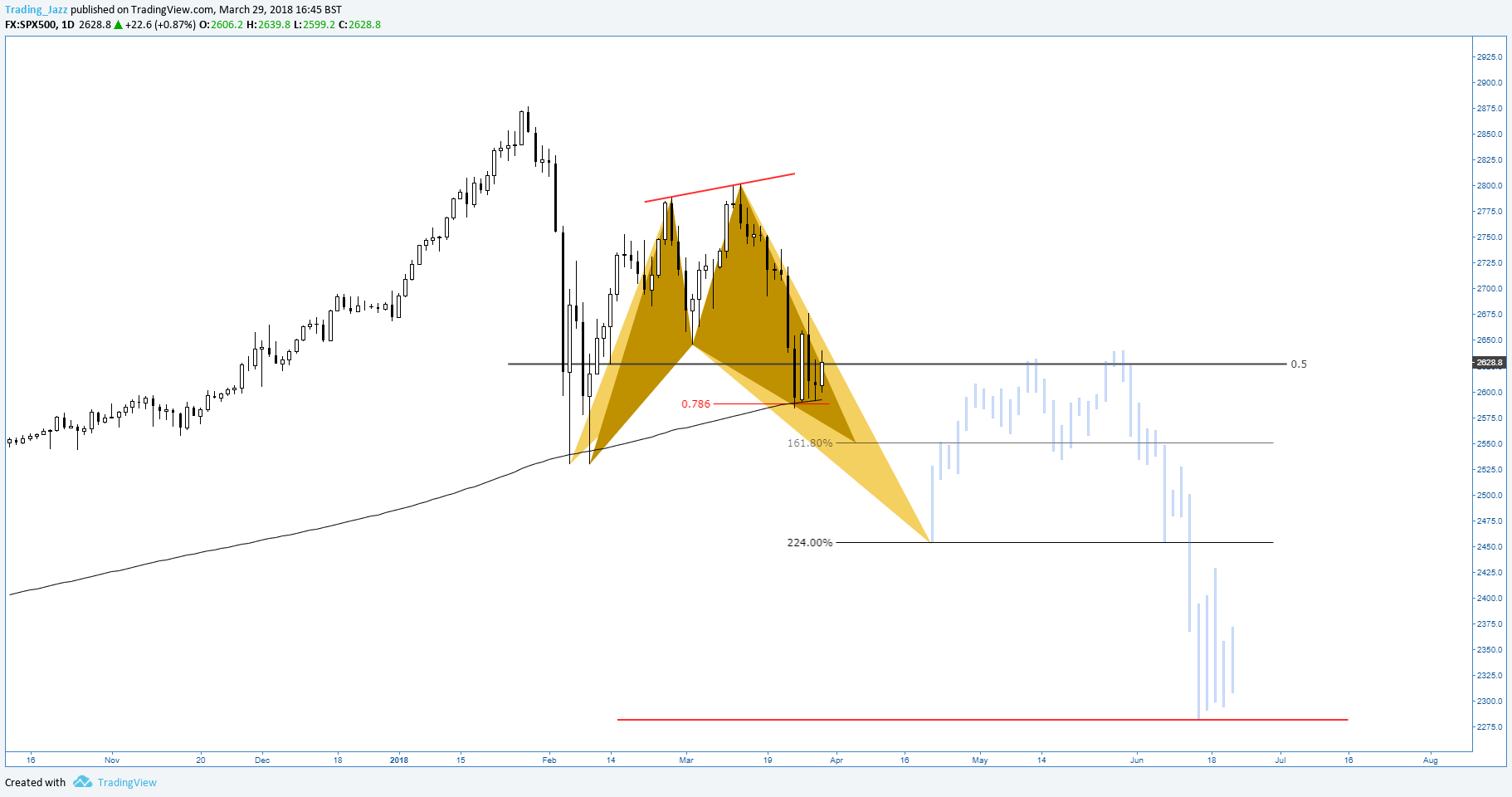 With the pitchfork median as support, all eyes are focused on that 200DMA. Trading below should force the price to sink, searching for the next pitchfork level and/or eventually to reinforce a new ascending trend-line around the weekly 200MA close to the 2200 level, representing a full and deeper pullback correction of 20.65% since Jan 29. Nothing strange if we consider the previous major corrections were: 49% for March 2000 and a massive 57% correction for Oct 2007. 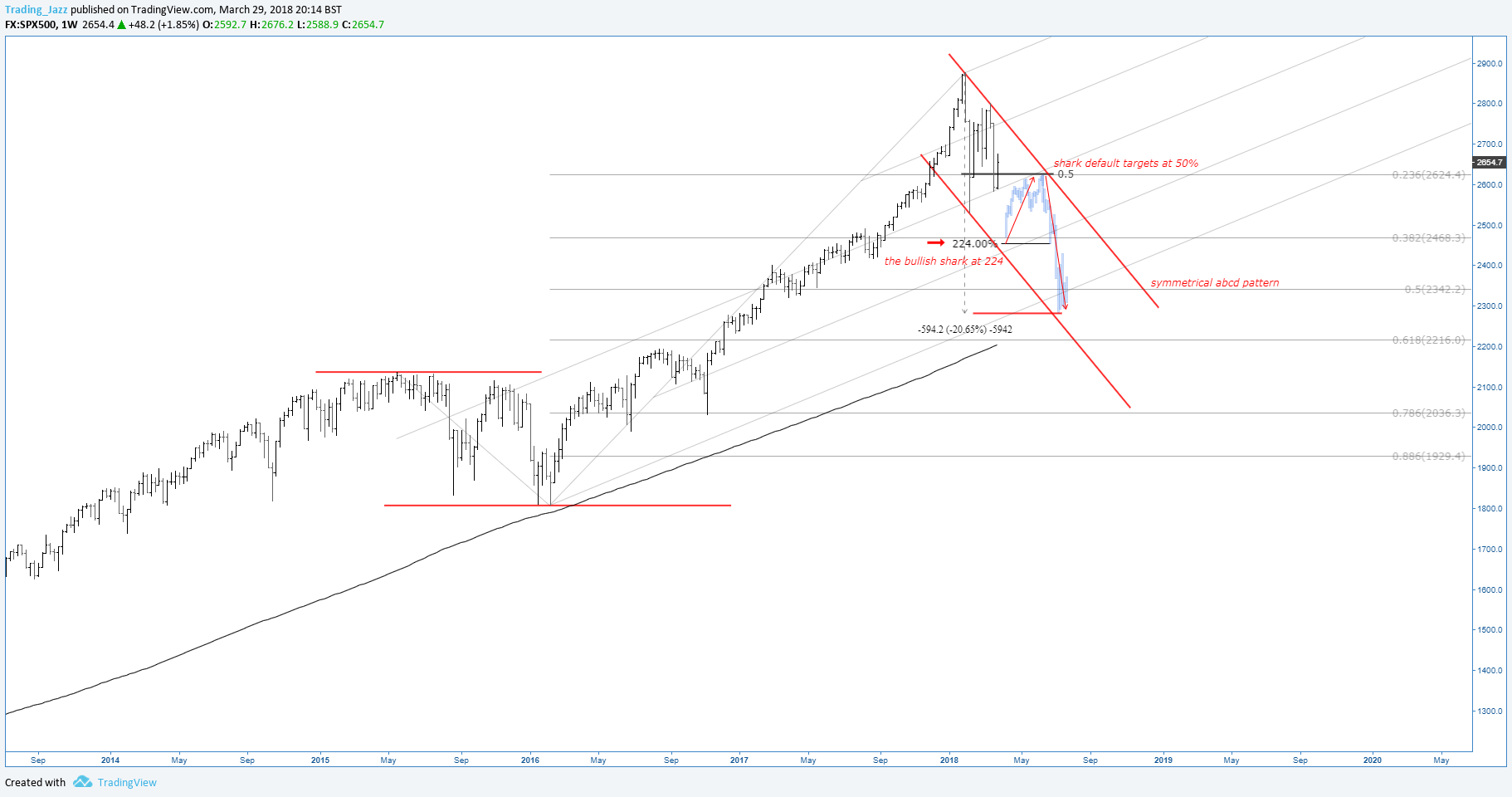 Do the Italian Elections pose a risk to the EZ recovery and affected assets...