Do the Italian Elections pose a risk to the EZ recovery and affected assets? - ForexAnalytix - Blog
Click here to open Help

Do the Italian Elections pose a risk to the EZ recovery and affected assets?

You are here: Home / Do the Italian Elections pose a risk to the EZ recovery and affected a...

Sunday the 4th March is the day of the 2018 Italian parliamentary elections, and this has been a highly anticipated event.

We’re going to discuss the various outcomes and their probabilities, but first we’re going to talk about the current market sentiment. In 2016 and 2017, the Italian elections had been viewed as a potentially explosive event, which could destabilise Italy and Europe (Italy’s weak economy at the time, coupled with the banking sector’s troubles didn’t help the situation for sure). However, in the past few months sentiment has calmed down a lot and it seems that the markets believe that the most likely election outcome will be a positive one. Is this a realistic prospect or could there be a surprise in store?

Italian politics have been on the ropes since Renzi’s government collapsed just over a year ago and Paolo Gentiloni took over. The main players in the upcoming elections are well known and relatively clear with their agenda:

Without doubt, the best scenario for Italian and Euro stability & continuity is either a DP government or a DP-led coalition. That’s the most likely outcome as per the markets, but with Berlusconi’s momentum it’s certainly not a given.

In case of a Forza Italia coalition win, things start to get a bit more complicated. If this scenario materialises and Forza gets more votes than Lega Nord then that would also be a relatively benign result. Tajani as PM will undoubtedly bring calm and stability in a pro-EU environment. The real problems would start if the Forza/Lega coalition wins and Lega get more votes than Forza – this would mean that Salvini would be PM with the balance of power on his side. This would be a negative scenario for Italy, the Euro and risk in general. Overall, given Berlusconi’s unpredictable character, any government which involves him could be considered as a risky one.

Finally, possibly the most negative scenario would be for a 5SM/Lega coalition government. This is quite unlikely given the recent poll results, but we have all seen polls being very wrong in recent years. In such a scenario there would be great uncertainty regarding future Italian / EU policy, with both parties reinforcing each other’s extremes and creating a potentially explosive situation.

Having outlined all the major scenario outcomes, we must also consider the fact that the Italian electoral law changed last year. When Gentiloni was appointed PM in December 2016 he was the fifth PM in five years, with none of the parties or coalitions being able to gain enough seats to govern during that time period. As a result, there have been even bigger coalitions needed in order to form governments, and this invariably leads to differing opinions and political instability.

In the new system there are two votes, one for the 630-member Chamber of Deputies (Lower House) and one for the 315-member Senate (Upper House). The top party in each vote will get allocated around 1/3 of the seats, with the remaining 2/3 being allocated proportionately. This allocation encourages similarly minded parties to group together in coalitions rather than splitting the vote, and hence it makes it more likely for majority governments to form. The 5SM had been strongly opposing this reform, since they prefer not to form coalitions and feel that this new law puts them at a disadvantage.

In summary, there are many different potential election outcomes, each with its own particularities and probability. The worrying part is that the markets are pricing a very low chance of a negative scenario unfolding – this is indeed the most probable outcome but surely a higher probability event than is currently priced in. For this reason, it’s probably a very nice risk/reward trade to be short Euro going into Sunday. Either way, Europe is bracing for yet another election result which could spring a negative outcome – so far previous elections such as in Germany and France have dodged trouble, will this time be the same?

A technical view of the affected markets

The EUR/USD pair has been in a downtrend since peaking (and posting a false breakout) above the 1.2550 level. Since then we have broken an up channel and are quickly approaching the breakout point from the highs of 2017, near 1.2100. The 1.2100 level also coincides with the long term (dotted) trend line which may offer some strong support following the election.

If you are a EUR/USD bull, looking for long positions near 1.2100 will probably offer the best risk/reward setup. 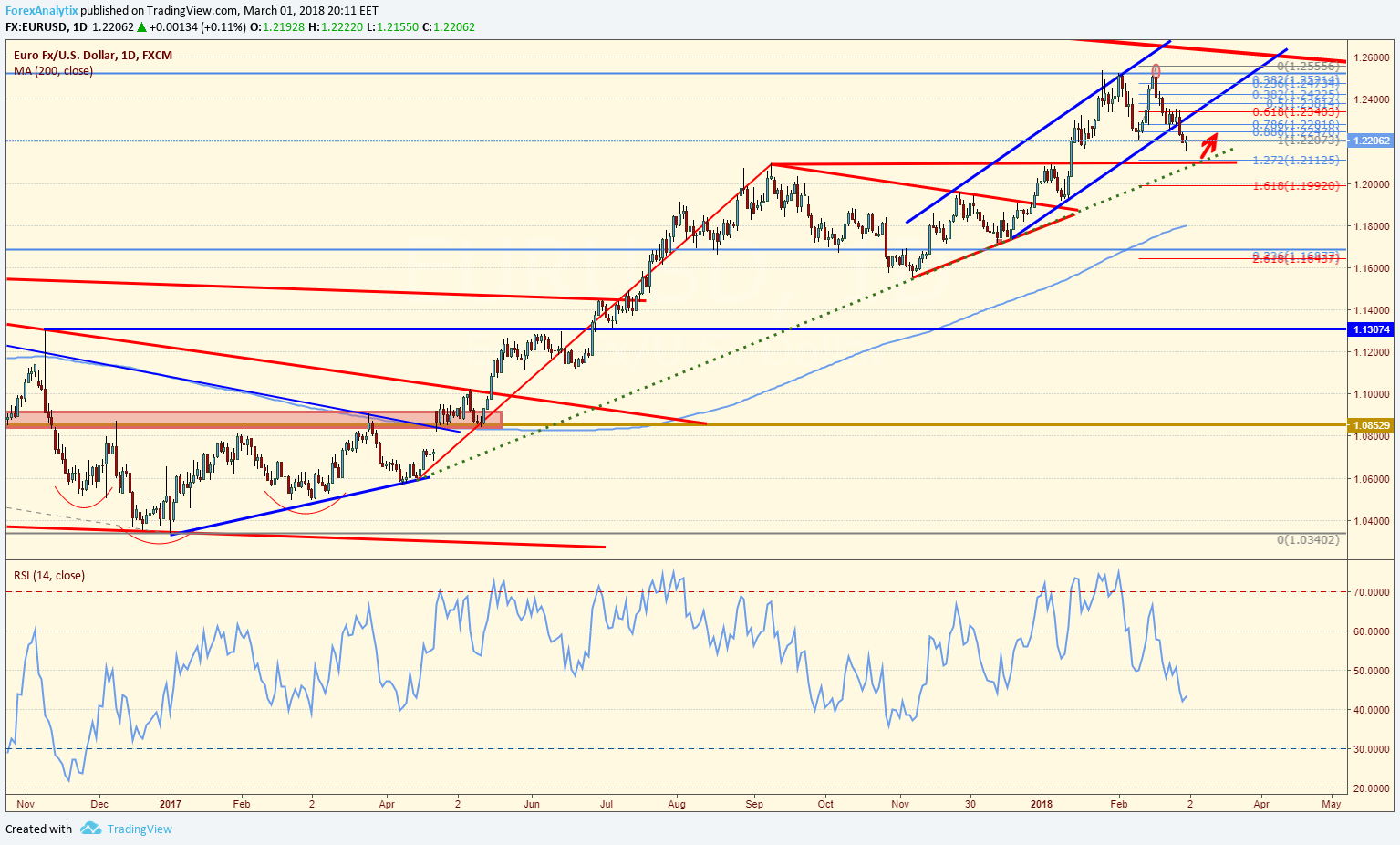 EURUSD from an Elliott Waves Perspective

The markets work in cycles from pessimism to optimism and vice-versa. Those cycles are easily observable across all asset classes. The best tool to analyze such cycles in advance is to look at the Elliott Wave pattern. The Elliott Wave model is a five wave advance and three wave pullback, so it’s like three steps forward, two steps back and so on.

As I look at EURUSD and listen to different traders and investors they are all very bullish after the 2017 strong move up which was without a doubt a very good year for the euro. That move brought a lot of new market participants that joined the bullish cycle late, at the start of 2018. But if you look closely you will notice that the advance of the last few months is a fifth wave up of an Elliott Wave model. In fifth waves the market is very optimistic, and normally when that’s the case it’s time to be prepared for something opposite; a turn. In other words a five wave cycle can come to an end rather soon. Regardless. another leg up is in the cards prior to a turn, but watch out for that Fibonacci resistance zone at 1.2650 where bulls may slow down and even prove to be the turning point in the second quarter. 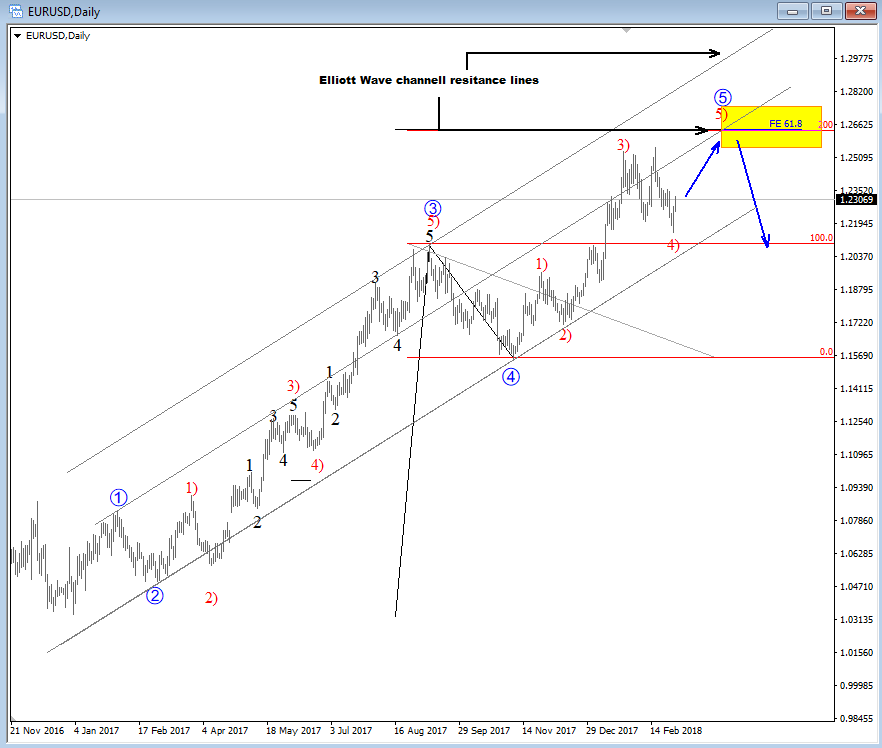 The BUND has recovered significantly since finding a low 4 weeks ago and part of this move can be attributed to the uncertainty the Italian elections have brought to the EZ as a whole. Although we remain bearish in the L/T we had warned with our previous blog post that a rebound was very likely in the S/T. A positive outcome will help the Bunds find a high nearby (watch the 50% Fib of the last leg lower at 160.57), while a negative outcome should provide fresh momentum to the recovery pushing the BUND higher, towards the 162.50 area before likely failing. 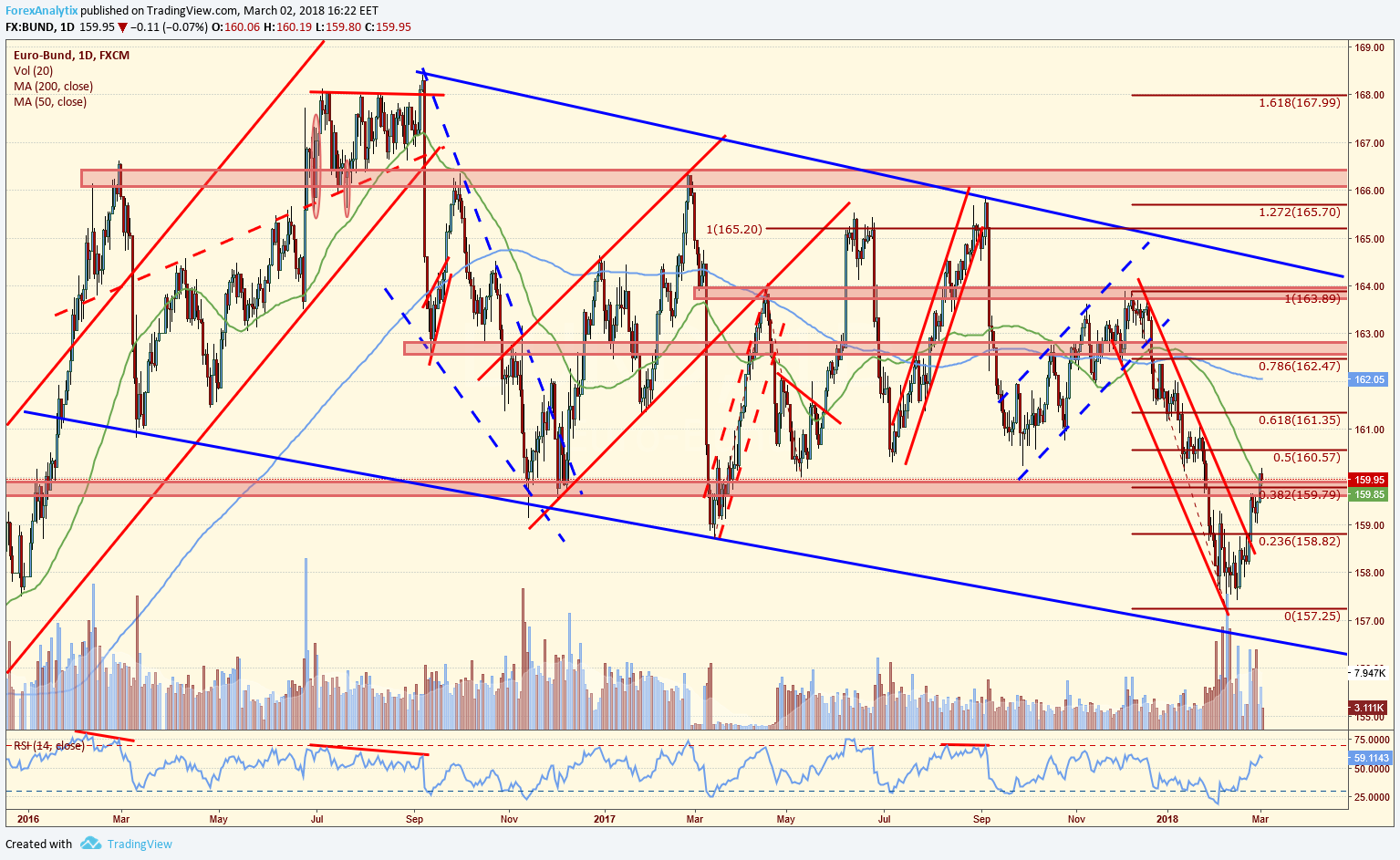 The DAX has been leading risk lower since the 23rd of January, unsurprisingly after falsely breaking up to new highs briefly. The S/T recovery that we saw after the waterfall kind of move lower has failed this week at the confluence of the 38.2% Fib and the expanding triangle’s support (acting as resistance). Ahead of the elections the DAX is approaching the 11800 horizontal support / resistance area which also confluences with an ascending T/L support that dates back to the beginning of the last bull leg that started 2 years ago. An Italian elections outcome that will be consider positive from the market will help the DAX hold this area of support while a negative outcome will likely push risk lower slicing through that area and threatening to put in jeopardy the bull trend. 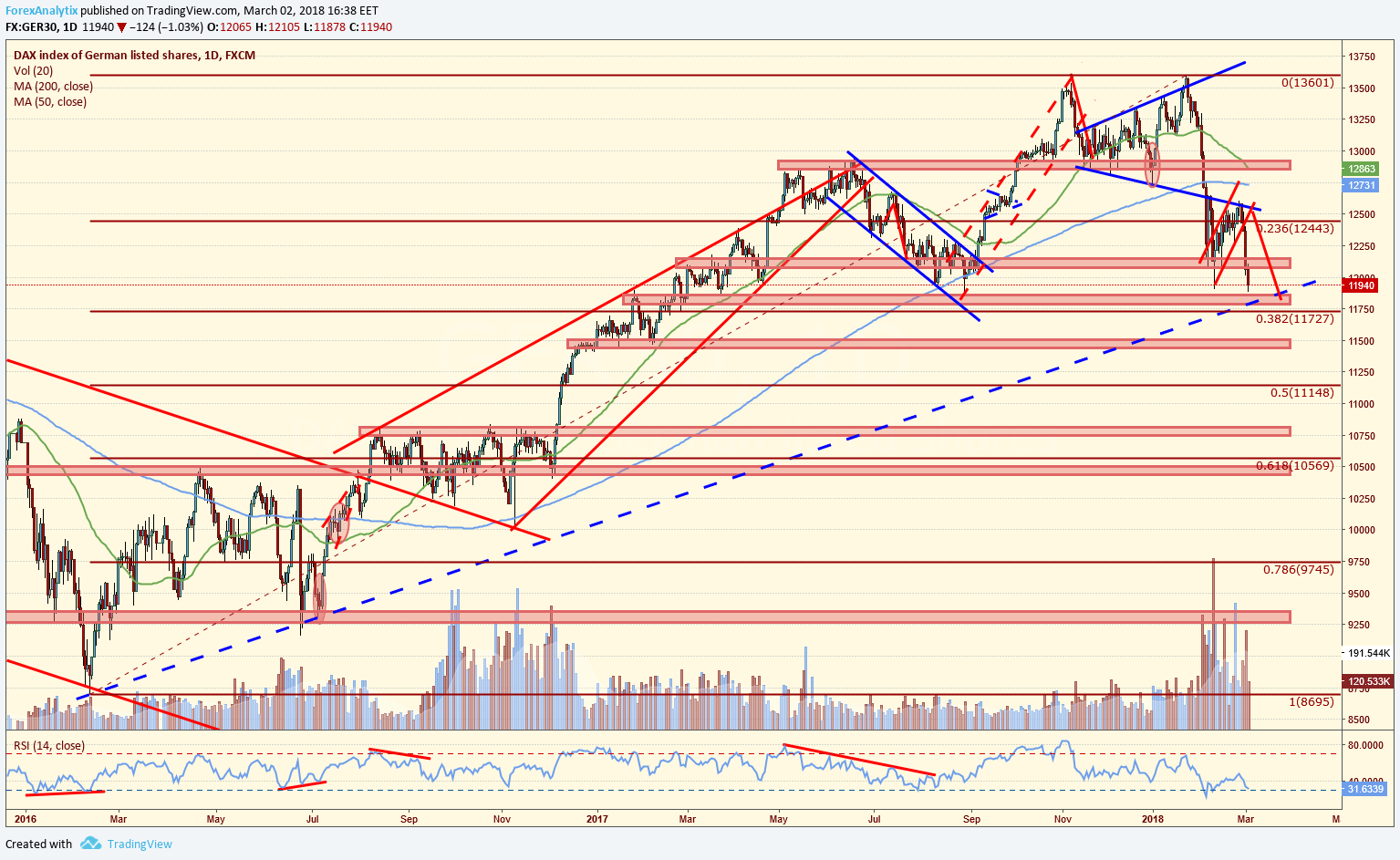 Is the market’s fixation on Bonds justified?

Equities volatility is back but have we actually seen the top?
Scroll to top