Is the market’s fixation on Bonds justified?

You are here: Home / Is the market’s fixation on Bonds justified?

Global bond markets had been in a bull market for around 2 decades, having had arguably their best run in history. This has been a prolonged and strong trend, which at times looked unstoppable. Many benchmark government bonds yielded zero or negative, something unheard of a few years back. In the past few months, however, it looks like we may be seeing signs of what could be interpreted as the start of a major reversal.

One of the main themes of late 2017 and early 2018 has been that of rising inflation, as it started to creep higher in many major economies. There are many reasons why inflation was always going to eventually reverse from ultra-low levels. Nearly a decade of extraordinarily loose monetary policy after the Global Financial Crisis, inflation and interest rates remained near all-time lows. However, the prolonged ZIRP & QE made money very cheap and this encouraged risk-taking and leverage. As a result, most asset classes (including equities, bonds, real estate etc) saw strong rallies. Such a rise in asset prices would inevitably lead to a rise in demand-based inflation.

The UK saw a sharp depreciation of the Pound (~15% vs. majors) following the EU referendum and the ensuing uncertainty. This currency depreciation gave rise to a different kind of inflation, but it nevertheless was increased inflation. The UK YoY CPI now stands at 3.0% – a full percentage point above the BoE’s mandate – and this has forced the BoE to start raising rates to counter it. The US will probably experience a similar inflation move as the USD depreciated a similar amount since early 2017. We’re already starting to see this manifest itself in PPI levels, and chances are that this will spill over to headline inflation as well. We must remember that the only major obstacle that makes the Fed cautious about continuing to steadily raise rates has been below-target inflation. It’s likely that inflation will now pick up and surpass the 2% target, and this will make it much easier for the Fed to keep going.

Finally, we mustn’t forget oil and energy. After the big 2014 crash where WTI dropped $80 from the $107 highs within 2 years (a near 75% loss!), we finally started to see a good run higher in mid-2017. Oil price rose from $45 to over $60 and, since oil is a major price element of most industries, rising energy prices always filter through to end product prices.

So, turning to 10y USTs and 10y Bunds in particular, what are we seeing on a macro level? There’s little doubt that we are turning the page on zero and negative yields. As described above, inflation is likely to continue rising globally and this will pile the pressure on bonds. It will take a huge crisis (like the 2008 global financial crisis) for bond yields and inflation to drop significantly again. On a technical level, both TSYs and Bunds have broken important levels and look vulnerable.

It’s likely that both TSYs and Bunds will have a near-term pullback higher to retest the broken technical levels, but the medium term macro view is firmly bearish. 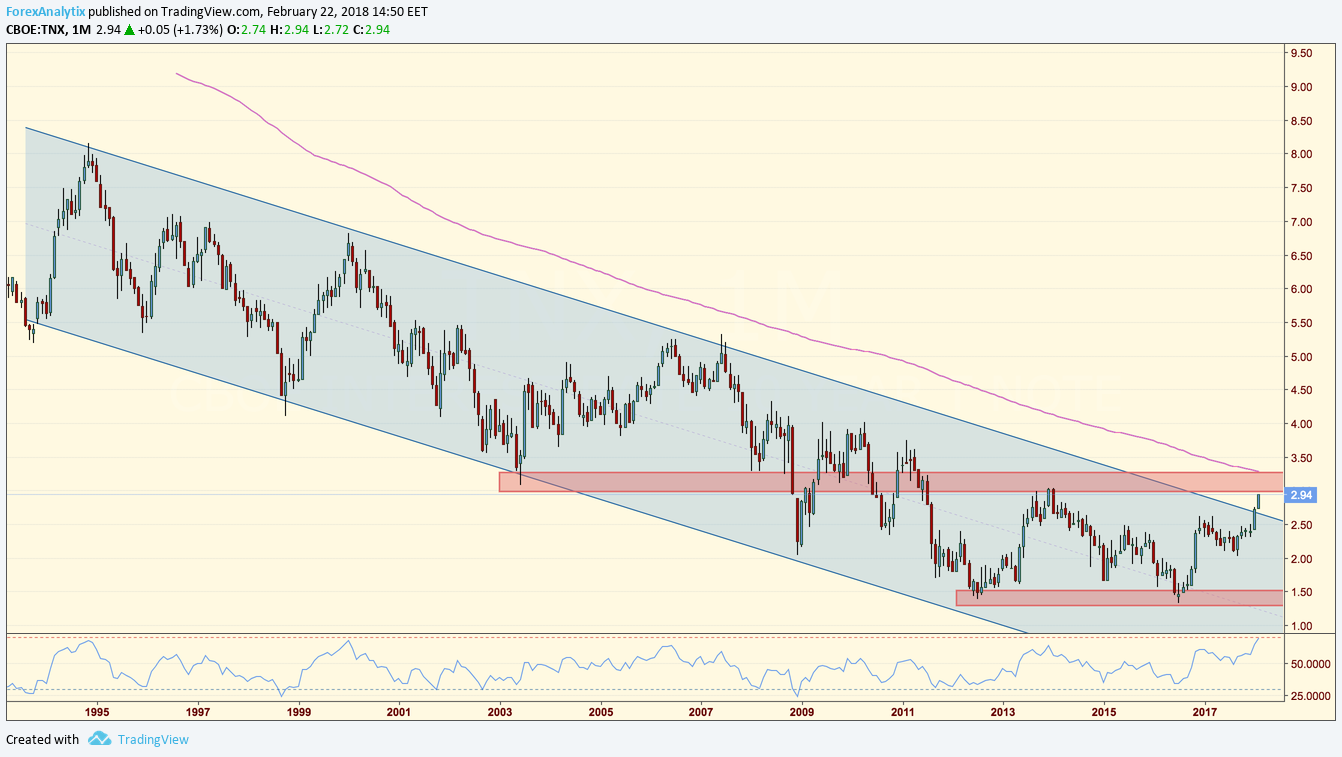 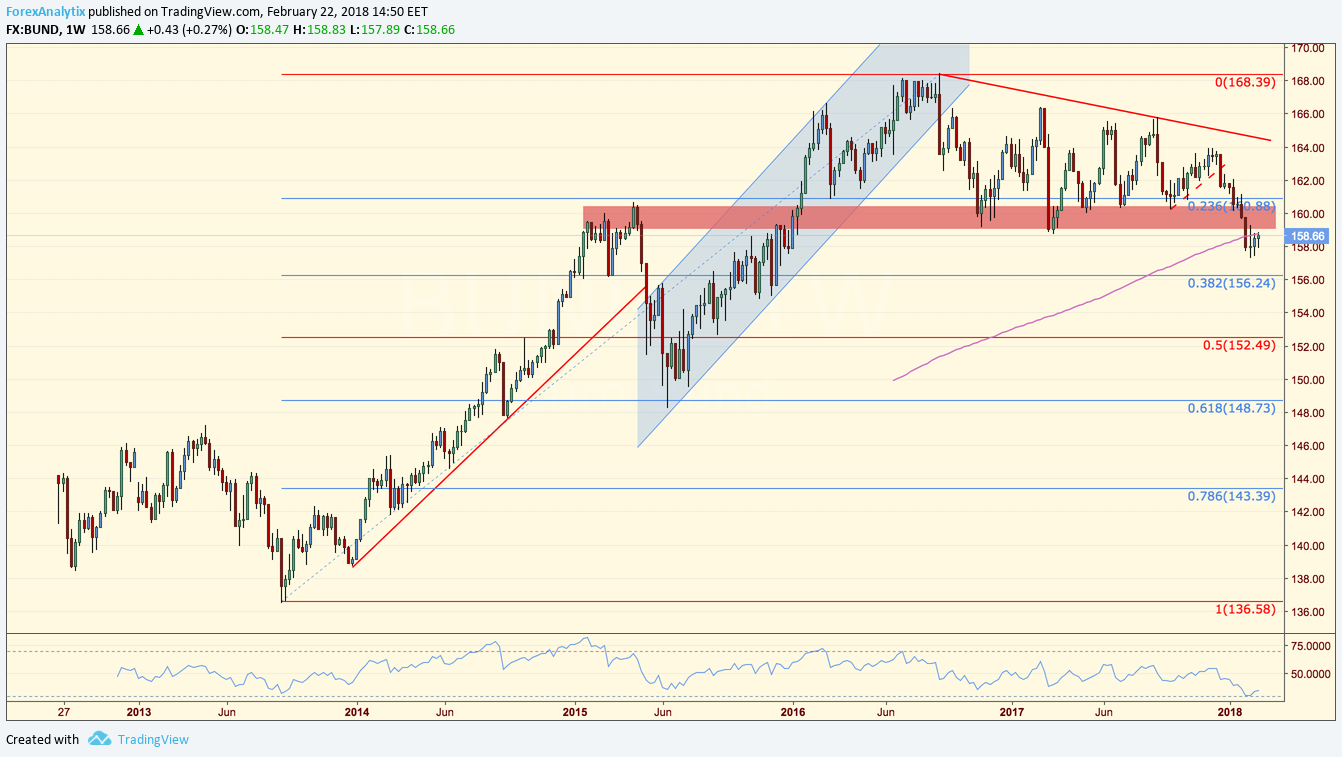 Treasuries found a top in July 2016 and have been moving lower since. The 9 month rebound that we saw during 2017 is clearly a corrective move that took the form of an ascending wedge and the break below 126 and the 200DMA confirmed that the D/S momentum was ready to accelerate. Given the prolonged nature of the bull market, the potential for the move lower to extend much more is there in the long term. However, a look at the short term structure of the market shows that we might first need to experience a sharp recovery. The market has hit the 161.8% extension of the corrective move higher and has formed a descending wedge which we are finally breaking to the upside today (Feb. 23rd). Also notice that RSI is diverging on the daily and we have formed a tweezer bottom on the weekly chart. Given that both sentiment and positioning are very bearish for the specific market the potential for a squeeze higher towards the 123 area is high and we would caution against attempting short positions from current levels since the risks are asymmetric in comparison to the potential reward. 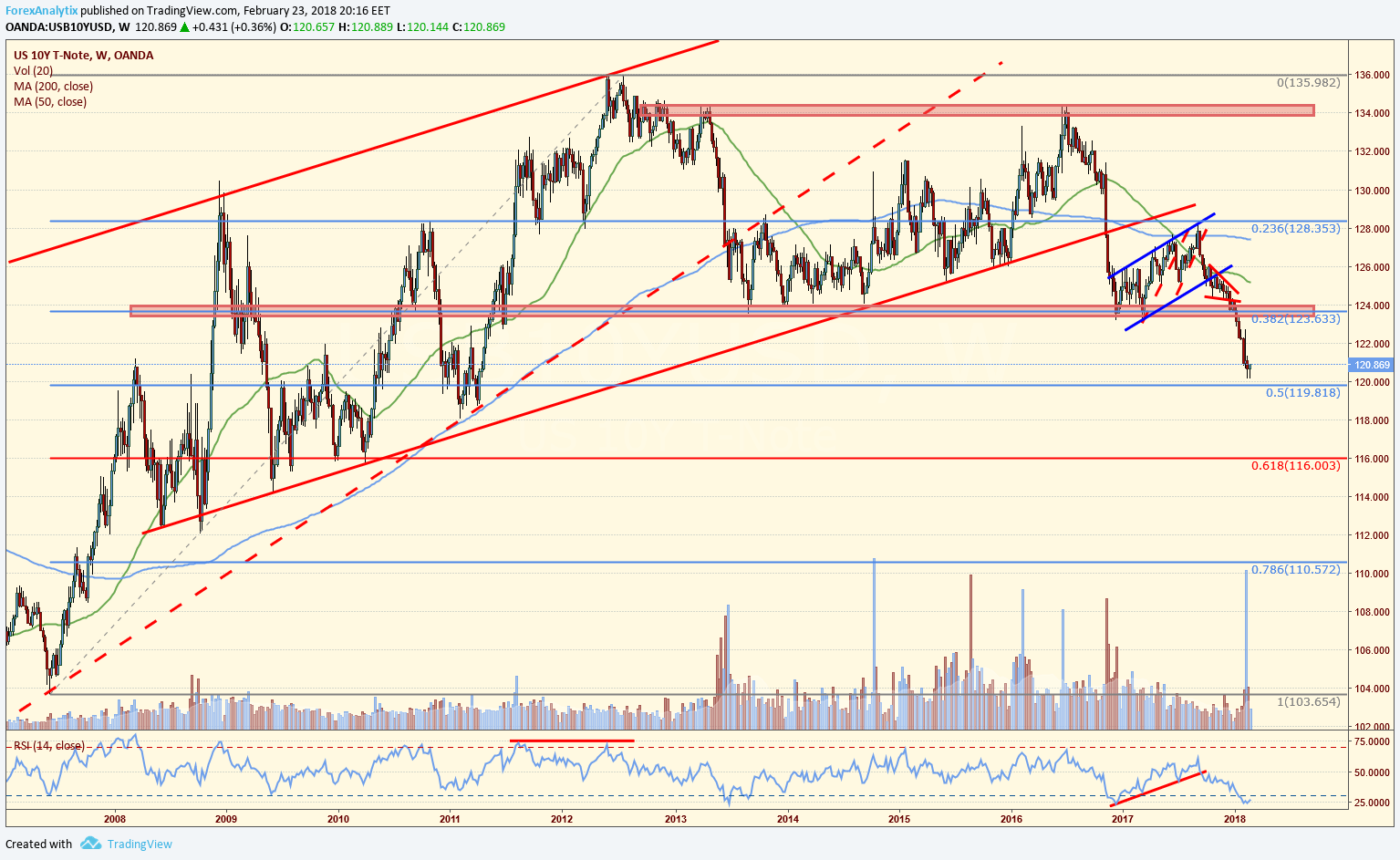 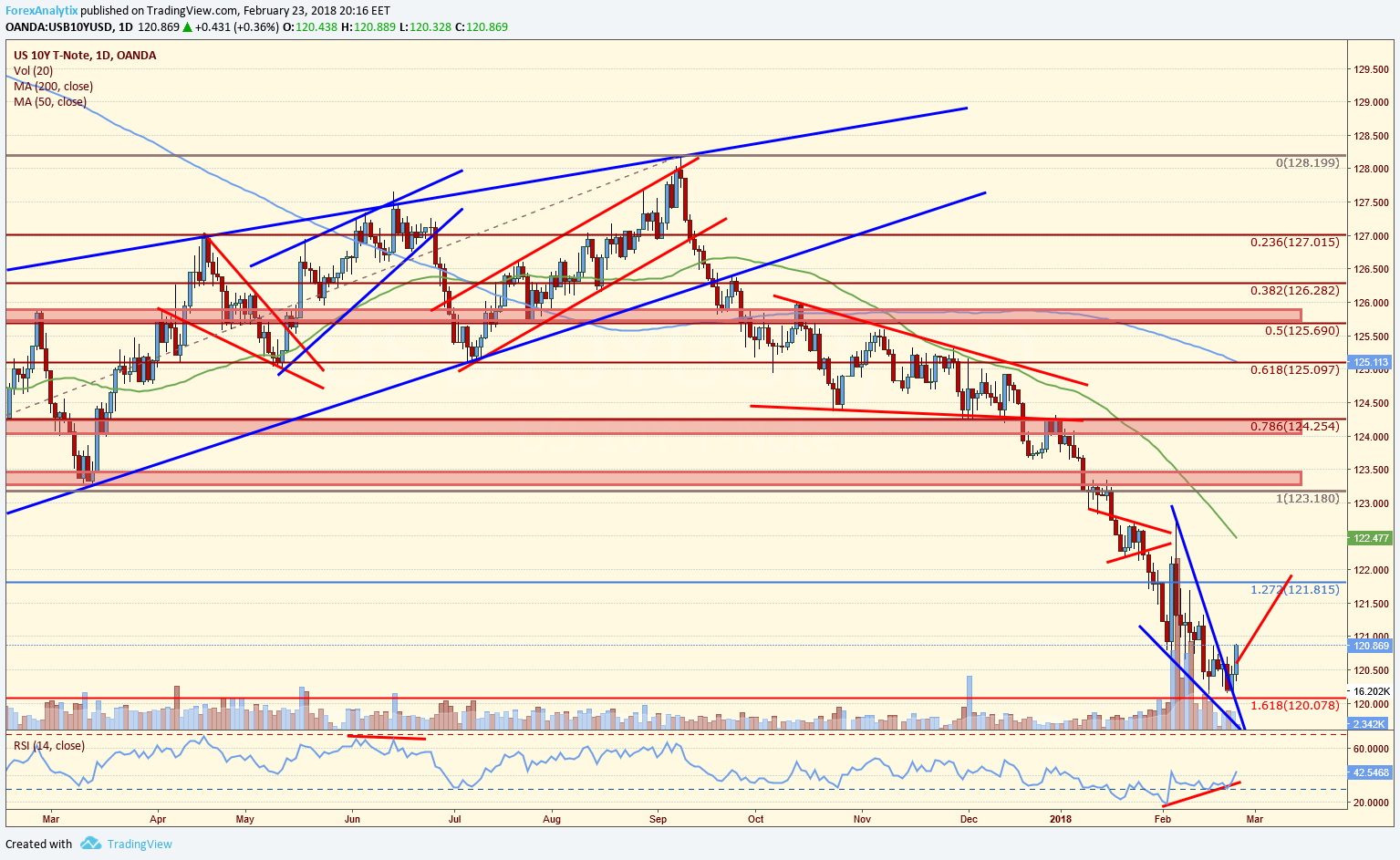 The BUNDS have been in a relentless, channeled bull market since mid 2008 that lasted for exactly 8 years (we found a top in June 2016). Ever since we have seen a move that looked corrective in nature (flat bottom triangle) until in the end of January we actually broke below both the triangle’s support (159.25) and the ascending channel’s support T/L. Obviously such a technical event did not go unnoticed and built even higher expectations of follow-through to the D/S. Unfortunately the S/T market structure does not agree with such an interpretation since the last leg of the move lower was contained in a channel – and within the channel Bunds formed a descending wedge which broke higher last week. Today (Feb. 23rd) we also broke above the descending channel’s resistance and the breakdown area of 159.25 putting in danger the thesis that the BUNDS have snapped. Given that the false break lower might have gotten a lot of traders trapped in weak short positions the possibility of a strong rebound before a continuation lower has increased. Bottom line, we do see the potential of a larger move to the D/S to unfold during the next few months but in the S/T the risks are titled to the upside for a S/T rebound towards at least 160.50 (previous bearish consolidation area). 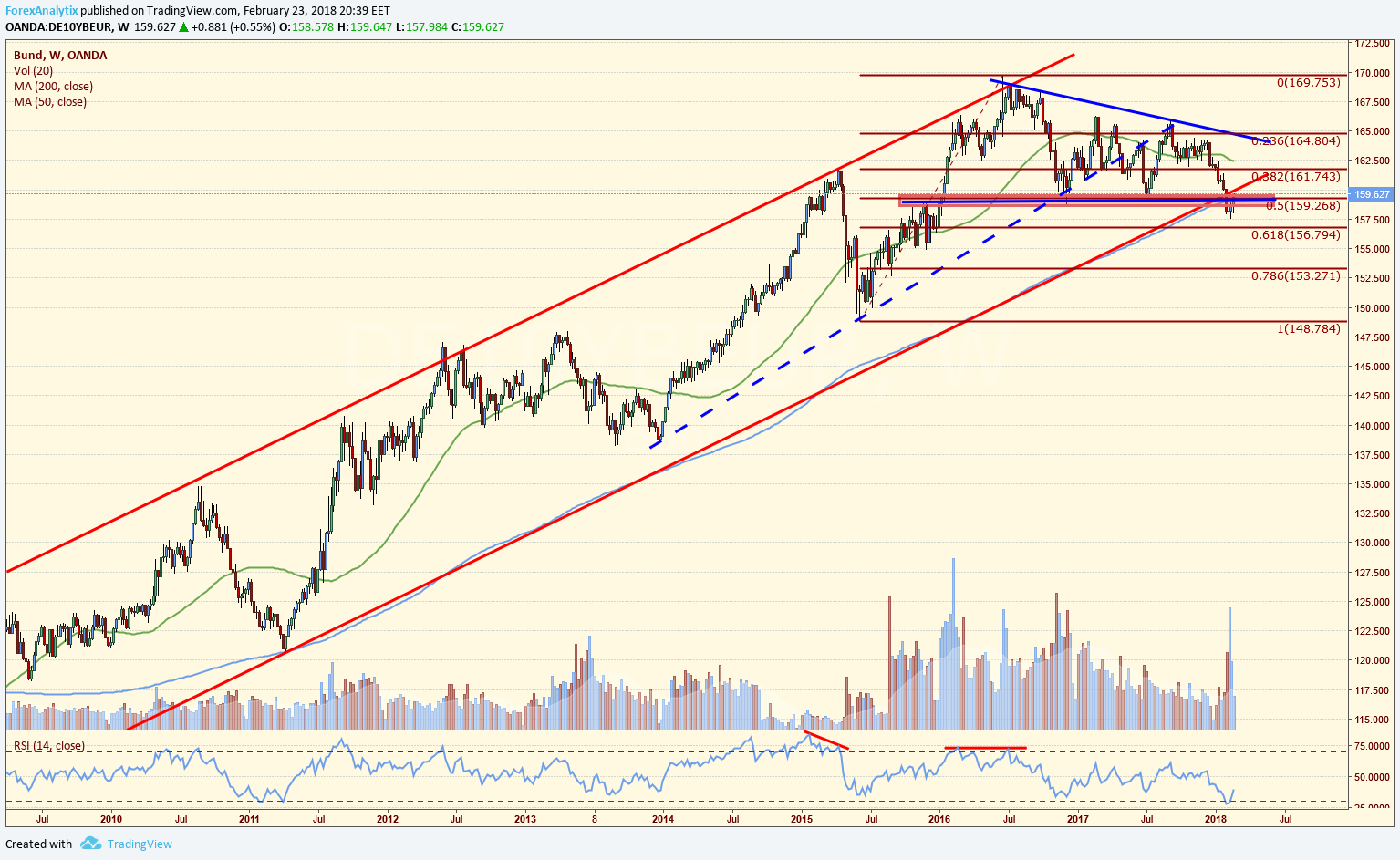 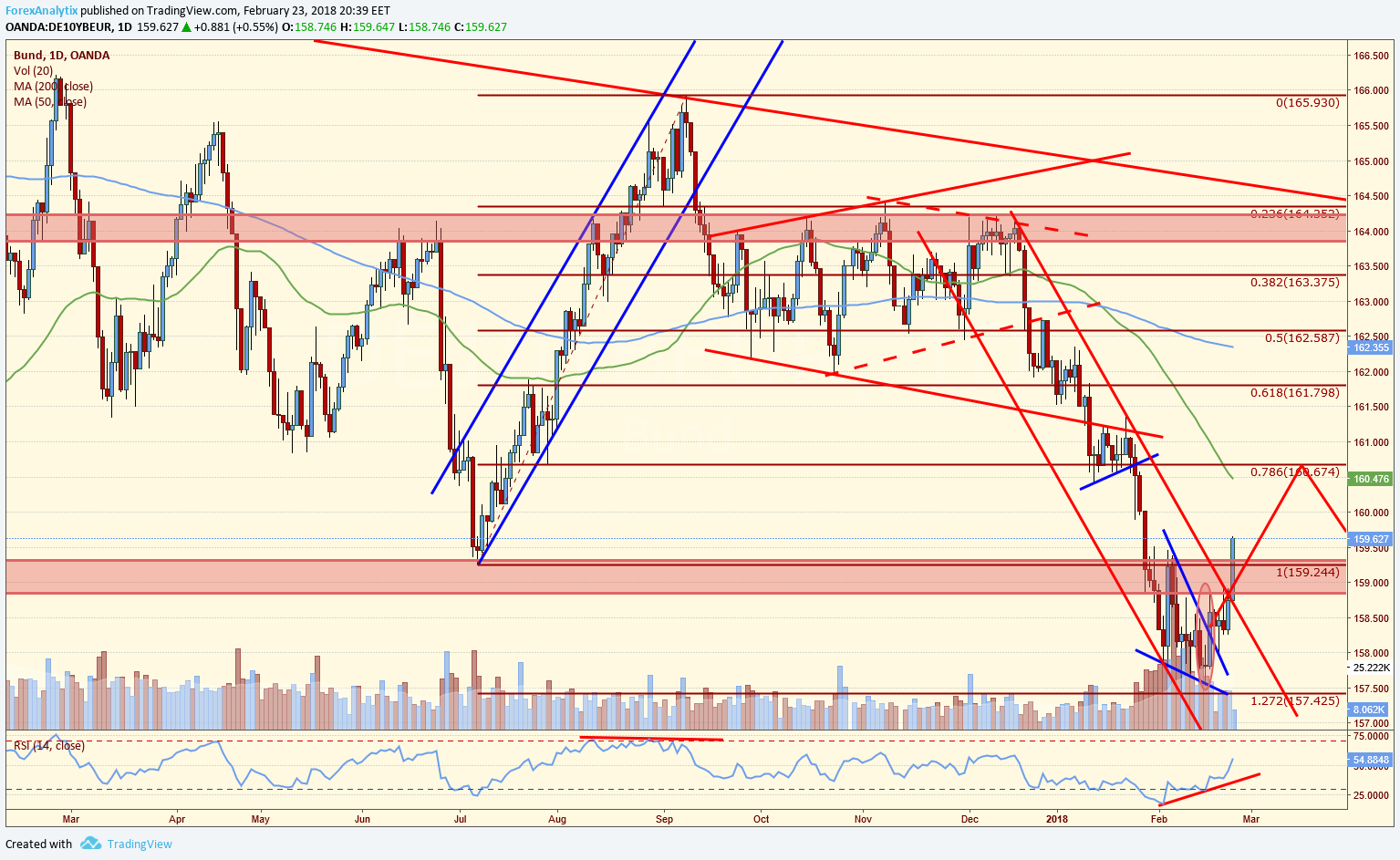 The S&P may have peaked near term, but what does it say about the US D...

Do the Italian Elections pose a risk to the EZ recovery and affected assets...
Scroll to top