After a 55% rally since the 2017 lows, crude is now vulnerable - ForexAnalytix - Blog
Click here to open Help

Is Crude’s move lower corrective and if yes when can we expect the uptrend to resume?

Crude has seen two major bear markets in the past decade. The first one occurred after the 2008 Global Financial Crisis (when most asset classes saw a big decline) and the second one was in H2 2014. In both cases crude fell over 70% within a period of 6 months, which made these moves very sharp and sudden.

Following the 2014 crash, shale producers (the main driver behind vastly increased production over the past decade) suddenly became unprofitable and were forced to cut production. This gave the traditional OPEC countries a breather as they managed to grab the reins of global oil production once again. OPEC and non-OPEC producers agreed in 2017 to control production and this seems to have been the catalyst for oil’s bull market rally, which brought us to $70+ prices in mid-2018.

We are now faced with a finely balanced market between the control of supply among traditional oil-producing countries and the re-emergence of shale producers. OPEC countries are perfectly happy to see oil consistently above $60 per barrel, and they are more than happy to relax supply constraints. However, this downward price pressure is broadly balanced by growing geopolitical instability and uncertainty.

The US Dollar has always been a major driver for oil price, as it’s always been a dollar-denominated asset. Any major USD moves will certainly have an impact on oil price, and this has been evident in late 2017 and 2018, as the greenback has fluctuated significantly.

So what’s in store for oil prices in the medium term? The macro picture is probably on the bullish side as the US Dollar will probably see another leg down on the back of the US administration trade decisions. Also, the US government keeps producing vast annual deficits, which cannot help but weaken the Dollar’s purchasing power. We have seen USD strength in Q2 2018 following nearly a year of weakness – this is something that we have anticipated and warned about in our past blog posts. WTI is now trading at around $65 and could well test the major support zone near $60. However, this should be a short-term correction before the next move higher which should take out previous highs and culminate somewhere around the $75-$80 range, or possibly beyond. 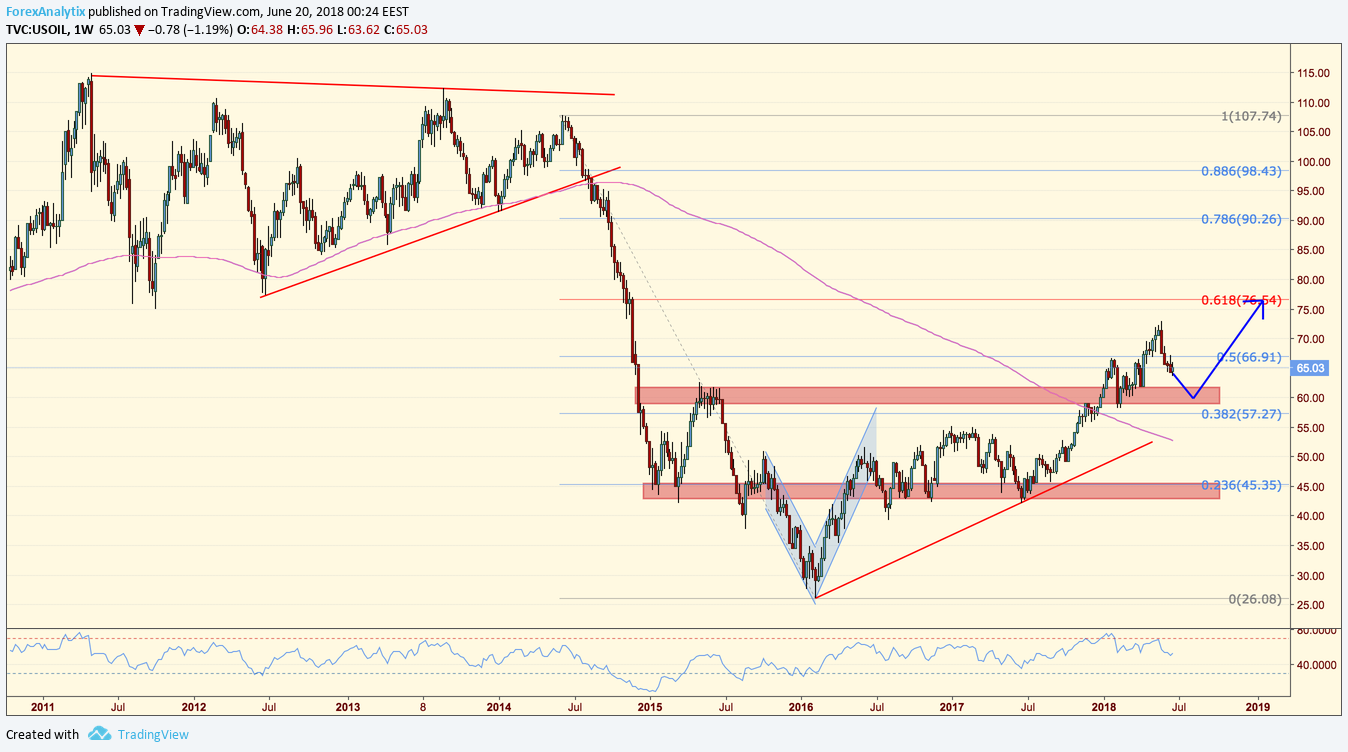 Crude Oil rejected the 127% extension from the Spring 2015 highs to Jan 2016 lows near $72. This also represented the channel top of the 2017/2018 up channel. Now, we are closing in on the channel support near $63.50 level, which the 61.8% Fibonacci support also held price this week. Which now means a closing weekly level of below $63 would mean a move back to the $55 level breakout point. But, from a risk/reward perspective, traders who think that Crude Oil prices continue to move higher may be looking for a near term long with stops below the channel support. 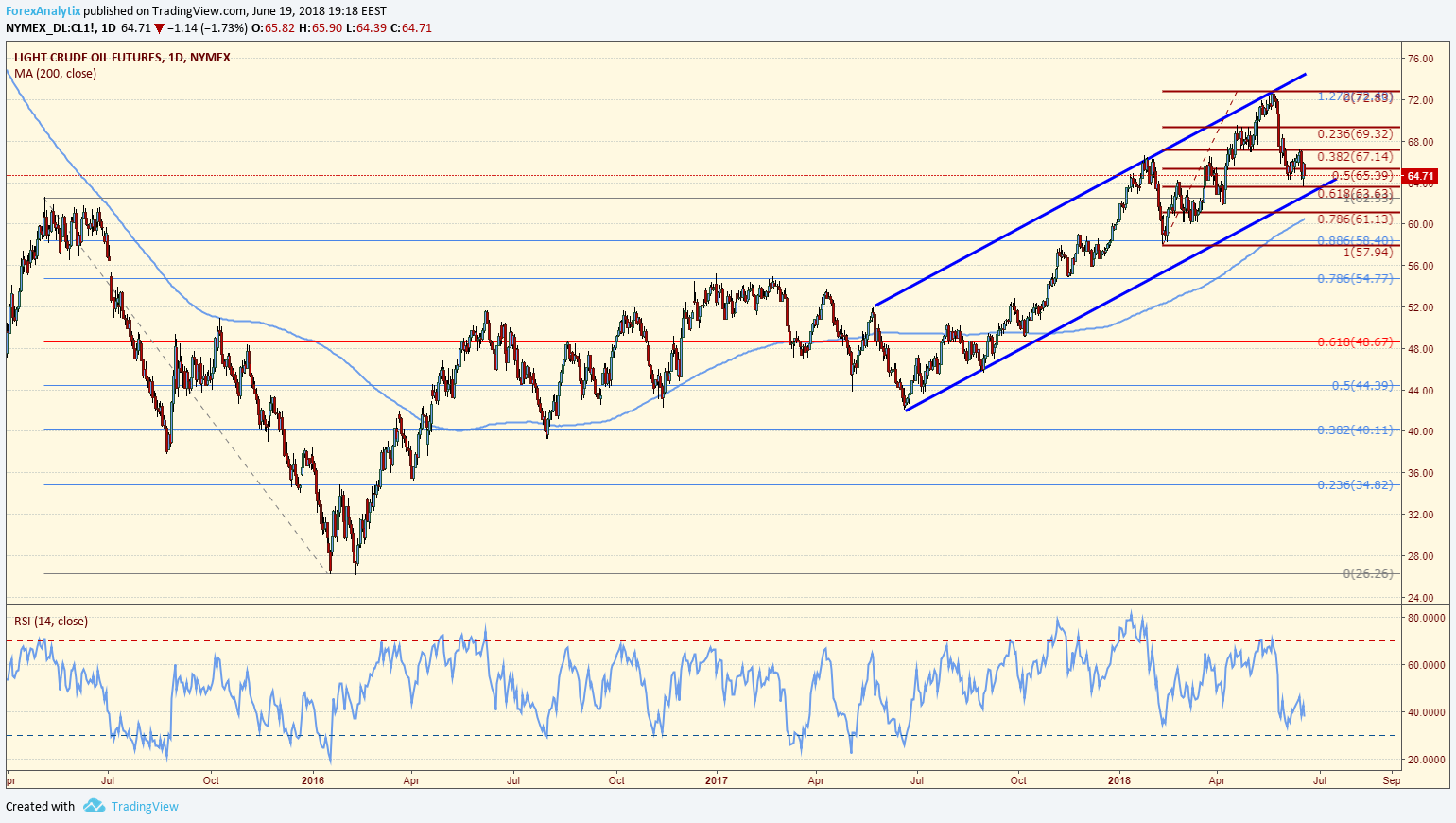 Crude Oil turned down sharply in the last few weeks about we have been warning a lot since market touched $70, as we recognized a pattern that indicated an upcoming reversal back then. We were looking at a five-wave recovery up from 2017 June lows, so we assumed that sooner or later bears will show up. In fact, that bearish turn became even more significant after a wedge pattern in a fifth wave, which is known as an Elliott Wave ending diagonal that normally causes a very strong turn in price. Normally a completion of an ending diagonal will take price back to the starting point of that path, which was at $60 per barrel, so there is more downside that can be coming this summer.

As Crude oil turns lower and dollar index turning up it may be a good idea to keep an eye on bullish developments on Lonnie as pair forms a major break out of a downward corrective channel that normally confirms a completion of an A-B-C pullback. However, I want to be more cautious when predicting the big price moves, so rather than calling for 1.4706, I want to look at minimum objective with a step-by-step process as price structure develops. So with that mind, my upward objective for now would be 1.3800, 2017 swing high.

Bearish divergence between the most recent tops forced the price to break the recent ascending structure trend-line acting as support, it’s now a resistance and it was rejected multiple times between June 6 and June 11.

At $61.037 we have the 38% fib retracement from previous structure support from Jun19 2017. This level can also act as neck for one eventual head and shoulders, but it’s to soon to identify and validate the behavior and first we need a reinforcement of the  neck and the formation of the right shoulder.

Below $59’s we have the Golden ratio at $53.686, synced with previous major structure resistance printed between Jan and Feb 2017 it should act as support, and below at 161.8% fib extension one eventual bullish shark pattern at $48.937.

MACD still suggesting more downside potential for crude, but RSI is now printing new lows below most recent ones and the price is rejecting that idea which represents bullish hidden divergence and it may force the price to bounce or at least to print some relief and retest previous structure above from here. 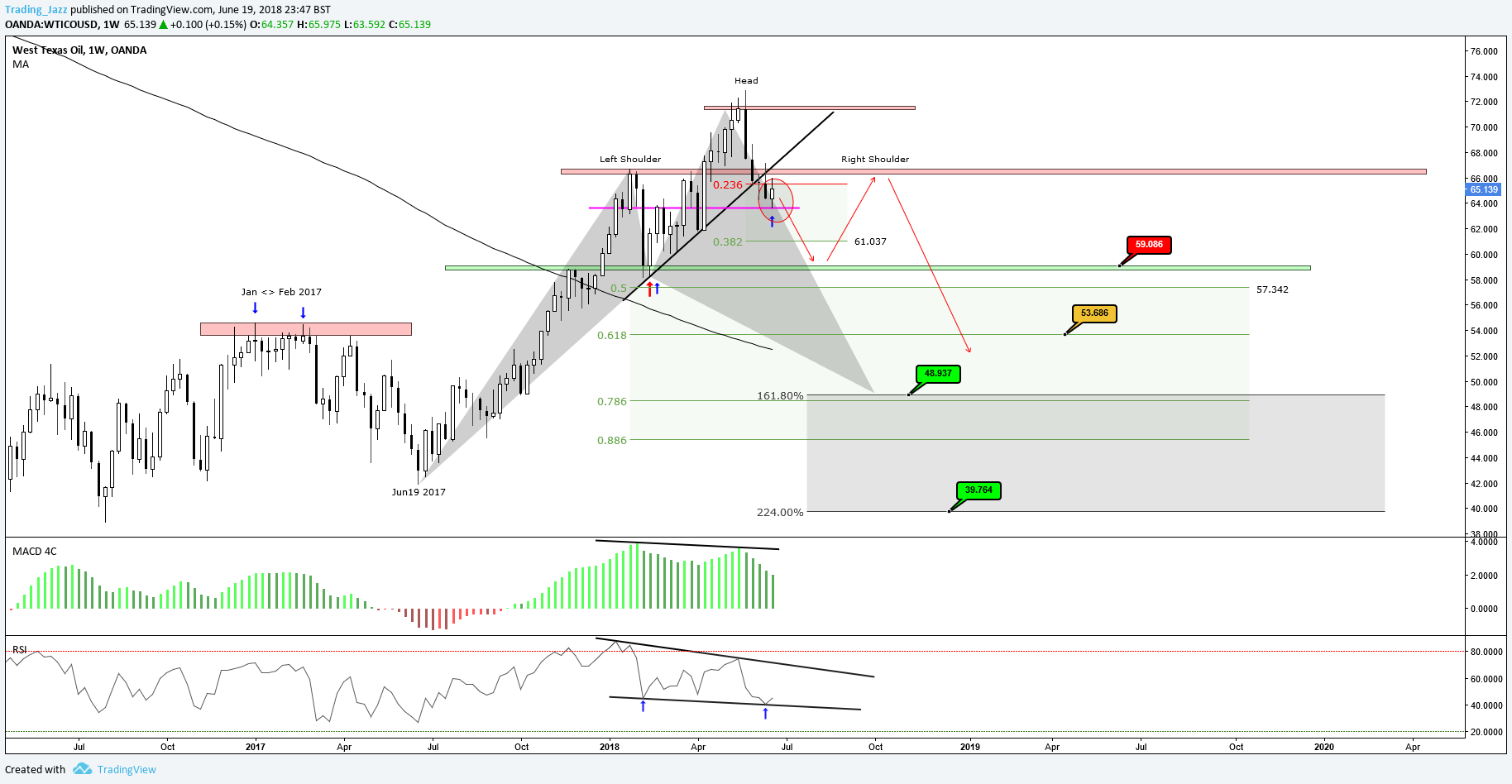 The bearish crab printed at $72.084 produced a massive 11.78% fall fore crude and which is now trading at bullish cypher pattern territory at $64.183 supported by one eventual double bottom in formation which requires a broken neck above 67.147 to validate. 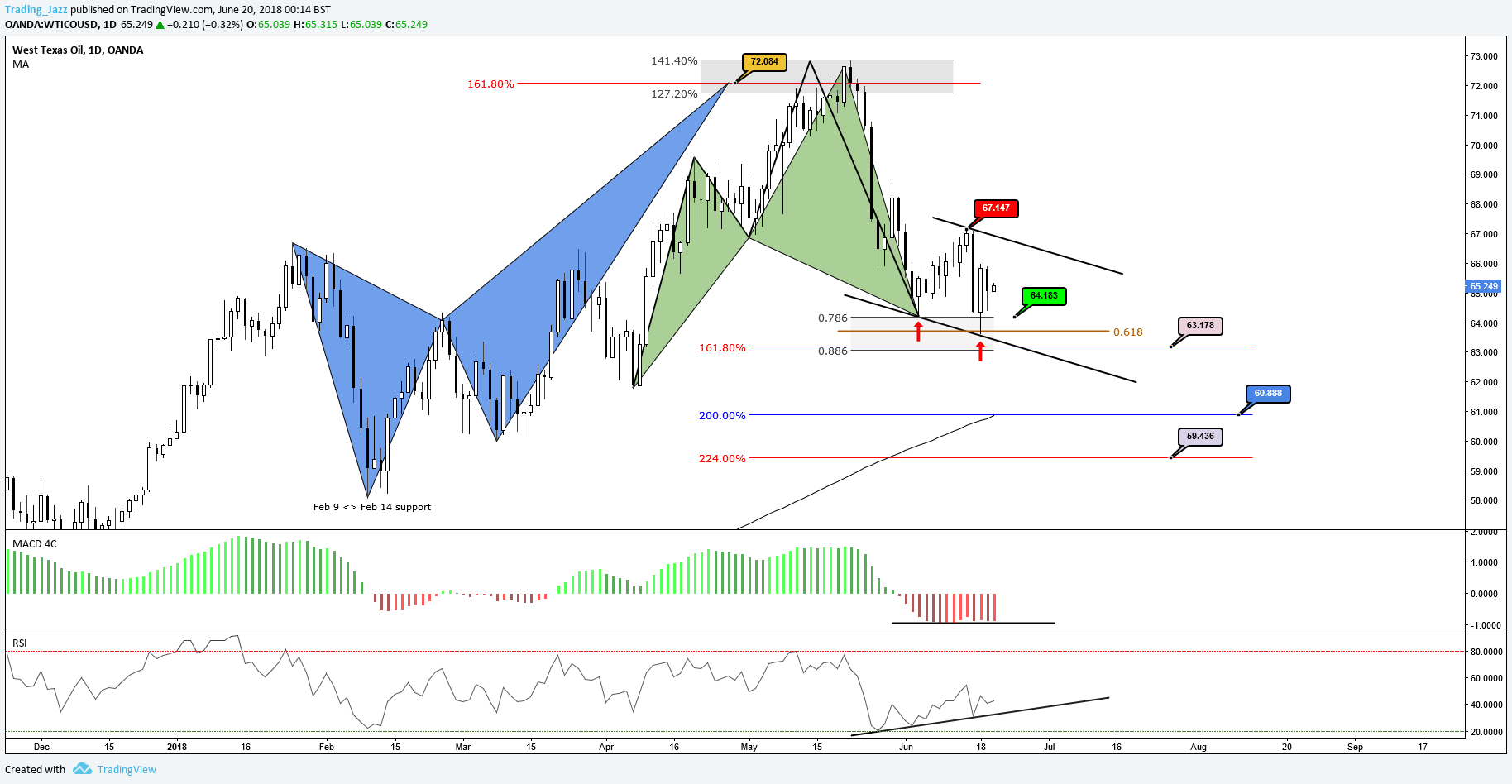 The US Dollar squeeze higher may be over, now what?

UK Politics in Turmoil, What Next?
Scroll to top