UK Politics in Turmoil, What Next? - ForexAnalytix - Blog
Click here to open Help

UK Politics in Turmoil, What Next?

You are here: Home / UK Politics in Turmoil, What Next?

It’s been a very lively and busy few days in the UK. There are many scenarios and opinions flying about at the moment, but what do we make of the current situation? Let’s take a step back and look at the facts.

The UK narrowly voted to leave the European Union in 2016, by a vote of roughly 52% to 48%. Given that mandate, the UK government (and the whole nation) has since been divided into the “hard Brexit” and “soft Brexit” camps, with the two sides each trying to get control. It’s generally accepted that between the two scenarios, “hard Brexit” is bearish for Sterling while “soft Brexit” is bullish.

On late Friday, PM May secured an agreement within her cabinet for the direction of Brexit negotiations moving forward. May has always been on the “soft Brexit” side, having actually initially supported the “Remain” movement. The agreement includes among others:
• A “Mobility framework” to be set up which will allow UK and EU citizens to travel, study & work in both areas.
• A “Common rulebook for all goods” within the EU, including agricultural products. The UK will apply domestic tariffs & policies for goods intended for the UK, but charge EU tariffs for goods that end up heading into the EU.
• “Co-operative agreements” to be established between UK & EU competition regulators.
• A “Joint institutional framework” when it comes to courts of justice (done in the UK by UK courts, and in EU by EU courts).

We must note that this agreement is just the UK’s preferred way moving forward. It still needs to be reviewed and agreed by the EU, and it’s merely the first small step towards reaching an agreement between the UK and EU. If the EU reject this proposed agreement then we will be back to square one, but until then we should treat this as a positive development.

David Davis, the head of Brexit negotiations, was always considered to be more on the “hard Brexit” side (as was his deputy Steve Baker). As a result of this cabinet agreement – and the other side effectively taking control of the process – Davis resigned along with his deputy. This move has been characterised as a “hammer blow” for May, and generally a very negative event, but it was practically unavoidable following the cabinet vote – so we don’t think it should be a big surprise. Davis is replaced by Dominic Raab, a pro-Brexit supporter and former housing minister. He seems to have good support from May and the cabinet, and we now need to wait and see what his approach is.

As if the above developments weren’t enough, we saw yet another important move on Monday as Foreign Secretary Boris Johnson also resigned. Johnson had also been a vocal advocate for a “hard Brexit”, constantly claiming that the UK would need to have a clean break from the EU as dictated by the British people via the referendum. Again, this shouldn’t have been a big shock, and neither should we think that it will be the last resignation within May’s government. As the two camps remain divided and the “soft Brexit” route seems to have been chosen going forward, the “hard Brexit” supporters will likely feel increasingly uneasy with their position.

The big risk will undoubtedly be that May’s slender majority gets eroded and a new round of elections is forced. In such a scenario, what would the most possible election outcome be? Jeremy Corbyn’s Labour party has been slowly gaining ground, but the Conservatives would probably be victorious once again – let’s not forget that for the past 2 years the British people have had an opportunity to further assess the potential “hard Brexit” impact, and it’s quite possible that there has been a realisation that it could be particularly damaging for the UK.

The chances of a Conservative election victory would probably increase substantially if PM May stepped down and a new PM was appointed in her place. In fact such a move would probably be the best way to restore confidence in the Conservative party after May’s undoubtedly poor handling of the Brexit process so far. Her approval ratings are at all-time lows and she may be forced to make such a move in the very near future. If such a move is made, then the selection of a new leader would be absolutely crucial for them.

Now, where does all this leave us? Let’s think about the two potential scenarios that were always going to be in play: the “soft Brexit” and the “hard Brexit”. What we have seen unfold in the past few days is the beginning of the “soft Brexit” scenario. So, I find it very difficult to turn bearish GBP on the back of what has just transpired, even with the increased political uncertainty.

I remain bullish as the main source of GBP weakness since 2016 has been Brexit uncertainty, and specifically the “hard Brexit” scenario (the BoE has repeatedly stated this in the past year). What we are now seeing is the first step aiming at removing this uncertainty, and this in my opinion can only be a positive for the Pound.

The GBPUSD has retraced nearly 50% of the post BREXIT lows to the highs this spring. The recent double top completed when we traded towards the 1.3050 level and has since bounced higher out of a descending wedge. This is constructive near term as long as we are above the 1.3050 level, but please note we just stopped on the 9th of July at the 24% retracement at 1.3360. 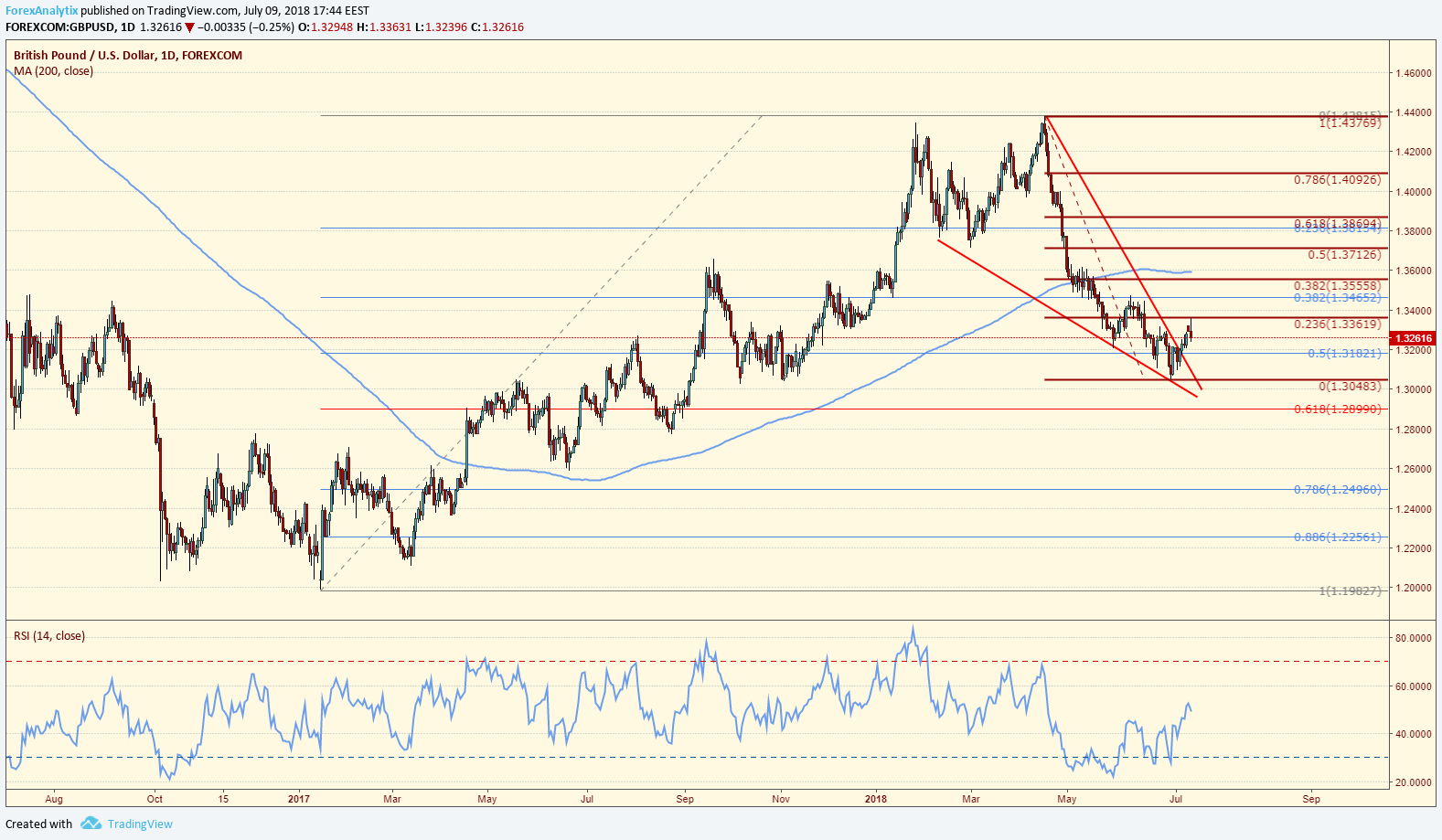 Elliott Waves has a clear outlook on Gold
Scroll to top