You are here: Home / Crude Oil examined under the scope of M.A.A. (Multiple Analysis Approa...

Oil has had a rollercoaster ride since late 2014, dropping from over $100 per barrel to under $30. The cause was quite simple:

the double whammy of

Following the 2014-2015 oil price plunge exploration spending was greatly reduced, leading to a big reduction in new projects (interestingly, big cost projects were slashed but small-cost projects proved more flexible). Shale producers are resilient in cutting costs and improving productivity. However, their average extraction cost is still much higher than traditional oil producers and hence cannot withstand prolonged low oil prices. US Rig counts have grown steadily from the 2016 lows but they are still over 70% off from the 2014 peak.

The oil price collapse led to a huge cut in oil-related investments but production was much slower to respond. This meant that oil supply remained at an excess for a prolonged period. Supply is currently more than adequate and experts expect markets to balance sometime in 2017. Global demand has dropped significantly from the highs but lower prices have given some support. Demand remains challenged and the fact the Chinese economy is starting to stutter is not helping (China accounts for roughly 15% of global oil demand).

So what’s next for oil? It’s a finite, non-regenerating resource and humanity simply cannot depend on it forever because it will eventually run out. The transition from fossil fuels to alternative energy sources has started slowly over the past decades but it’s still a considerably way off. Furthermore, the first step for developing countries that come out of poverty will always involve oil. Alternative technologies are being developed and improved but they will always be the higher-cost option. In the long run oil will be totally replaced as an energy source – but this transition will likely take much longer to achieve.

That’s the long-term picture, but I’m sure that most traders don’t have a 100-year trade horizon. What about the next year or the next decade? For one, the world’s largest producer (Saudi Arabia) has outlined its “Vision 2030” program and their ultimate goal is to diversify out of oil. Over the past decades they have successfully allowed oil price to rise (increasing their profits), but also to fall when they need to maintain their market share. They’ve played this game exceptionally well. Sub-$50 oil generates a big deficit for them (~20% of GDP in 2015). Their foreign reserves currently stand at 100% of GDP and if low oil prices persist, KSA will need to increase their debt. It’s worth noting that they recently tapped the bond market for the first time in a $17.5bn sovereign offering, as part of their reform plan.

OPEC countries ultimately need higher oil prices so they have no real option but to make some kind of production freeze/cut agreement. They recently agreed to cut production but the agreement still needs to be finalised. Fundamentals indicate that oil price should remain under pressure for the immediate future but some big binary events remain – events that could have a big influence on prices:

The conclusion is far from clear. Oil’s natural characteristics mean that it will eventually cease to be one of humanity’s main energy sources and hence its intrinsic value will collapse. However, in the near future it will continue to trade as all commodities do – based on supply and demand. Oil producers need to get as much value as they can out of their asset and they will certainly make sure of that. For this reason, intervention is a near certainty.

In the current environment oil price seems relatively balanced but it will remain at risk of event-driven peaks and troughs that will continue to shake weak hands and speculators.

Technically, crude has been attempting to put in a longer term inverted head and shoulder’s pattern (pattern indicated on the weekly chart). This is a bullish reversal pattern with the slightly upwards inclined neckline passing currently from around $52. The unfortunate thing for bulls was that most traders/investors were well aware of the setup and were actively monitoring it since June. Usually, when this happens, the risk of a pattern failure is quite high which poses a risk for traders in the near term (weak hands have to be wipped out 1st before the market can complete the formation) and the WTI market proved this paradigm to be once again valid. A double top on the neckline resistance (19th of October) turned WTI decisively lower and after failing to hold horizontal support of $49 it accelerated lower.

Looking at the daily chart and trying to find possible support levels we immidiately notice the confluence of ascending trend line support (colored blue on the Daily Chart) that currently passes around $46 and coincides with the 61.8% Fibonacci retracement of the latest leg higher. If this level is breached, the bullish case will be technically weakened but the horizontal support zone that has $42.5 as its midpoint is the line in the sand (or our Bull/Bear line as we like to call it in ForexAnalytix). 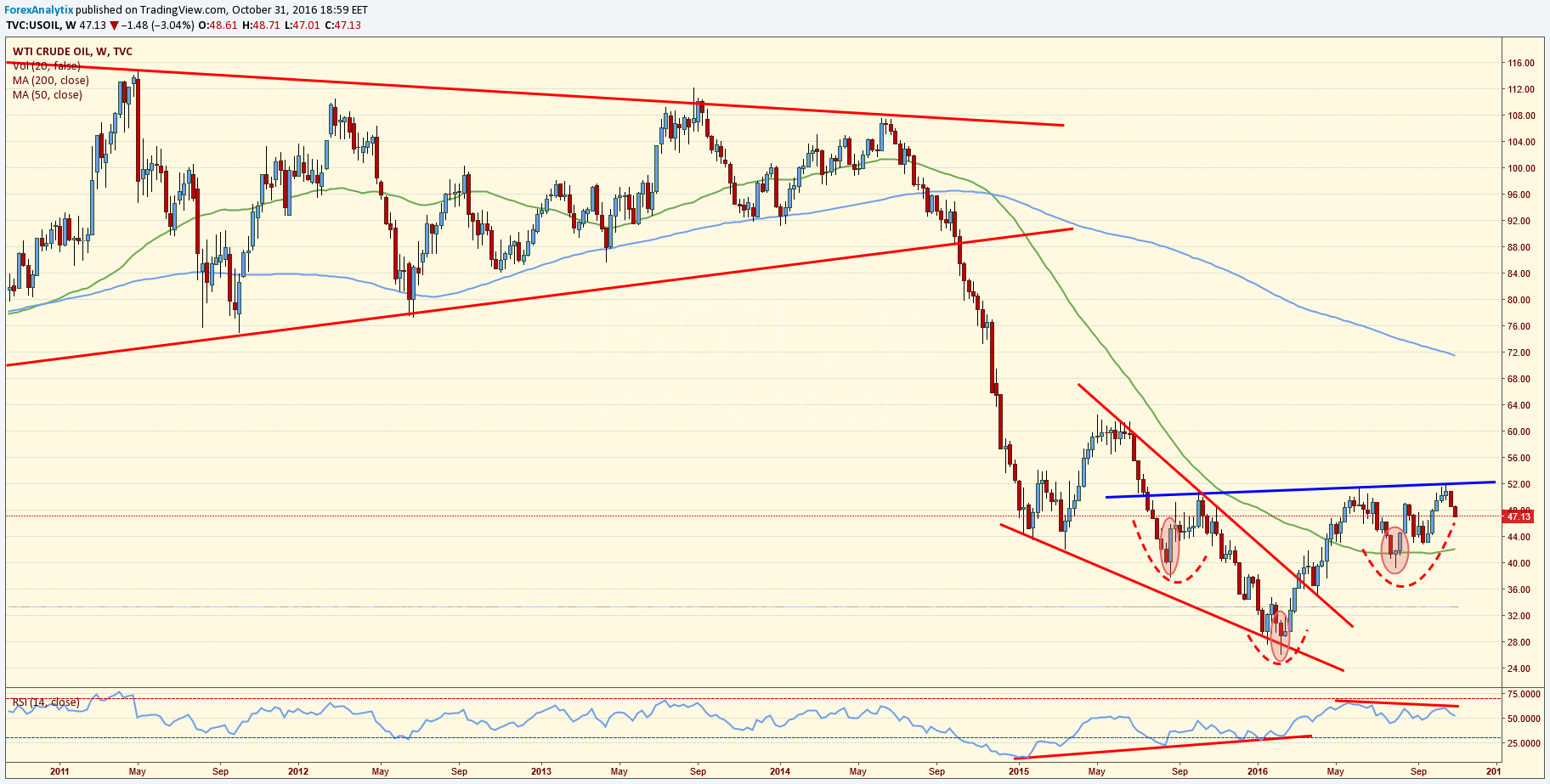 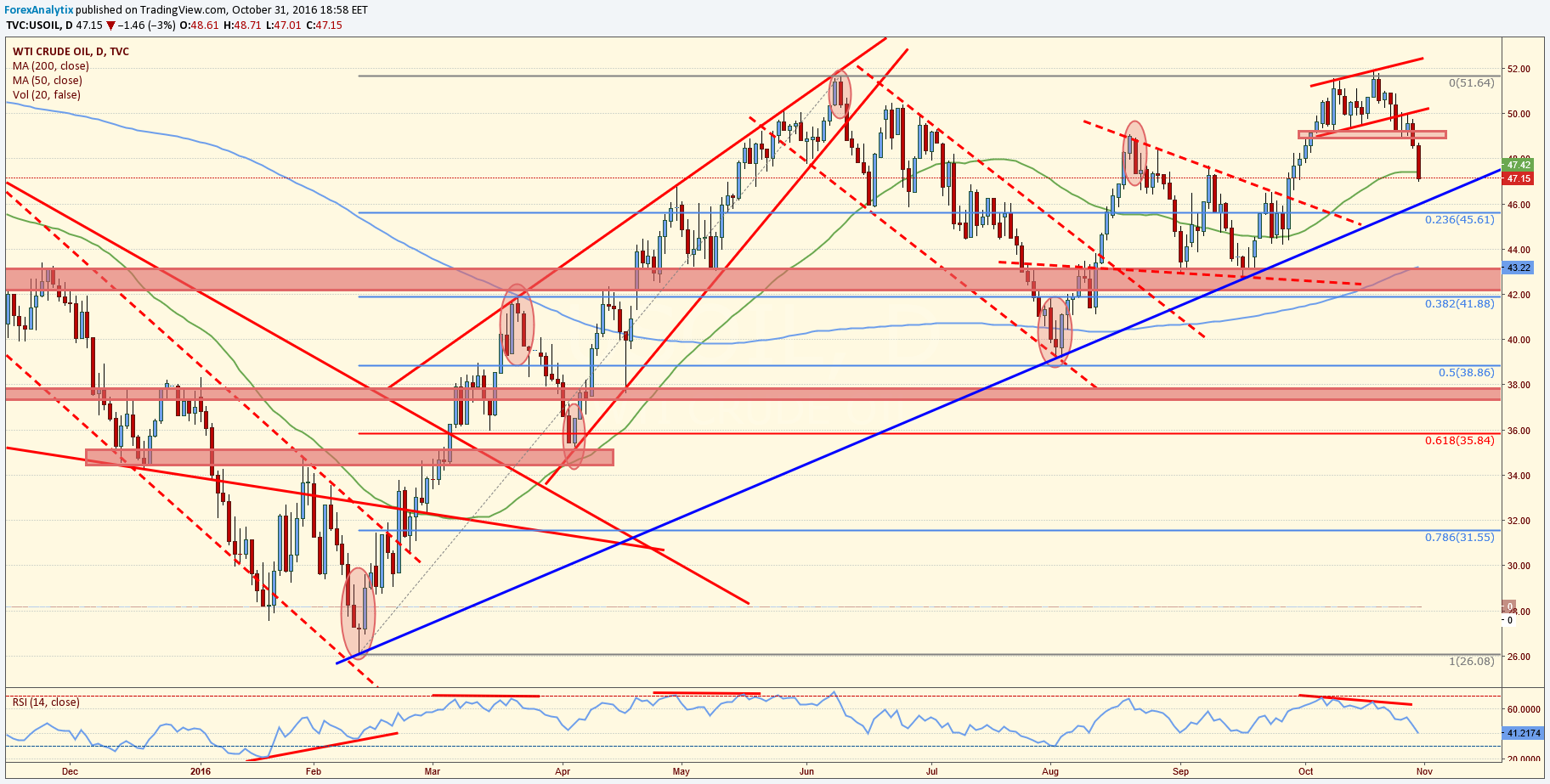 The Gartley pattern in the December contract chart of WTI oil from the June high is a bearish trend continuation pattern which means that the ABCD rally from the early August low is a correction and we should expect another leg lower that has a relationship to the first leg so we expect it to terminate at $44.70 or a new low at $40.00.

The continuous chart of WTI oil shows a double top at 51.60 and a clear ABCD corrective rally from the August low so we still expect a decline relative to the decline from the June high which should terminate at $44.20 or $39.43 which is very close to the levels projected in the December contract chart.  The 200 daily moving average is around $44.00.

The move higher that started in February and caught most investors off guard proved to be impulsive in nature (the 5 waves up is a testimony to that). Therefore we expect that the move lower which started in June (and not a few days ago as most believe) to prove corrective in nature. The drop from June to August in our interpretation is corrective wave A, the recovery to the double top is  wave B and we have currently started the final corrective wave (C). It is still too early to determing what kind of form wave C will take (several possibilities according to E.W. theory) but quite often C=A which means that we are expecting that $39 low might be retested before resuming the uptrend. 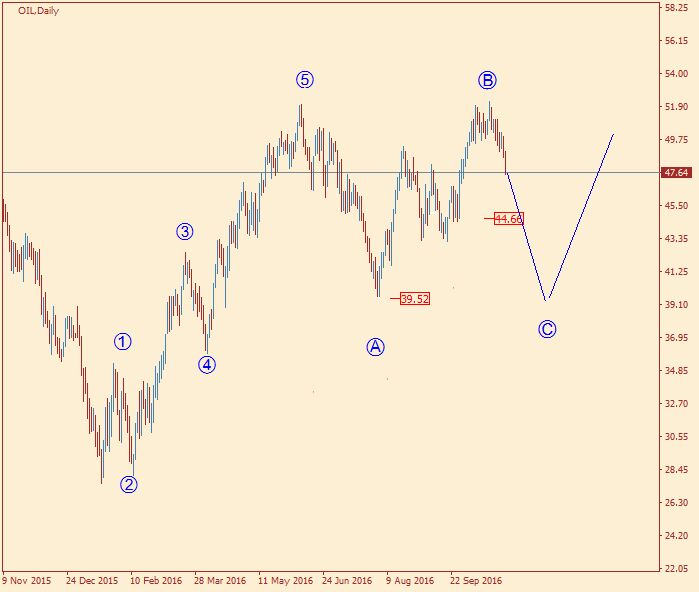 The Forex Market and the U.S. Presidential Elections
Scroll to top