EURUSD, where to from here? - ForexAnalytix - Blog
Click here to open Help

EURUSD, where to from here?

You are here: Home / EURUSD, where to from here?

The EUR/USD has been quite erratic since early 2015. The Greek crisis caused the pair to drop from 1.40 to nearly parity, all in the space of 10 months, and that was a brutal move lower which destroyed longs. Since then, the pair has range traded between 1.04 and 1.24, spending some time near both these extremes. 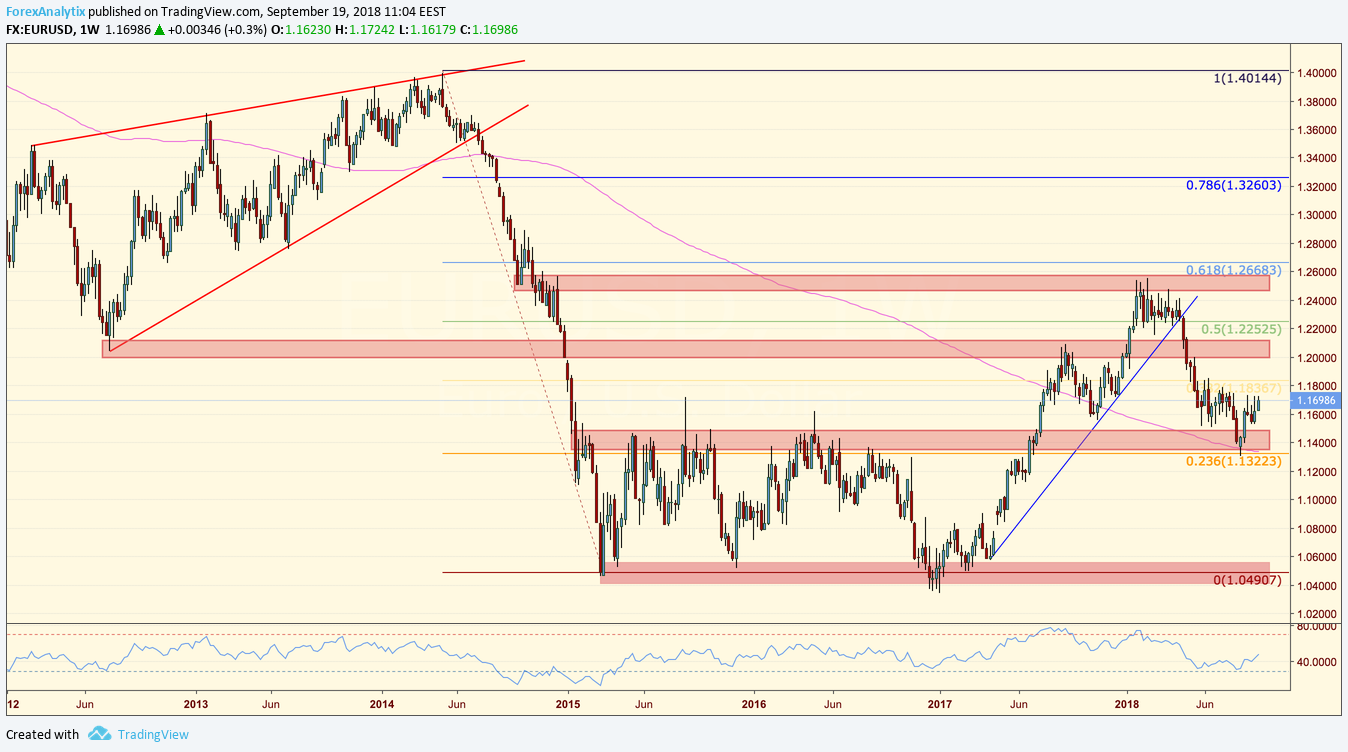 Let’s try to ascertain what the main drivers are for this pair, and how things could evolve going forward.

The Euro has managed to successfully negotiate (thus far) a number of potential dangers such as the Greek debt problem, the new unpredictable Italian government, and the situation in Catalonia. The Eurozone economy has been showing signs of promise, with inflation finally hitting the 2% target and growth remaining decent. Unemployment is falling, although the periphery’s elevated levels keep it higher than many other western economies. All these factors have enabled the ECB to start talking about tightening and feeling confident about the prospect of a continued recovery. QE is planned to stop at the end of 2018 and tightening is projected to start after the summer of 2019, although that is obviously subject to change.

On the US side, the Fed continued on its hiking path with more hikes priced into the remainder of 2018 and 2019. The Fed’s favourite inflation metric – Core PCE – has also hit the magic 2% mark, but the effect of the past rate hikes should now start to become visible. Unemployment is near all-time lows, but so is the labour participation rate, and it’s worth noting that the quality of employment in the US has been deteriorating. Finally, GDP growth remains robust and is expected to remain relatively strong going forward.

So, what are the potential risks for this pair? For the Euro, things seem to be recovering well but the main danger remains the possibility of a ‘black swan’ event such as the ones mentioned above. The fundamental problem of the Eurozone remains, which is the north/south divide in terms of economy strength, unemployment and productivity. For the Dollar, the main concern in the short term is the Trump administration’s aggressive trade policy. They are starting fights with some very powerful opponents such as China, and such moves can damage future US potential. The NAFTA talks are progressing but that’s also not a given, in terms of achieving a positive result. Finally, we are now starting to see some of the effects of the past two years’ rate hikes, as the US economy starts producing some hit-and-miss economic releases.

From a fundamental perspective it’s actually quite difficult to have a firm view on EURUSD. There are risks on both sides and although the most likely short-term direction is higher, there are far too many unknowns that could push it aggressively towards either direction.

The EUR/USD is finally breaking above the descending T/L resistance which is also the neckline of an inverted H&S formation. The next upside target is the 1.1840 horizontal resistance area but I have my eyes set to the confluence of resistances at 1.1930 get tested (50% Fib from the 1.2556 high to the 1.13 low and 200DMA). It is interesting to note that the inverted H&S target confluences almost perfectly with the 61.8% Fib at 1.2077 and a well established horizontal resistance area. Do I think that the pair will make it up there? It is not my main case scenario but I would definitely not exclude the possibility given the fact that the ECB has “space” to surprise to the hawkish side which is quite the opposite of what I think that the FED can do. 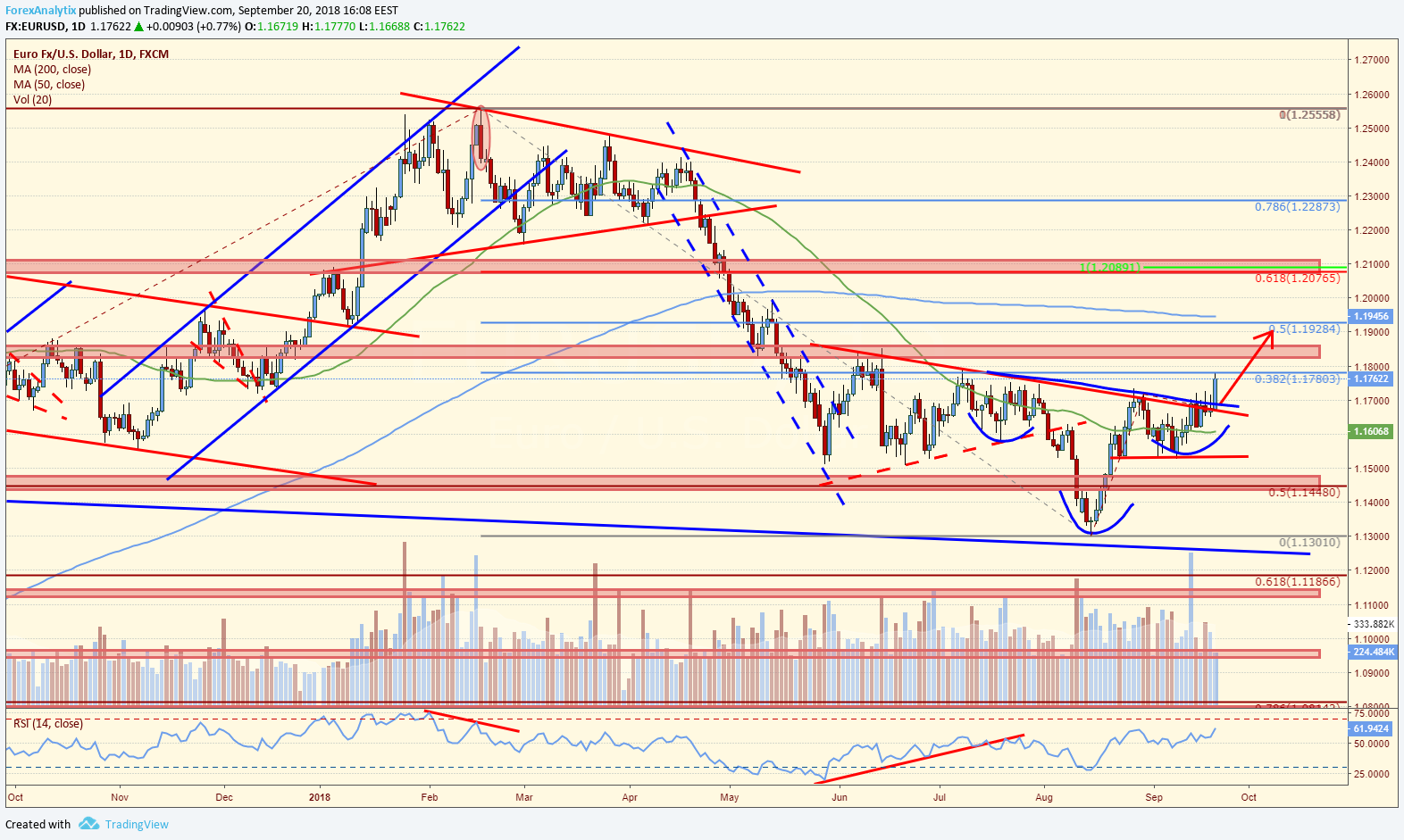 EURUSD came down very sharply and impulsively from February highs which I believe it’s a top in place for this year. The reasons is a five wave drop out of an upward channel that is definitely the most important evidence of a bearish reversal. We know that when market makes such an aggressive turn in five waves, then this leg belongs to a bigger bearish structure, so I am looking and expecting more downside after a corrective rally which is already underway. I labeled this as two options; wave 2 or wave B since I do not want to predict price moves too far into the future. But I know that market should be headed lower anyhow after rally is completed, ideally from around 1.190-1.20 resistance area.

I love this resistance also because of a bearish H&S pattern that I am tracking.  In H&S pattern some times shoulders can be very similar in length, so I see room for more upside within current right shoulder that can be underway to the  upper parallel neckline.

Generally speaking; EURUSD is headed higher short-term I believe, but prices can be much lower by the end of the year , or early in 2019. 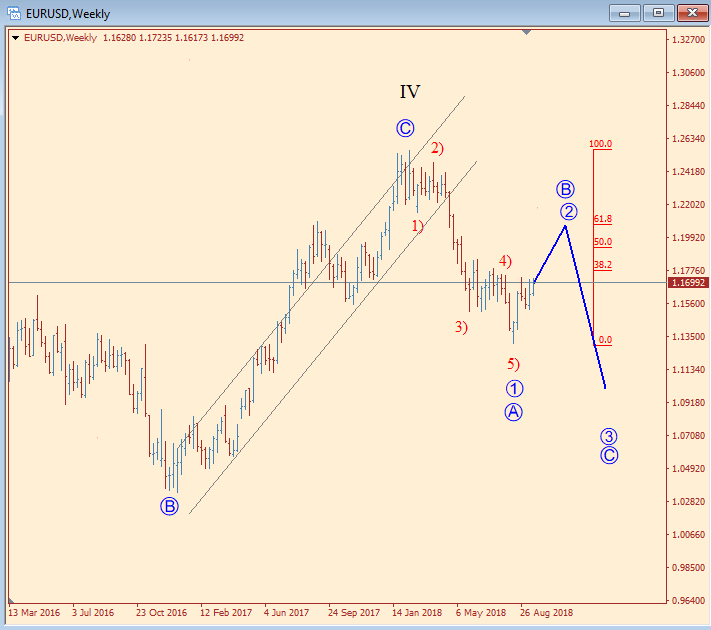 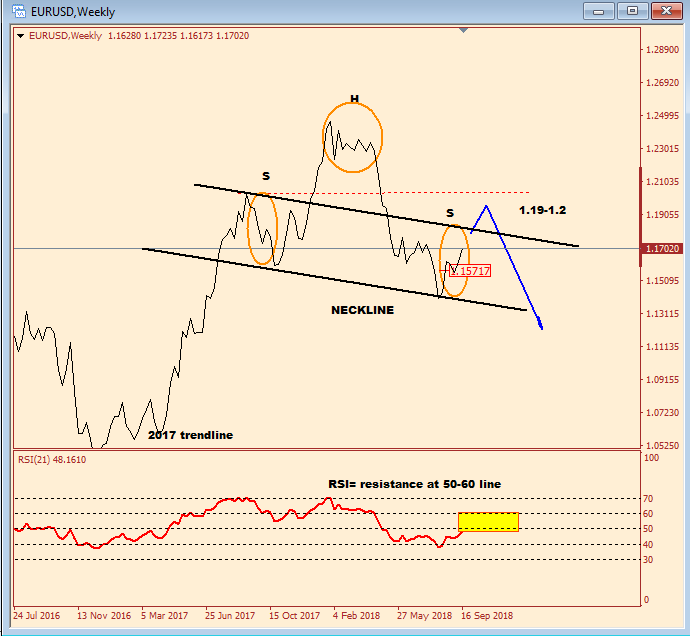 Are precious metals due for a relief rally?