Are precious metals due for a relief rally? - ForexAnalytix - Blog
Click here to open Help

Are precious metals due for a relief rally?

You are here: Home / Are precious metals due for a relief rally?

Precious metals have exhibited broad weakness in the past six months, seemingly contrary to what market conditions might suggest. In the midst of trade wars and Emerging Markets worries, they should – in theory at least – have performed better. But can we identify any fundamental reasons for that? Let’s take a step back and analyse gold’s price action from the global financial crisis onwards.

From around $600 in 2007, gold went on a parabolic rise to a peak of over $1900 in 2011, reflecting the worsening global economic conditions. Precious metals were one of the main “go-to” safe haven assets, and as such they outperformed most other asset classes. Interest rates were slashed and bond yields fell dramatically, while equities found some support after the initial drop in 2008. However, that parabolic rise was never going to be sustainable, and so a big drop started in mid-2011 for both metals. Silver in particular has now lost over 70% of its value from the peak, in a spectacular sustained drop.

What are the potential reasons for the precious metals moves? 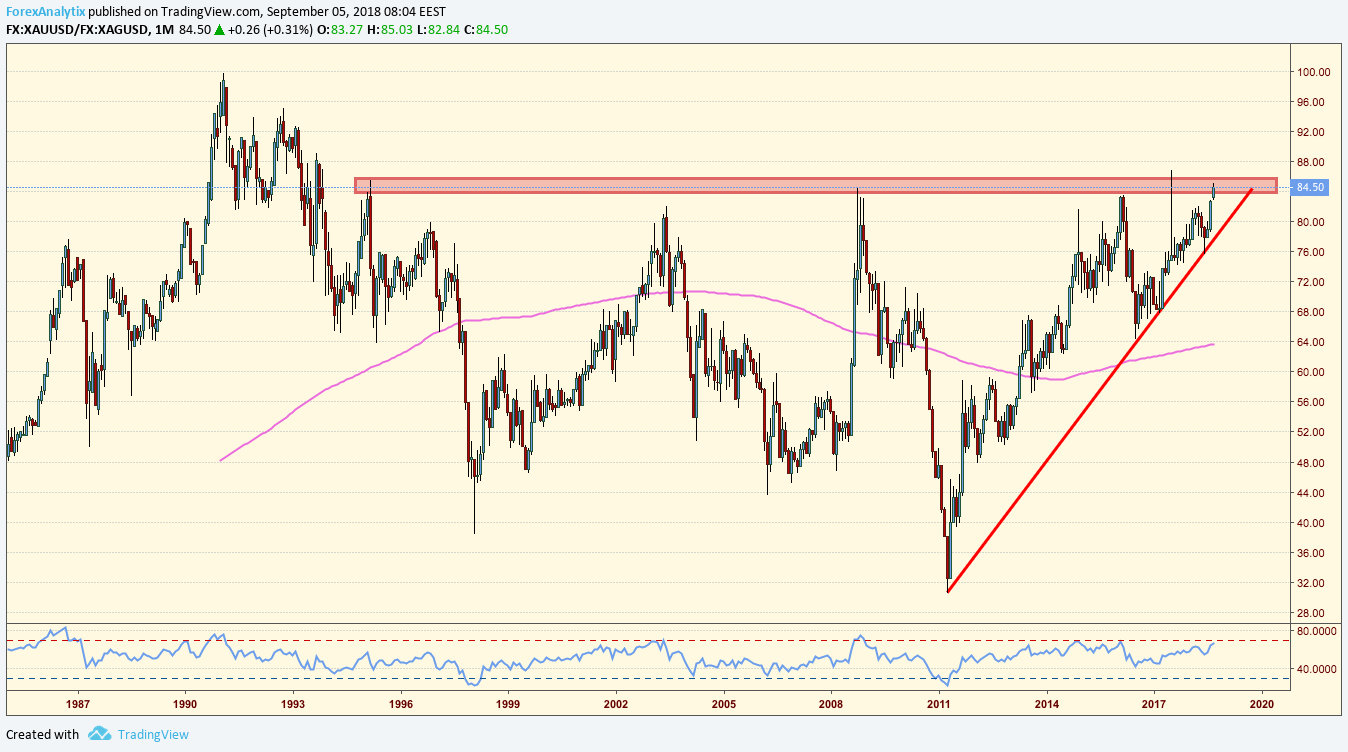 So, what’s the possible macro direction going forward? Well, even though PMs have been particularly weak in the past few years, the reasons for that move are not totally clear. Fundamentals suggest that they are now substantially undervalued and should be close to a major turn. The Gold / Silver ratio is also flashing the warning light, as it has reached lofty levels which most often signify the beginning of a broad bull market. Silver always outperforms gold on a rally and with the ratio near 85 we’re getting a strong indication that the rally may be coming soon.

Two weeks ago, Gold had a mini “capitulation” in Asian trade that took the precious metal below $1160 before reversing aggressively the following days. And currently we are trading well above that low as Silver continues to grind out a new cycle/trend low. In the event Silver bounces, the risk for a gold rally is high. We have a bull flag from the lows and the RSI is also developing a bull flag formation. At this time, a break above the $1200 level in the spot price could cause a short squeeze towards the $1240 level, being the breakdown point which was the lows from December 2017. 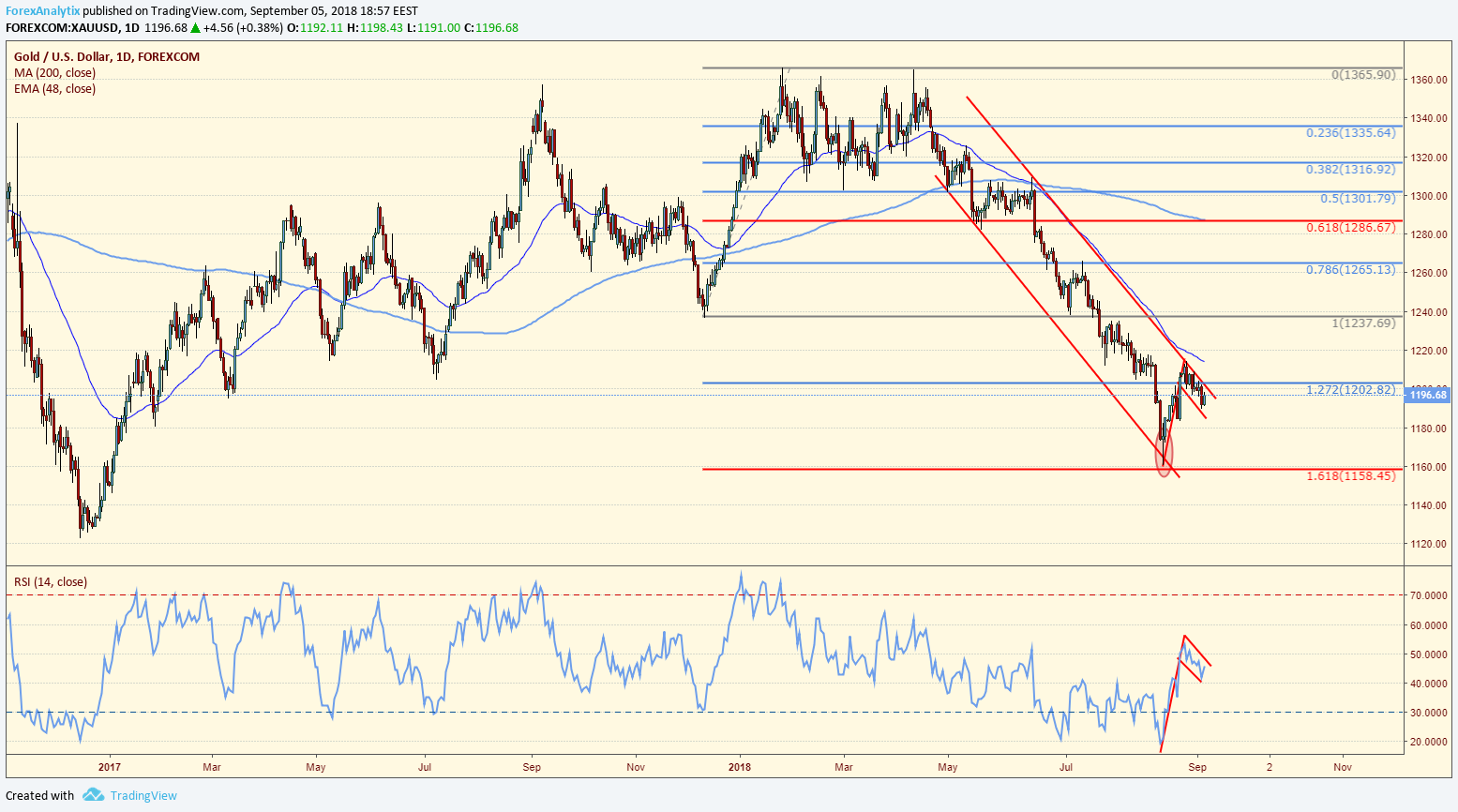 Silver is depreciating within a descending channel after breaking below the L/T symmetrical triangle in the end of June but we are finally starting to see the first signs of divergence. The RSI reached almost 20 at the previous low ($14.30) but is currently above 30 despite the metal trading lower while at the same time gold is failing to follow silver lower and to register a new low (cross market divergence). We are watching $13.91 (the flash crash low) and $13.63 (the 9 year low) for support while a break above $14.50 and the descending channel resistance will indicate that a corrective bounce is underway. A breach of the 1st target brings $15.20 and $15.70 in the scope. 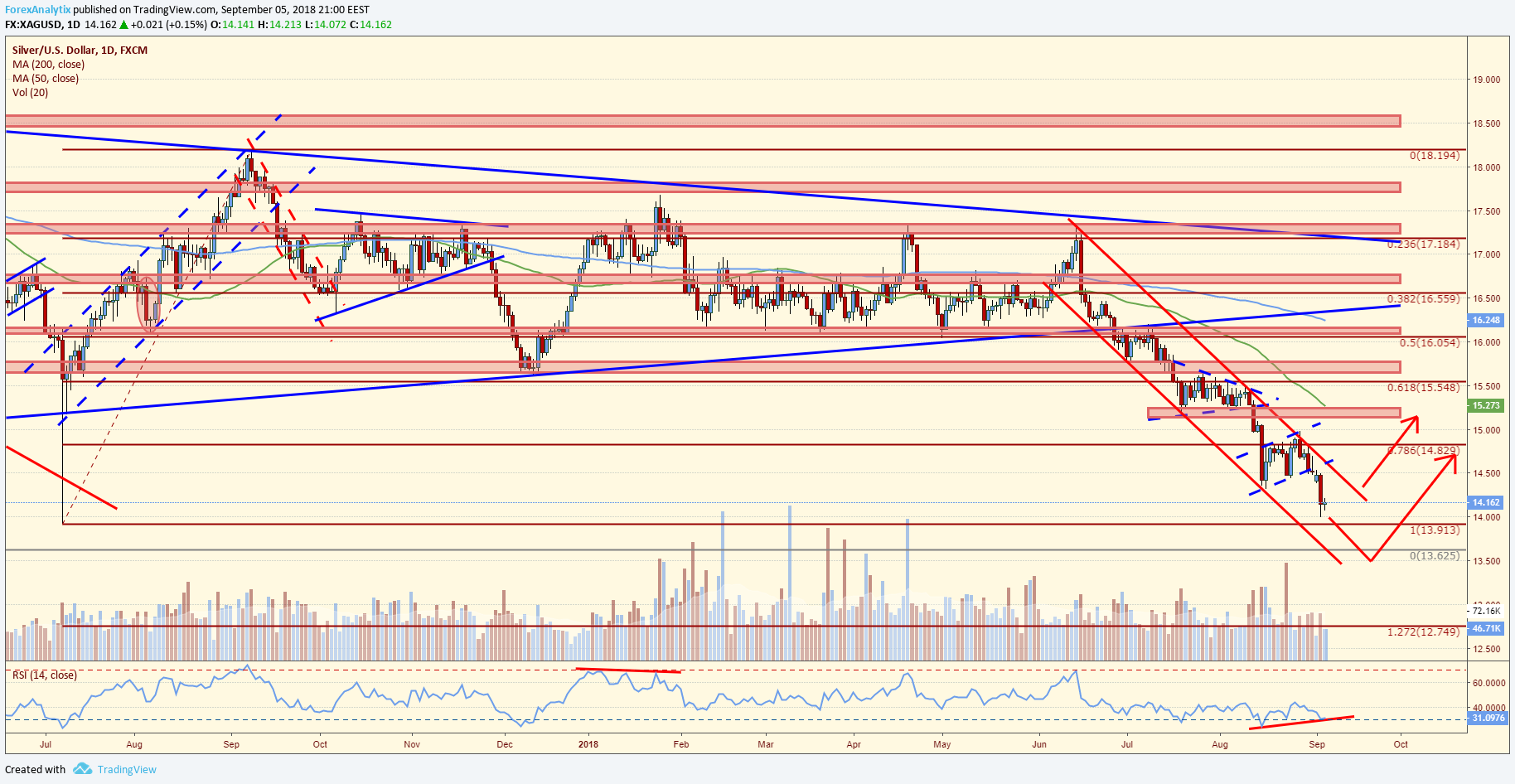 If we ignore the lower time frame charts on gold, and focus on weekly timeframe instead, we can actually notice that metal did not make any clear directional movement since 2015. All what we see are big swings in $1050-$1400 range. Normally this type of a price action represents a correction rather than impulse. So if we want to understand in which direction market can break out once consolidation is done, then we have to look back to see where the market came from. Well, we can see a very strong five wave fall from above $1900 level; it’s called an impulse that represents wave A as only one part of a big decline from 2011 highs. So if we are on the right track, then a new drop below $1000 will follow, maybe later this year or at the start of 2019 once corrective wave B is finished that we see it making a triangle. This is a five wave pattern and ideally now in final piece of the puzzle; wave E which may see resistance at $1240-$1300 area. What should be important as well, it’s Dollar Index that is making a five wave recovery since January which means more upside on DXY equals to more weakness on gold. If you are a member of our ForexAnalytix service with an Elliott Wave package, then you exactly know what I am talking about. 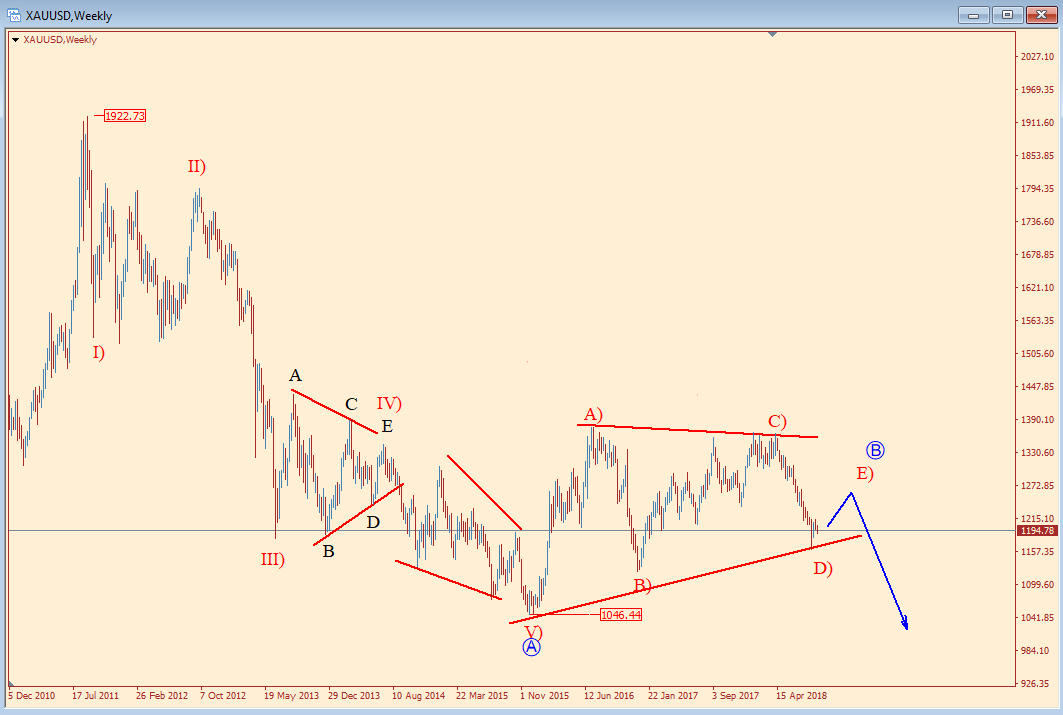 Not a member yet? Why not to see our DXY charts through our Trial Package for only 1USD.

Elliott Waves has a clear outlook on Gold

EURUSD, where to from here?
Scroll to top