The French second round elections confirmed the pre-race favourite and Macron was elected president with an impressive 66% vote share. This result was greeted with relief and joy throughout Europe. But what lies ahead now for France and the EU?

This victory has certainly bought some time, but the French people want to see change and tangible results. This was after all the reason why Marine Le Pen made it to the second week run-off. It was primarily a frustration vote as the public gradually grew tired of the status quo and wanted change. Macron now has 5 years to provide solid results, or Le Pen will surely win the next presidential elections. 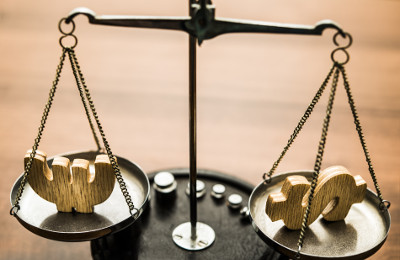 Macron is a progressive, Europe-friendly politician with big ambitions. He is the youngest French President in history and that has come through hard work and dedication. The road for him will be far from easy. The first hurdle is coming up shortly, and that is the French legislative elections. They will be held on the 11th and 18th June and will elect the 577 members of the French National Assembly. Remember that in the first round of the Presidential elections there were 4 parties with 20-25% votes (Macron, Le Pen, Fillon, Melenchon). As a result it’s going to be a tall order for Macron to secure a parliamentary majority and without a majority it will be difficult to pass his legislative agenda.

Macron also has the big task of turning around the stuttering French economy. Unemployment remains stubbornly high above 10%. Youth unemployment – a plague among many European countries – is still above 23%. Other important indicators such as economic growth are also underperforming many of the other EU countries.

Another key issue that he will have to tackle is Brexit. Macron is a vocal advocate of a united Europe and he will have to guide France through the process as he becomes a key part of Brexit talks. He will also aim to forge and maintain a strong relationship with Germany, even though he has differing views in some important issues such as Greek debt relief.

Last but not least, Macron will have a tough time addressing what is possibly the biggest issue with French citizens right now: security. After all, security was one of Le Pen’s main pre-electoral selling points. On one hand, Macron’s rhetoric is for an open and accommodating progressive country. On the other hand, he needs to do everything in his power to stop the violence & attacks against his country. At first glance it seems like an impossible compromise.

Overall, Macron’s victory was a big positive step for France and the EU. However, it cannot be considered it a success unless he successfully manages to steer his country along the perilous road that lies ahead. France and the Euro have dodged a bullet, but can they pull it off?

What do the charts have to say?

The EURUSD gapped higher after the 1st round of the elections finally breaking the multi- month triangle formation. The past couple of days have produced a pullback but as long as we remain above the 1.08 zone the pair looks constructive. That being said if you think that this thrust higher was “terminal” and you are looking to have short exposure to the pair we have a better suggestion. Be long USDCHF. 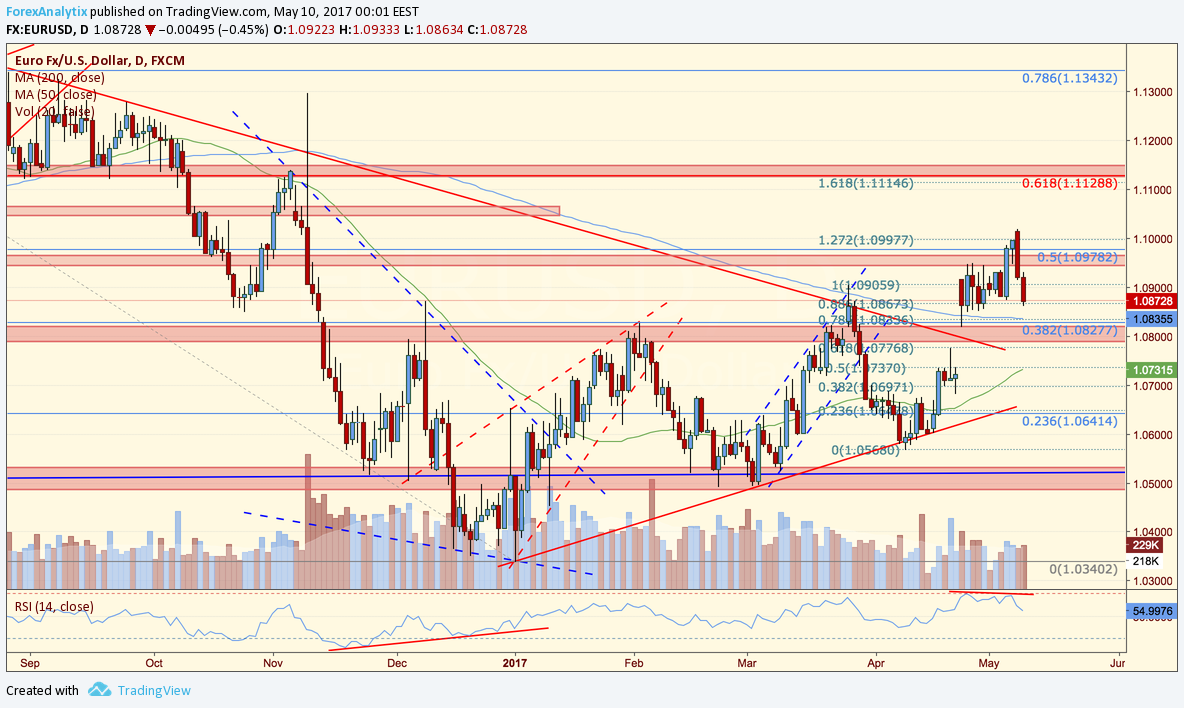 The USDCHF has benefited from the weakening of the SHF (a natural outcome of reduced EZ tail risk) and this is the reason it actually never broke out of its triangle (it is usually almost perfectly inversely correlated to the EURUSD). As mentioned above if you want to be short the EURUSD you might want to gain some long USDCHF exposure instead.

Note: The pair is breaking higher! 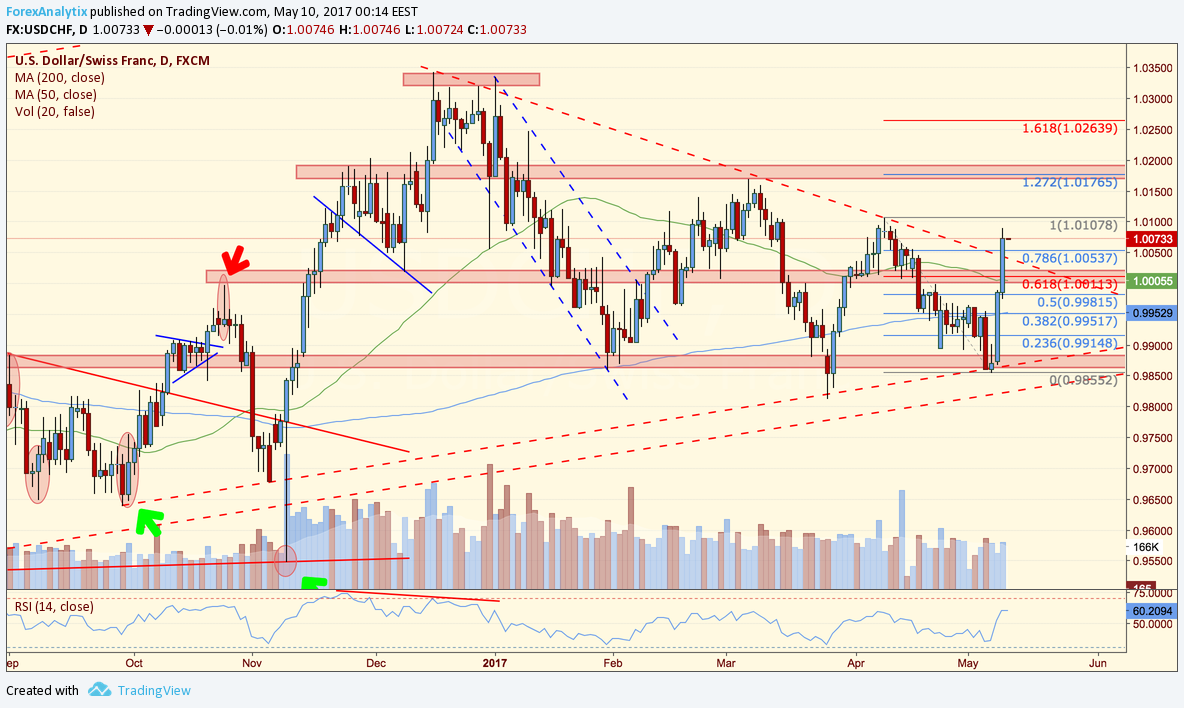 The EUR/CHF has been one of the big gainers following the French elections. When Macron/Le Pen took the first round, the EUR/CHF gapped above the 200dma, and we have managed to respect that level for the last couple weeks going into the second round. Once Macron secured the presidency, the EUR/CHF moved above the downtrend line and is quickly approaching the 1.0980 level, or the 61.8% Fibonacci retracement from the 2016 highs to lows. Buying the pair now may not be the right time since we have moved up so quick and so close to the major Fibonacci level, but on dips back to 1.0900 may be a good place to look for manageable risk longs. 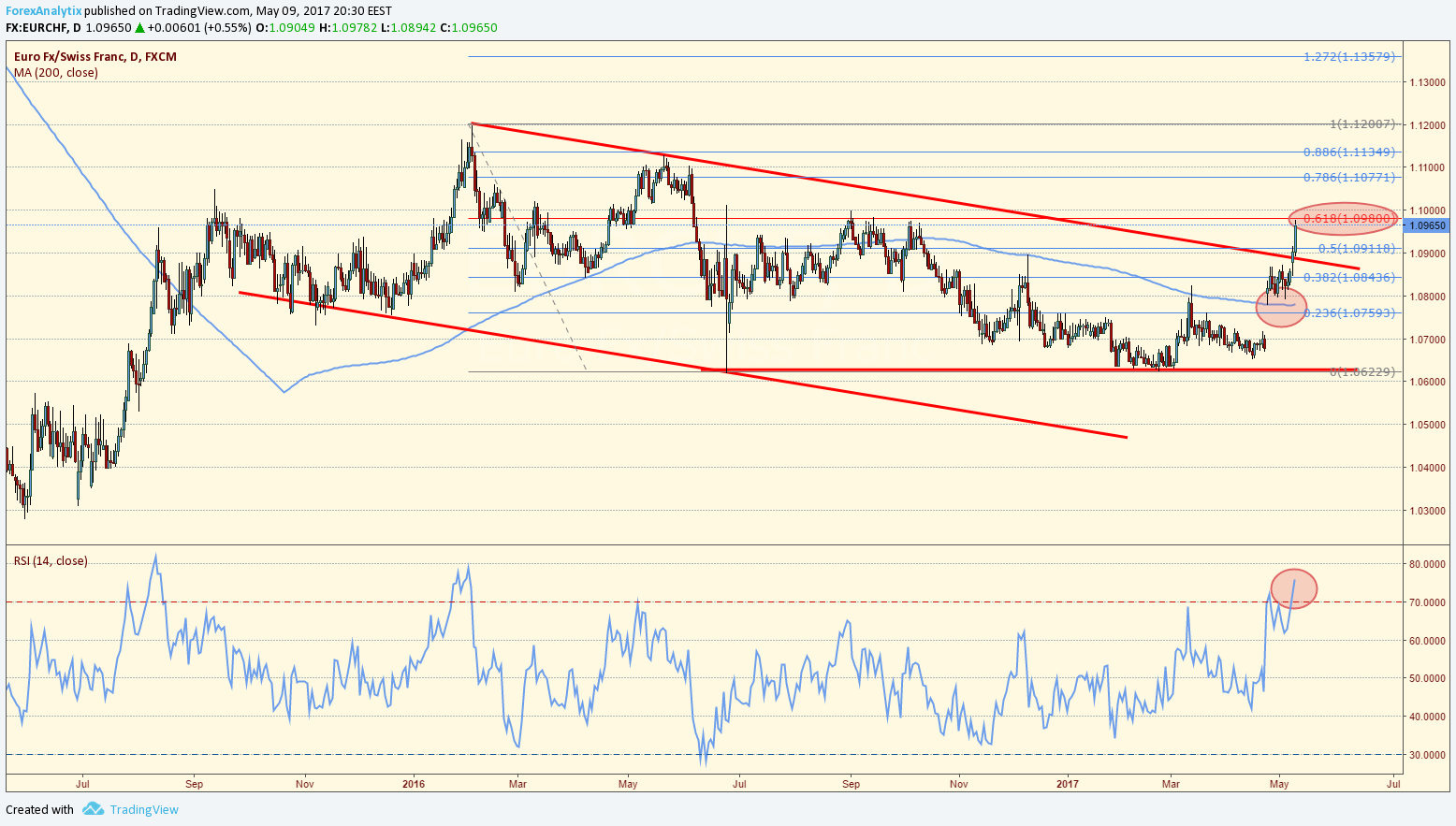 The EURJPY has been trading in a textbook manner from a technical perspective. After breaking above a L/T descending channel the pair corrected lower to retest the channel (this time as support) before launching higher once again (see weekly chart). There is little doubt in our opinion that the move higher is impulsive and we are looking to buy dips at a retest of the broken T/L resistance (see daily chart). 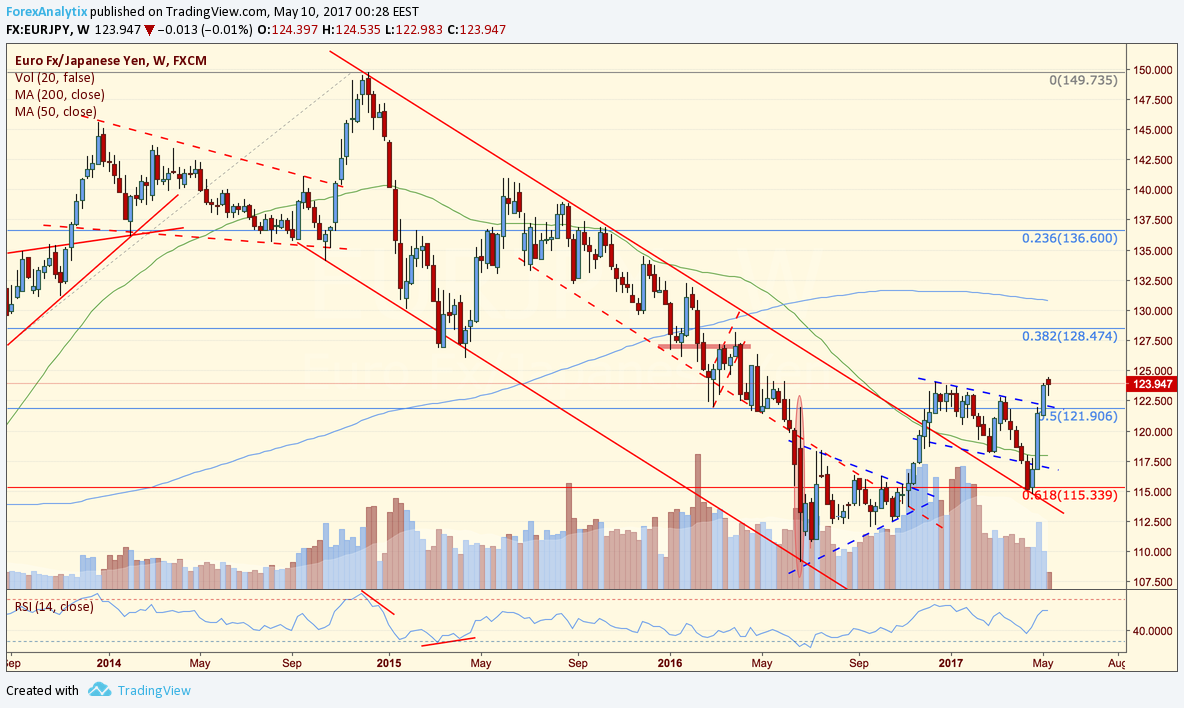 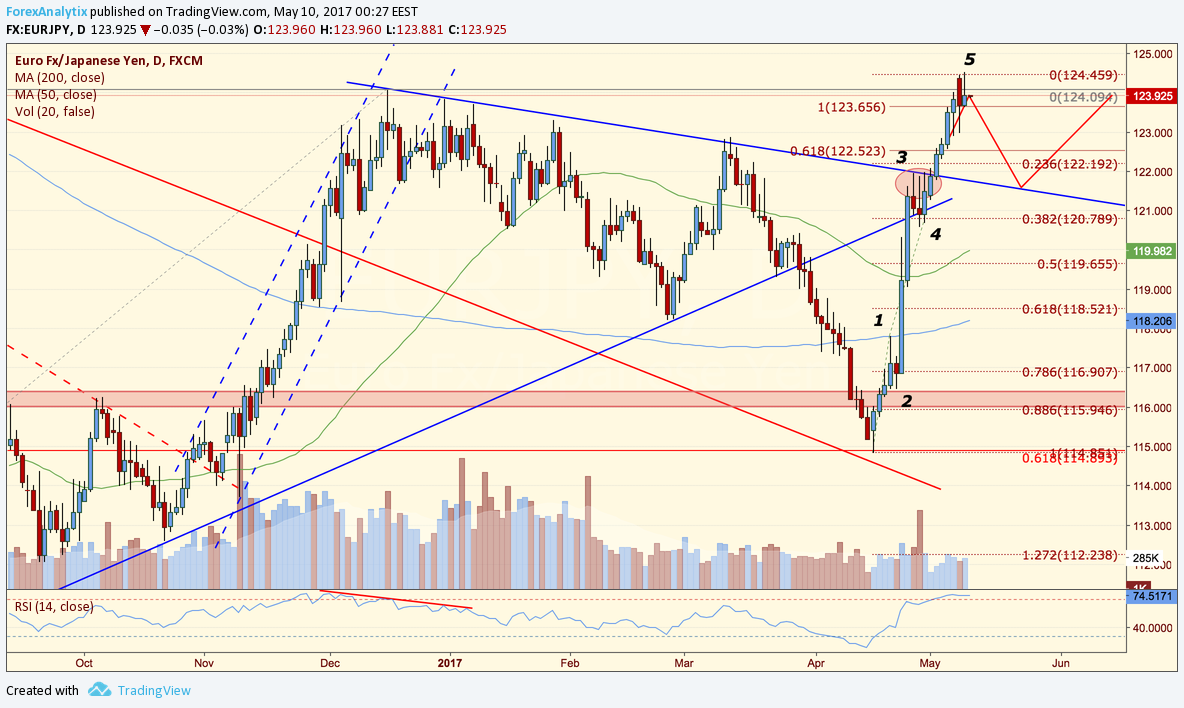 We need to comment here that other EUR cross rates like the EURAUD the EURNZD, the EURCAD, the EURNOK and others have decisively turned higher but are currently overextended and show signs of upcoming corrections. There will be a follow up post when we consider that they present buying opportunities once again.

The EURUSD has reversed this week at important confluence of Fibonacci resistance and harmonic patterns.  The 50% retraces from the Aug 2015 highs and May 2016 highs and bearish ABCD patterns from the January and March 2017 lows.   The confirmation level for this bearish reversal is 1.0837-55 where we also have the 200 day MA, finding and holding support here would keep the EURUSD uptrend intact. 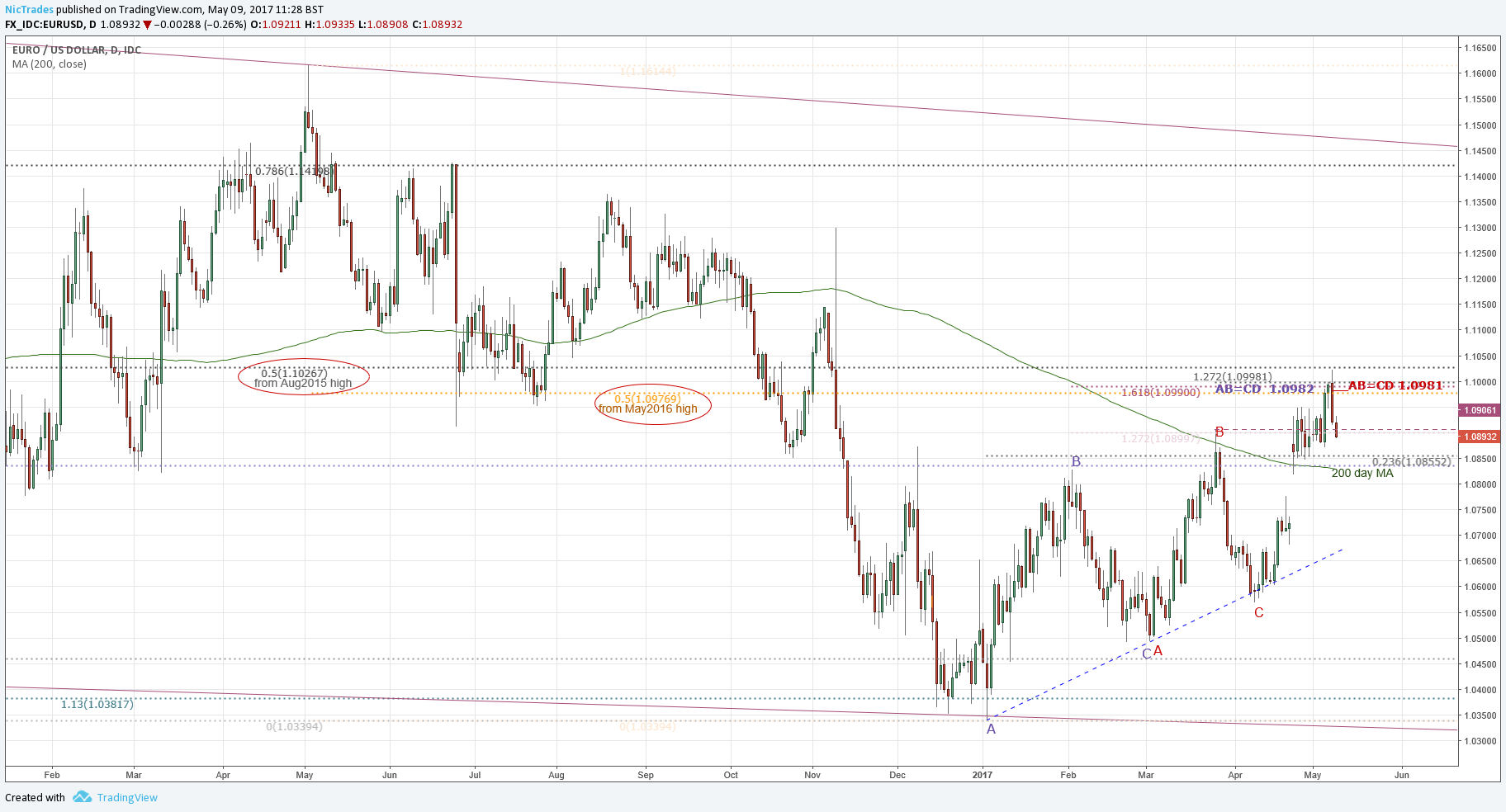 The EURGBP weekly chart shows the Summer 2016 rally terminated at a 0.786 retrace level from the December 2008 high.  Reversals at a 0.786 usually return to the 0.386 next which is at 0.8020. The question is therefore how do we get there.  The EURGBP has been in wedge consolidation since November 2016 low and a weekly close below 0.8340 would be a bearish trigger to go straight there.  This is the more bearish scenario long term for EURGBP. However a downside break of the wedge does not make a measured move ABCD pattern, to see that we would need a break to the upside first to around 0.9000 and then a second leg lower in an ABCD pattern correction which is more bullish for EURGBP. 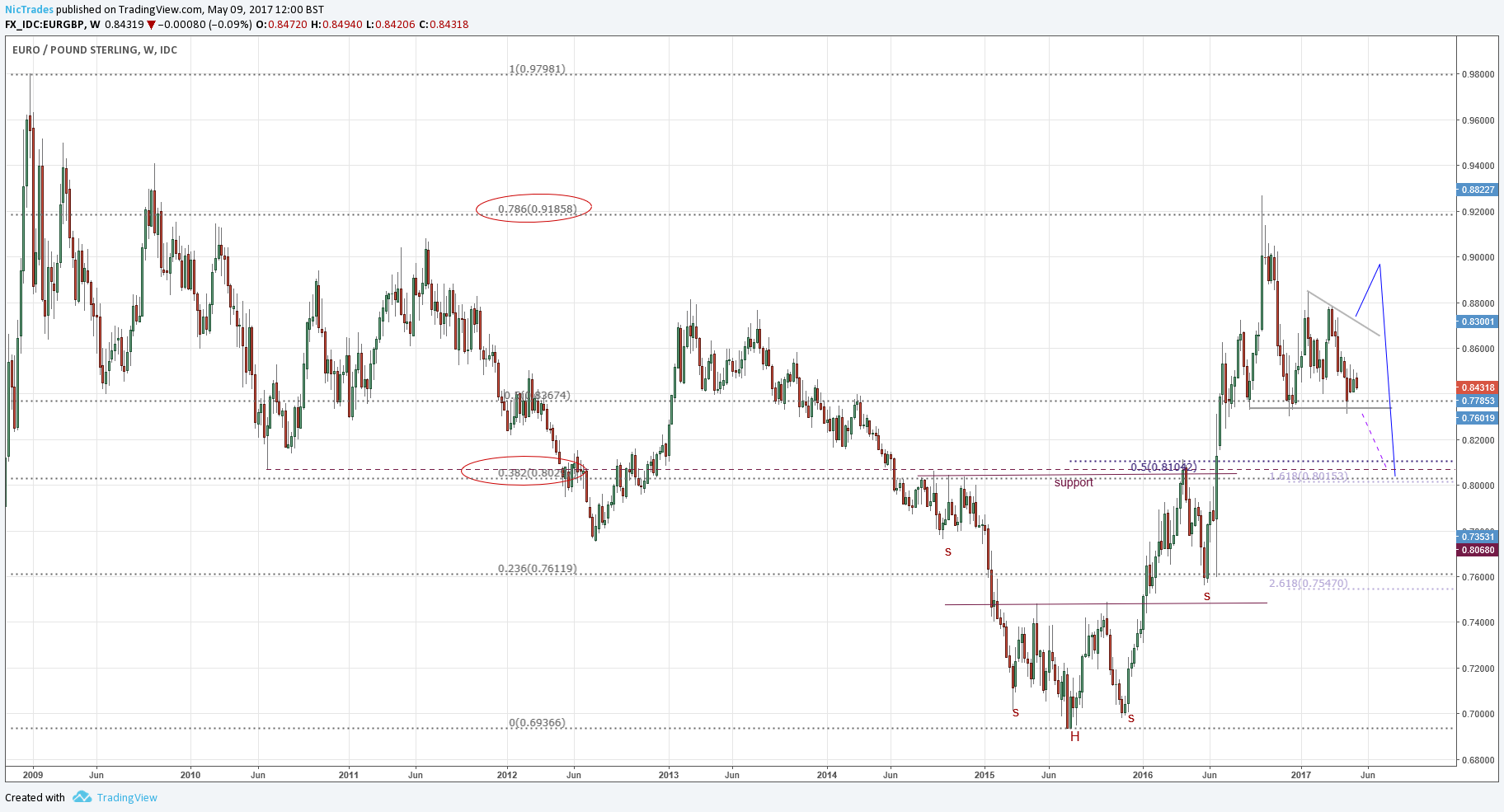 EURUSD has been trading higher during the past three weeks and specifically since the first round of the French elections that created the gap from 1.0700 to 1.0900 level. Technically I assumed that euro recovery is going to be temporary based on an Elliott wave look on higher time-frame charts where the big decline seems to be incomplete. On the other hand I was closely monitoring the 1.1000 level, as this was seen as a nice psychologican and technical resistance area. Notice that the market tested that channel and the Fibonacci resistance (wave Y = wave W), and (wave C = wave A in Y) zone nearly two days back from where we can see a nice reaction lower. This sell-off looks impulsive on intraday charts, so we can assume that the Euro is currently headed lower. From a longer term point of view, this will result into a larger impulsive sell-off, but as always we are trying to focus on minimum expectations, in this case a minimum of a three wave drop back to the open gap area since such gaps stay open very rarely, especially on FX market.

If the EURUSD stays bearish like aforementioned then I am also looking at some other crosses that may be pressured, such as EURCAD, or EURGBP. For the EURCAD especially if Crude Oil holds the recently established 44.00 low you can expect a strong move to manifest. 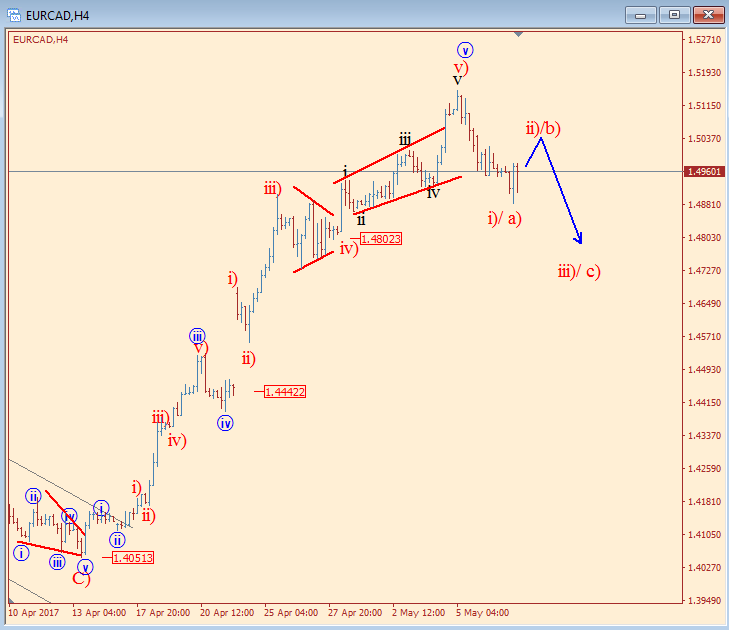 EURGBP seems to be on the verge of a breakdown after that triangle formation showed us signs of completion at the end of March. It was placed in wave B so the market is expected to resume lower into wave C, towards the 0.8100 area. 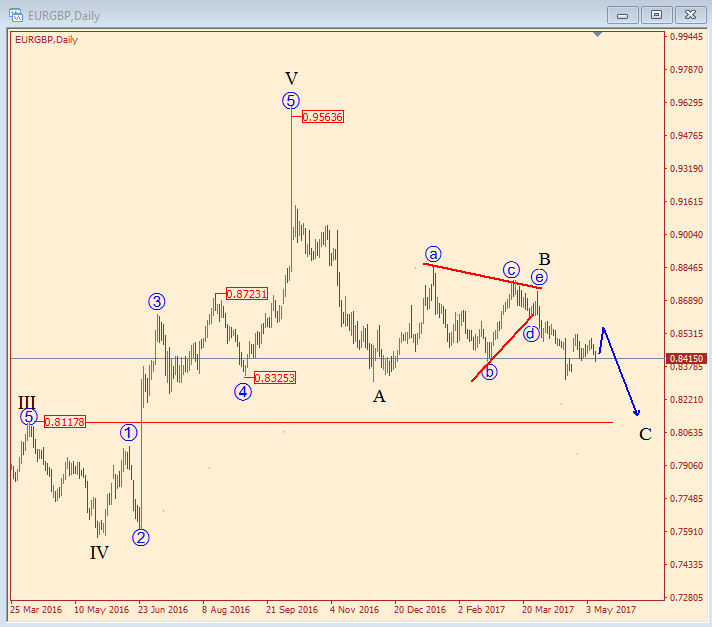