The Turkish Lira on its way to new lows? - ForexAnalytix - Blog
Click here to open Help

The Turkish Lira on its way to new lows?

You are here: Home / The Turkish Lira on its way to new lows?

Turkey is certainly a very interesting and, at times, controversial country. As a result the Turkish Lira can exhibit very volatile behaviour, something that has been particularly evident over the past decade.

Turkey is a large country, both in terms of surface area as well as population. What’s interesting is that, contrary to most Western countries, its demographics are not deteriorating; population has been steadily increasing over the past decade, rising from 70 million in 2007 to 80 million in 2017. With rising internal demand the country is also experiencing a rise in internal production, although Turkey still suffers from significant trade deficits.

Following the global financial crisis, Turkey’s economy has done quite well. GDP growth has stabilized in recent years at around 3-5% annually. The major shock in 2016 (a failed coup attempt) was quickly overcome as the country continued along its path of expansion. Foreign investment has increased although the country’s inherent political uncertainty is not allowing it to pick up pace dramatically. There has been a lot of effort and capital put into Turkey’s tourism industry and they are seeing some very positive results. Turkey is now a major tourist destination, both for low and medium-budget customers (traditionally Turkey’s main target group) as well as for high-end customers. The latter are now served much better following the overhaul and modernization of many of their Aegean coastline marinas and hotels.

However, it’s not all good news for Turkey. Some other economic data is mixed at best; for example inflation has hit double digits mostly due to the Lira’s depreciation, as the Turkish central bank tries hard to contain its currency. Unemployment has recent downward momentum but still stands at around 12%. Labour force participation rate is very low at 52%. To counter this, the Turkish government launched its “national employment campaign” in early 2017. The employment cost of newly hired individuals is subsidized by 30% for a year, or for 4 years if the individuals are young or female.

Arguably though the biggest problem for Turkey is domestic political tensions. President Erdogan is seen as trying to gain as much control as possible over the country’s function. His efforts to control the media, state organisations and even the judiciary have been heavily criticized. In particular, jailing journalists who oppose him has been met with great disapproval and Turkey ranks very low in rankings such as freedom of press and legal efficiency. Furthermore, Turkey lies in a difficult geopolitical location. It has problems internally with the Kurdish population, as well as severely strained relations with some of its neighbouring countries.

Turkey is in urgent need of a stabilizing political force that would bring back stability and boost its economic prospects. At the moment this seems like a distant dream, and this is the main reason why the Lira will probably continue to see weakness in the near term. 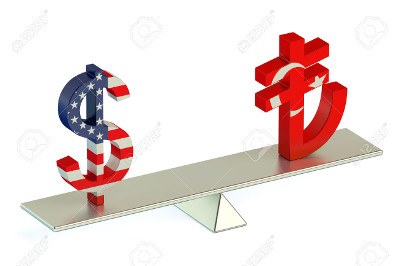 The Lira from a Technical Analysis Perspective

The USD/TRY is in an uptrend since the start of 2008. During this long run higher we have had plenty of consolidation periods / corrections but the trend has remained strong nevertheless. This time seems to be no different, after a strong run higher from April 2016 to January 2017 the pair corrected lower to the 38.2% Fib within a descending wedge. During the past month the USD/TRY formed an inverted H&S pattern (more clearly visible on the 4h chart) which led to a break out of the wedge, in a typical bullish reversal pattern. What makes this particular chart unique is the pivot off the 200DMA which held as support on several occasions. The RSI was also consolidating and broke higher out of a triangle formation as well. The immediate target is the 38% retracement at 3.6527, which is also near a spike higher from this spring. If broken, the pair could rally past the 3.7000 level towards the 50 or 61.8% Fibonacci retracement levels and why not eventually hit new highs. 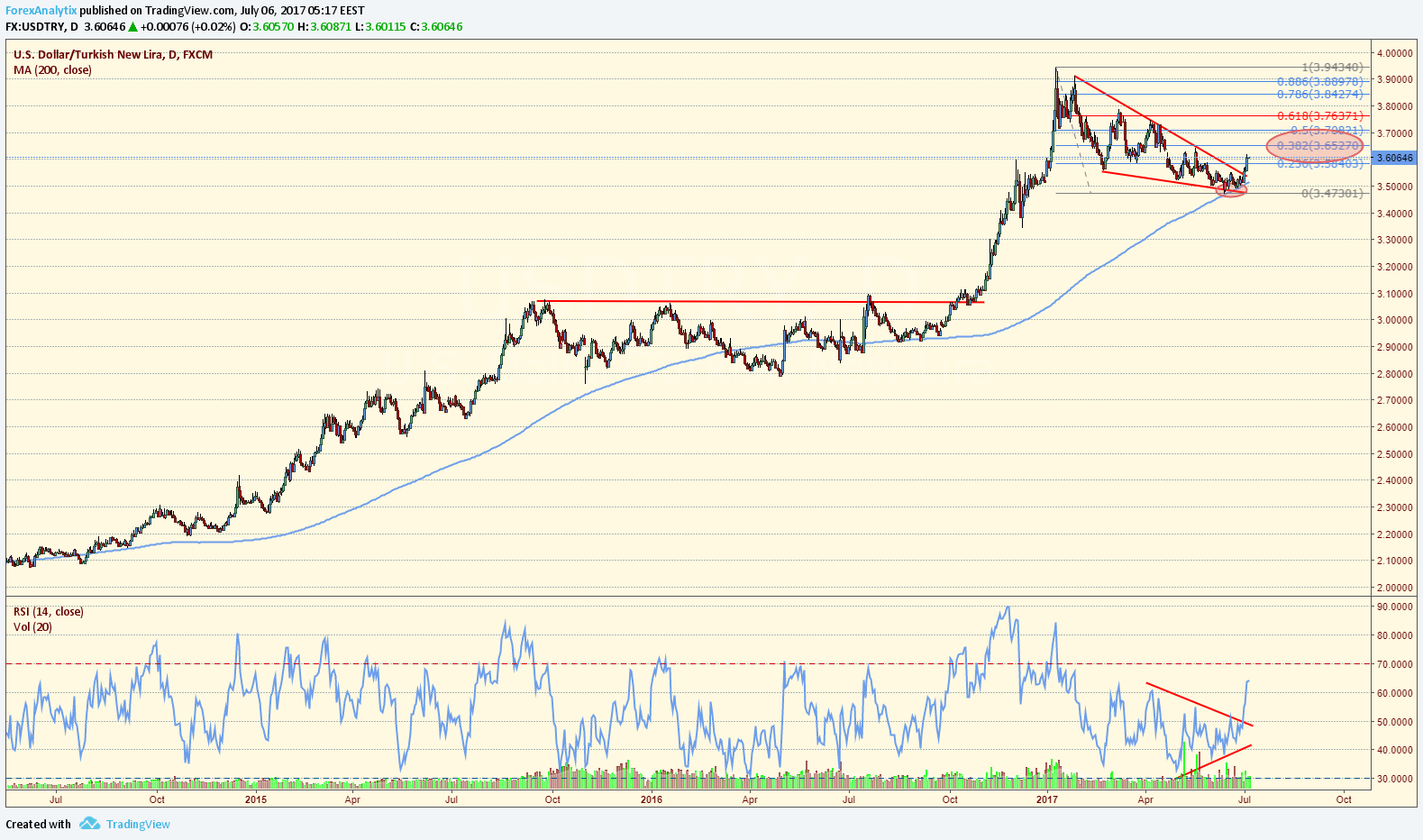 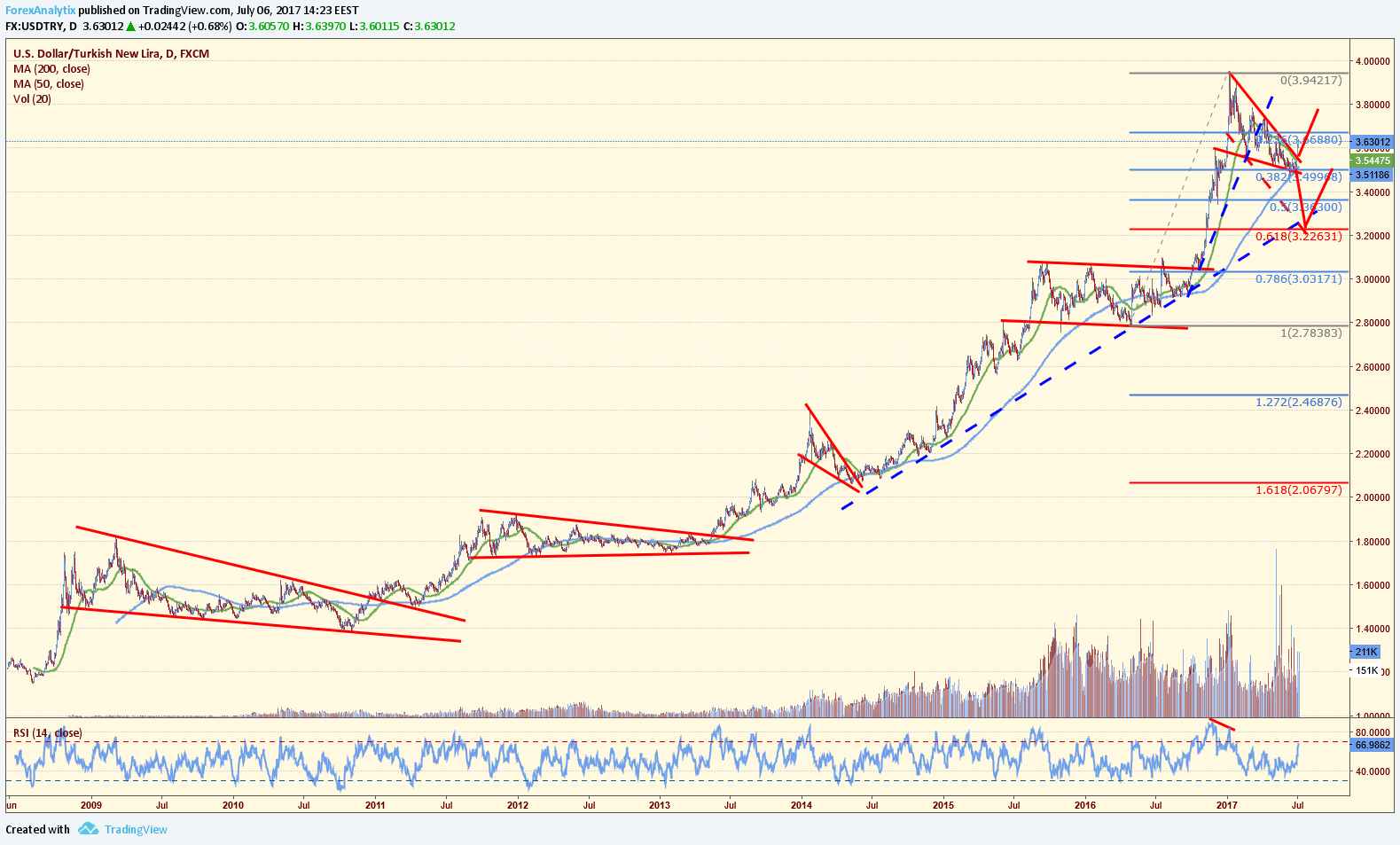 The USD/TRY Elliott Wave pattern is clearly bullish since 2008 and it appears incomplete. What we currently see is actually an impulse in progress; a five wave pattern where the fifth wave is still missing. There was a nice push up in the last few weeks, out of a downward channel, which suggests that a new leg up is now unfolding. We are talking about black wave five that may eventually touch the 4.0000 psychological level this year. 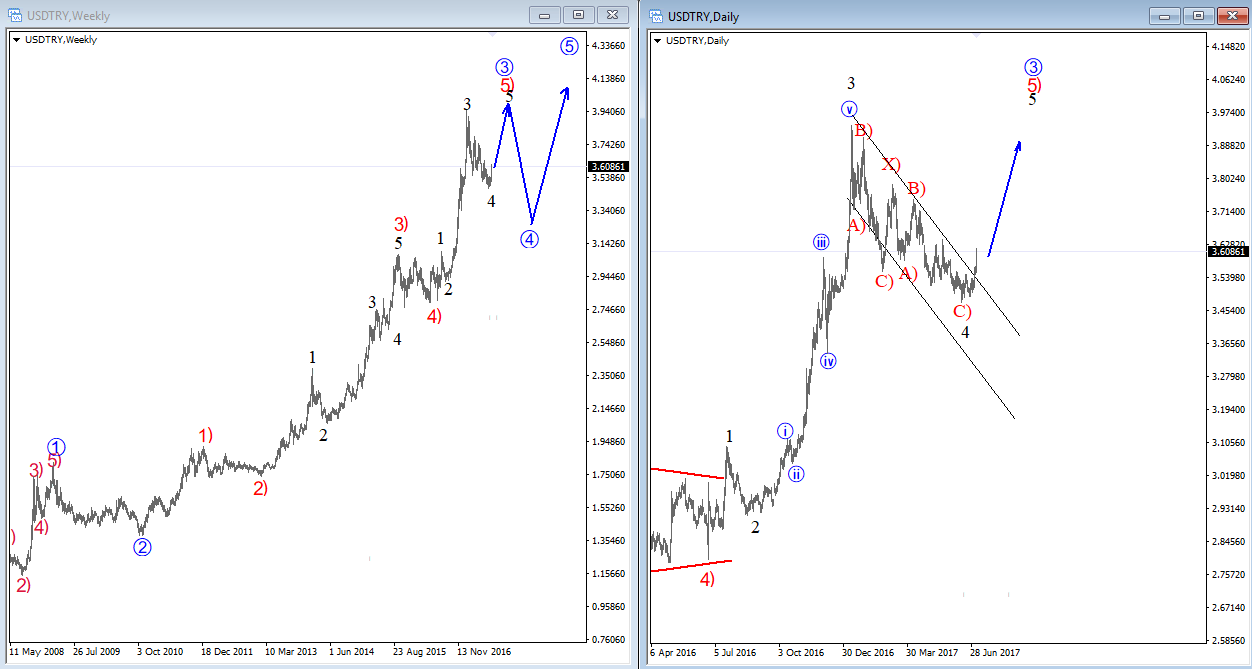 The Peso is reversing once again.

This Week’s Harmonics Preview by Nicola Duke
Scroll to top