Shorting the US Dollar in 2017 was the trade, what about 2018? - ForexAnalytix - Blog
Click here to open Help

The US Dollar saw a substantial decline in 2017 as the Fed continued its hiking cycle that started in late 2016. As we’re starting the New Year, what’s the macro outlook for the US and the Dollar?

In my view the Dollar will probably not see such an extended drop in 2018, but it will also struggle to find any meaningful strength. The most likely scenario is a slow grind lower towards the 86-88 area in the DXY. The reasons for this are straightforward:

From a macro perspective it’s difficult to be bullish the USD for 2018, but there’s no guarantee that the Dollar will go down in a straight line. Positioning and sentiment is getting very one-sided and this could very easily provide choppy two-way action on the way down.

Blake’s Outlook for the Dollar:

If you have been a normal listener to our daily webinars, you know on inauguration day of Donald Trump, we were looking for shorts in the US Dollar for many reasons (a couple listed below) and it was almost a one way trade most of 2017. If you look at the chart, and just see what happened, in retrospect it looked almost “too easy.” 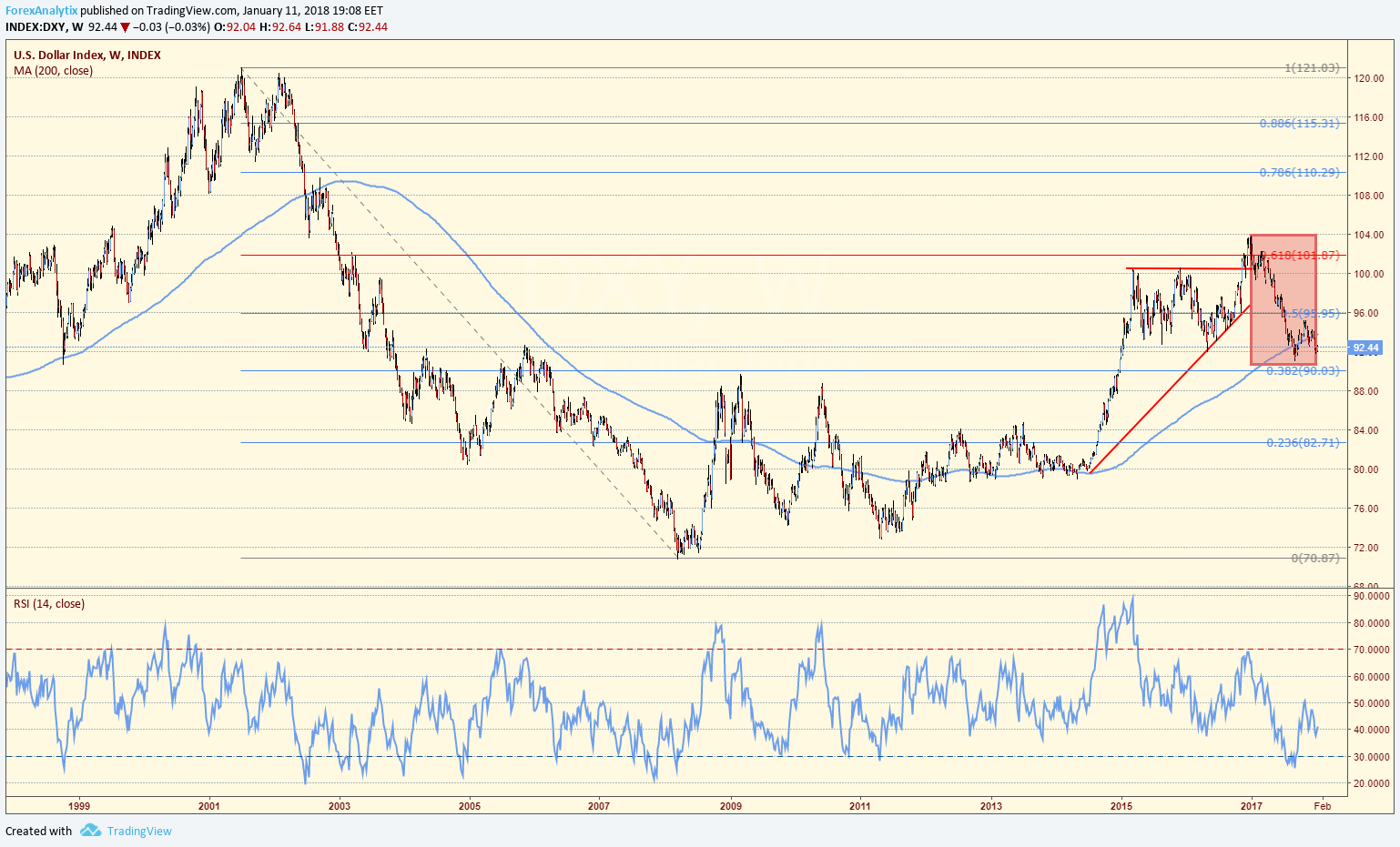 Between the major Fibonacci rejection at the 61.8% retracement, false breakout of highs, and majorly divergent RSI, we had the technical makeup of a reversal the beginning of 2017.

And the fundamental backdrop seemed right at the time as well. To name a few:

Of course, you could tack on other reasons, which may be more/less important, but I’m sure you would agree we are not here to give you a history lesson, but look ahead into 2018.

So, what’s really changing in 2018? In my opinion, not a lot. However, yields are starting to rise globally, and this will put pressure on other central banks to continue to work in a “tighter fiscal policy” throughout the year. This could also introduce other risks like falling bond prices and potentially a give the equity markets a headwind as yields rise as well. We still feel that the Trump administration will have its hands full as they focus on trade and infrastructure plans (we saw how well tax legislation went considering everyone was in agreement changes needed to be made, whether or not you and I agreed with them). And as far as central banks, we are going to see a lot of back and fourth on expectations of “how far and how fast” rates will go up when talking about ___________ central bank.

One of the other things we should discuss is that we entered 2018 with the largest speculative long interest of the EUR. EVER! Usually, that doesn’t end well. So, we may see a large reversal in the EURUSD (that is bullish US Dollars) near term as the speculative market usually has it wrong.

So, in a nutshell, this year will be a lot messier with “price action” in the FX market and the direction of the US Dollar. Do I feel the US Dollar will continue to trend lower still? Yes I do. Will it be a straight line? I doubt it. My long term charts look like this: 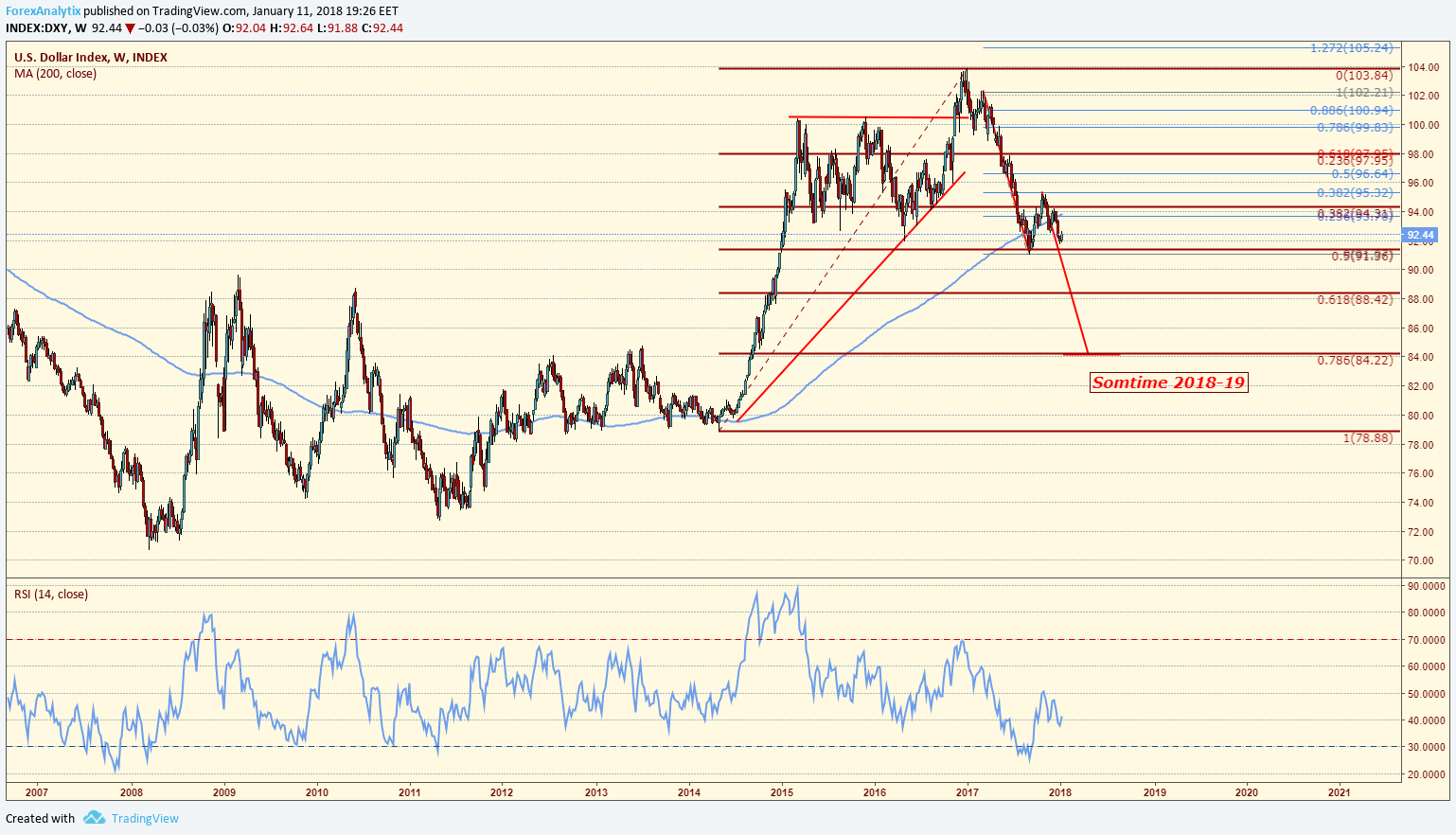 But in all actuality, it will end up something like this:

The bottom line: As a trader, I welcome some needed volatility. Volatility for us give a trader an opportunity to “mistime” an entry, and still be right eventually. It also gives us some chances to trade in both directions in a relatively small time frame. But ultimately, if you are looking to just be really directional in 2018 because you missed 2017’s US Dollar selloff, you may be in for a rude awakening. In addition, events (geopolitical and financial conditions) are changing at such a rapid rate, in about 3 minutes from the time you read this blog to the end of 2018, we may have to scrap the “Sell US Dollar” theme and go the other direction.

Looking for areas that a S/T bottom might form in the DXY we have 3 levels of interest. The 1st one is the projected target of the H&S formation which got triggered on a break lower from the 92.60 neckline which comes at 90.03. The other is the 127% Fib extension from the May 2016 low to the January 2017 high that comes at 88.68 and the 3rd one which is very close to the 2nd is the 61.8% Fib of the strong bull move that started in 2014 to the January 2017 high which is at 88.42. We will be closely monitoring these areas for a reversal signal, expecting that both the positioning and sentiment of the market at these levels is going to be at or near extreme levels (a combination of factors that can trigger a more violent than expected reaction). 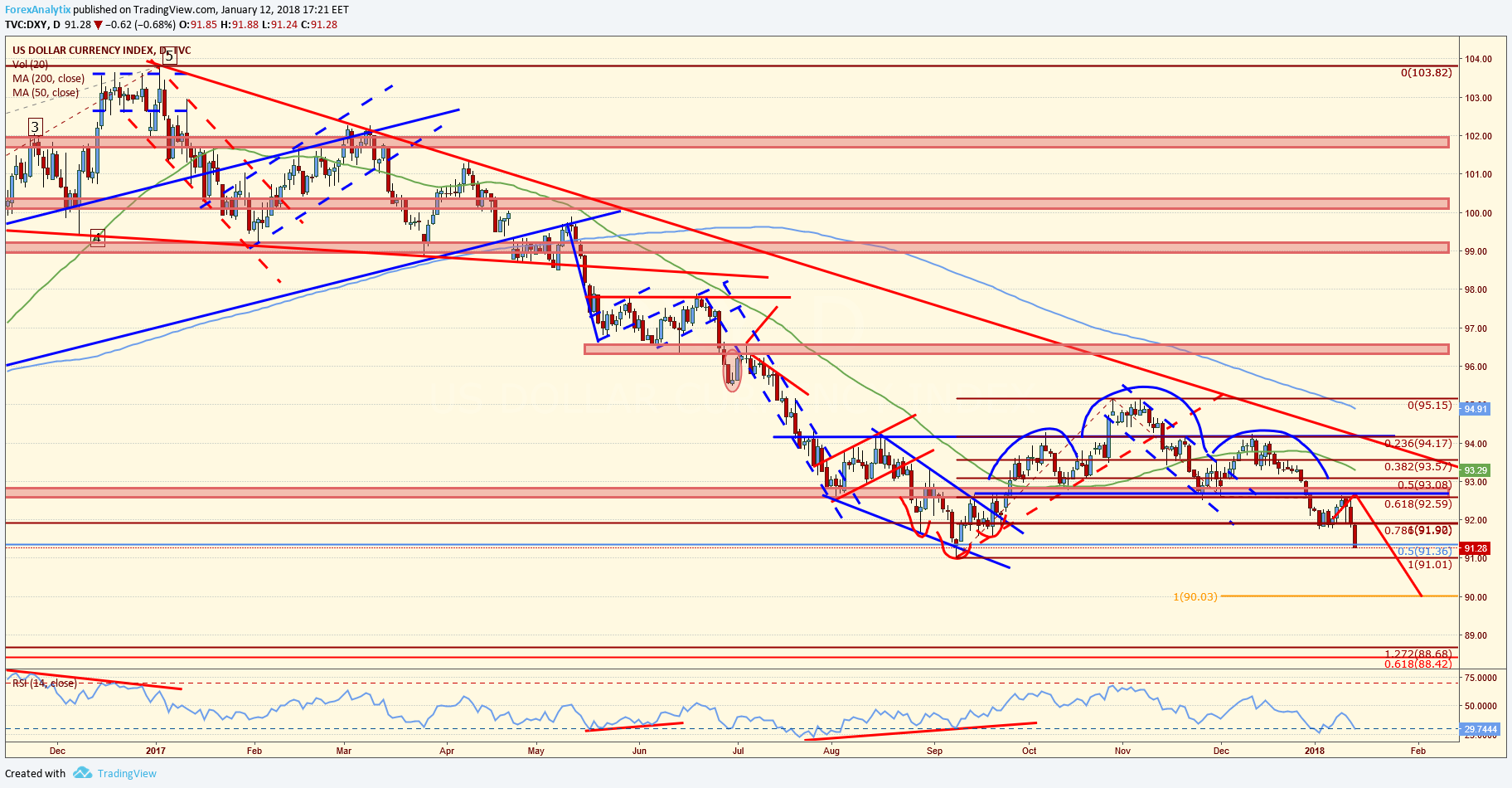 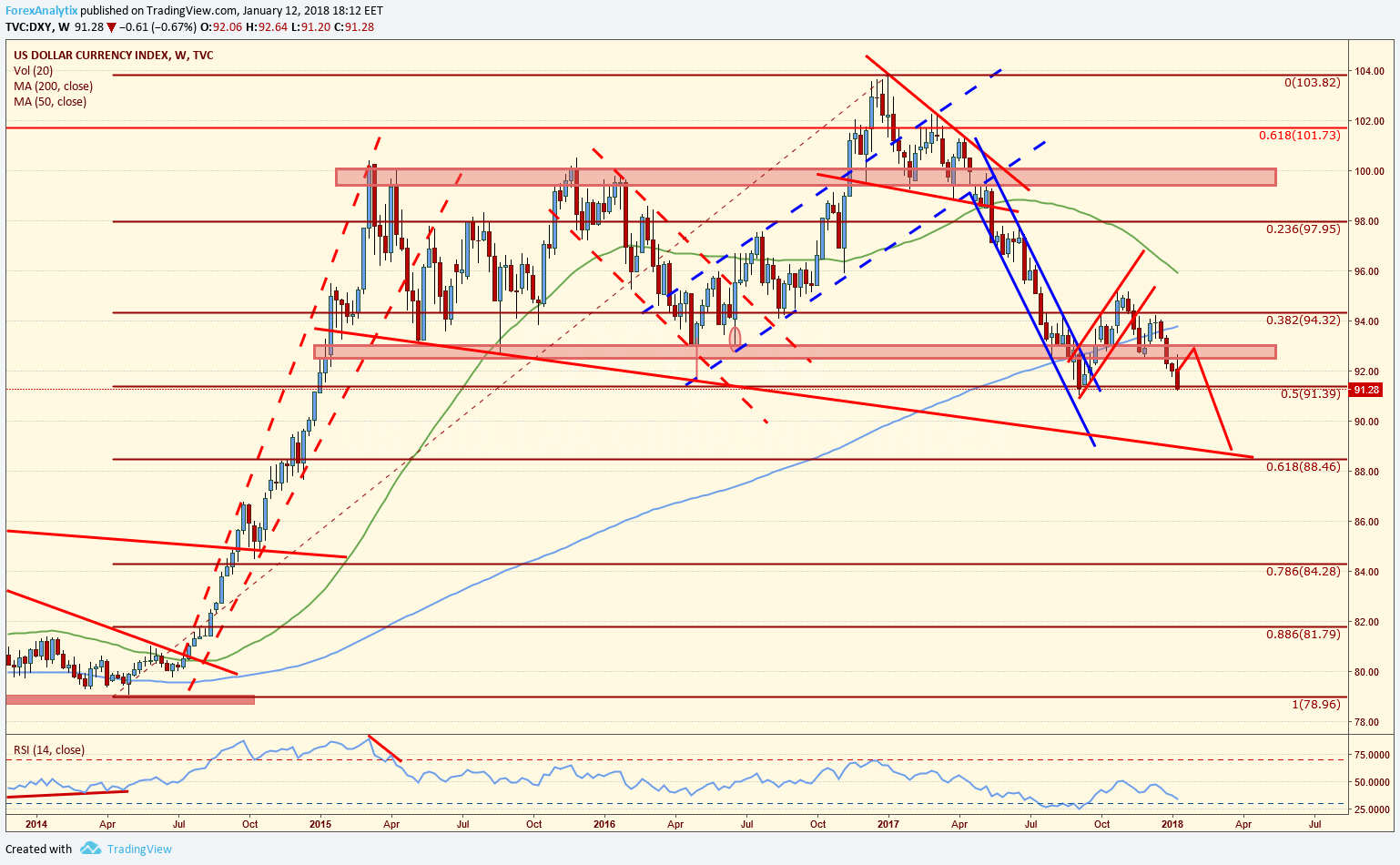 The S&P may have peaked near term, but what does it say about the US D...
Scroll to top