Oil Exhibits Wild Moves – How, Why, What’s Next?

You are here: Home / Oil Exhibits Wild Moves – How, Why, What’s Next?

A lot has been said about oil in the past days, and we have seen unprecedented price action. There has been some serious misunderstanding as to what this price action actually represented, so we will try to explain our take on it.

Oil has been a very interesting product to trade, mainly because for decades its price has been heavily influenced by OPEC actions. The dynamics of oil price have been pretty straightforward as price reaches extreme lows or highs:

The Covid-19 outbreak pushed the global economy to uncharted territory, as we experienced a massive demand shock and supply chains ground to a halt. As a result, oil demand plummeted, and oil futures crashed to never before seen levels. During its last 2 days before expiry, the front WTI contract (May 2020) traded at single digits, and then quite incredibly it traded at negative values. How could this happen, why could this happen, and what does it mean for actual physical oil?

The first thing to consider is what an oil futures contract actually means. The buyer of one WTI contract, if held to delivery, has the right to take delivery of 1000 barrels of oil according to a set of standard specifications. The seller, naturally, has to deliver it to the buyer. The vast majority of futures contracts never make it to actual physical delivery; rather they get closed out before expiry and – if required – rolled over to the next futures contract.

As the world currently stands in April 2020, available physical storage of oil has all but disappeared. Storage silos, containers, and even supertankers have all been filled-up with some very cheap oil. This makes sense, as the inevitable production decrease will materialise and in the medium term oil price will start to rise again. This might make sense in the medium term, but what about the very short term?

The short answer is that those who are long the futures contract realistically don’t have the option of taking delivery of physical oil upon expiry. If this is the case, then the futures contract would be free to trade at prices that could potentially make no sense. It could trade at zero or even negative values, which is what has actually happened. There would obviously be a negative level below which, even with very high storage costs, you could get paid enough money to take delivery and place the oil in storage, and still make a good profit. How negative is this level? Is it -$50, -$100, -$500? It’s hard to say. What is certain though is that the futures price could never get to silly negative levels, but other than that it could trade freely within a pretty wide range of prices.

All the above points meant that the May2020 oil future price was effectively going to be trading in a manner completely unrelated to physical oil. To make matters worse, such unseen levels lured retail traders into trading this. Many people failed to understand the mechanics behind the futures price and went long thinking “it’s too cheap” or “how much lower can it go?”. There were even people hoping that, at negative values, you would get paid to fill up your car at the gas station (forgetting that taxes make up a huge part of pump prices). The endgame was pretty straightforward: a handful of algos were trading the futures contract against each other, and they steamrolled most of the unfortunate retail players who decided to take a gamble on it.

While the May futures contract showed such wild behaviour, the next contract (June 2020) was much more stable. It was obviously dragged lower due to the May contract’s shenanigans, but its range of moves was considerably tighter, at higher levels. In fact, the whole futures curve is upward sloping, meaning that the market expects oil prices to rise going forward. This is what’s called contango, and this takes us to the burning question:

“How can you make money trading oil, if you think that prices will inevitably go higher in the future?”

As we stand in April 2020, with oil futures prices in contango, Oil ETFs have the same problem: they try to track oil price by buying oil futures and rolling them before expiry. This means that, due to contango, you will lose money being long such an ETF even if oil price doesn’t move. In fact, you will lose money being long even if oil rallies, but not rally as much as the futures curve is pricing. During the last few days before expiry of the May future, the most popular oil ETF (“USO”) saw record inflows – this means that a large number of investors speculated on oil price going higher, and eventually lost out big time.

So, if you are bullish oil, it seems difficult to find an instrument that doesn’t implicitly require you to time the move to perfection, in order to be profitable. In fact, the most attractive option is probably to select one of the large oil companies and simply buy their stock. Companies like Shell, BP and Exxon, for which the risk of bankruptcy or nationalisation is theoretically low (it’s obviously non-zero though). Add the fact that these companies normally pay dividends as well, and the proposition becomes even more attractive. Of course, dividends can always be suspended, but for the moment they remain in place.

To summarise, from a fundamental and macro standpoint, oil price is bound to go a lot higher. The $40-$80 range is a good long-term neutral corridor and it may get there sooner rather than later. The coronavirus impact on oil and the global economy is profound, but “normality” will eventually return. Trading oil is a difficult proposition, with contango being the main obstacle between investors and potential profits.

Trading an Oil Rebound Via Stocks

Based on the 3 suggestions mentioned in the macro section above we will examine the stocks of 3 of the biggest oil companies. Royal Dutch Shell, British Petroleum (BP) and Exxon Mobil. We can see in all 3 cases that we have already seen a strong rebound from the lows which actually preceded Oil’s stabilization. That is partly due to the fact that contango made very costly going long crude outright and partly because these companies benefited from flows coming from investors that held positions in other oil companies but given the recent turmoil preferred to concentrate on those that are better capitalized and have a higher chance of surviving long enough to see (and benefit from) another cycle.

Exxon Mobil found a low at $30 and has been rebounding in an ascending channel since. So far the move looks corrective but even if that is the case a break above $47.50 resistance should extend the rebound towards $55 and the 61.8% Fib. 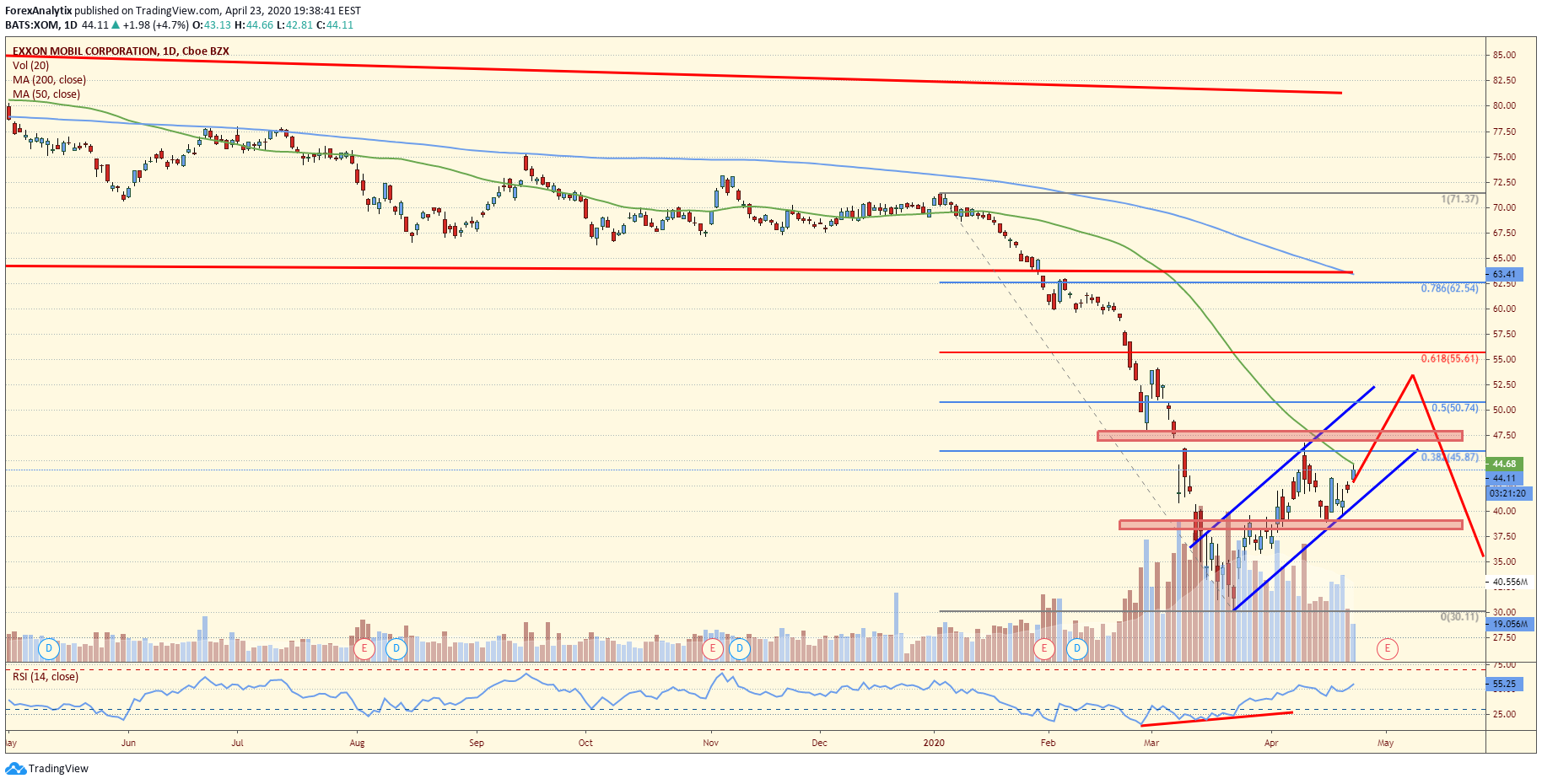 BP found a low at $223 and is rebounding within an ascending wedge. As long as it trades above $280 another leg higher to close the gap and tag the 61.8% Fib at $399 is probable and in any case the R/R is extremely favorable. 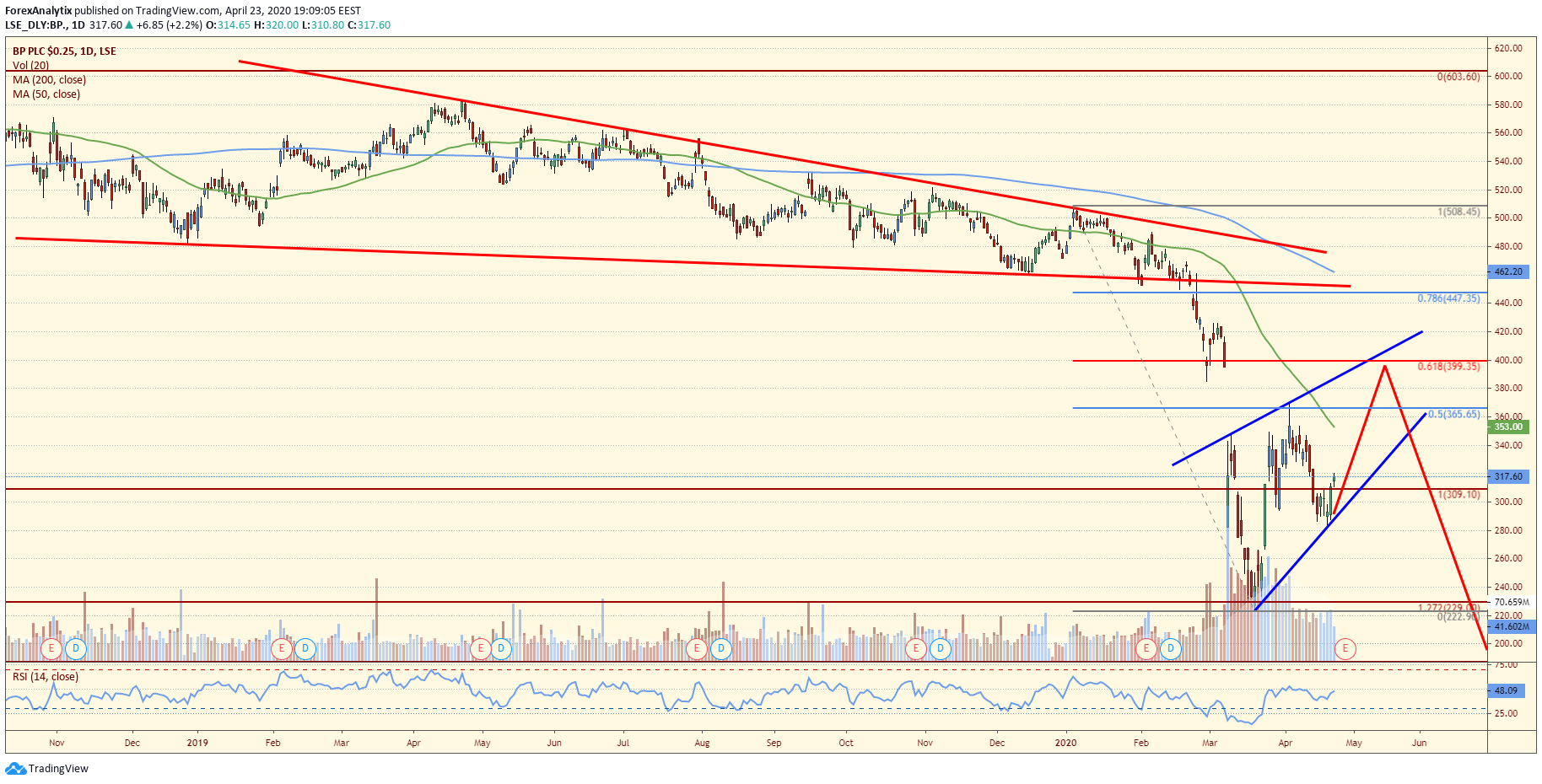 Shell has completed a 1st leg higher after finding a low at $10.70 but it is now likely forming a bull flag which would imply at least 1 more move to the upside. As long as we trade above $14 another attempt to close the gap at $21 looks likely with an extension to the 61.8% at $23.20 also probable. 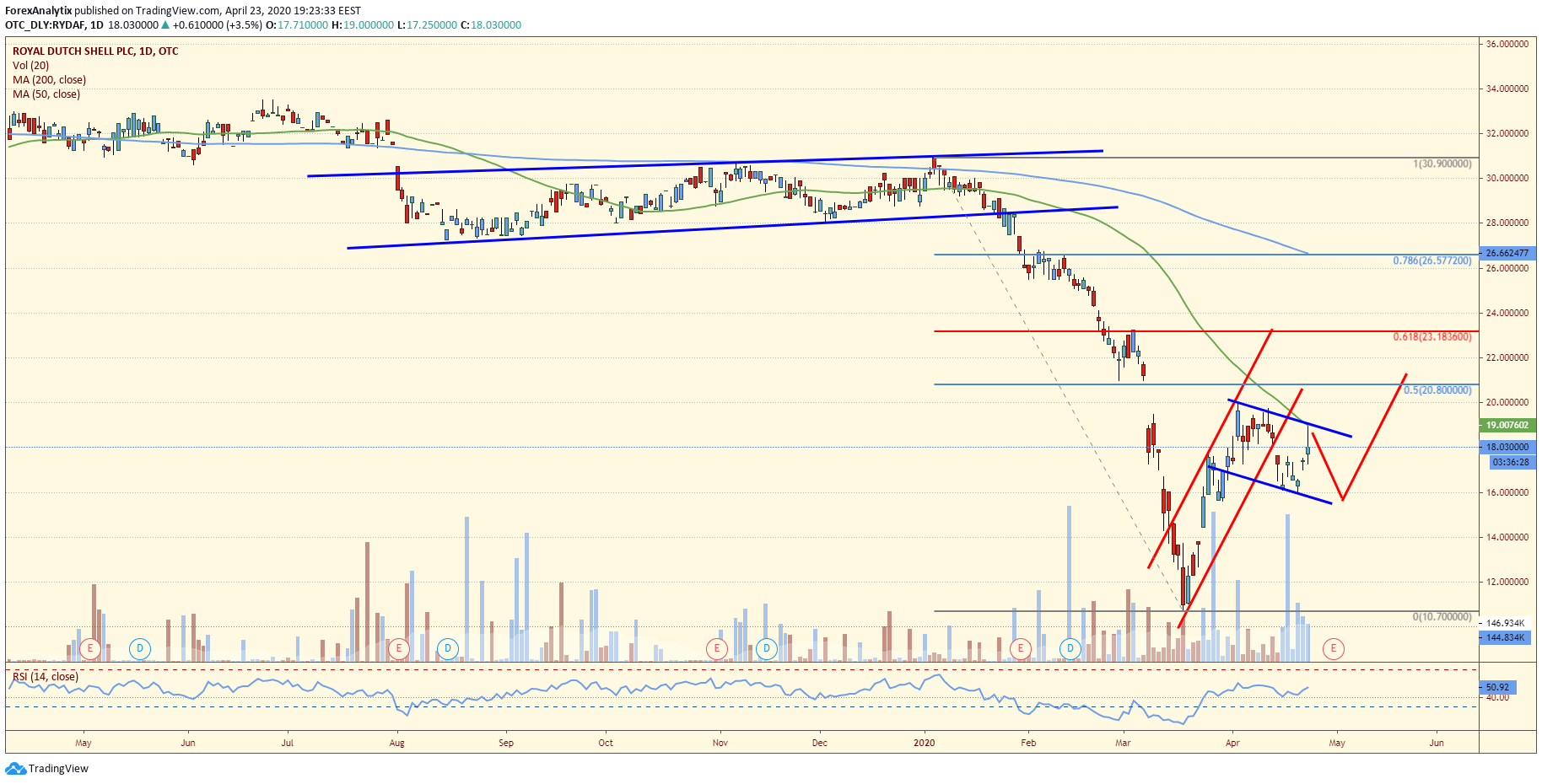 Since 2019, we at ForexAnalytix have been tracking very bearish and incomplete Elliott Wave patterns on crude weekly and monthly charts. We saw room for a decline down from $65-$70 resistance towards $20 per barrel as recovery from 2016 low has clearly been acting as a correction. A drop has materialised much quicker than we thought, which is a good thing as it means that new opportunities for investors may not be far away. We see a price decline to 1998 levels ideally with fifth wave that can be final part of a corrective A-B-C structure from 2008 highs. We have all needed sub-waves to complete this downtrend soon, the only thing that is still missing is a bounce in five waves on a lower time frames to confirm a potential reversal, even if just temporary. A rise in five waves back above $27 will indicate for more upside, possibly towards the upper side of a trading channel, near $50. 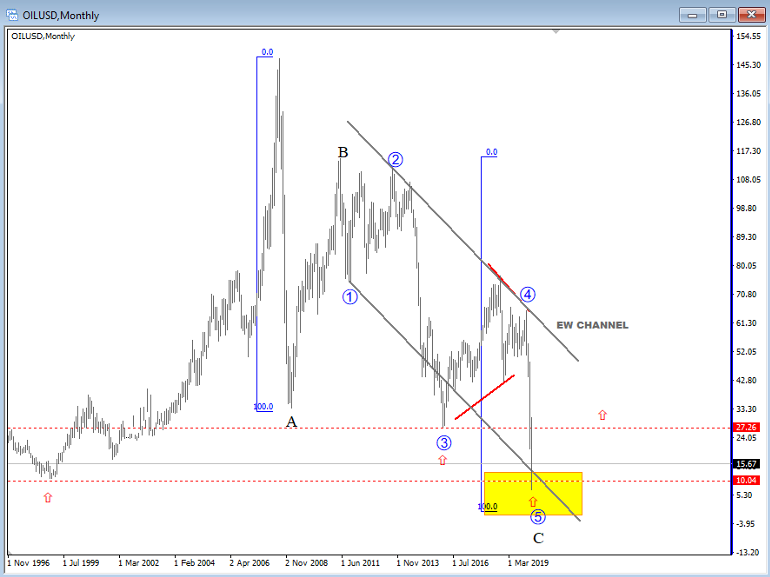 When we search for an advanced pattern formation inside the market, we pay attention to a very specific conjunction of Fibonacci variables which allow us to identify the potential reversal price levels. Usually those levels will offer us the best risk/reward opportunities to engage the market for a potential reversal of the most recent trend or momentum.

Crude oil is now trading below the lows from February 2016 printed at 25.754 with a new daily fractal support forged at 11.104 and a new resistance at 28.218 after printing one head and shoulders above the weekly and monthly support levels, positioned between 49.313 and 50.479 respectively.

By default and as soon the market confirms/validates the pattern, we should target the 200% fib extension from the range between the head to the neck/support zone, in this case with default projections for the pattern around 15.795.

One bullish crab pattern was formed at 161.8% fib extension converging with the default head and shoulders projection price zone now reinforced by the most recent daily fractal as support at 11.104, and we should not ignore the eventual bounce from this price zone with default targets for the pattern back to 36.255 – the 38% fib retracement.

The failure of the pattern will increase the probability for more downside momentum for Crude and one major bullish Crab pattern may emerge at negative territory around -18.503. 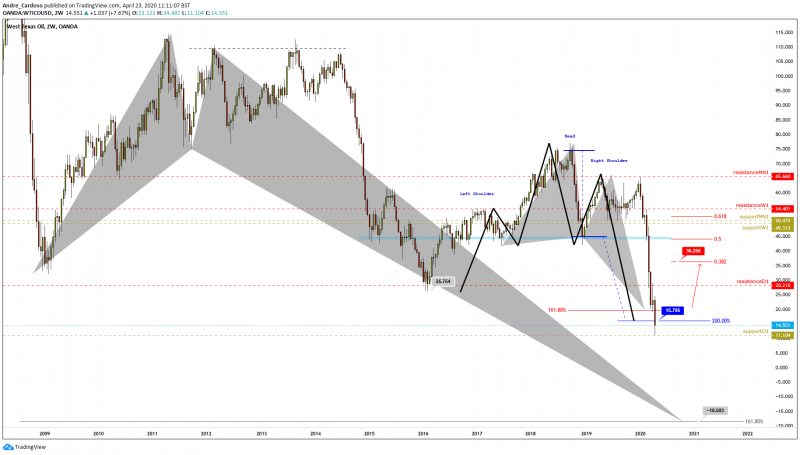