JPY crosses: Where to now?

You are here: Home / JPY crosses: Where to now?

The Yen has been consolidating in price since 2016, following two major moves since the global financial crisis. The 4-year bear move from 2008 till 2012 saw the USDJPY drop from 123 to roughly 75, nearly 40% lower. However, that move was reversed in practically a mirror image trajectory from 2012 to 2016. It’s now trading within the 100-125 channel and moving in line with economic developments in both Japan and the US.

The Japanese economy is showing some slight signs of improvement after a slump that has lasted for over a decade. GDP growth over the past year has averaged 0.4% per quarter, trade balance remains positive and unemployment is still just below 3% – even with a steady increase in labour force participation rate. These are all decent underlying measures but it’s not all good news. Arguably the most important economic indicator – inflation – has averaged 0.5% YoY. This remains at very low levels and nowhere near the central bank’s 2% target.

As a result, the BoJ’s monetary policy remains accommodative and Kuroda, the central bank chief, maintains a dovish stance. The BoJ seems determined to keep the Yen from appreciating, thus boosting Japanese exports and also stoking some currency-led inflation. However, Kuroda’s continued dovish rhetoric doesn’t seem to be having much of an effect in 2017; in fact the Yen has strengthened this year against most majors.

From a macro standpoint we think that putting aside short-term noise (led by technicals, sentiment and positioning) the underlying fundamentals should eventually catch up. Monetary policy divergence should bring some weakness to the JPY and thus XXXJPY pairs are most likely heading higher. 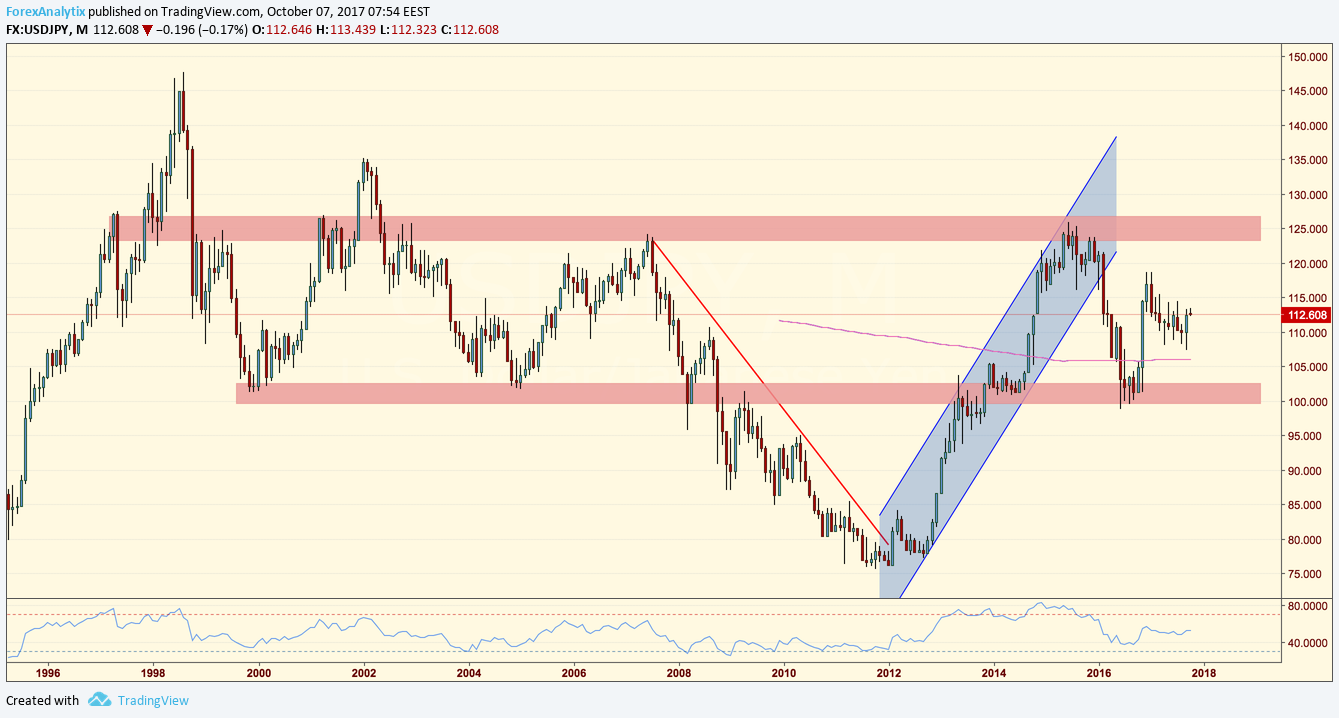 The USDJPY has been consolidating during the past month after a strong push higher from the 107.32 lows in a formation that is more likely than not a triangle. Today it is finally pushing higher and the next area of resistance is at 114.50 (the July high). At the same time several other JPY pairs that we are tracking are either breaking or about to break their consolidation patterns (also to the upside). 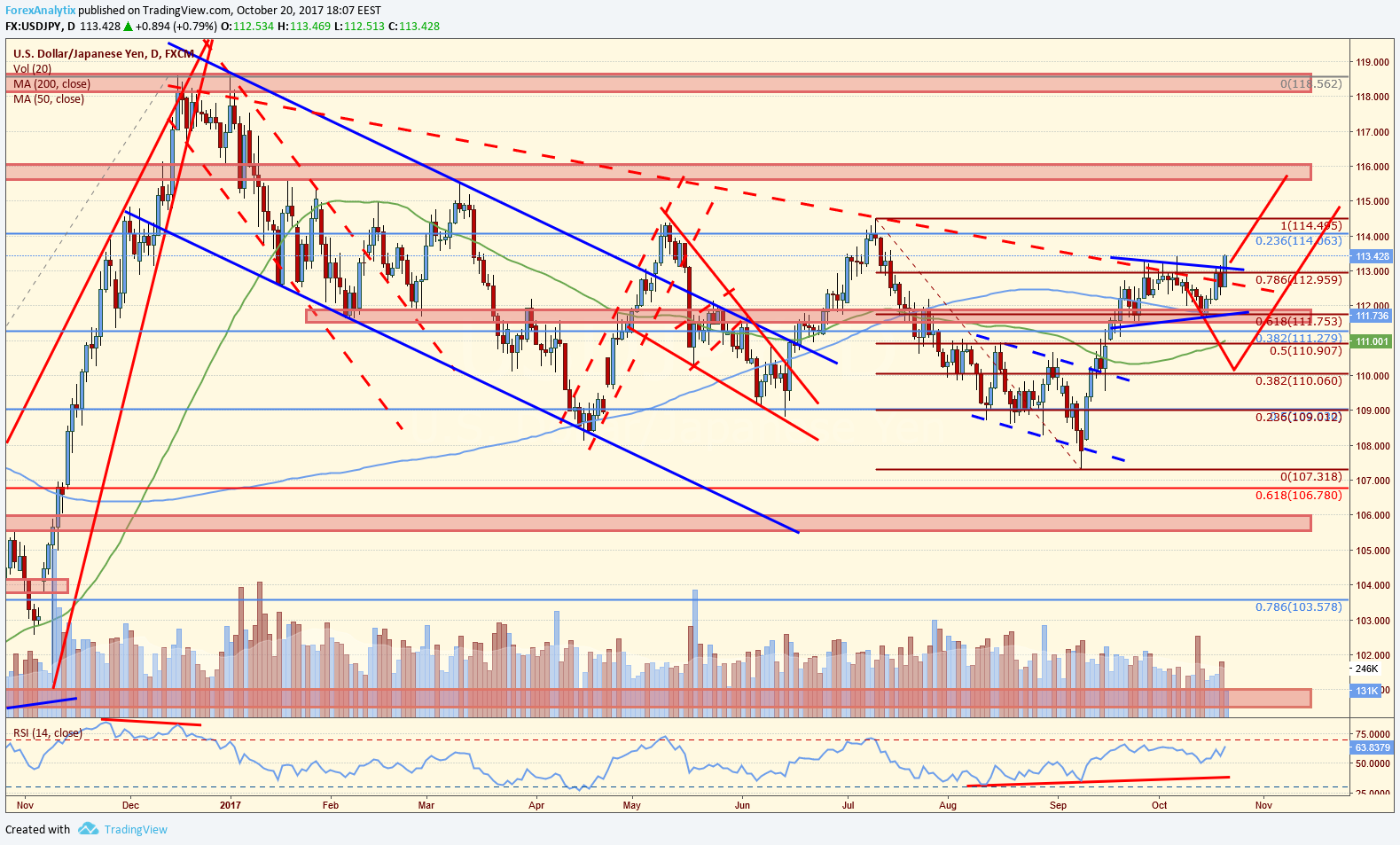 The EURJPY has been in a clear uptrend since June 2016 and after a 5 week consolidation (once again in the form of a flat bottom triangle) it is making a move to close higher tonight. That should extend the trend pushing to fresh multi- year highs. A break below 131.70 invalidates this view. 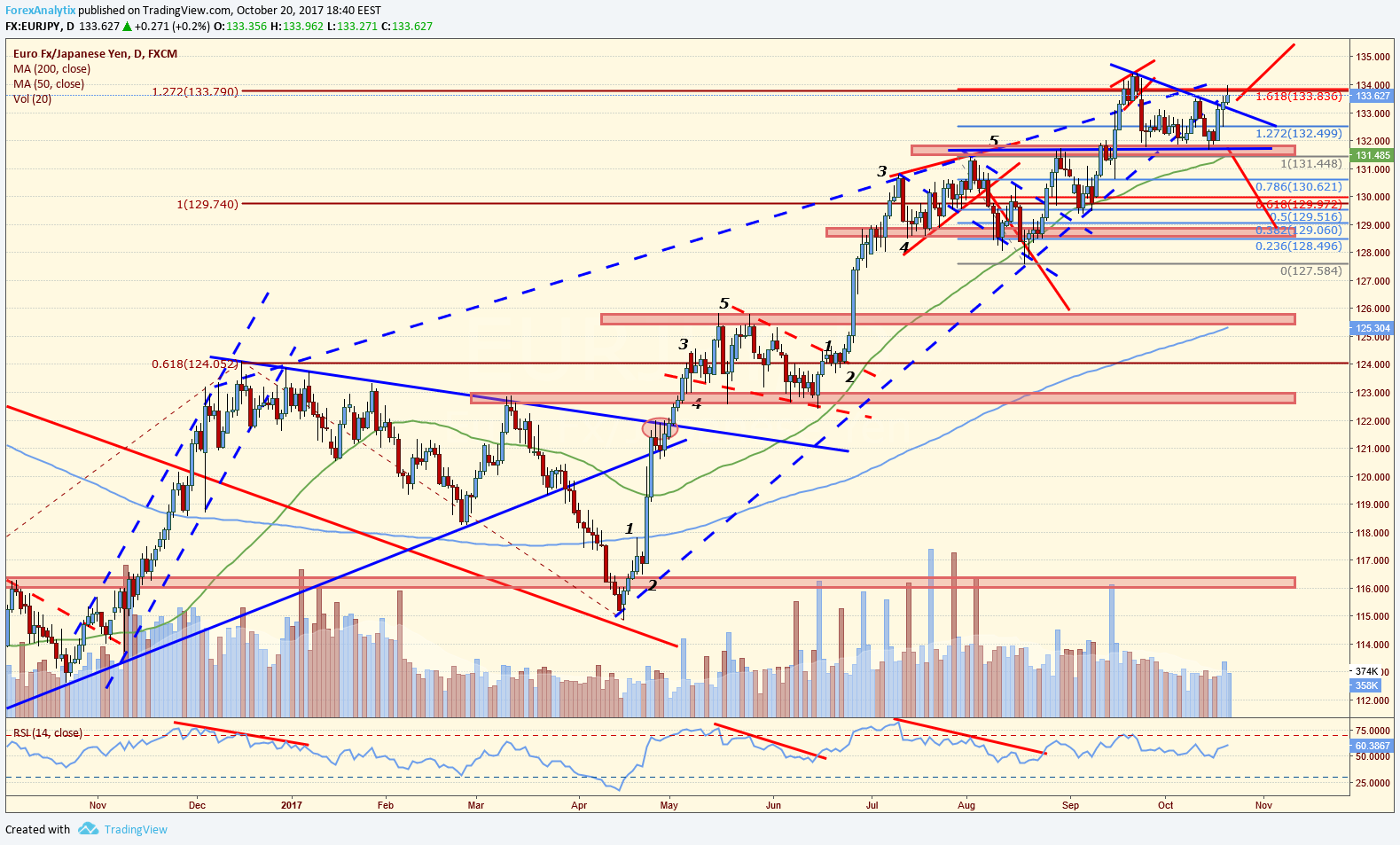 The GBPJPY has at the moment one of the “cleanest” bullish technical setup of all the JPY pairs. After trading within a triangle for several months and breaking finally above it (148) it corrected lower within a channel to retest the breakout area and rebound from there. There are no “absolutes” in trading but statistically speaking, such a behavior should lead to a push to fresh highs above 153. 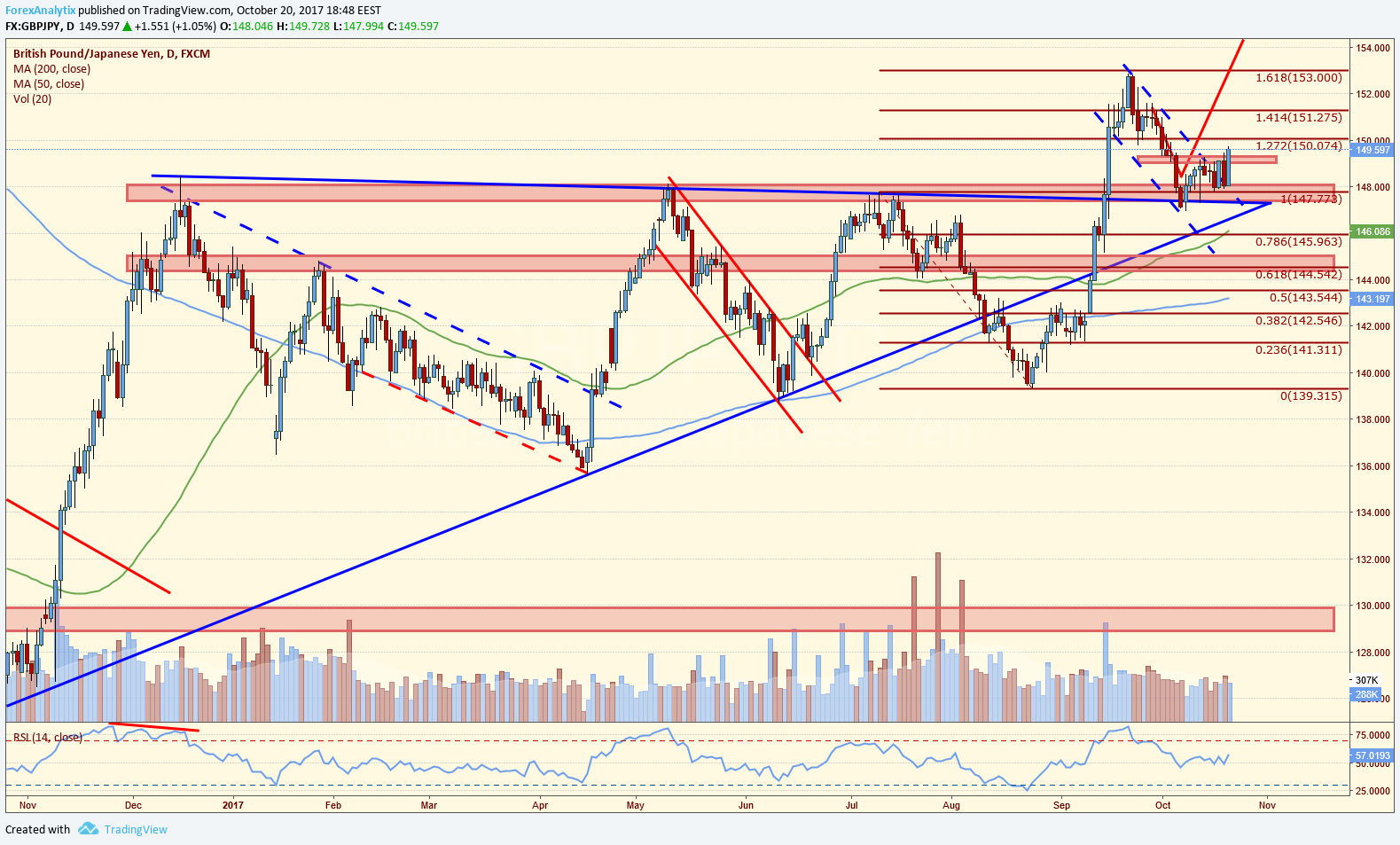 The AUDJPY has been trading within a L/T ascending triangle but if we have a look at the S/T price action we will notice that it is breaking above a descending channel. As long as it holds above 87 a move towards the triangle’s resistance (currently above 90.50) is likely. 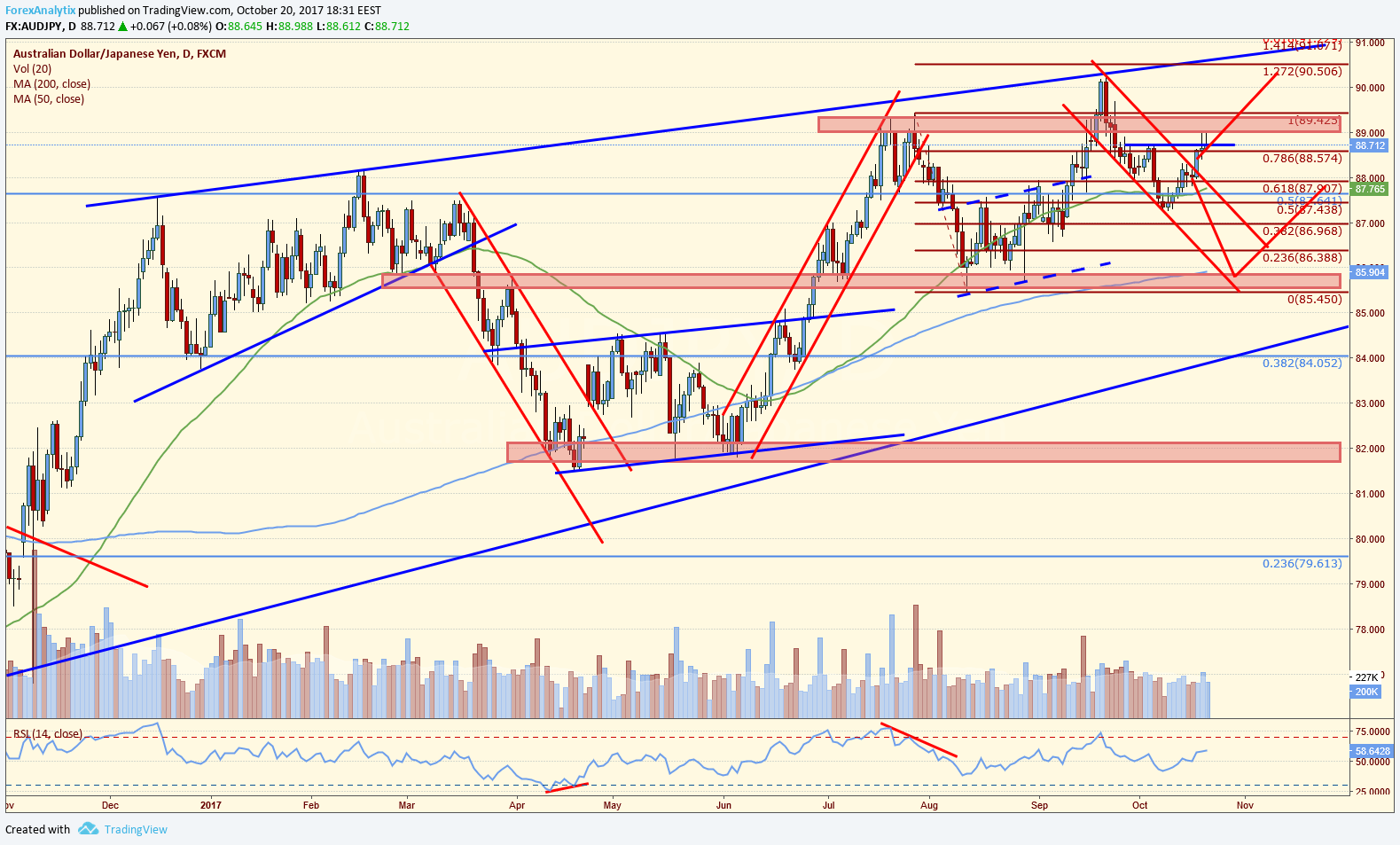 The CADJPY has broken above a huge inverted H&S formation (see the weekly chart) and is currently consolidating within a descending channel, likely a bull flag (see the daily chart). A daily close above 90.90 will confirm the technical break and point to a continuation in the direction of the trend (higher). 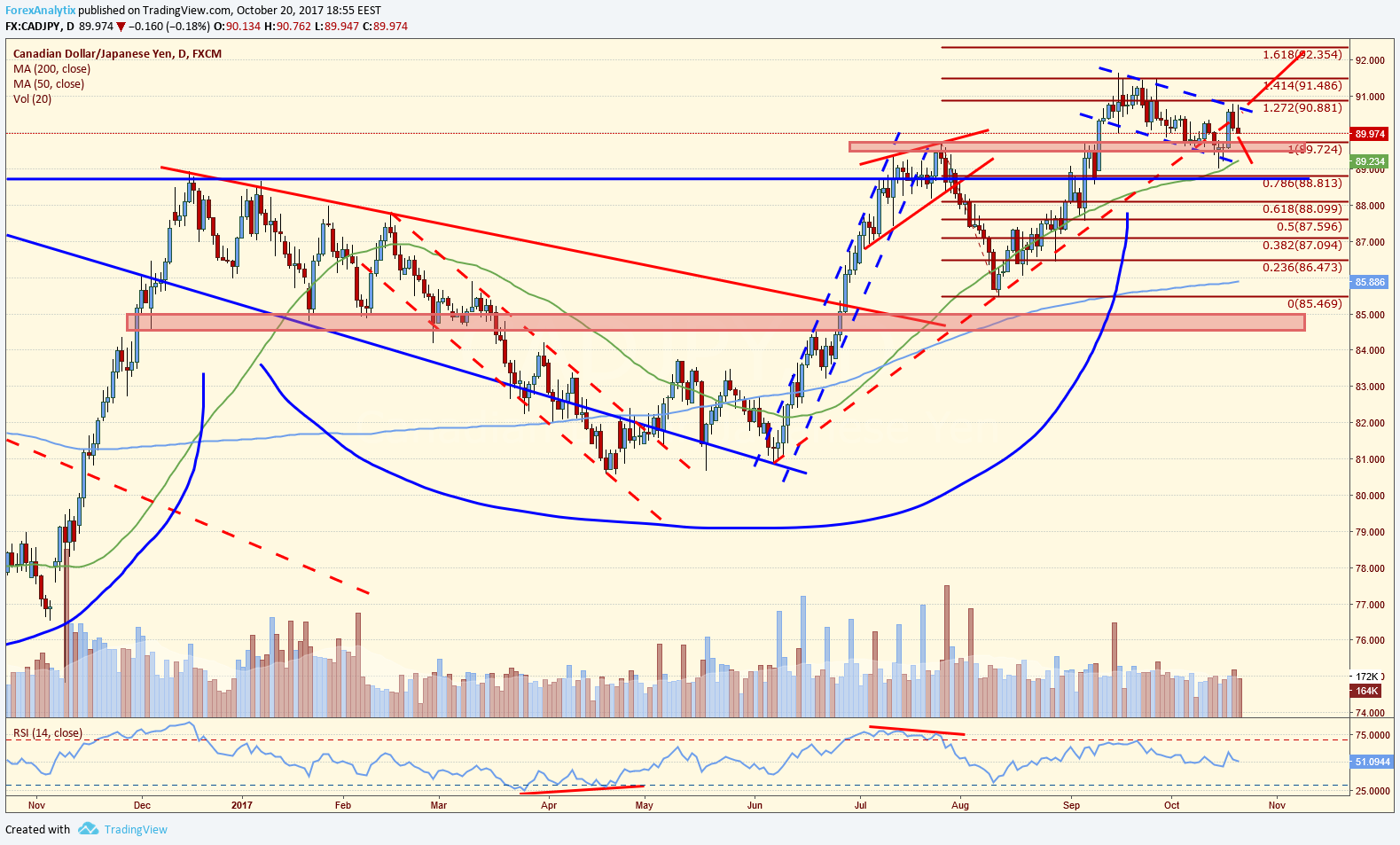 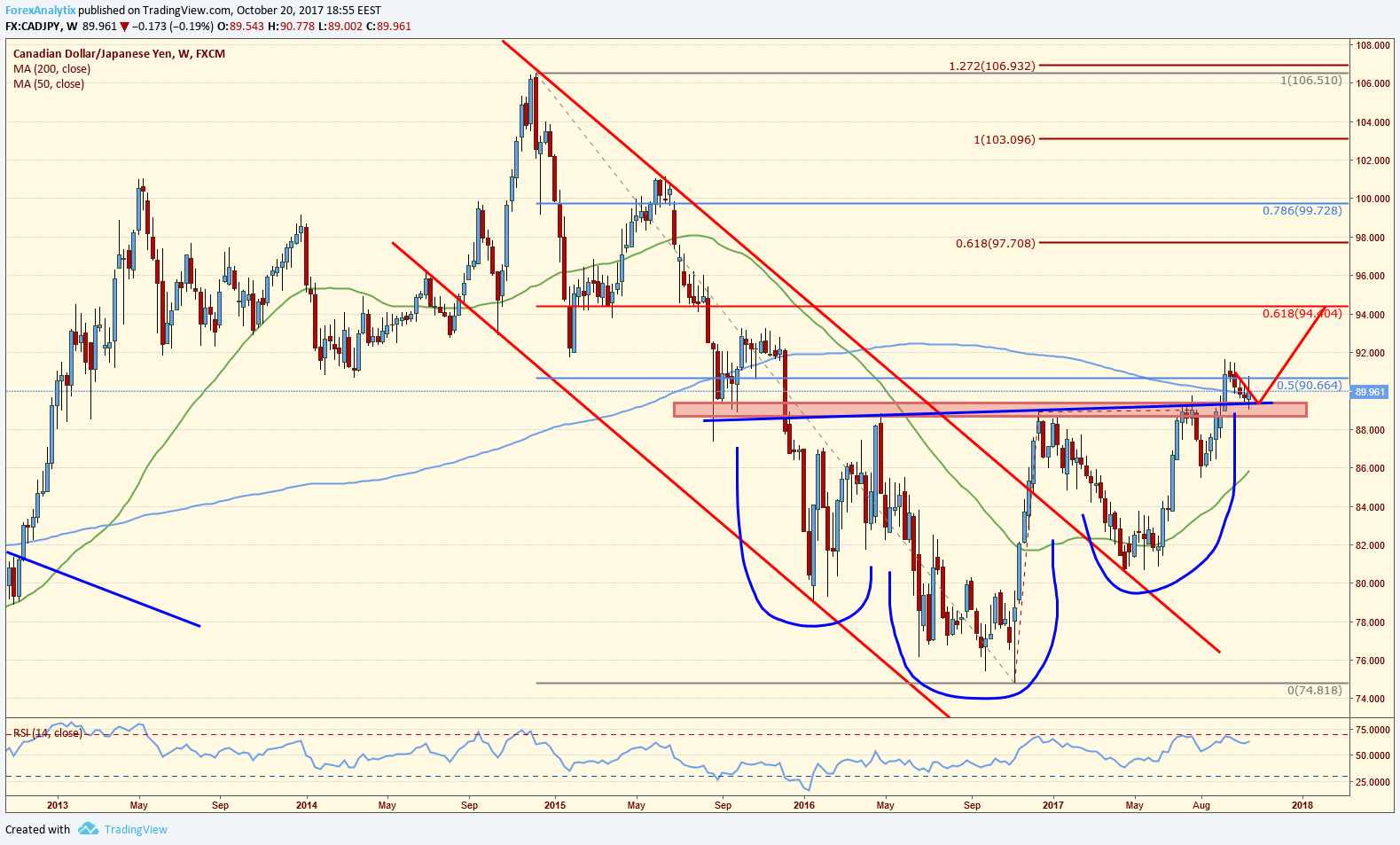 Since 2015 when we saw a USDJPY drop down to the 100 psychological level, prices have not given us any clear directional moves. We see a big ongoing trading range which looks like a consolidation; probably a triangle pattern if we consider contracting lines when connecting swing highs and lows. Triangles are five wave patterns, an A-B-C-D-E consolidation which is not over yet in the case of USDJPY based on current price data. There is however a bullish momentum in play at the moment, but it may be only temporary rise for wave D towards the upper side of a trading range, so be aware of a limited upside as wave E turn is still needed to complete the pattern. Ideally the pair will find resistance by the year-end around 115-117 area so despite limited upside there is still room for 200-300 pip rally. This may also resume if the 10 year US notes will continue to weaken, while stocks remain in risk-on mode. With short-term bullish trend on USDJPY, there are also other pairs that can stay elevated as well. AUDJPY is one example; looking up for a fifth wave towards 91.00, before the pair can see a shift of trend.

EUR Pairs Heavy or at Resistance
Scroll to top