Crude Oil reversed lower from key level. What should we expect going forward?

You are here: Home / Crude Oil reversed lower from key level. What should we expect going f...

A few words about Macro.

Crude Oil is quite a peculiar instrument to trade, given that its supply side has been managed for decades. If we look at a multi-year chart, there was a very evident move which happened in 2014. The drop from over $100 to $40 was very sharp and relentless, and it was driven mostly by the new fracking technology. Fracking proved to be the tipping point for oil, bringing in substantial new supply as global demand declined. 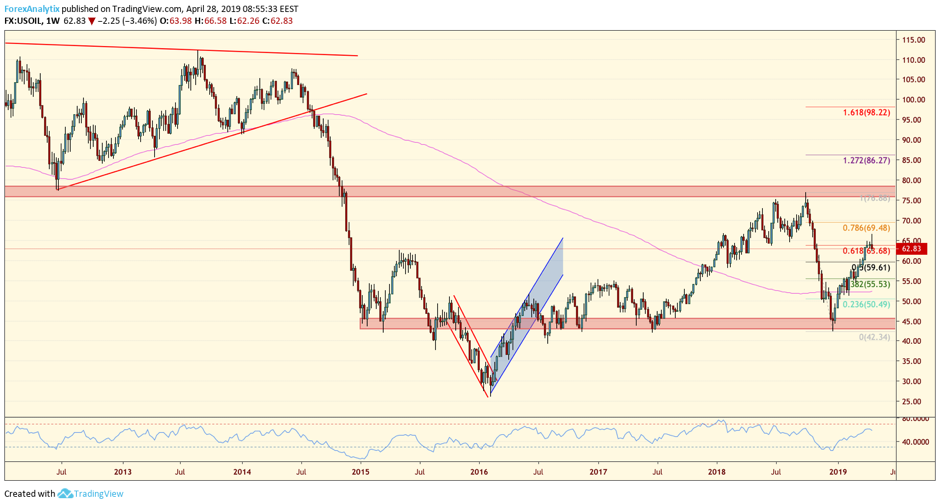 Since 2015, crude has been trading within a big channel spanning from around $45 to just over $70 per barrel. There was a brief foray towards the $30 area, but the quick V-shape recovery suggests that this was not a supply / demand issue, but rather a comprehensive stop run.

For over two and a half years, crude remained at around $50 per barrel, and this meant that shale oil producers couldn’t compete with OPEC producers; their extraction costs are still much higher than traditional oil producers, and hence cannot withstand prolonged low prices. US rig counts dropped as a result, and decreased supply inevitably meant that a slow grind higher would ensue. We have had two major legs higher since mid-2017, the first of which was strong and managed to reach the $70 resistance zone. The second and most recent leg touched $65 but then turned lower last week.

So, what’s next for oil from here? Unless there is a major change in the supply side (the fight between OPEC and shale seems balanced for now), then the big horizontal channel should still be respected. There is always the danger for black-swan events to provide sharp price spikes to the upside, but for now the driving force will probably remain the global economy performance.

Many of the world’s major economies are starting to look fragile. Trade wars are being waged, mostly led by the United States. There is political uncertainty brewing in Europe and Brexit is still a big question mark. Oil may well test the $70 resistance within the next couple of years but on a macro level, a foray towards the low end of the channel is probably the higher probability scenario from here.

The daily viewers of our FACE webinars know that our team was looking for a reversal lower in crude anywhere between $64 and $66. The initial rejection from $64 failed to produced follow-through and the horizontal consolidation provided clear signs that another thrust higher towards $66 was imminent. That level was indeed hit but soon after we got the expected reaction from there we got a break below previous resistance at $64.5 the acceleration lower was to be expected.

Now that the week has come to a close there are 2 technical facts to consider:

a) Crude closed right on a 5 month ascending channel’s support.

b) Crude posted a key reversal shooting star on the weekly chart. 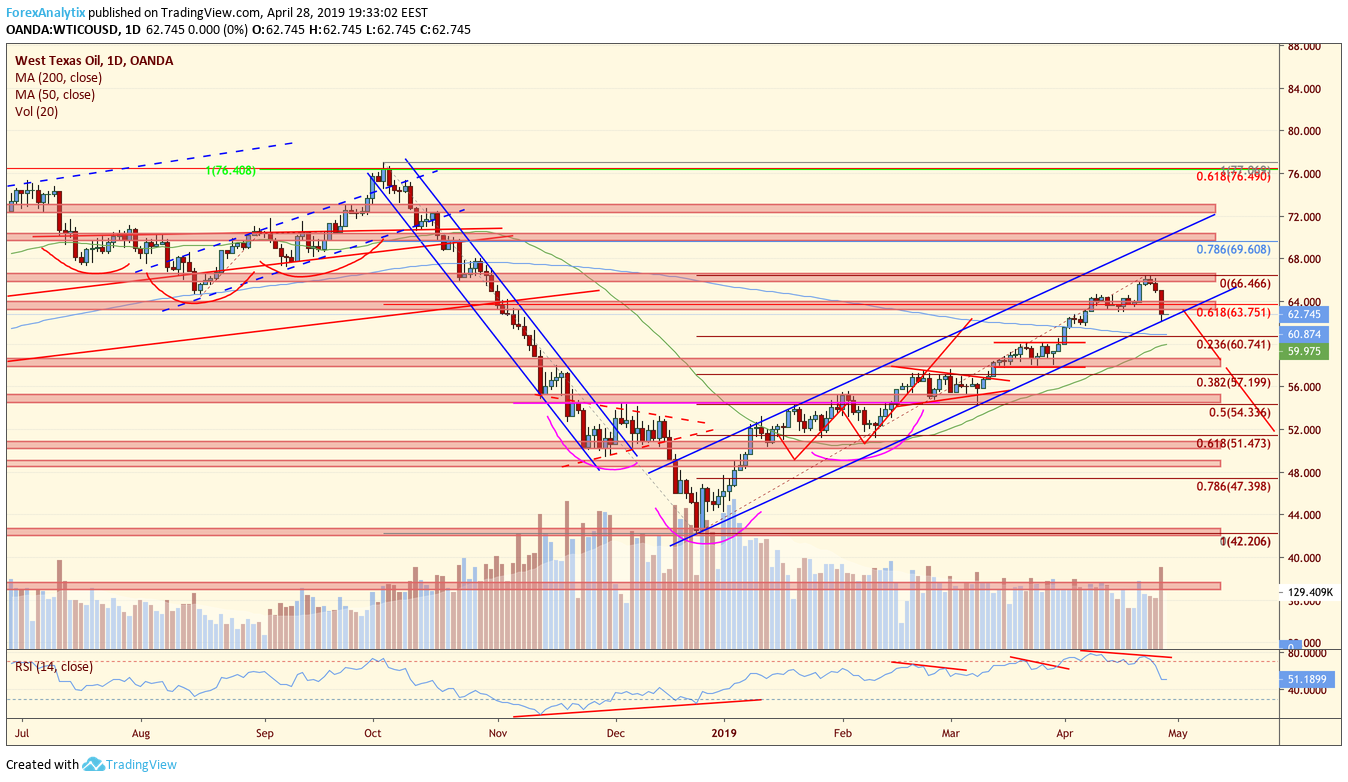 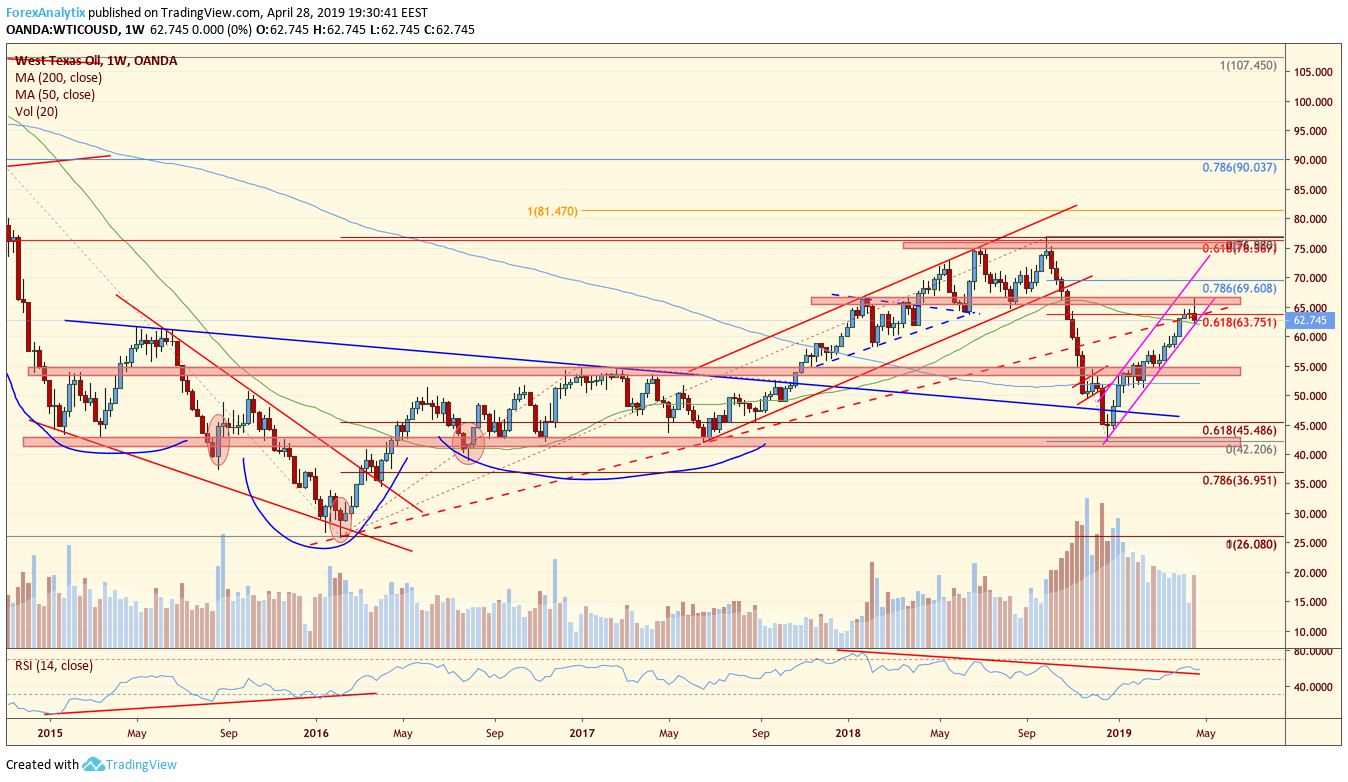 What happens from here? A move below the channel and $62 opens the next D/S target which is the confluence of supports at $60.70 (200DMA and 23.6%Fib) and after that the horizontal support area just above $58. Most importantly we are going to be -after a long time- in sell the rally mode instead of buy the dip mode. Any rebound towards $64.50 will be a great R/R selling opportunity with a stop above the highs.