Bitcoin, the future or just a gamble? (2)

Does the break above the psychological $10,000 level, validate the Cryptocurrency?

This week we saw Bitcoin breach the $10,000 mark and continue in a near-vertical ascent that has some people scratching their heads and others celebrating their incredible gains. We’ve covered Bitcoin in January 2017 (link: http://www.forexanalytix.com/bitcoin-future-just-gamble) and many of the fundamental points covered are still valid. We tackled supply and security – two of the main issues – and the associated arguments, so it’s worth revisiting that post for a reminder.

As certain countries in the world experience crises of various types, cryptos and Bitcoin in particular emerge as top choices for protection. There have been considerable flows from countries like Russia and China, where cryptos have been used as a vehicle to take funds out of the banking system and essentially make them vanish. Pretty much from their inception, cryptos have been one of the easiest avenues when it comes to such needs, and also for the dark web (the infamous Silk Road website being a prime example of that). There have also been cases where rampant inflation makes having fiat money a particularly bad carry trade, with obvious examples being countries such as Venezuela and Turkey.

So, there have been good reasons why cryptos have been the target of funds over the past few years and why they have experienced this monster rally. To put some perspective, here is an interesting table of Bitcoin price progression: 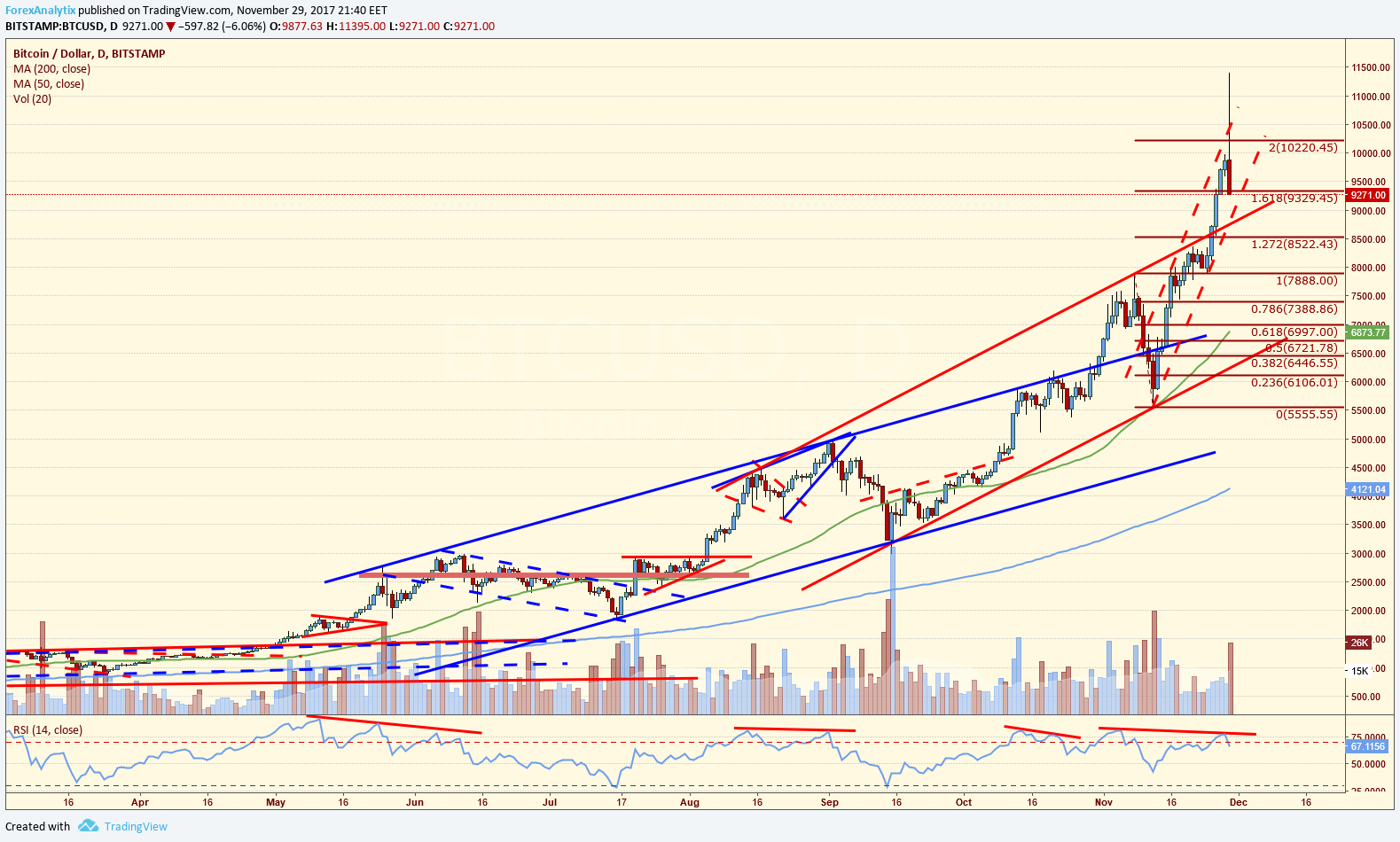 This kind of price action is very rare and as a result there have been varied reactions to it. The disbelievers call Bitcoin a bubble and are adamant that there is no fundamental reason why it’s going parabolic. Bitcoin price action actually resembles the Dutch Tulip mania of the 17th century, and this is something they often refer to in order to justify their negative view. They are usually particularly offended by people saying that “Bitcoin is backed by mathematics” and setting massive arbitrary price targets.

On the other side of the fence we have the hardcore crypto fans who believe that total crypto-currency market capitalisation should be in the tens or even hundreds of trillions of dollars. They think that blockchain technology and cryptos are the future, and that potentially they will eventually replace fiat currencies. They accumulate cryptos (the ultimate goal being to accumulate Bitcoins in particular) and are on a buy-and-hold to infinity mode.

Then there are the people in the middle who are open to the concept of cryptos and understand the value behind the technology, but who also find it very difficult to assign a price to this product. I myself am in this last category; I’ve been watching Bitcoin’s rise in amazement but I never got certain enough of it in order to trade it. I have well and truly missed this trade and I accept that. I personally believe that blockchain technology is here to stay and crypto-currencies could be the future of money. However, I’m still not convinced that the current crypto-currencies are the ones that will survive. As total crypto market capitalisation rises, governments and central banks start to take notice. It’s possible that we will see government-backed cryptos in the future that could well take a big chunk of the total market cap. As a currency, Bitcoin has severe limitations when it comes to transaction capability. The recent hard fork with Bitcoin Cash seems to take care of that problem but it’s still unclear how well it’s equipped to properly take on established fiat currencies.

So, what do I think will happen to crypto prices – and Bitcoin in particular – in the near future? Its price has taken off and is breaking ATHs practically on a daily basis and this is something that I would never want to go against, so I wouldn’t be shorting it here. An interesting development that will affect Bitcoin price is the introduction of Bitcoin futures on the CME. This has been discussed extensively in the marketplace and once again there are two differing opinions on it.

One view is that this is a bearish development, as it will provide an easy way for traders to short it. There are currently ways to short Bitcoin, but they are not as simple as shorting a futures contract. I can see the logic in this, but I personally think that there is a much bigger reason why Bitcoin futures will actually push the price higher:

There have been many individuals who want to invest in Bitcoin but who are put off by the complexity involved, and also by the security risk. You need to get a digital wallet, preferably a physical piece of hardware. Then you need to get very good anti-virus protection and make sure you have backups. Do all that and you could still potentially be vulnerable to hacking. Cases where cryptos are hacked or stolen are multiplying and this is surely putting people off. Bitcoin futures will provide a platform where getting long Bitcoin becomes extremely simple, and for this reason I believe that the initial reaction to the introduction of this future will probably be bullish. It’s my opinion that Bitcoin will continue to rise going into year end, as the CME future gets introduced. However, there will have to be a point where there will be a major correction. Bitcoin price will no longer be subjective and driven purely from capital flow, but it will also have to somehow represent intrinsic value. This is something that Bitcoin longs need to be very careful of, and plan their contingency strategy accordingly.

The Harmonics point of view:

The whole market has been talking about when bitcoin would reach 10,000 but the weekly Fibonacci resistance was at 11400. It is very common in Bitcoin at big levels that the market is expecting to pause just below it or at it and suggest it has stopped going up.
Then longs start to sell and some even short sell and then bitcoin pushes through the level, everyone thinks it is a breakout, jumps in long. And then the market reverses straight back through the level. This is a very bearish reversal signal. Trend support is the 0.236 Fibonacci retrace level from the 2015 low and then below that we are in a bigger correction and can look to 7132 and the 0.382 retrace next. In terms of harmonic patterns we are looking for a three wave (two swings lower) move before we see bitcoin turn higher again. 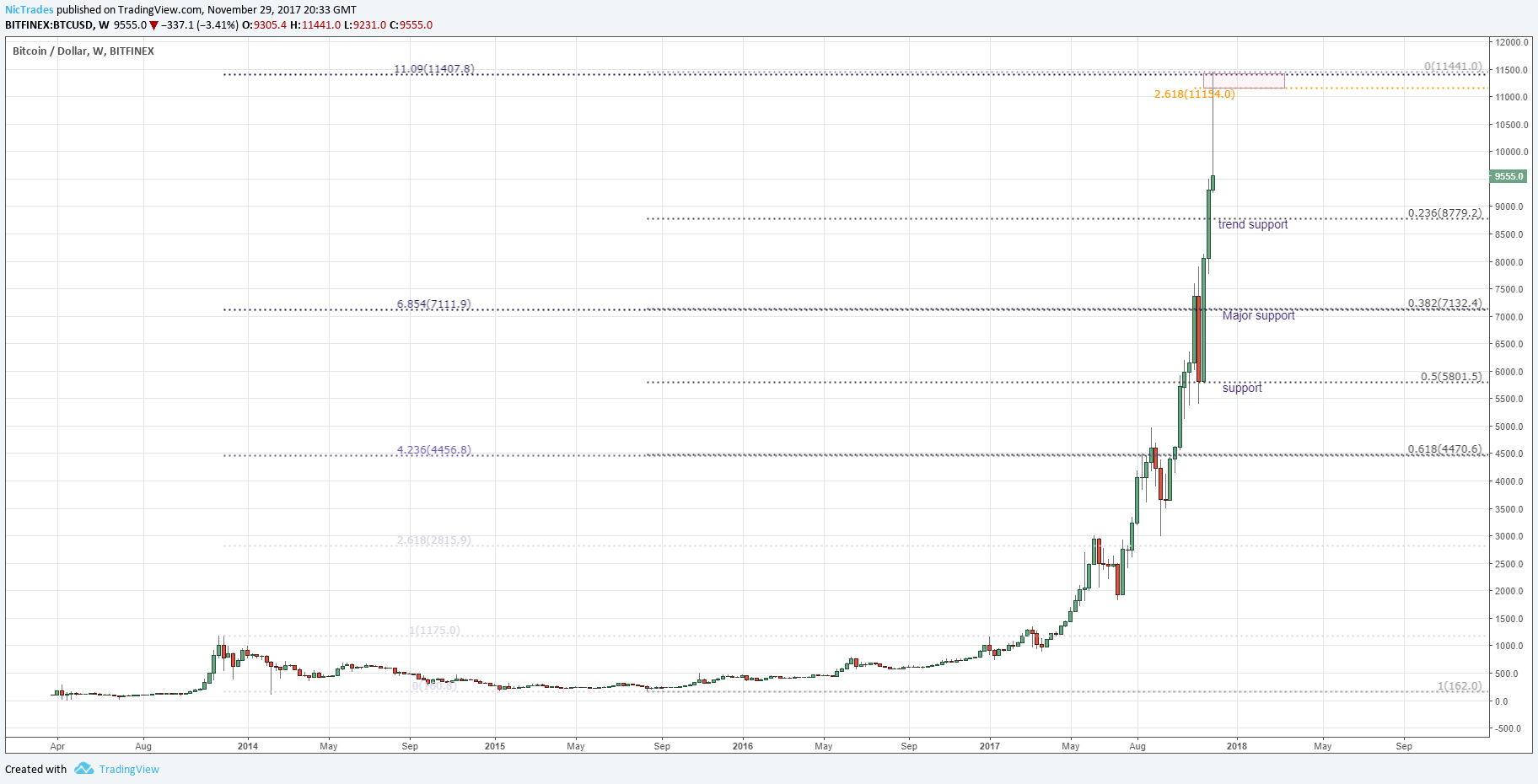 Do USDJPY & the Nikkei tell a different story?