The dollar is in danger of breaking down! - ForexAnalytix - Blog
Click here to open Help

The dollar is in danger of breaking down!

You are here: Home / The dollar is in danger of breaking down!

The fundamentals are changing.

The US Dollar has seen an impressive reversal in the past few sessions, and this can be mostly attributed to the reversal seen within the Fed, over the past months. If we recall, only six months ago, the Fed was in “autopilot” mode: tightening bias and unwinding of the balance sheet. Since then, the Fed’s rhetoric and the market forecasts have changed dramatically.

Was this dovish shift due to a deterioration in economic data? Partly, yes. Although employment data is still relatively robust (unemployment rate at 3.6% and Nonfarm Payroll 3-month rolling average just below +200K), that’s probably the only bright spot within the gathering clouds. The Fed’s favourite measure of inflation – Core PCE – remains below target at 1.6%. Furthermore, PMI and housing data continue to disappoint. Finally, forward GDP estimates are constantly dropping.

Was the Fed’s dovish shift also due to President Trump’s pressure? Well, theoretically the President should have no influence over the Federal Reserve, but things often differ between theory and practice.

We saw Fed members become progressively more dovish, and today James Bullard gave a pretty clear sign that rate cuts are coming sooner rather than later. The market has been pricing rate cuts for some time now, but after today’s big rates move (yields dropping), we have stretched to price between three and four 25bp cuts by the end of 2020. The yield curve is well and truly inverted, with the difference between the overnight rate and the 10-year yield hitting -40bps.

Is that too much, too quickly? In my opinion that’s a very plausible scenario. However, I feel that we could be facing a binary scenario: The Fed will either not cut at all, or they will need to cut a lot more, in order to fend off another 2008-like global crisis.

While the DXY is testing major support!

The double top in the US Dollar index is testing the neckline which is very important support at the 97.00 level for a few reasons. First, it is the neckline and horizontal support. Second, it is the 38% retracement of the 2009 low to high. Lastly, a break of this level would mean a move below the long term trend line support and target well below the 96.00 level. This would create a lot of selling all the way down due to the important levels being breached, including the 200DMA. 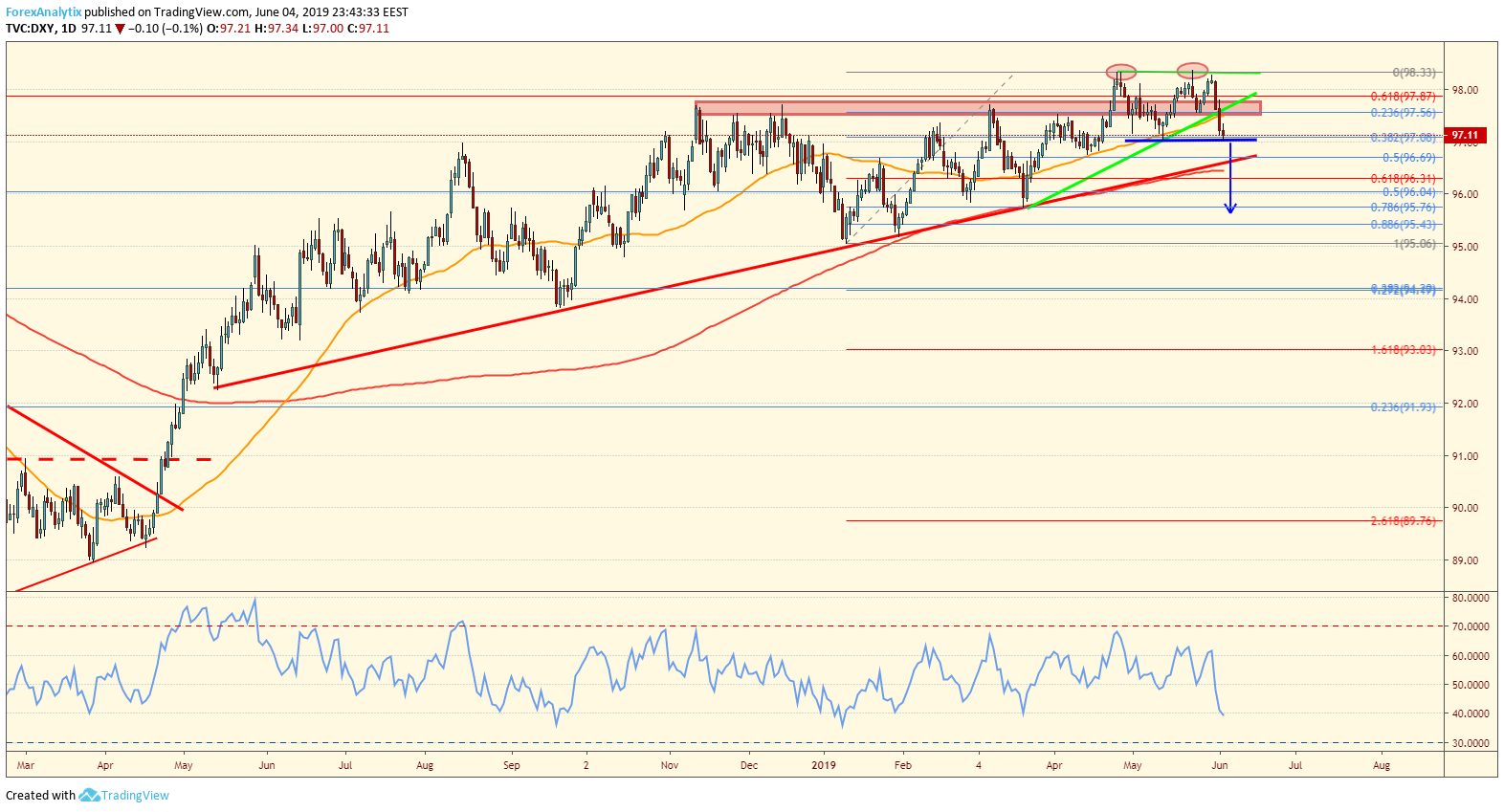 And the major dollar pairs are at key junctures.

There are several major pairs that are either currently breaking out against the dollar or are close to producing such a technical event. Below we are going to briefly go over a few of them.

The USDJPY is on the precipise of a major breakdown since it isprobing the area below the support of a multi-year symmetrical triangle. A break below the 61.8% Fib and the 107.61 area will confirm such a technical event and open up much lower targets. 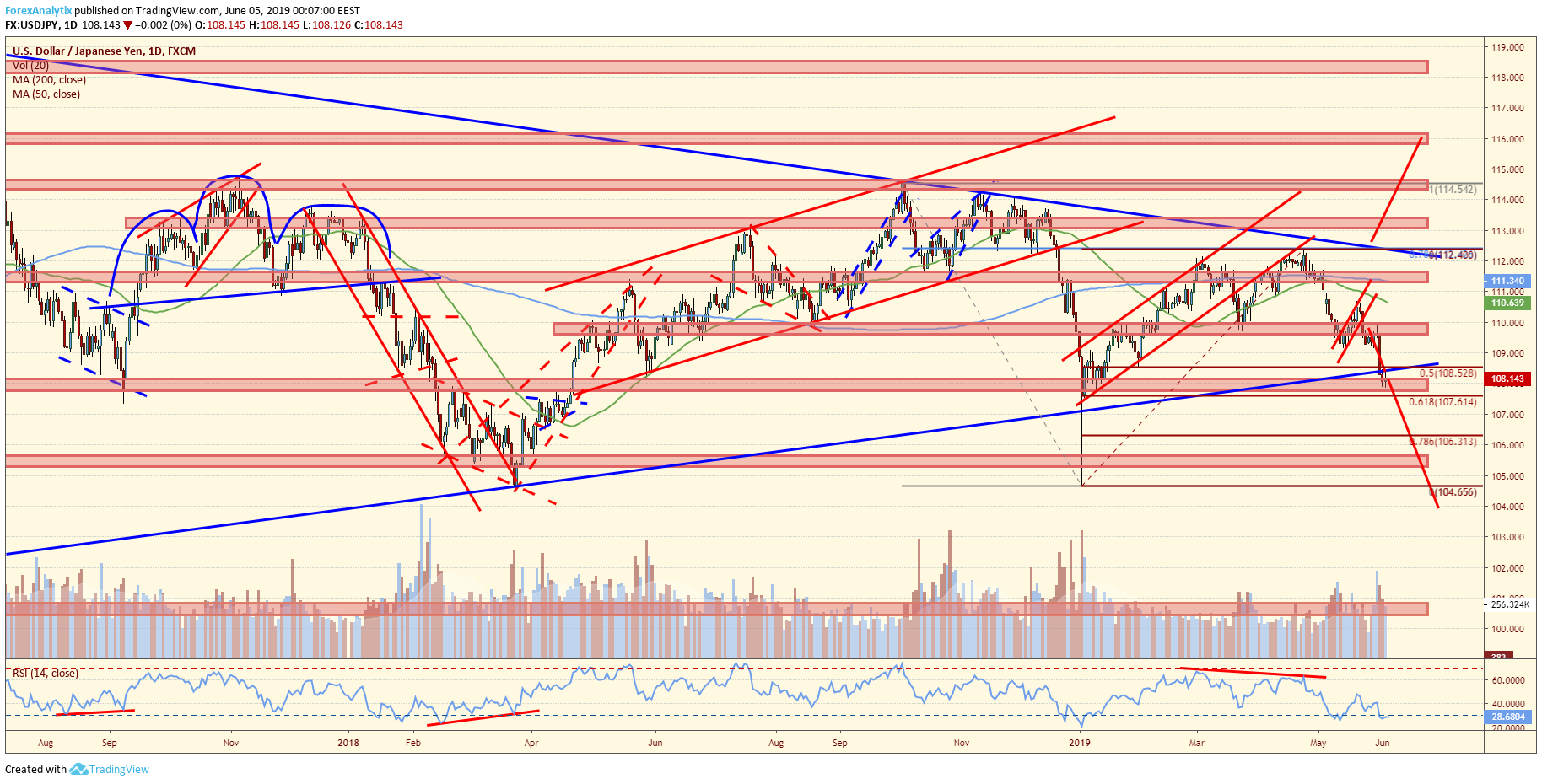 The USDCHF in an equivalent fashion is testing the T/L support of an 18 month old ascending wedge. A break below parity opens up the D/S and should accelerate the pair’s losses. 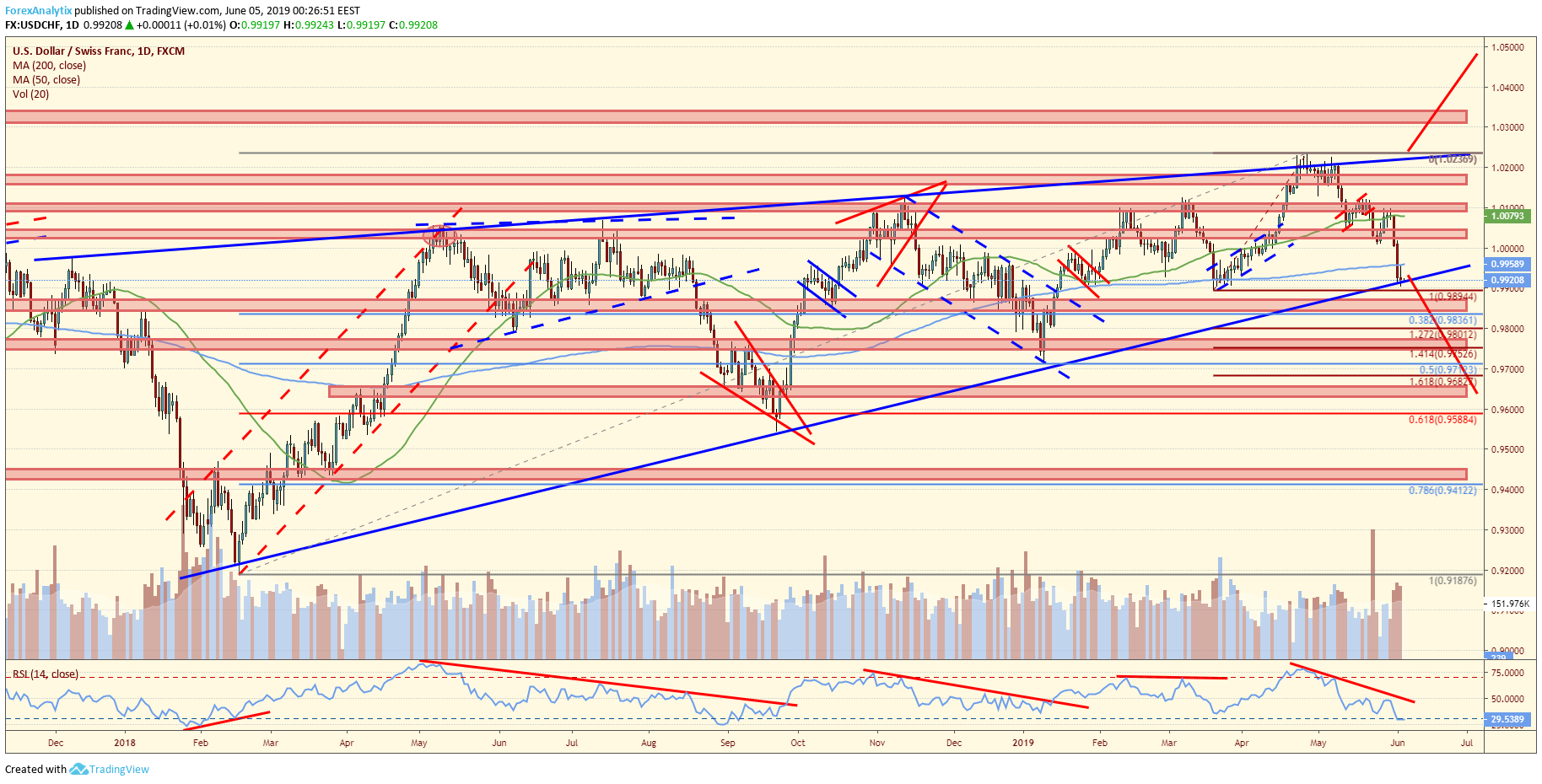 The EURUSD is attempting to break above a 10 month descending wedge. A breach of the 1.13 resistance area will confirm and point to further gains. Keep in mind that by definition wedges are expected to retrace 100% of the formation ,which in this case would point to a move back to 1.18! 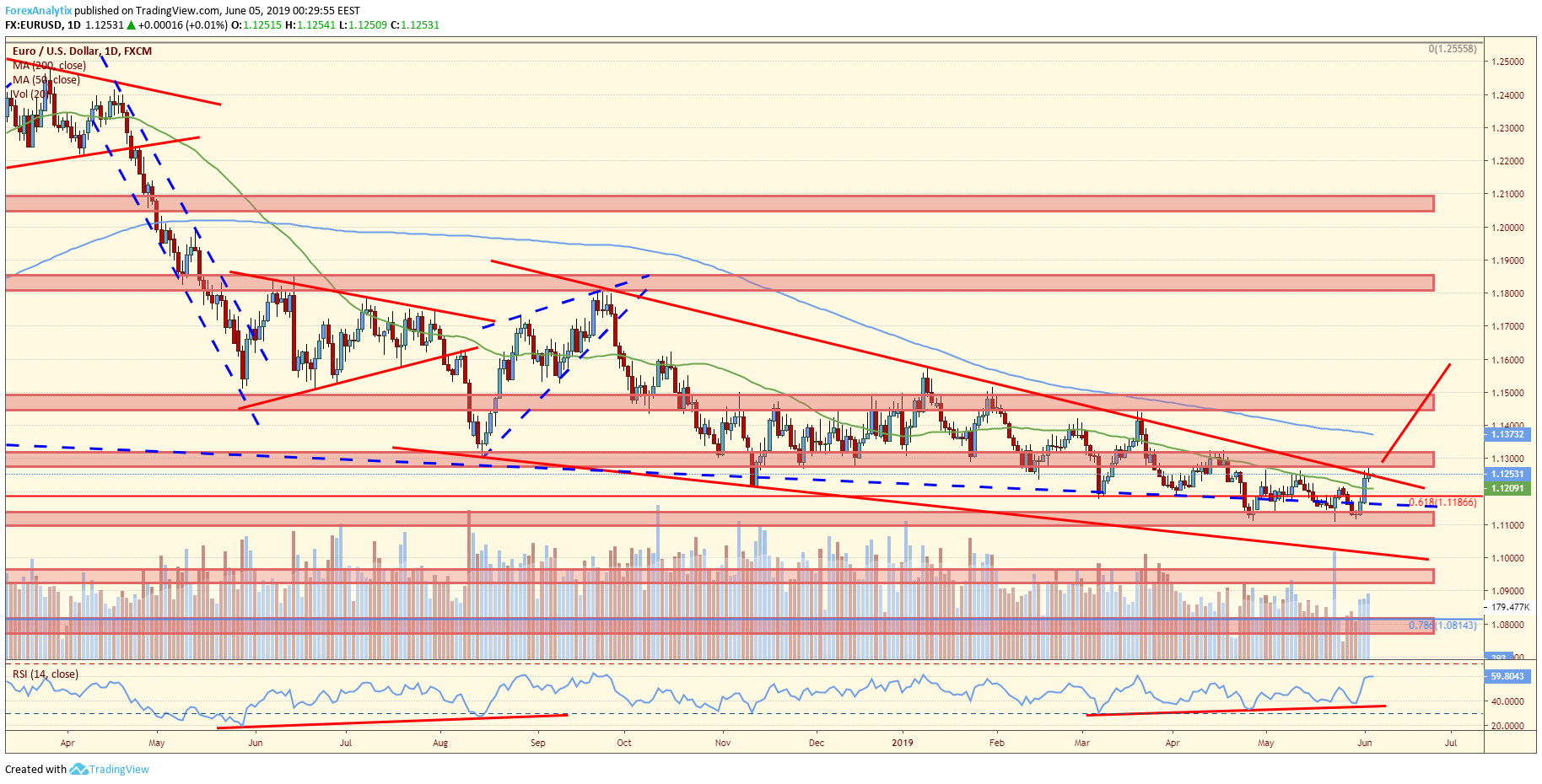 The Kiwi is one of the fist dollar pairs that made a move having already broken above a descending wedge 2 weeks ago. The next upside resistance is at 0.67 and a move past that should accelerate its gains. 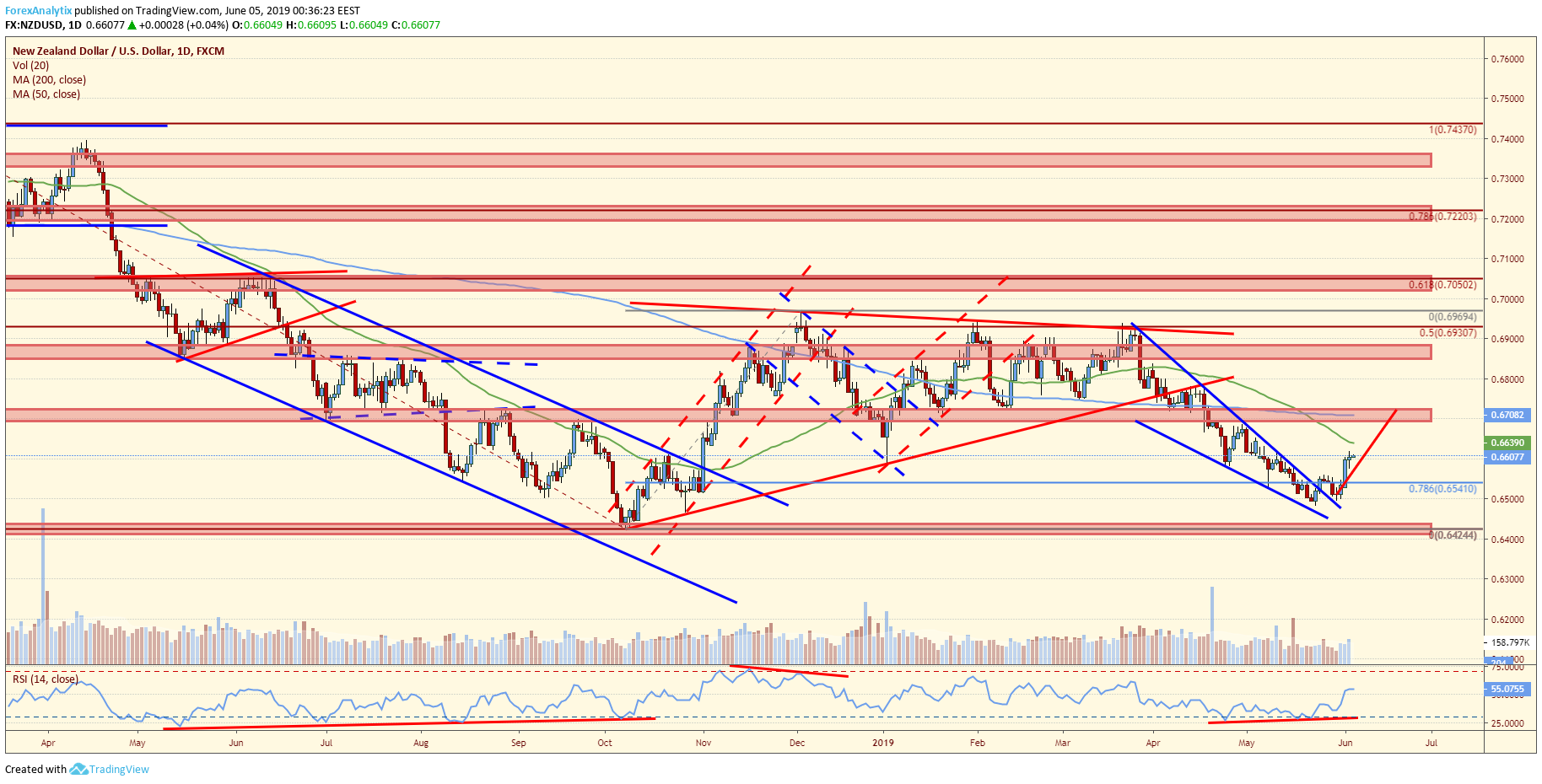