You are here: Home / Gold breaks higher after 6 years of consolidation

Gold finally broke out higher from multi-year resistance, and that has certainly caught the market’s attention. Attempts have been made to explain this move, but what are really the factors that move Gold – both in the short term as well as the long term?

Gold was a monetary metal for centuries, being broadly used due to its scarcity and its divisibility. It was also very popular for jewellery and in recent times it’s also had some – albeit limited – industrial use. The supply and demand of Gold has been relatively stable since the abolishment of the Gold Standard in the early ‘70s. In August 1971, the $35 per ounce convertibility was abandoned, and this was the start of the massive government balance sheet expansion that followed. Debt and credit continued to expand at unprecedented levels and while gold extraction also rose, the rate of increase was marginal. Demand in industry and jewellery also rose, and most of the world’s central banks remained net buyers of gold. Russia and China in particular have been aggressively buying bullion and are constantly increasing their reserves.

Pundits always refer to the usual suspects when it comes to justifying Gold moves:

There is a strong inverse correlation between the US Dollar and Gold. As the Dollar drops, Gold rallies, and vice versa. Commentators were quick to attribute Gold’s breakout to a general Dollar weakness. That may be one of the reasons, but it’s certainly a short-term correlation. If we overlay Gold and the DXY index, we can see that the correlation is strong in the short term: 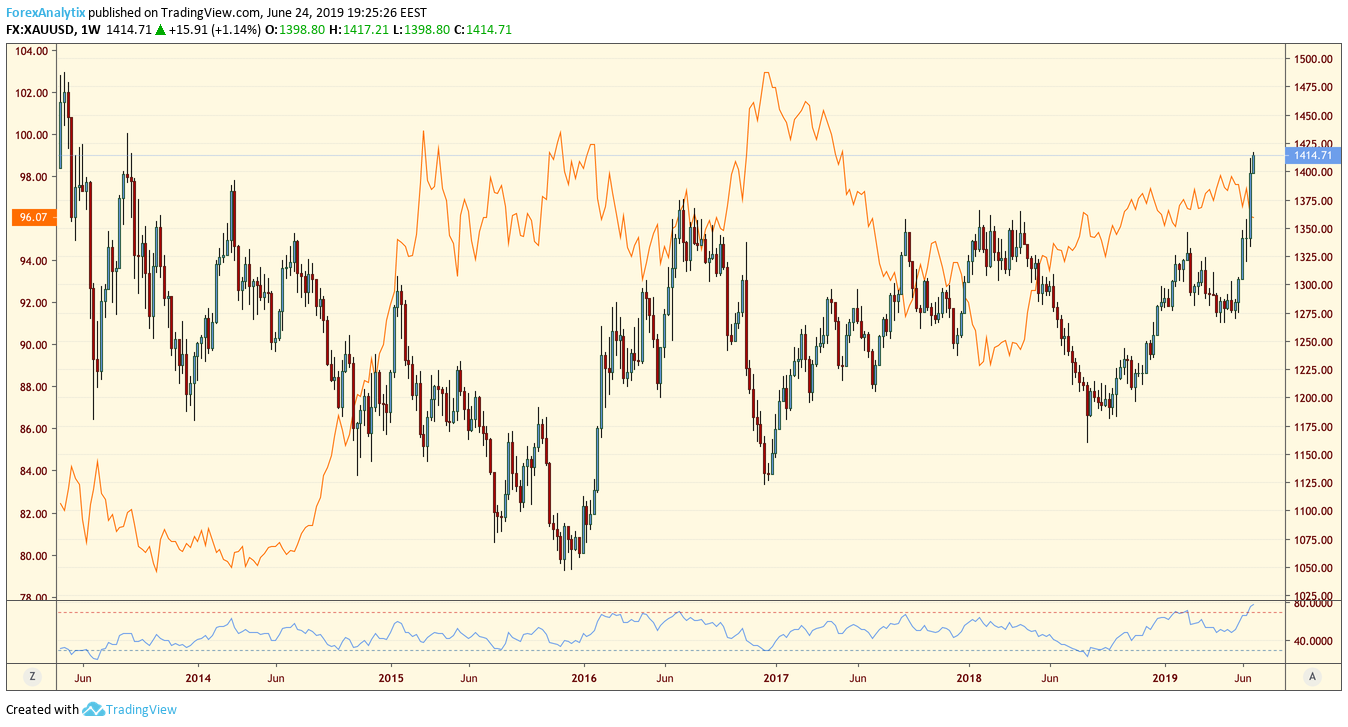 However, if we look at a multi-decade chart, the picture tells a different story:

From the 1970s and on, Gold’s price has been a quasi-parabolic rise, with two distinct peaks in 1980 and 2010. It’s a similar story with interest rates: real rates (i.e. interest rates adjusted for inflation) have a good short-term correlation with Gold, but in the long term the relationship is not that convincing.

Finally, geopolitical uncertainty is another explanation that’s been adopted for Gold’s breakout higher. It’s true that during periods of political / military turmoil, or during times of distress, risk assets are sold and “safe haven” assets are sought. Gold has always been a recipient of safe haven flows, and the current environment certainly justifies a shift to precious metals.

In our April 2018 blog post on precious metals, I concluded that “…global geopolitical developments must be closely observed because any further escalation can easily produce an upward price breakout.” I also said that “…the macro picture is a positive one, due to increased demand, a faltering US Dollar and rising geopolitical tensions which should maintain positive price pressures”. On a macro level, I stand firm with the positive bias, and I believe that this move should have a good follow-through higher.

Gold has broken out. Technically, it is very bullish. We have had 6 years of a consolidation that has now broken higher. To assume anything less than a massive move higher in the coming months may be a mistake that many traders may make in the near future. We will have pullbacks and consolidation, but the reality is as long as we trade above the 1370 level the risk is for higher gold prices ahead.

Let’s talk about the charts. 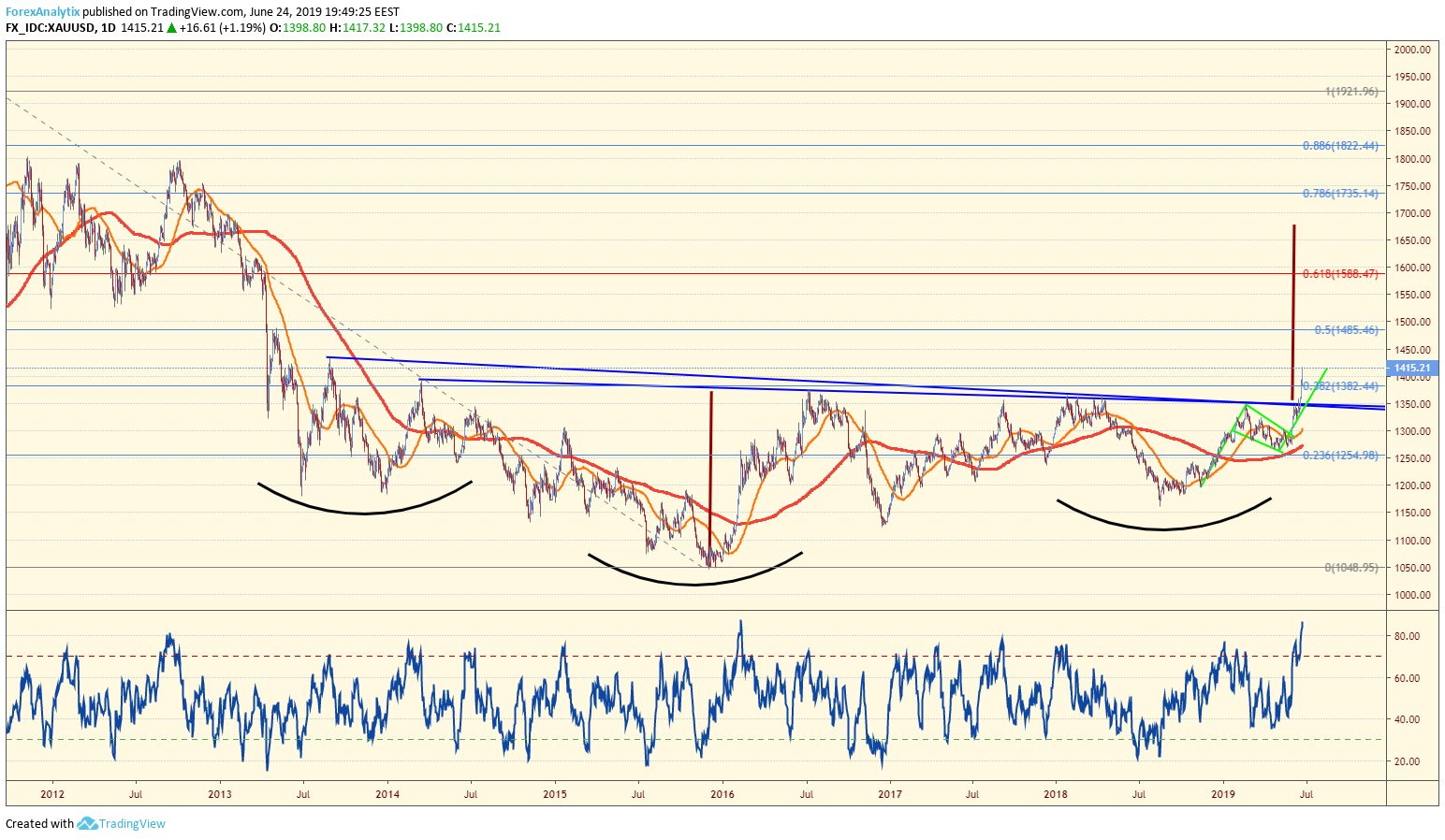 First of all, let’s talk about the things that could stall the price near term:

As an FX trader, most important for me is how the USD will react in this situation. Most of you know that gold and DXY (US Dollar index) has a strong inverse relationship. As gold goes up, the DXY tends to go down and visa versa.

As you can see in the chart below, gold is breaking higher, and the DXY (orange line chart) looks to roll over as the mirror image inverse relationship takes hold. 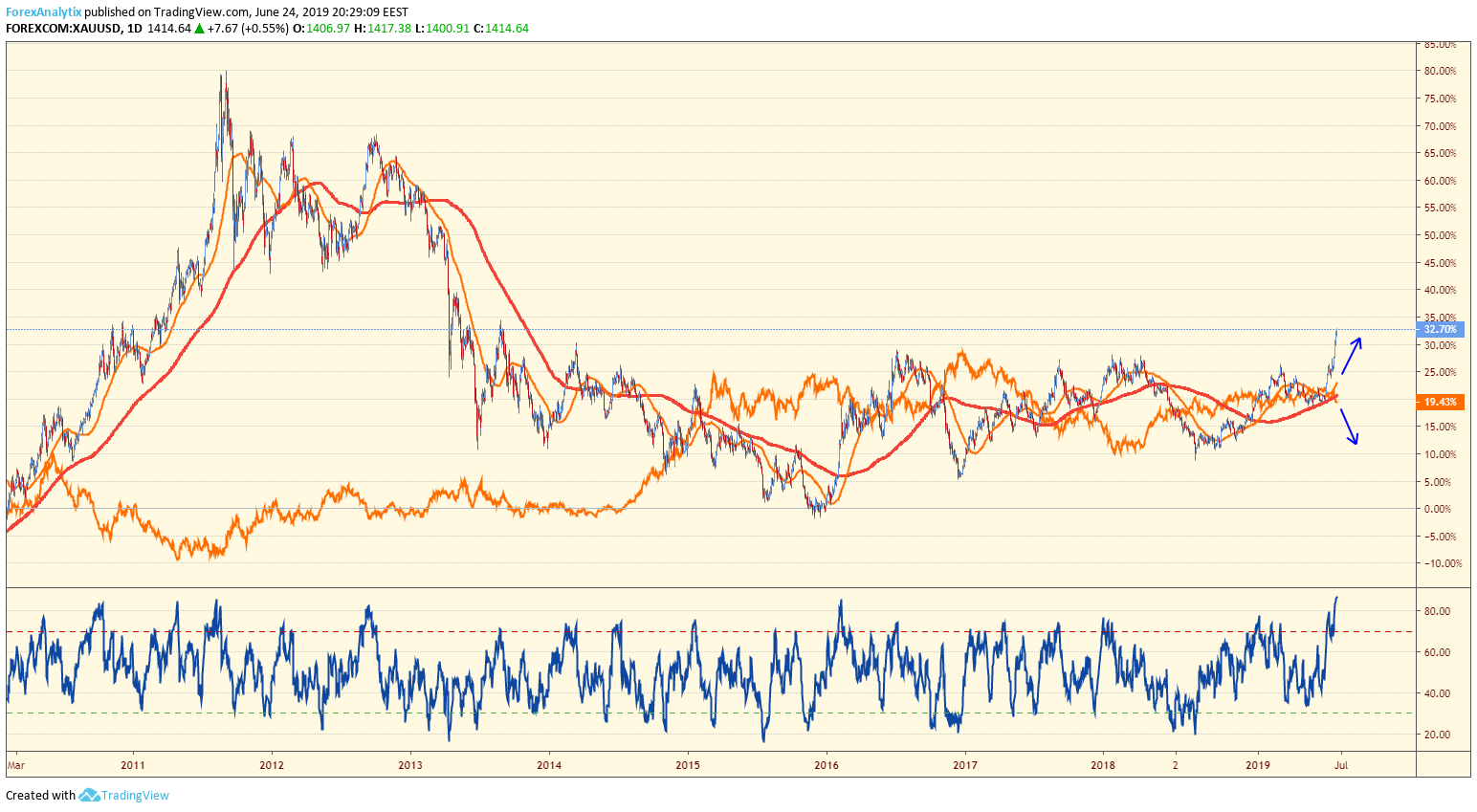